And then there was 100: Dicks Creek Gap to Franklin

This post will be shorter since I only hiked a few days to get to my first official zero day in Franklin but it only seemed fitting to document the first tiny milestone of 100 miles.

When I last left you all I was heading into my first resupply in Hiawasse. We planned it so we could get to the trail head around lunch time.  We arrived at the trail head around lunch and were lucky enough to catch the budget inn shuttle into town.  Once we got to town we had to find some where to eat and make up for all the calories we burned.  We found the first buffet on the way to our hotel and as one once said ate like it was our job. Afterwards we made it to the store to re supply  and got a ride back to our hotel from as gentleman that was helping organize a large veterans hike of the AT. We spent the night in the holiday inn luxary thanks to some uncashed in hotel points ounce had. After eating four plates of holiday inn breakfast we were walking back to the trail head when a guy offered us a ride back to Dicks Creek Gap. Souther hospitality at its finest thanks Tim!

After getting back on the trail head early we made the 11 mile trek to the Muskrat Creek shelter and made camp for the night. It was a nice shelter but it was crowded so we camped just beside it. This day was great because we got to celebrate finishing Georgia and heading into North Carolina. If the AT was an amusement park ride those North Georgia mountains are definitely the admission fee. It was vary apparent to me why those sections cause people to quit. Muskrat Creek shelter below. 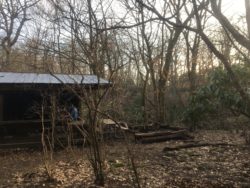 We woke up early to try to beat the rain out of camp and for the most part did. It was sprinkling a little but not bad. As we walked it got worse and worse. At lunch time we got to Standing Indian Shelter at it was too bad to keep going so we hunkered down to wait it out.    Tons of other thru hikers and day hikers joined us at one point we had 29 people taking cover in the shelter attempting to stay dry. After the storm settled those of us that arrived after shelter spots had been taken got to set up camp. I got an OK spot but the night was not without challenges.  In the middle of the night I discovered that the cheap rope I used for drip traps on my hammock had came loose and my head end was now wet. I got up and tied a few knots in the whoopie sling that did the job the rest of the night. 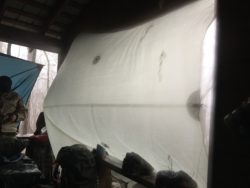 After a forced Nero we decided to get a good 16  mile day in. This day was great weather and we also got our 100 miles down. A pretty big accomplishment at this point in the game. 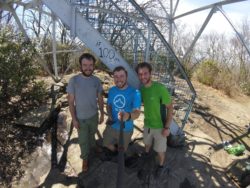 After our stay at the awesome long branch shelter we made the short 7 mile hike to get to the shuttle to Franklin North Carokina where we ate and enjoyed our zero day away. My highlight was sending 3 lbs of stuff home we will see if it was 100% the right choice later on.   Still having a great time. 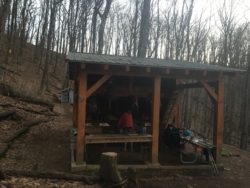 That’s it for now.

– Two Speed ( my trail name due to the difference in the speed in which I get ready to hike in the morning, slow, versus the speed I hike after coffee, not slow) given to me by the guy I hike with ounce, the guy who cut the corners off his sit pad to save weight.