14 Things I Wish I Knew Before Hiking the AT

Looking back on my Thru-hike, there are very few things I would change.  That being said, this is a list of the things I wish someone had told me before I left.  They aren’t the normal warnings.  I had plenty of people warn me about certain death, bugs, lunatics, and your standard everyday dysentery, but there were a few warnings I would have liked to have heard more or simply listened to better.  If you’re planning an AT hike and want some unsolicited advice that you might actually be able to use, try this list. 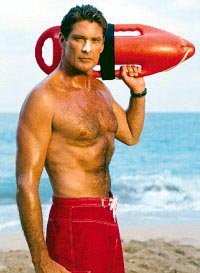 It doesn’t matter if you bronze up like a shiny leather lion at the first sign of sun rays.  Even if you are such a rich ebony that you fail to trigger motion detectors in the dark, you will still want to save your pigment at the beginning of the trail, where trees are completely leafless and the bright Southern sun is beating directly down on you for eight to ten hours a day.  The green tunnel that you have undoubtedly heard about comes later.  Much later. 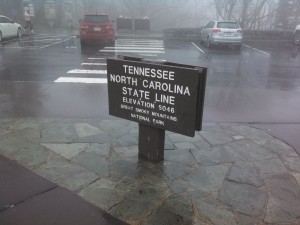 I don’t mean ‘camp in the rain.’  I mean go to your local YMCA, set up your tent in the locker room, aim all the shower heads at it, and play solitaire inside while a friend turns them on.  That’s what Georgia felt like. 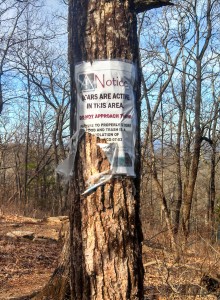 As with most useful advice, this one has a story behind it.  There is a bear outside of Neels gap who is a genius.  He can, and will, get your food.  Every other bear on the AT is a big, dull witted raccoon compared with this maverick.  The only way to beat him is to hang your bag with a stick tied into the rope, so that if it is cut down by sharp, clever little bear claws it will catch itself and dangle hopelessly out of reach of that Ursine MacGyver.  Then he will take your neighbor’s food instead.

Fortunately for us, we had this warning.  Our food was blissfully undisturbed in the tree while poor Uncle Melty, residing two tents away, lost everything but some sad instant mashed potatoes.

He is reported to favor marshmallows so it’s possible that type 2 diabetes has ended his gluttonous kleptomania by the time you read this article, but if you don’t take precautions you risk hiking back to Mountain Crossings the next morning and buying a lot of overpriced Clif bars.

Which brings me to:

4. Don’t expect too much from Neels Gap. 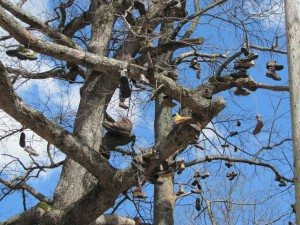 The first real ‘place’ you come across, Neels Gap is incredibly useful in a pinch, but not intended for a serious resupply.  You should take advantage of it to receive a package and to mail home gear, but ideally you shouldn’t have to depend solely on Ramen to make it to Hiawassee. 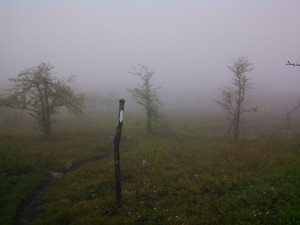 As a previous bike tourist, I thought ‘rain pants are silly; you just sweat inside them and get wet anyways.’  But when you’re hiking, rain pants can make the difference between a good day and chafed thighs.  And in North Carolina, in April, you are more likely to prevent hypothermia than to sweat in those pants.

6. Diaper cream: it will save your ass. 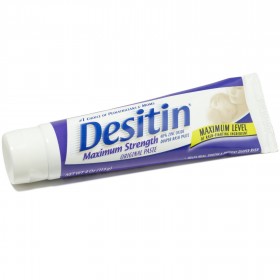 Honestly.  You can laugh now, but when you feel the forgiving kiss of Desitin on that burning monkey butt, it is like a choir of angels has blessed your posterior. 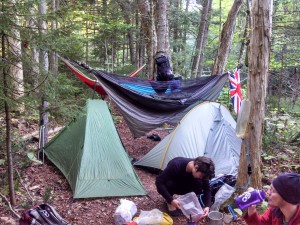 My personal nickname for a 6 X 4 foot enclosure designed to house a couple is a ‘divorce tent.’  I have seen people break up over dirty dishes; Try slapping each other in the face and spraying frigid water droplets around while you struggle into greasy long johns.  This experience brings a dark reality to ‘for better or for worse.’ 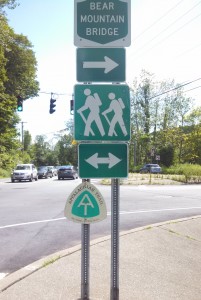 One of the reasons I switched from cycling to hiking was because I imagined there was a lot less traffic.  On those long bike rides uphill, inhaling exhaust, I pictured myself on the AT, walking through pristine forests unblemished by modernity.

I was conveniently overlooking the reality that in order to make a 2000 mile linear path across the US, there are a lot of roads that need to be crossed.

The reality is that cars are a big part of life on the AT.  Whether you are catching a ride from a kind passer-by or running across the Palisades Parkway in a terrifying game of Thru-hiker frogger, you are interacting with these steely beasts on a near-daily basis.  Even in the middle of the Hundred Mile Wilderness, our lunches were occasionally interrupted by the distinctive sound of logging trucks backing up.

I realized that if I wanted to completely remove vehicles from my life, I would have to go to a different country altogether.  Instead, I learned to appreciate the symbiotic relationship between hikers and drivers on the trail.  After all, at the end of a long rainy walk into town, there were people with magical machines who were willing to transport me to hot food for the price of a good story.

9. Not everyone gets what you’re doing. 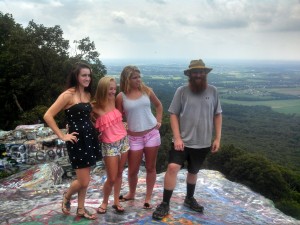 Being from the White Mountains area, the section of AT notoriously known for testing the mettle of accomplished hikers, I assumed that everyone thought each Thru-hiker was a brave-spirited Adonis who sweats accomplishment instead of body odor.

This is slightly different than the Mid-Atlantic areas of the country, where Thru-hikers can occasionally be mistaken for something else called ‘homeless.’ 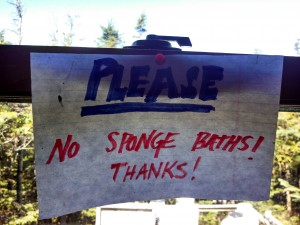 There are some slight differences between the two labels; namely that hikers actually smell much worse than homeless people and also that they choose to do so.  Unfortunately, this distinction only serves to further the negative opinion of most urbanites. 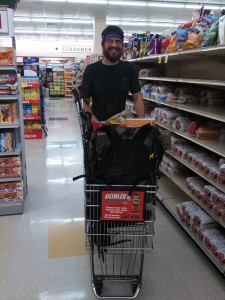 In short, always be aware of your surroundings and don’t depend on your label to protect you or explain your circumstances.  We met quite a few people who had never heard of the Appalachian Trail.  Once we explained what we were doing, they were friendly and impressed, but up until that point they were a little wary of the smelly, dirty, unkempt strangers in the woods.  Don’t let basic misunderstandings color your view of these states when a little explanation can go a long way. 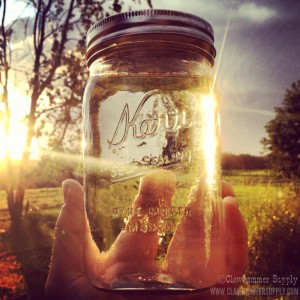 When people talked about Moonshine on the trail, I usually pictured pigpens adjacent to dirty bathtubs or old clay jugs marked with triple X’s.  And based on my experiences with normal hard liquor, I expected drinking grain alcohol to be like swallowing a flaming hellcat.

I avoided the glass jars with their mysterious floating fruit for several hundred miles before my own (usually self-injurious) curiosity compelled me to try a sip.

It was the best thing I ever tasted.

After that belated taste of sweet, fruity goodness I never forgave myself for passing up previous opportunities.  Don’t be like me.  When presented with something new on the AT, embrace it with an open mind.  You might get a mouth full of hellcat, or you might find yourself sipping the nectar of the gods. 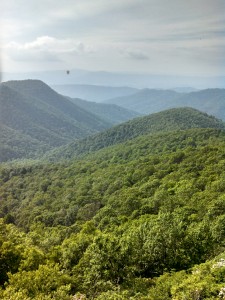 People who tell you it is fit into one of two categories:

1.  People who have not hiked in Virginia.

12. Maine is horrible at first. 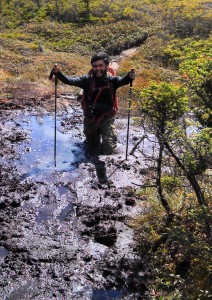 Let’s talk about something that few people mention.  The topographical map leading from New Hampshire into Maine looks flat. It does not, therefore, accurately depict the slick slab climbs, the boulder fields, the cliff edges that simply end in a sheer drop off, the bottomless bogs that try to suck you into their primordial muck, or the endless complaining of your defeated compatriots.

You might be like me and think the worst is over after the town of Gorham, where you leave the majestic White Mountains behind and embrace the last state: Maine.  At this point in the trip, you are a little desperate to finish, so you delude yourself.

You will tell yourself, while scaling a vertical New Hampshire Cliffside in the rain, that Maine’s trails are lined with soft needles.  Maine is overflowing with beautiful sweeping switchbacks that trail off as far as the eye can see.  There is no rain there; only sunshine, warmth, and crystal clear springs from which whiskey bubbles up unbidden.

These things are not true, and you need to accept that to enter Maine.  In the section out of Gorham, you will be brutally abused.  You will be attacked by the Furies for your sins.  You will descend into a hopeless abyss of madness.  Every self-doubt you have dismissed up to this point will return tenfold.

What do you do?  Plan at least four days of food and do not give yourself the option to quit. 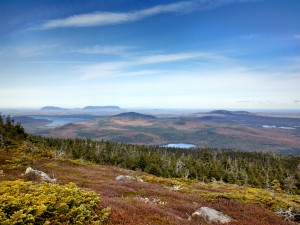 After the initial kick in the teeth that Maine gives thru-hikers, it gets progressively better and easier right up to Katahdin.  Its majesty, romance, and wildness rivals everything you have seen so far.  You will have more wildlife sightings than any other state and, unlike in Georgia, North Carolina, and Tennessee, you will actually be able to enjoy the wild beauty instead of being stampeded by hundreds of other hikers at every outlook.  The trail crews are fantastic and you will most likely run into several of them.

Whiskey does not, unfortunately, bubble forth from the earth, but the land is full of crystal clear blue lakes replete with hidden sandy beaches and even a few public use canoes.  When I begin to miss the trail, it is those starry campfire-lit nights by the water in Northern Maine that feed my nostalgia. 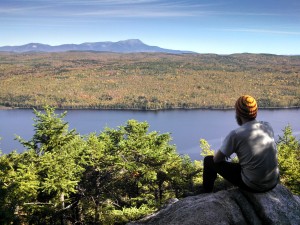 We were so wrapped up in the idea, ‘what if I don’t make it?’ that we were almost afraid to have fun at the beginning.  The AT is not your job.  And no one can say anything to change that.

If you believed what people said anyway, you wouldn’t be standing on Springer.