Finding Lost on the Long Trail

My name is Taylor and I will be your conductor on this literary train ride through the Vermont wilderness on the 273-mile Long Trail from Canada to Massachusetts. All aboard for a suffer-saga narrated by yours truly. You may be wondering, who is your narrator?

I’ve arrived at that great twentysomething age where I realize I still have no idea what I want to do with my life, who I want to be, or what I want to accomplish. So I’ve felt a little adrift, a little lost.

When I mentioned to my mother that I was going to thru-hike the Long Trail, she told me I was lost.

I told her I wouldn’t get lost, I’d be on a trail. She replied that if I was in the middle of the wilderness, I was lost. So I threw up my hands and agreed.

In the woods, I can be whoever I want to be, so I’ll be Lost

So I set out to find Lost, whoever she is. I made my plans and organized my resupplies. My planning looked a little something like this: 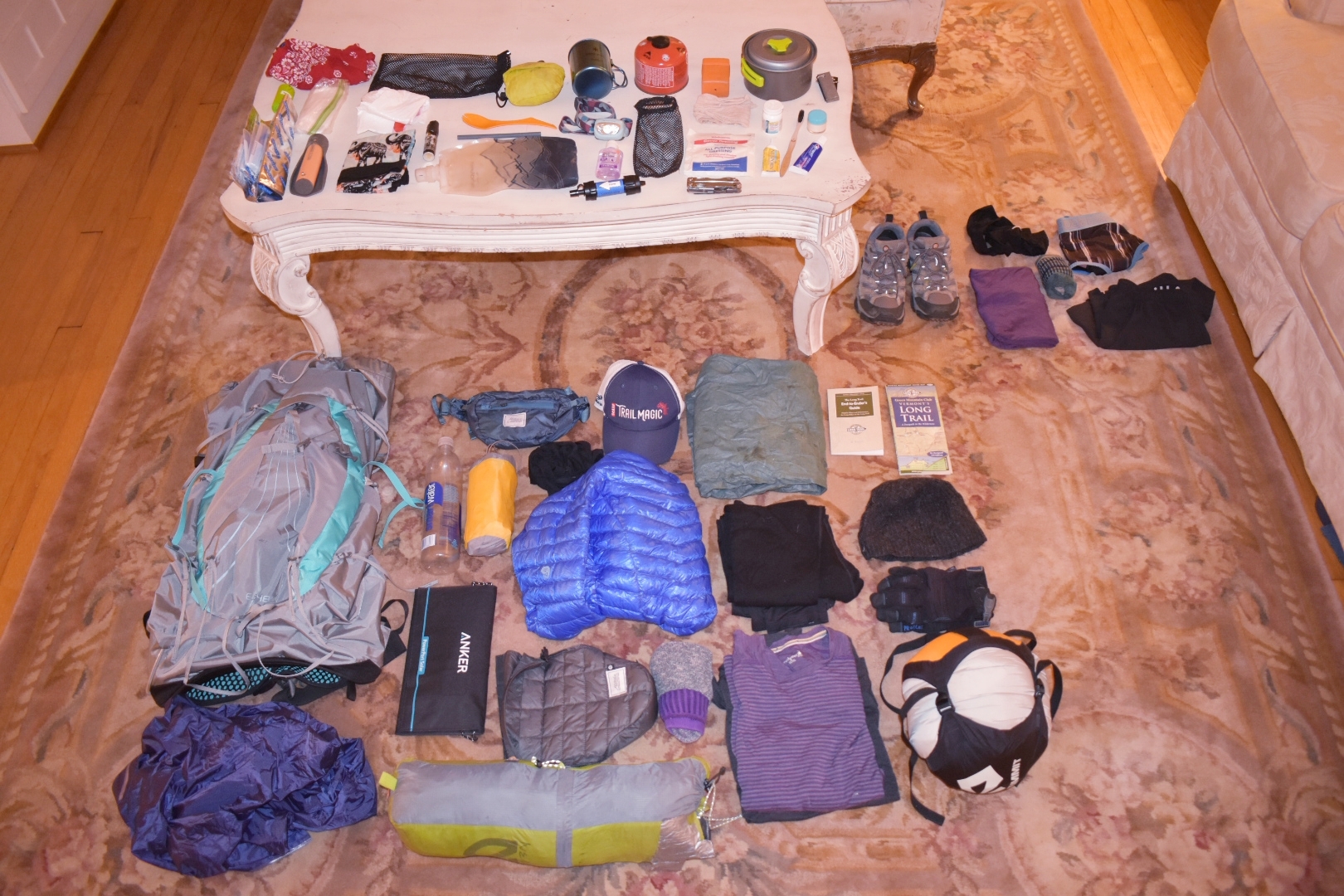 I had to figure out what gear I needed. I’ve never really been backpacking before, but I had some gear already. I wanted to use what I already owned as much as I could to cut down on cost. I did have to purchase a pack (an Osprey Eja 48) as well as a new puffy jacket (Mountain Hardware Ghost Whisperer). If you want to know more about my gear head to the gear list page.

I weighed everything and went back over my list again and again. What did I really need? What was a luxury? This can be a difficult part of getting ready for a long trip. I have found that often you may not know exactly what you don’t need until you’re actually hiking. Remember, you can always send stuff home if you find you aren’t using it.

I think gear can be overwhelming to a new backpacker. The best advice I have is to read about what other people need or use and make lists. That’s what works for me.

I researched how long the Long Trail usually takes to complete. I found a lot of varying results, but decided based on a conservative estimate that I could probably complete the hike in about 25 days. I split the trail into five approximately equal sections of 50-60 miles each, with a town in which I could resupply at the end of each section. That way I only needed to carry five to six days worth of food at a time. I decided to resupply in the towns of Johnson, Waitsfield, Killington, and Manchester Center. The Long Trail End to Ender’s Guide was helpful in this part of the planning process, as it gave information on the amenities in each town.

Since I decided to bring Dobby, my dog, with me I decided to send myself resupply boxes in my four resupply towns so I wouldn’t have to find his food in a store. These boxes can be sent general delivery to the local post office or to hiker-friendly businesses. I sent most of my boxes to businesses to avoid the problem of arriving in a town on a Sunday and being unable to retrieve my box.

NOBO, or northbound, means someone who is hiking a trail south to north. SOBO is someone hiking from north to south. The majority of people hike the Long Trail from south to north. The southern portion is a bit easier, and so you can spend your first few weeks getting your hiker legs before tackling the more difficult and rugged terrain in Northern Vermont. Because my schedule allowed for an October hike, I chose to hike SOBO. This decision was partially influenced by wanting to see the peak leaf color change and also by wanting to avoid snow in the northern section.

Toot toot! All aboard and let’s get hiking.