Then there was 200: Franklin to Gatlinburg

When the update last concluded I was in the awesome hiker town of Frakilin, NC. I highly recommend this trail town to zero or just stop in. The shuttles get you in and the business cater to hikers to some extent. It has cheap lodging and is home to a few breweries as well. The morning before we left we got picked up at our hotel and taken to a free pancake breakfast for thru hikers at the first Baptist church. It only happens certain times of the year but its awesome and highly recommend. After we were pancaked up we took the transit hiker bus back to the trail head. We had heard there was some bad weather and several veteran hikers decided to take another zero but we were ready to hike!

We set out from the shuttle bus with a little chill in the air. It was apparent that there remainder of the cold weather remained in the upper elevations where we were headed. We hiked on an eventually found the snow and slush on our way to the shelter. We pushed and reached Cold Spring Shelter later in the day. When we arrived there were people on the  shelter that has spent a zero day in the shelter waiting out bad weather. We took our stuff and trudged to the camping spot conviently on top of the ridge away from any wind break at all. I cooked in my tarp and went to sleep to stay warm. I slept warm due to pitching my tarp low and my hammock setup but it was a chilly morning coldest on trail so far. 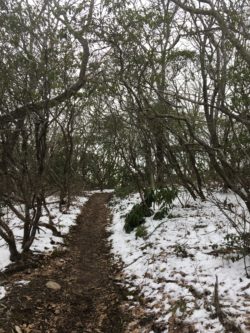 After a night of chilly camping we got up and ate breakfast again behind the cover of our tarps. We set out to camp slightly before you get into NOC but when we got there the sun was still out and we could practically smell town food so we pushed a pretty big day for us to make it to NOC and eat at the restaurant there. I ate twice picked up my package and then turned in to the bunkhouse at NOC. The chilly night was in the past and we were ready to go! 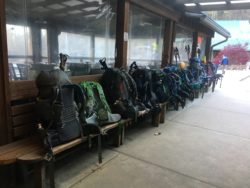 The next day after a bg breakfast from the NOC we made the climb out of the valley the weather was nice and the hiking wasnt to bad either. We hiked a little ways then camped at locus cove gap for the night. 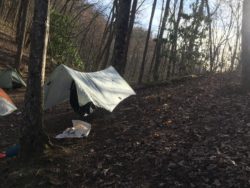 The group I was hiking with woke with plans to camp right before Fontana and go in the next day but we got within striking distance and once again ended up in Fontana eating at three restaurant. I ate picked up my package from the resort and then went back to the marina trail head to night hike that 1.8 to the Fontana Hilton. We got in late so we slept in the shelter. It’s a really nice shelter with great extras but it was a little too crowded for me and I was ready to head into the smokies to escape the crowd. 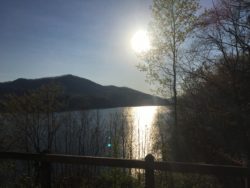 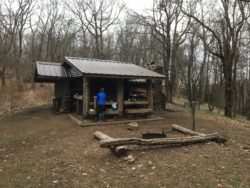 Our next day in the smokies was full of great hiking and views when we got to the shelter it was full so I got to hammock. 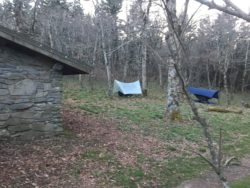 Probably the best days of the hike we got 200 miles and also did a night hike in the morning to watch the sun rise on Clingmans Dome after  that we rolled in to Gatlinburg for a zero which  is where we are but we head out to finish the smokies tomorrow. -Two Speed 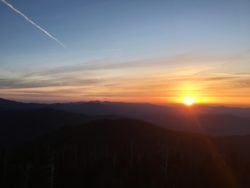