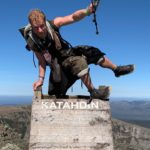 I’ve been on trail for around two and a half months now. I’ve met a great many kinds of people, and I’ve learned a few things over the many miles I’ve walked.

One question that I have been asked several times, by other thru-hikers and civilians alike, is why I decided to start such a lengthy hike. This always strikes me as odd because, to me, there need not be some grand reason to do something extraordinary even if you lack a logical explanation or overall goal for that action.

In lieu of that question, and since I have already answered that in a previous blog post (https://thetrek.co/appalachian-trail/an-introduction-and-why-im-hiking-the-appalachian-trail/), I wanted to present an alternative mode of thought: that being thru-hiking is actually quite healthy for you.

In order to prove this, I feel it necessary to mention some of what I have been discovering throughout my journey with 5 benefits of thru-hiking.

As I’ve progressed in my hike, I have realized that I’ve become much more aware of what my body needs. Not only can I feel when I am hungry, I can also distinctly correlate the quality of the food I intake to the amount of energy I gain from it. I attribute this both to a loss of body fat and to the amount of work you are required to put into each day.

On top of this I can tell, without a doubt, when I am dehydrated, need electrolytes, have had too much sun, have been pushing too hard for too many days, et cetera. You learn to read your body in a way you were previously unable to.

You also learn to push and when you can get away with it.

This one is fairly straightforward. When you are out here for a while, your thoughts come in much clearer. I notice that, without integrating myself into the hubbub of everyday modern life, I am much less scattered and can actually attend to things I think are important.

To that point, what you think about out here is what you care about in the “real world”.

I find myself able, with ease, to follow a line of thought from beginning to end without irksome interruptions and half-related discourses.

This brings us to my third point:

3.) What Matters and What Does Not

More out of necessity rather than choice, a thru-hiker is a minimalist.

If you carry things you want rather than things you need, you risk becoming overburdened which, at best, slows you down exponentially and, at worst, leads to physical injury. Out of this, you come to understand that very few things are necessary for survival and, by extension, happiness.

You learn to carry everything you need on your back and that becomes enough.

As I alluded to in the previous section, very few things in life are actually as complicated as they seem. I spent a lot of time in “the real world” being overly frustrated at things I couldn’t change or things that did not matter. Out here, you plan your day around weather, scarcity of water, amount of food you have, and so on.

If you’re smart you have a plan B.

Even then, some extraneous variable can sometimes come into play.

Things change quickly in the mountains, weather flip-flops without much warning, terrain is sometimes easier or more difficult than it looks on paper. In times like these, you sometimes have to throw your plans out the window. You learn to adapt and overcome.

Through this, you come to find that, with a little bit of experience, perseverance, and mastering the art of keeping calm when it all hits the fan, things are just a lot more simple.

I’ve also come to realize that the things we swear are extremely important in modern life—politics, the latest news, the newest fashions, social media, anything but living and breathing—are truly just extraneous portions of life we’ve invented chiefly to keep ourselves entertained. In reality, it simply keeps all of us over-stimulated and on edge.

Over the past few months I’ve heard precisely nothing of what is happening in “the real world” and, frankly, it would be an impossibility for me to care any less than I do.

It’s so quiet out here.

It’s true that there are a lot of other people around you on the Appalachian Trail, even if you are hiking alone. If you needed to, you could find help fairly easily in an emergency. That said, you are still wholly responsible for yourself.

You choose and carry your gear, you make the final call on what to do with an injury, you decide when to stock up on water or not. If you make the wrong decision, the burden of damage control falls on your shoulders.

Sure, there are gaps in the trail where you can hitch a ride to civilization every now and again but, sometimes, they are few and far between and you still have to rely on yourself to make it there. When your decisions can make or break the seriousness or severity of the outcome, you come to trust yourself a lot more.

I was coming off of Roan Mountain some weeks back. I had left the shelter at the peak early in the morning because it was very cold and a storm was scheduled to roll in around 9:00 AM. I wanted to get to the next shelter before things got dangerous.

The storm broke early and, by the time I had gotten to the shelter 5 miles down the mountain, freezing rain was blowing sideways into said shelter. I was with a few other people with whom I ate a quick breakfast for some energy and then we all pushed on since the shelter had become useless.

After the shelter, there were three balds before the elevation dropped enough to where I figured there was a chance the storm would be less violent. By the time we reached the second bald, the temperature had dropped, the wind speed had gone up to 60 mph, changing directions as we walked, and it was now sleeting to a point where you couldn’t see but a few feet ahead of you.

The wind was too violent to even consider pitching a tent in order to wait it all out. Stopping for any amount of time led to a speedy drop in body temperature. The only option was to hightail it to lower elevations, which had become very difficult since the wind made walking in a straight line difficult and the moisture made the balds slick with miles of mud.

Nothing went according to the plan I had made at the beginning of the day but, with a few on-the-fly decisions and some serious pushing, we all made it safely to Station 19 Hostel where we were able to warm up, take hot showers, and launder then dry our clothes. It was worrisome in the moment, but now just makes a good story.

The trail forces you to rely on yourself and, sometimes gently, sometimes harshly, corrects you until you’ve gained enough knowledge to where you can trust yourself in just about any circumstance.

There have been several studies on the effects of thru-hiking on veterans suffering from PTSD. The general consensus is that there are numerous positives for doing something like this. I understand that on a more acute level now.

Not only is this the ultimate freedom, it’s the opportunity to experience the keenest sense of silence.

You structure your entire existence yourself and choose what you get out of it.

To read more of my content, visit my page.