In April of 2010, I received the devastating news that my son Cole had cancer. He fought bravely for a year and a half through all efforts to save him, but sadly lost his battle on January 20th, 2012 at age 5.

Cole left behind an identical twin brother named Troy, his sister Tara, my wife Michelle and I, and many others who loved him deeply.

Cole was an amazing young boy who loved the outdoors, from the moment he woke up each day he would ask us if he could go outside and play in our yard, climb in the trees, or hike in the woods that surround us in New Hampshire. His energy was boundless, and his passion for life was immense. 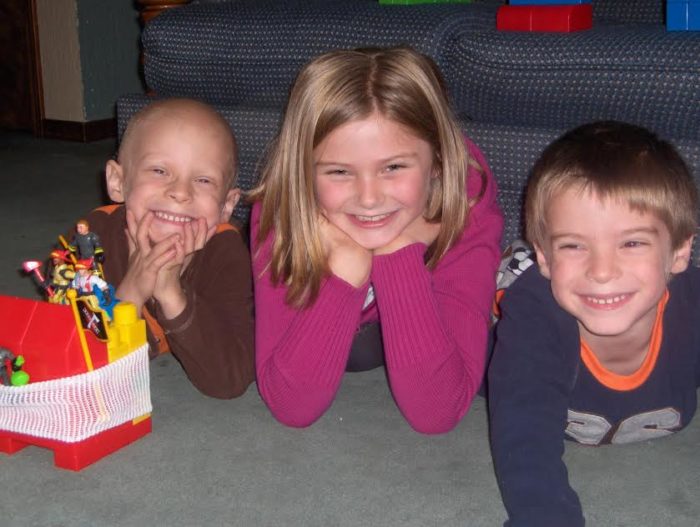 Even after he began chemotherapy and radiation treatments which sapped his energy, he found great pleasure in being outside playing in the Autumn leaves or in Winters snow.

Cancer stole that from my son and robbed us of all the joy he brought to our lives each day.

Shortly before my son passed away, I was sitting beside him in the hospital bed and I asked him if he still wanted to be a firefighter or policeman when he grew up, he quietly responded, “I’m not going to grow up to do anything.” I fought back the tears upon hearing those words and promised him he would do “Something Big” someday. He asked me what that would be, and I replied. “I don’t know yet but you will do something big!

Nine months after my son died I was helping my wife organize a fundraiser for kids fighting cancer in September and I suddenly realized it was Childhood Cancer Awareness Month. I said to her, “There is practically nothing letting people know that this month is dedicated to kids affected by cancer.”

The gold ribbon is the symbol of childhood cancer awareness, but we hardly saw it displayed anywhere.

At that moment, I realized how I would keep my promise to Cole that he would do “Something Big” I would share the story of what an incredible boy he was, how bravely he battled cancer, and in his memory I would do all I could to help turn September  gold during Childhood Cancer Awareness Month like October is pink for Breast Cancer Awareness Month. I was certain that with greater awareness of the #1 killer (by disease) of children in the US, would come an increase in funding and research for kids with cancer, giving them a better chance to live than my son was given. 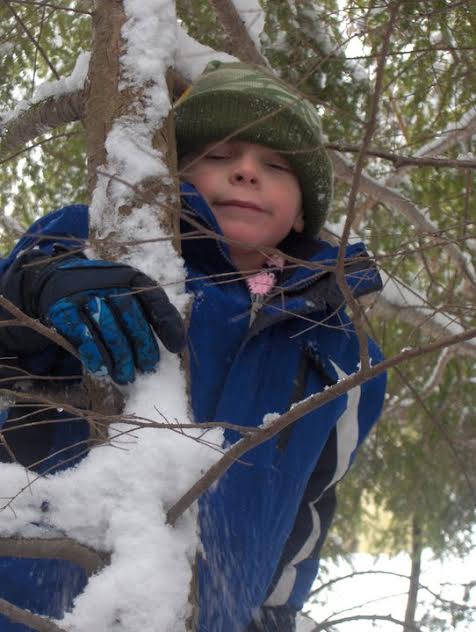 I reached out to officials in charge of lighting bridges, buildings, and landmarks across the United States, shared my son’s story and asked that they light gold in September. I rarely received no for an answer. I was successful in getting Boston attractions such as the Prudential Tower, the Zakim Bridge, and the TD Garden to light gold. Other attractions such as Niagara Falls, the Battleship New Jersey, and even Times Square in New York soon followed.

Other parents who had children with cancer were inspired by my efforts, and soon the “Go Gold For Kids Fighting Cancer” movement began to spread across the United States, and to other countries such as Ireland, England, Australia, and Switzerland.

My efforts on behalf of my son were recognized by professional athletes, political and business leaders, and even caught the attention of White House officials who invited advocates of the childhood cancer community to gather there for the very first time in history to speak up for greater funding and research for our kids.

My son was truly doing Something Big! 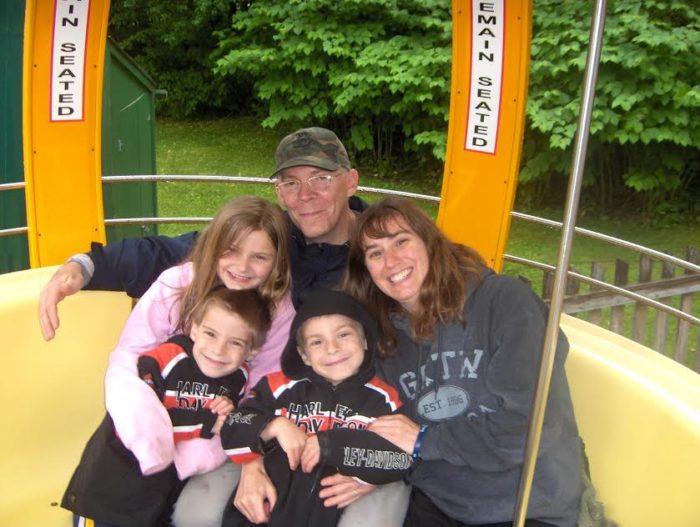 I had made great progress towards keeping my promise to Cole. However, after four years of working towards this goal, I was not satisfied that “Something Big” was big enough. Children continue to die and suffer from cancer in steadily increasing numbers. Each day seven kids in the US die from cancer, and approximately another 46 are diagnosed with this monster, and yet the National Cancer Institute devotes less than 4% of its cancer research budget to childhood cancers.

This past April I struggled to decide what I would do next. I was reading a book written by a father I had met in Washington DC who had lost his daughter to cancer. He lives in the Atlanta, Georgia area and in his book dedicated to his daughter he mentioned that he always dreamed of hiking the Appalachian Trail. I thought, “Is that something I could do?”

I began reading books written by others who have hiked the AT and noticed a recurring theme: there is healing to be found along the trail. Since the moment my son Cole took his last breath, my heart has been broken. Could I too find healing from Georgia to Maine?

I bought a pair of hiking boots, a backpack, and trekking poles and began to hike the trails in my area. I immediately began to find a sense of peace in the woods that I had not experienced in years.

Quickly I graduated from hiking a few miles a day, to five, then ten, and occasionally twenty!

My heart was set on it, I announced that I would begin my attempt to tackle the Appalachian Trail this coming April 15th from Springer Mountain with an end date no later than August 15th on Mount Katahdin. Not only would I be searching for healing, but I would use this journey to help raise awareness and funding along the way!

I was told that finishing this mammoth hike as a novice in just four months was overly ambitious. But a few years ago, I was also told my goal of seeing September shine as gold as October glows pink was unrealistic. I have done all I can to prove those naysayers wrong and I will do all I can to finish my hike in the time I have. I made a promise to my son that guides me every day, and that promise is all I have left to give him. That promise drives me to achieve great things in his name. A promise to a child is a powerful thing! 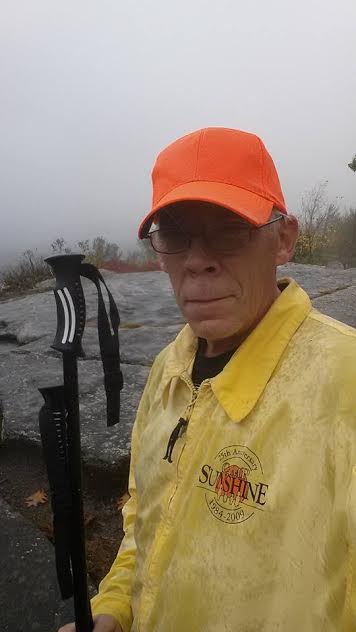 Everett Smith, a fellow childhood cancer advocate and ultrarunner from California, has agreed to accompany me on my hike, and I know that with his outdoor experience my chances of finishing are great. Everett is an amazingly compassionate man who also has devoted his life to helping our kids, and we will push and lift each other to the finish line.

I have heard that it takes approximately 5 million steps to finish the AT, so we are calling our mission #5MillionSteps for kids fighting cancer.

My plan is to raise one dollar for each of these steps, for a total of $5 million dollars to help fight the disease that killed my son and so many other beautiful young souls.

Many other childhood cancer advocates, childhood cancer organizations, friends and family are rallying behind this effort. With the help from members of the media I have come to know I, believe we can spread the word to enough people and raise the awareness and funding that kids battling cancer are so desperate for.

I am also encouraged by the love and support from the hiking community that has been showered on me. Hiking companies and individuals have contacted me offering gear and much-needed advice. I cannot wait to get out on the trail and meet many of you have sent words of support.

Days before Cole was taken from us, my wife and I sat next to his bed crying and holding his hands. He was heavily medicated causing him to sleep most of the day, the cancer had also spread to his mouth creating tumors which made it difficult for him to speak. Suddenly we were stunned when Cole sat up looked directly into my wife’s eyes and mine and spoke strongly and clearly these words, “Smile, Be Happy” He began to lay his head back down but sat upright again and repeated, “Smile, Be Happy!” He then laid his head on his pillow and drifted off to sleep.

That was his final message to us all. A message that has touched many. 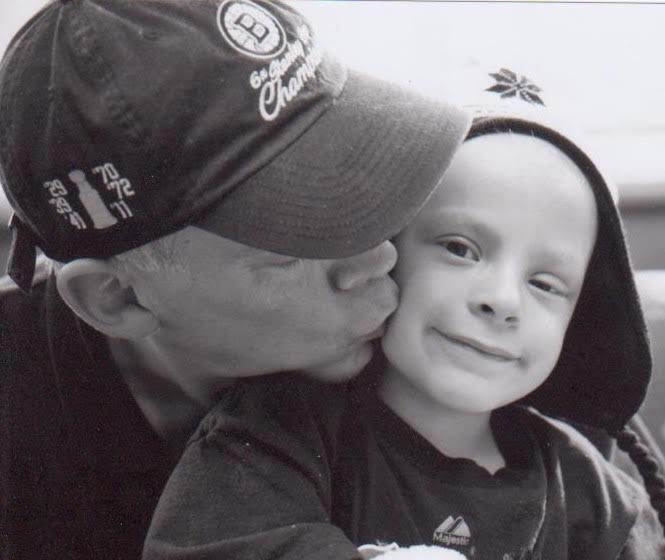 The day before Cole passed away, he was in great pain. He was agitated and kept asking me to sing to him to help soothe his agony. My son, though only five, enjoyed popular music such as songs by Eminem, Usher, Bruno Mars and Imagine Dragons. He used to say children’s songs “were for babies” so I sang to him all the songs he loved that I could remember. After many hours of singing I ran out of ideas for songs to sing, I began singing the theme from the children’s show “Barney”

“I LOVE YOU, YOU LOVE ME
WE’RE A HAPPY FAMILY
WITH A GREAT BIG HUG
AND A KISS FROM ME TO YOU
WON’T YOU SAY YOU LOVE ME TOO”

Cole asked me to sing it repeatedly until he gently fell asleep.

The next morning I went to the hospital cafeteria for a coffee and was called to hurry to Cole’s room. Cole was dying. I rushed to his bedside, held his hand which was growing colder by the second and knew I only had mere moments left with him. He was fighting and struggling to breathe, he loved life so much and did not want to let go. I began singing the words to Barney’s theme song and suddenly the most beautiful smile appeared on my son’s face…and then he was gone.

Since then; every morning, I go to a quiet place and sing this to Cole:

“I LOVE YOU, YOU LOVE ME
WE’RE A HAPPY FAMILY
WITH A GREAT BIG HUG
AND A KISS FROM ME TO YOU
WON’T YOU SAY YOU LOVE ME TOO”

If you hear a grown man singing this on the trail this coming Spring and Summer, you know you have met Cole’s Dad.

To find out how you can help support this journey, visit WWW.SOPHIASFUND.COM and click on the “Epic Fundraiser” tab

Updates on Appalachian Trail Closures Due to COVID-19