The Most Beautiful Spots from Our 290-Mile Hike Through Switzerland

While preparing our adventure in Europe, especially the crossing of the Alps, we planned to walk a few hundred kilometers in Switzerland, the ultimate mountainous country. Neither of us really knew the country, so we arrived in Switzerland without being too prepared for what was waiting for us. When you prepare a 6,000+ mile thru-hike, you cannot plan everything… fortunately. During our trip, the unforeseen and improvisational parts are just as important as the planned parts, and that’s how we like it.

Here is a selection of the five most incredible parts of our hike through Switzerland.

The Glishorn: The Most Beautiful View of the Valais 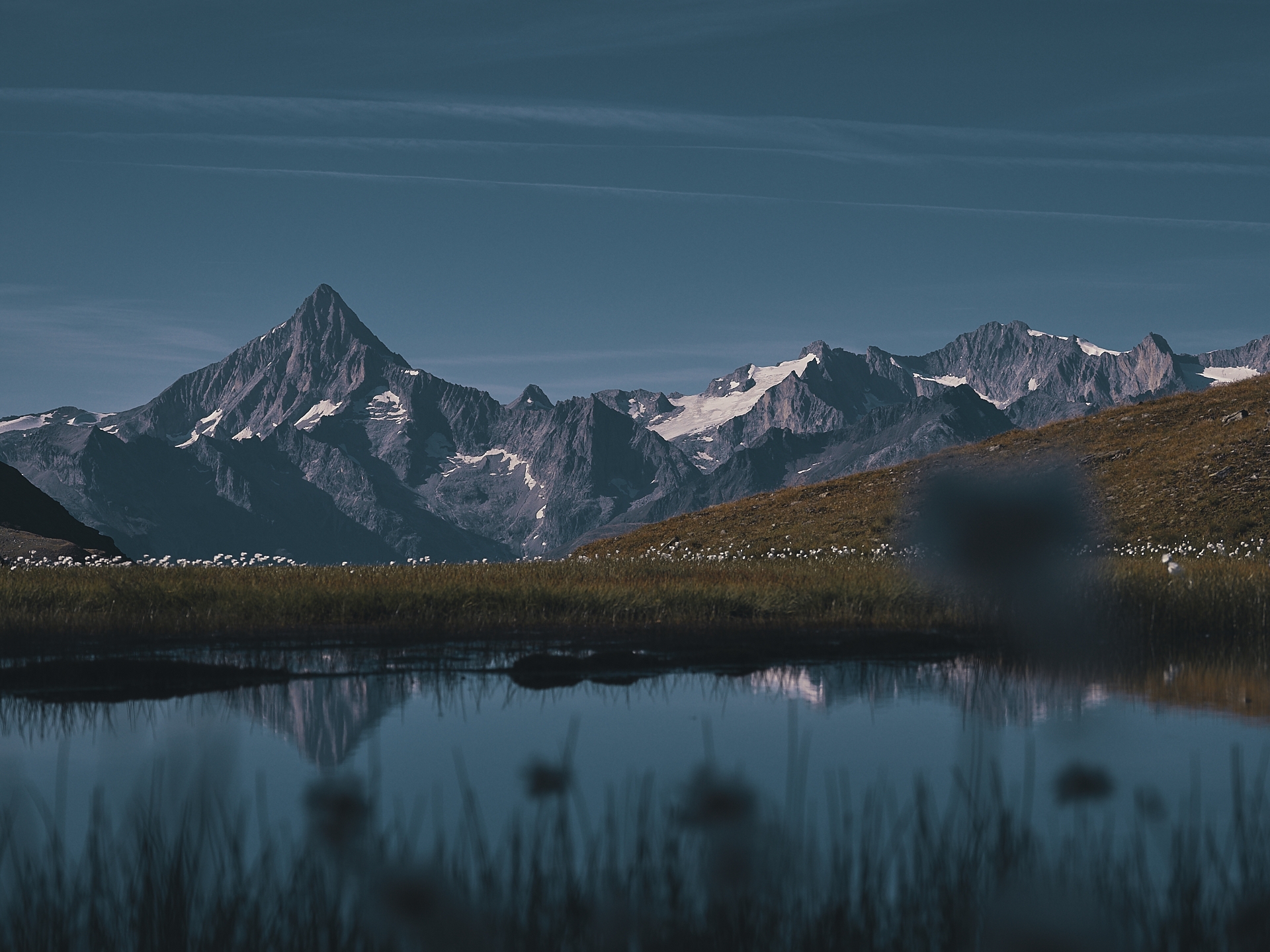 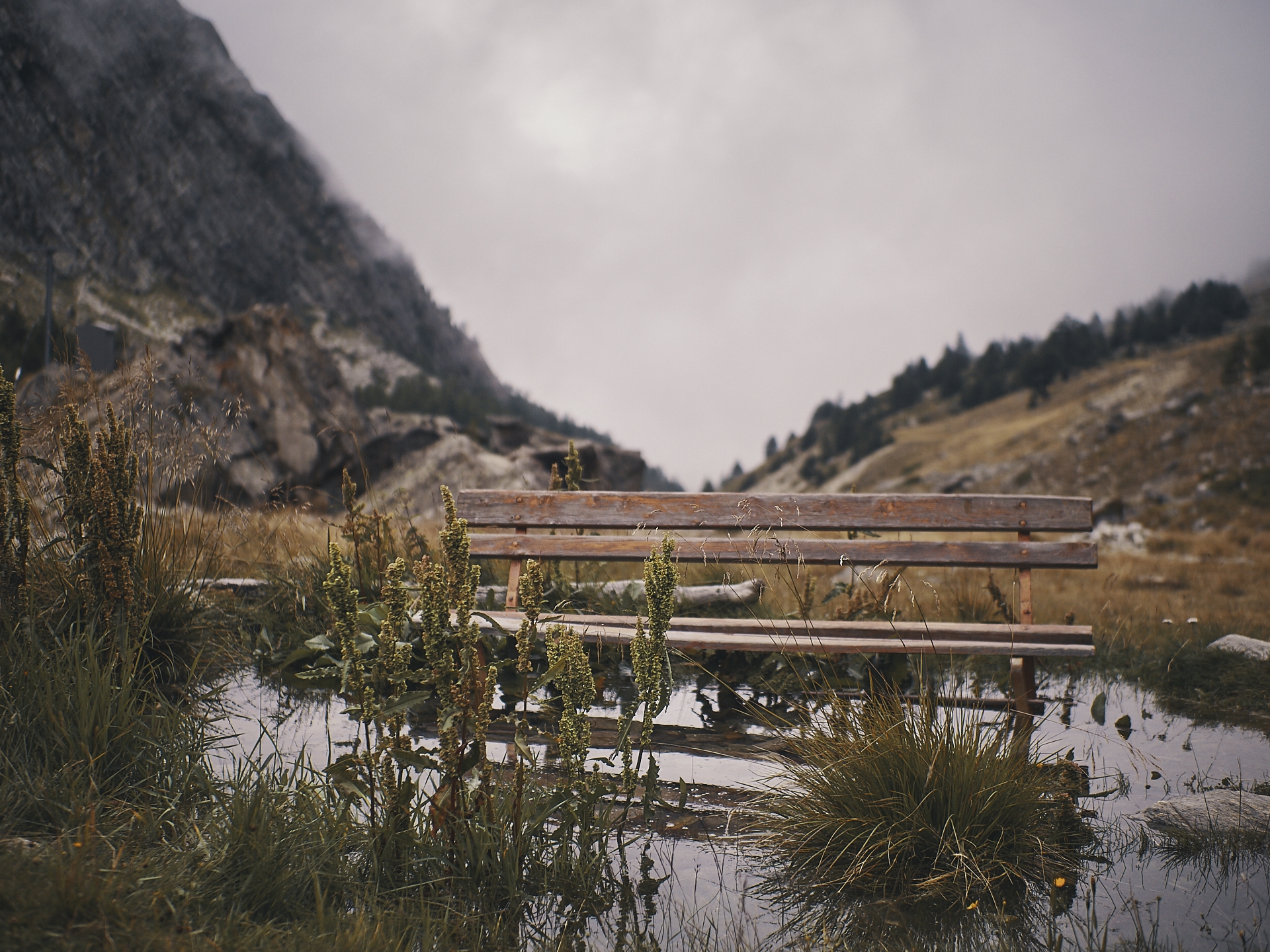 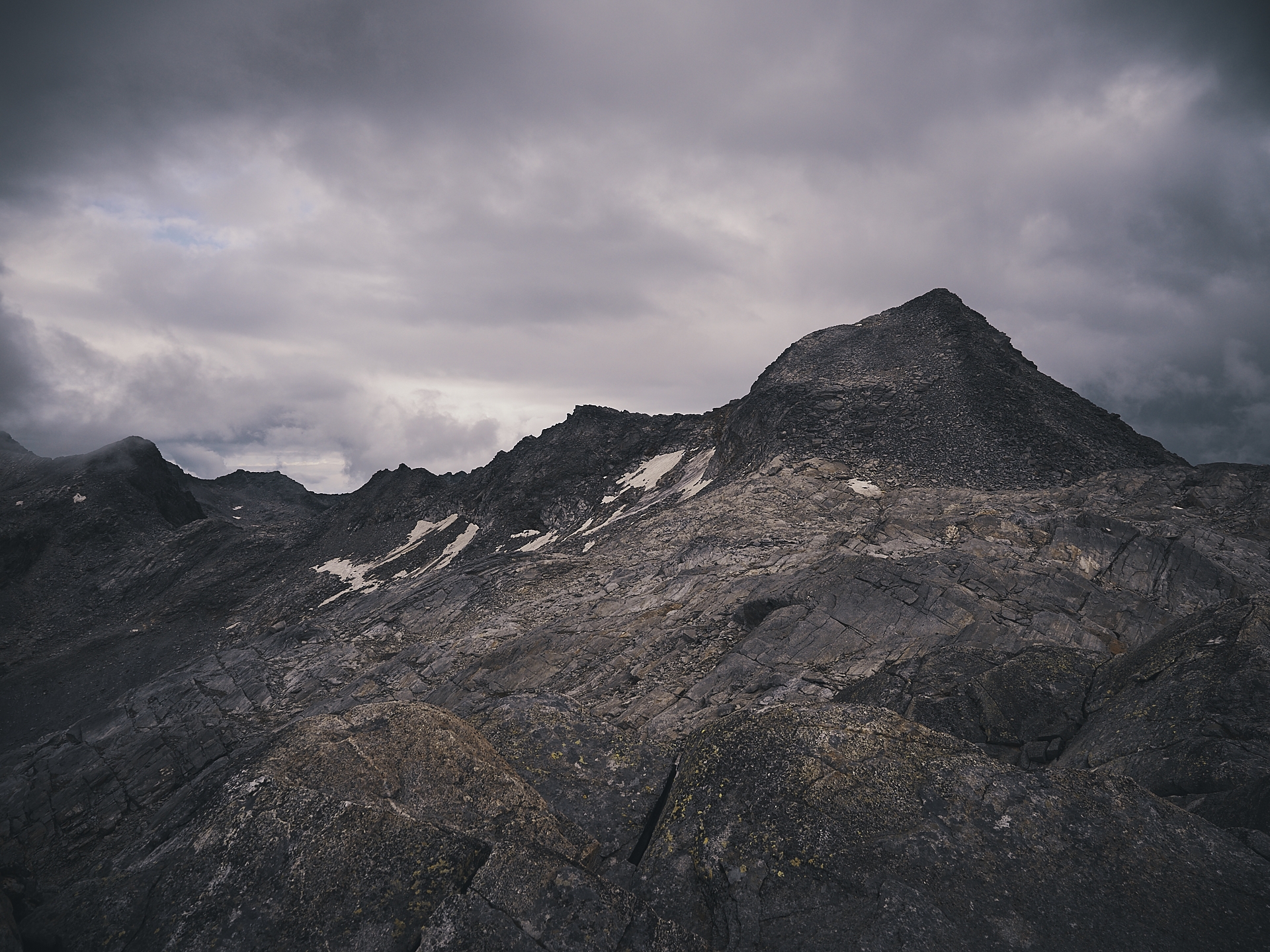 From Italy, we went up to Monte Moro, where we crossed the Swiss border. Another border materialized with nothing but a pass. When we got to the Valais, we did not know that this canton was divided in two: we were in Upper Valais and they speak… German. Well, Swiss-German. Oops. Naively, we thought that the part of Switzerland bordering Italy would be Italian speaking. Fail. 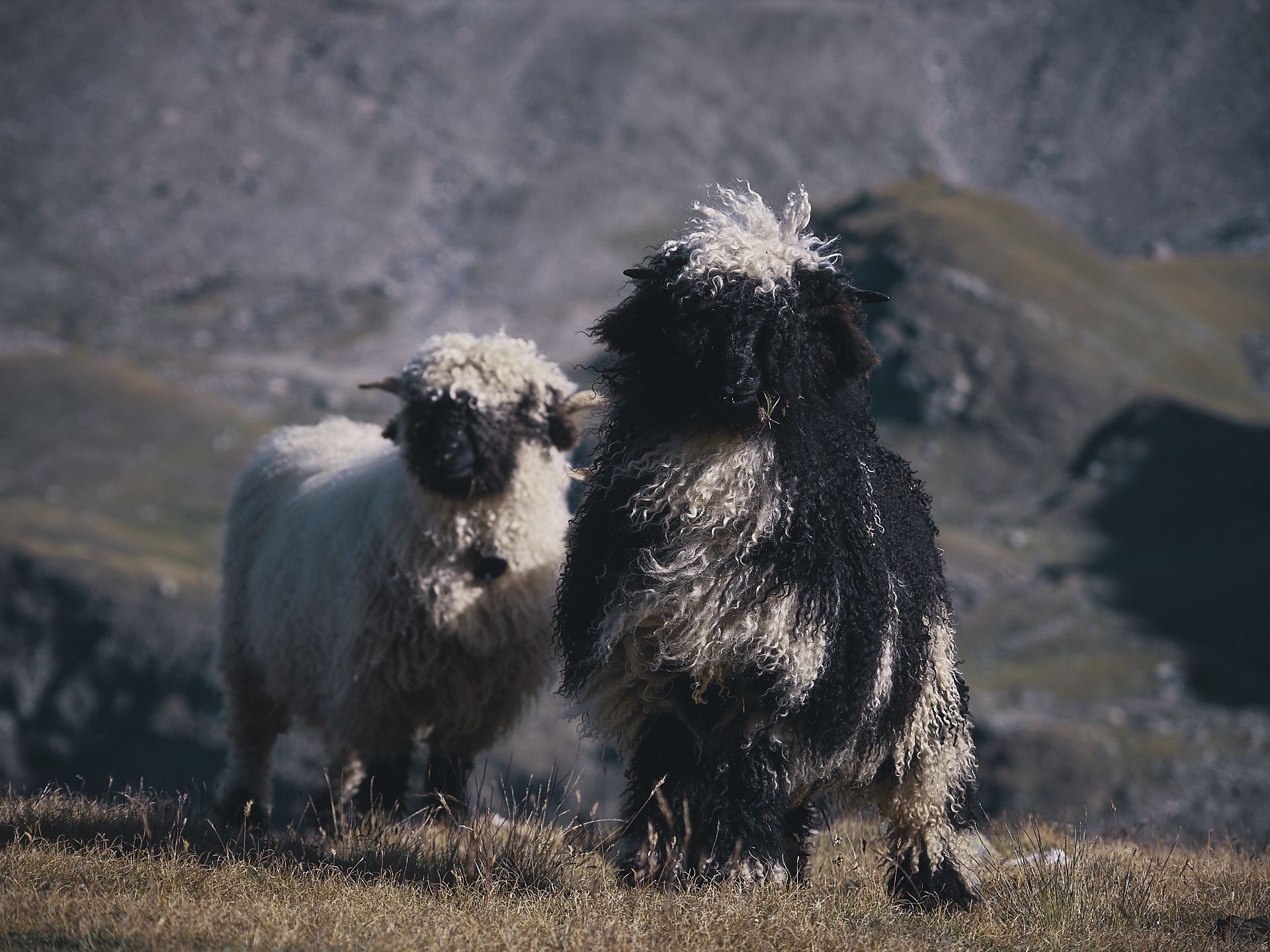 During our first Swiss night, this did not prevent us from communicating with anyone; all the people we met also spoke French, Italian, and sometimes English.

That evening, it was recommended we climb to the Glishorn to get “the most beautiful view of the Valais.” That’s what we did. It took us two-and-a-half days to reach the summit. The route was beautiful and wild, the trail overlooks the valleys and crossed pastures still occupied in the last days of August. 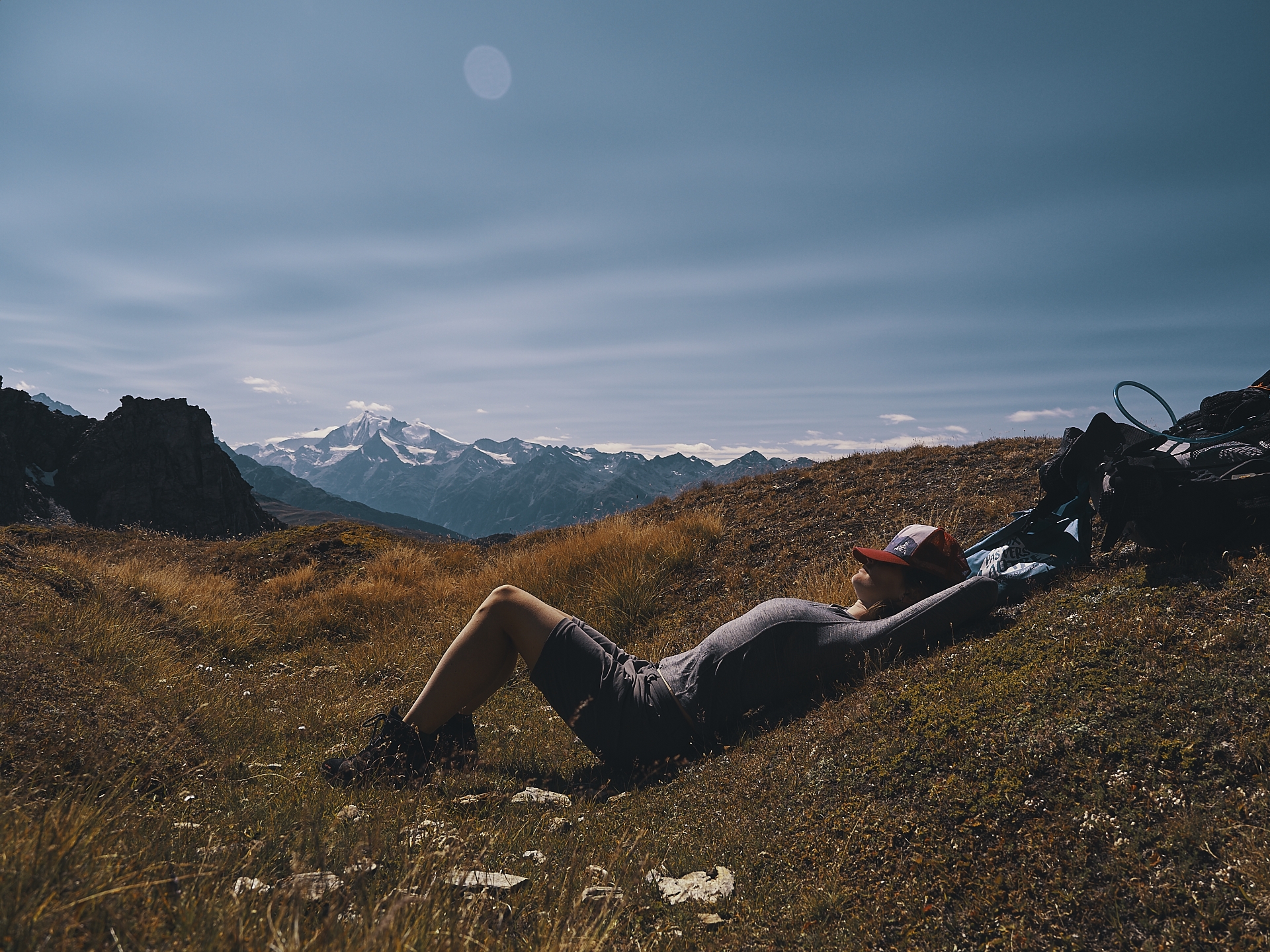 We met there the Black Nose of the Valais, a breed of sheep (pictured above) identified from their black head, white and voluminous wool, and spiraled horns.

Arriving in the Glishorn, we discovered a mountainous overhang that overlooks the Rhone Valley. 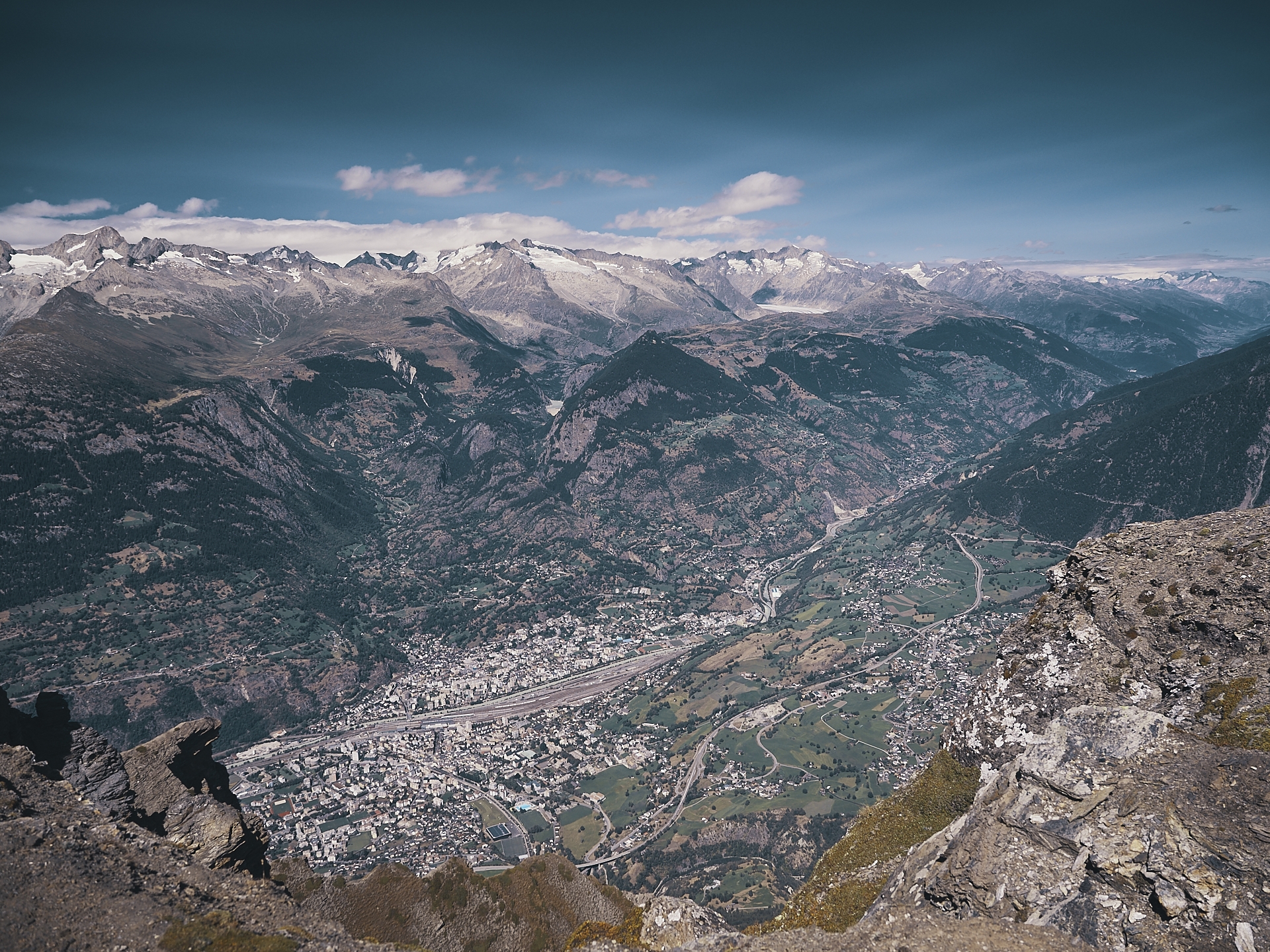 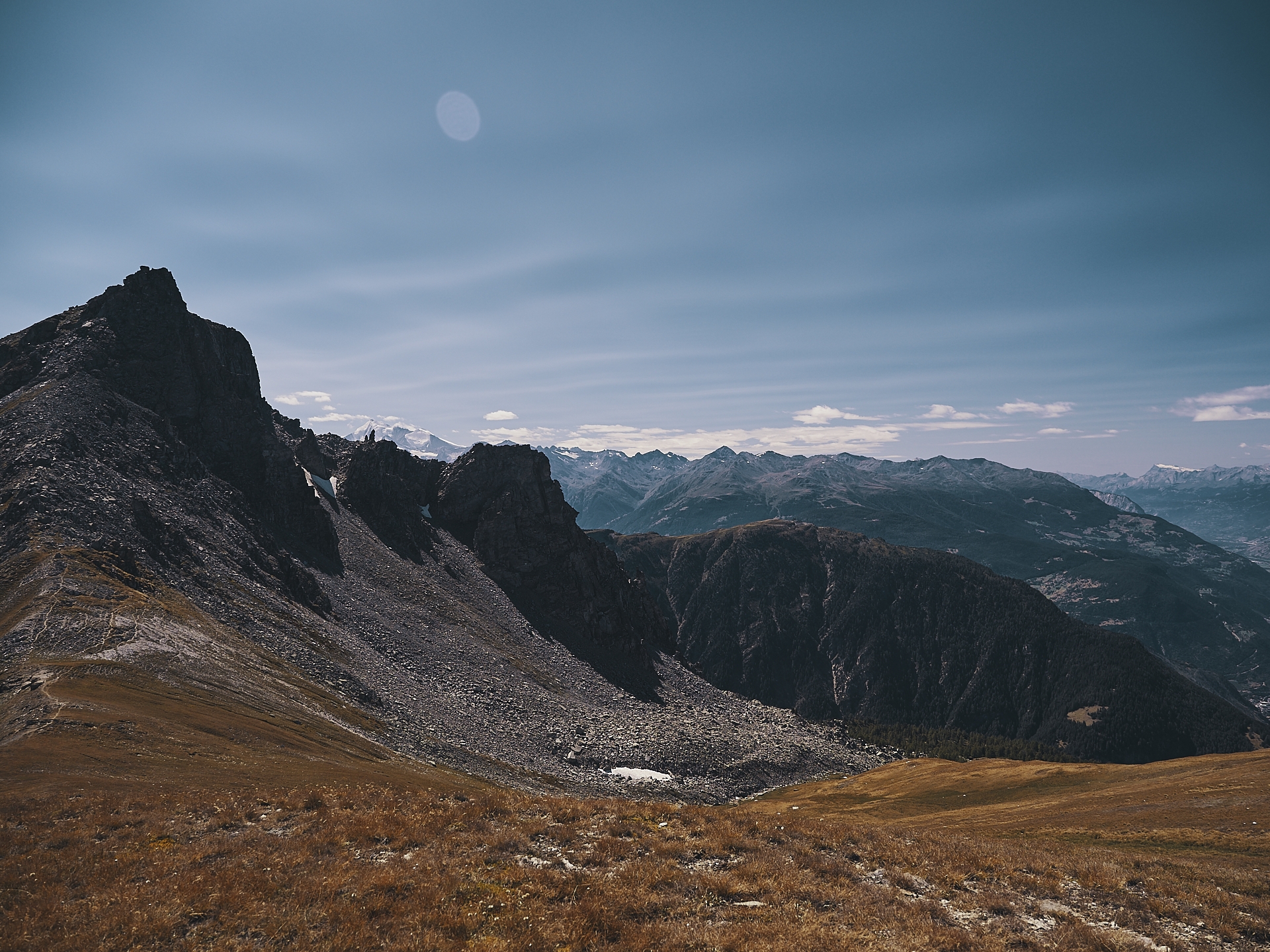 The Huge (and Short-Lived) Aletsch Glacier 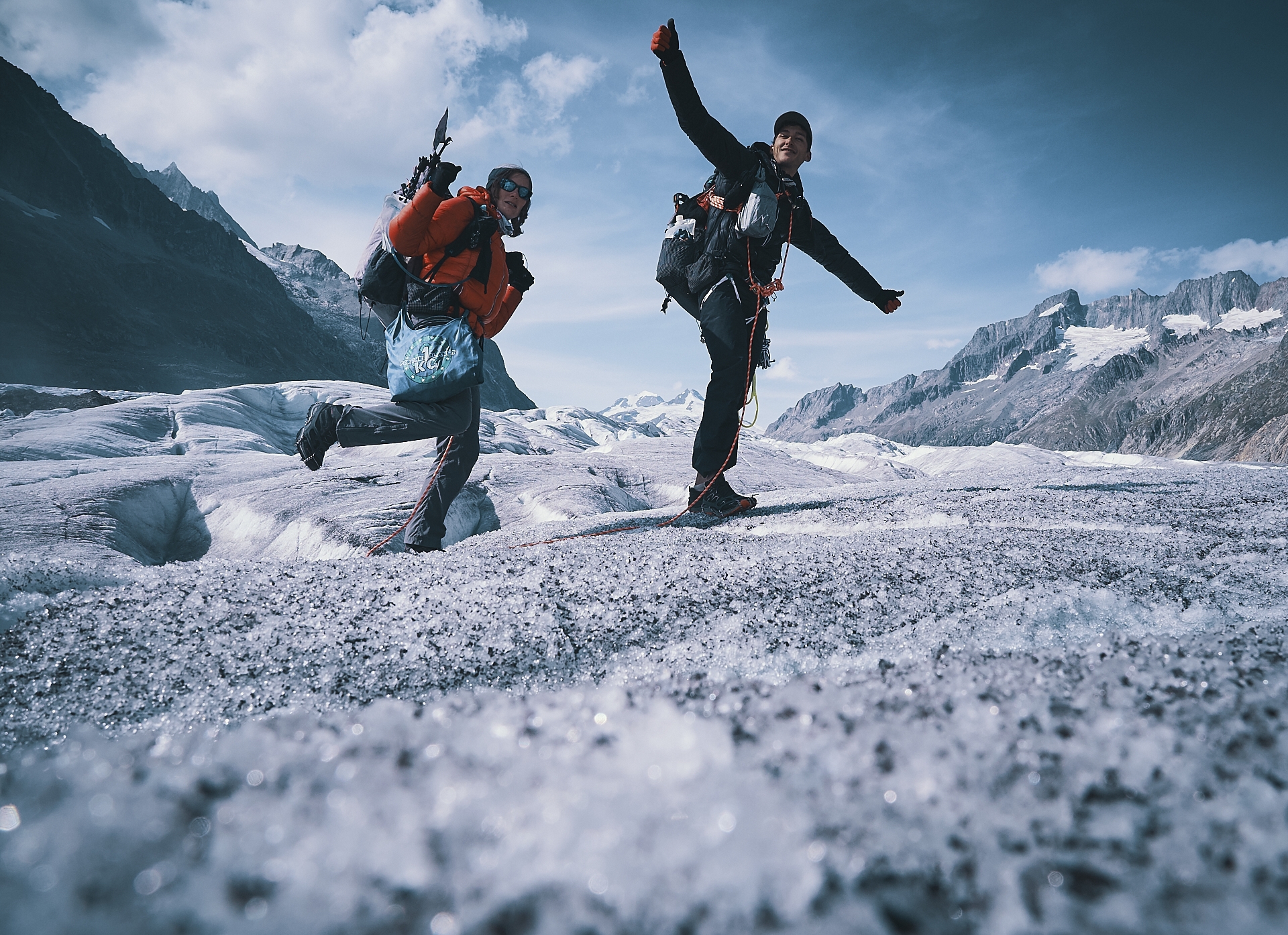 From the Glishorn we had to descend from 6,000 feet to reach Brig, hiking quickly up the other side of the valley to cross the “golden section” of the Via Alpina. This section was promised to be stunning, and it kept its promises! 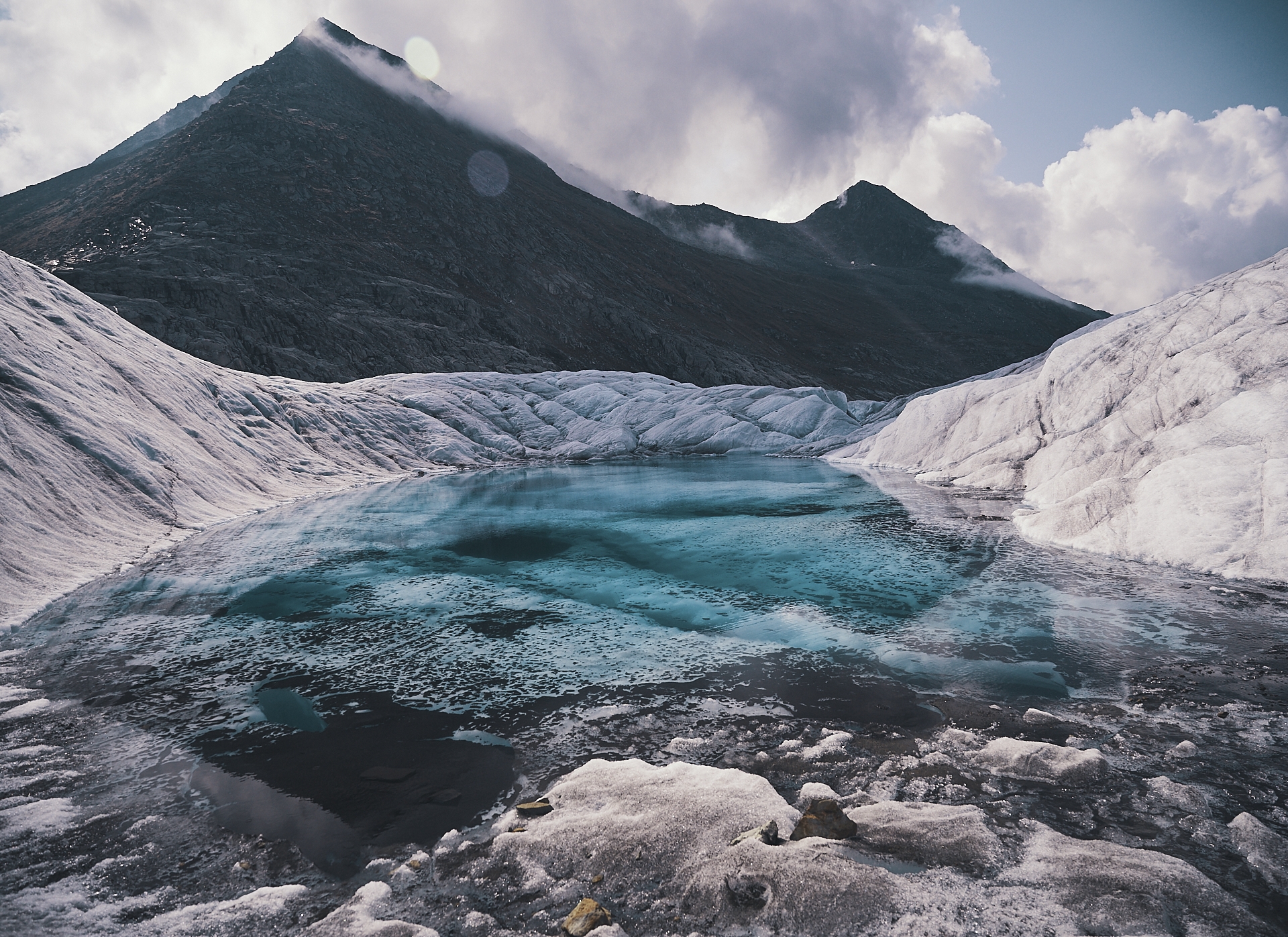 Up there, we met this ice giant that winds between two crest lines, the largest glacier of the Alps. We had never seen anything like it, but in fact, it’s mostly the next day that marked our minds forever. Starting from the Marjela hut, we started walking on Aletsch as far as Konkordiaplaz, the highest and thickest part of the glacier. All day we were alone, really alone. We did not meet anyone except the helicopters loaded with rich tourists flying over our heads. 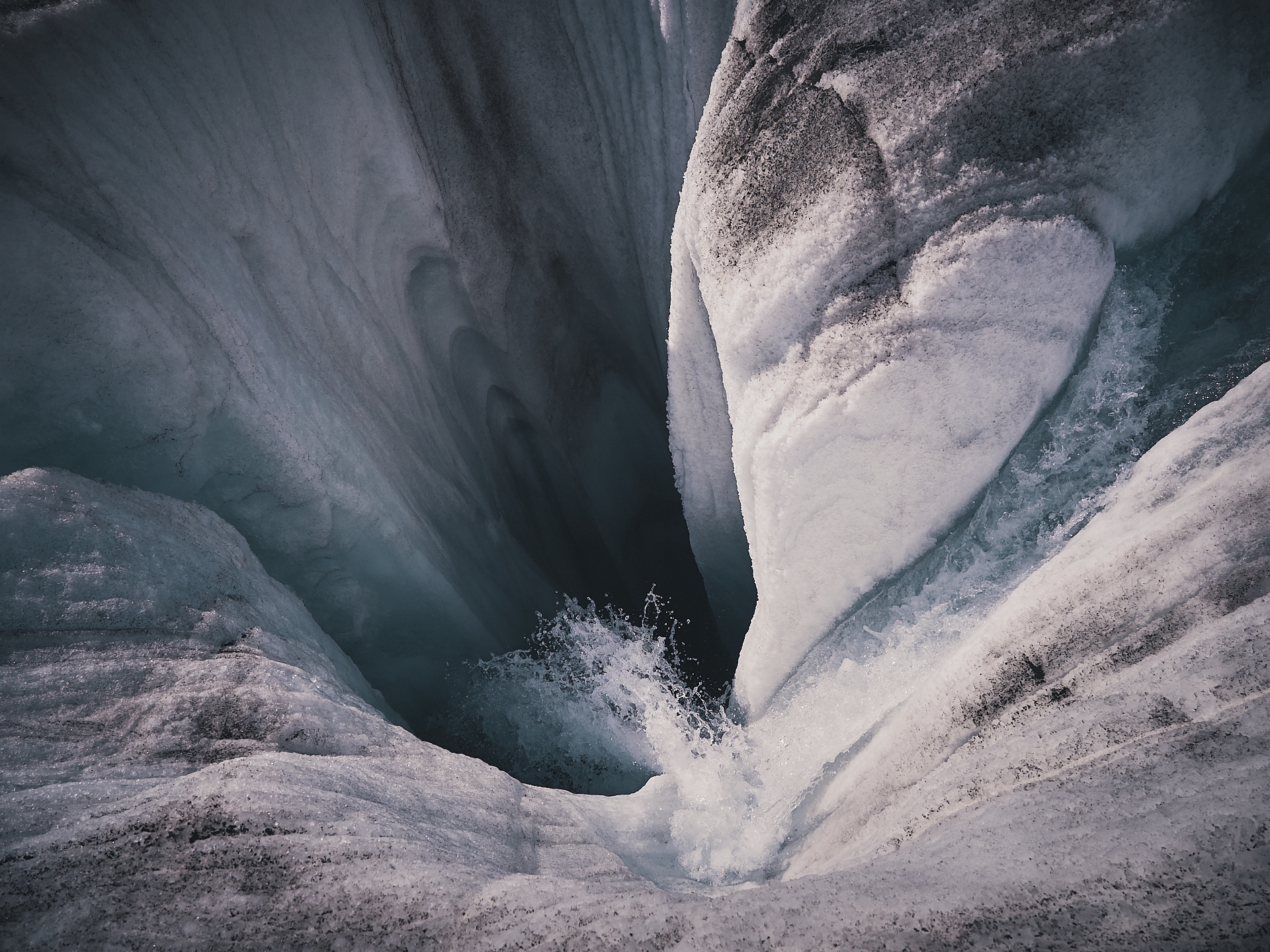 On the glacier, we spent the day  feeling a mix of immensity and smallness, between the impression of an unshakable giant, present since always, and the awareness that his days were numbered. Like the other glaciers and ice floes of the world, Aletsch is hit hard by global warming and recedes by about 170 feet each year. 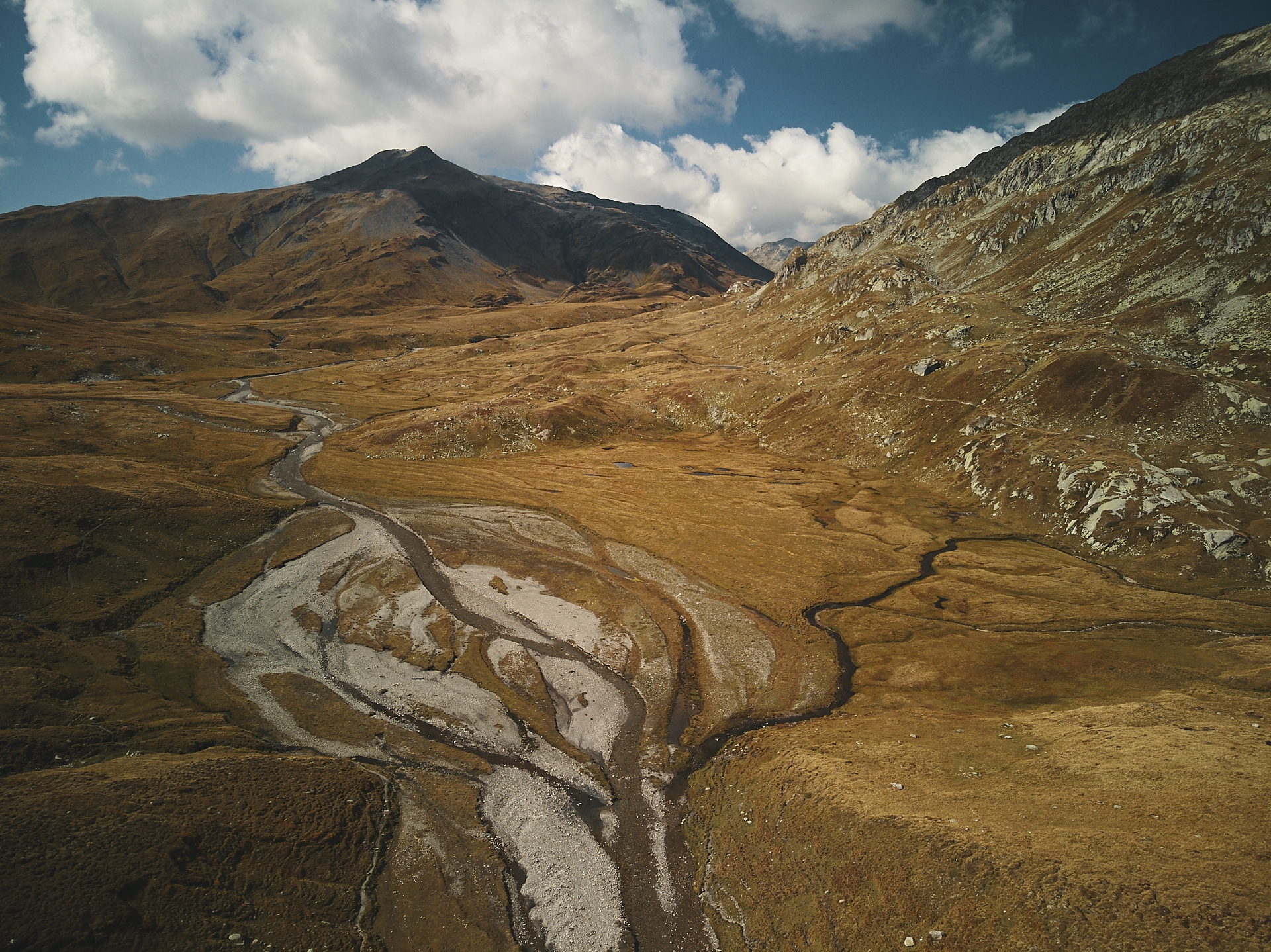 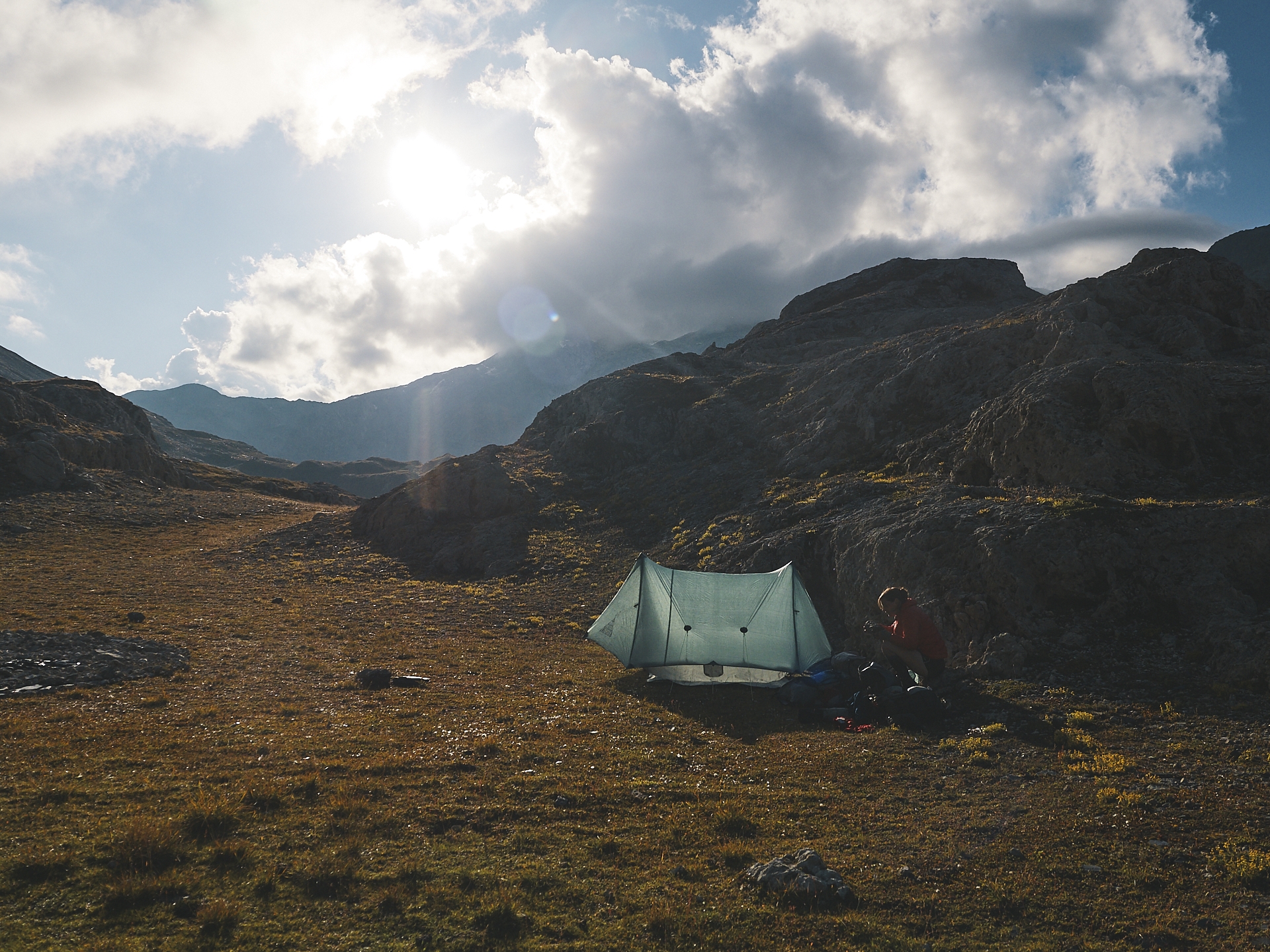 After a dozen days in the Valais, we came to a second canton: the Ticino. We were much more comfortable communicating in Italian, making this section easier. Talking with people in the village of Olivone, we discovered the Greina plain. We learned that in the 1980s, a dam project marking the disappearance of the plain was prevented by the mobilization of the population. It sparked our curiosity and we decided to go. Best idea of the week. 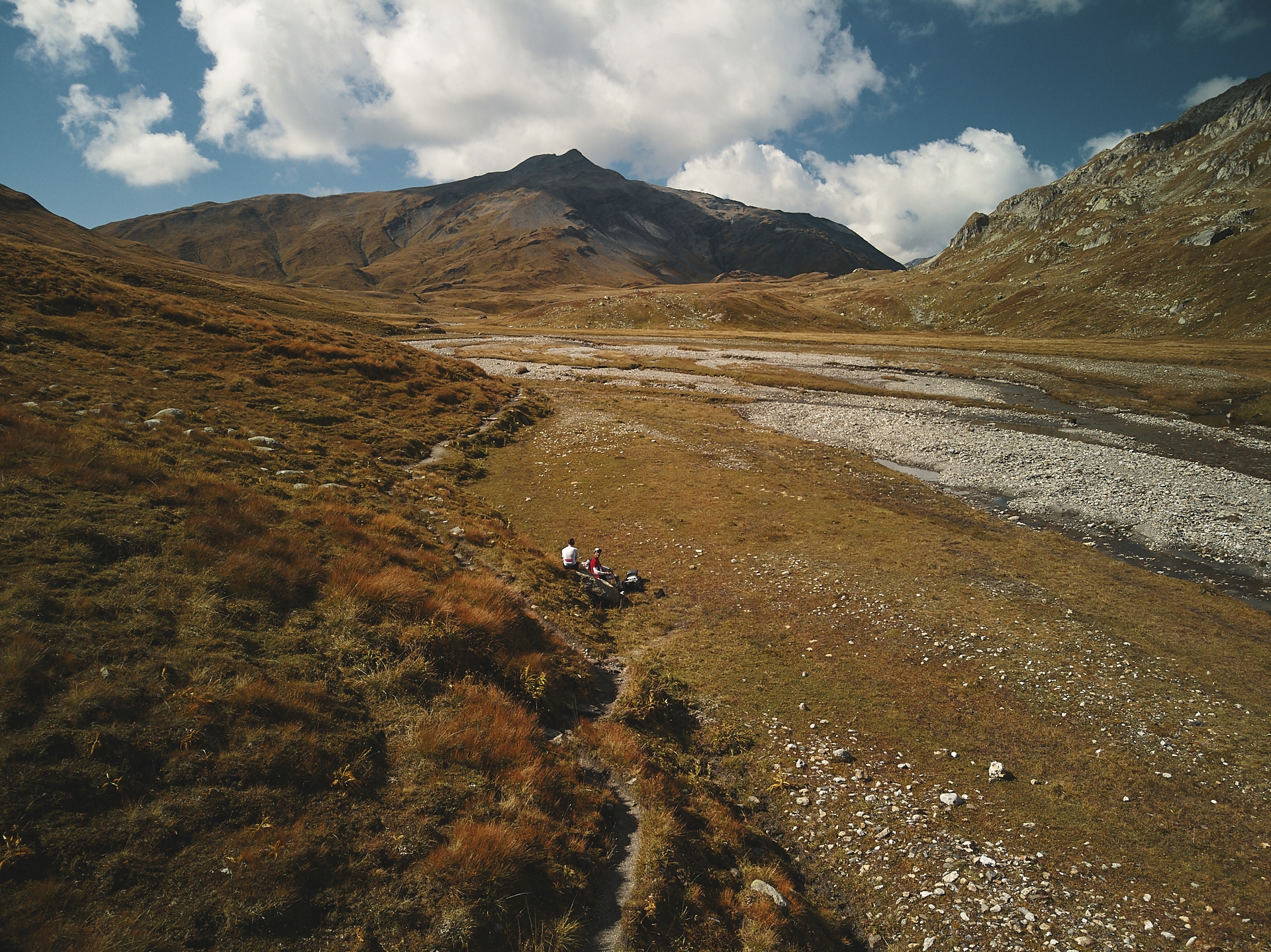 In this season (mid-September), the plain takes yellow-orange tones and there is not as much water as at the beginning of the summer from all the brooks that feed it. Greina is covered with unique tundra vegetation that would have been terrible to see disappear.

Ela Park and the Lakes of Sils and Silvaplana 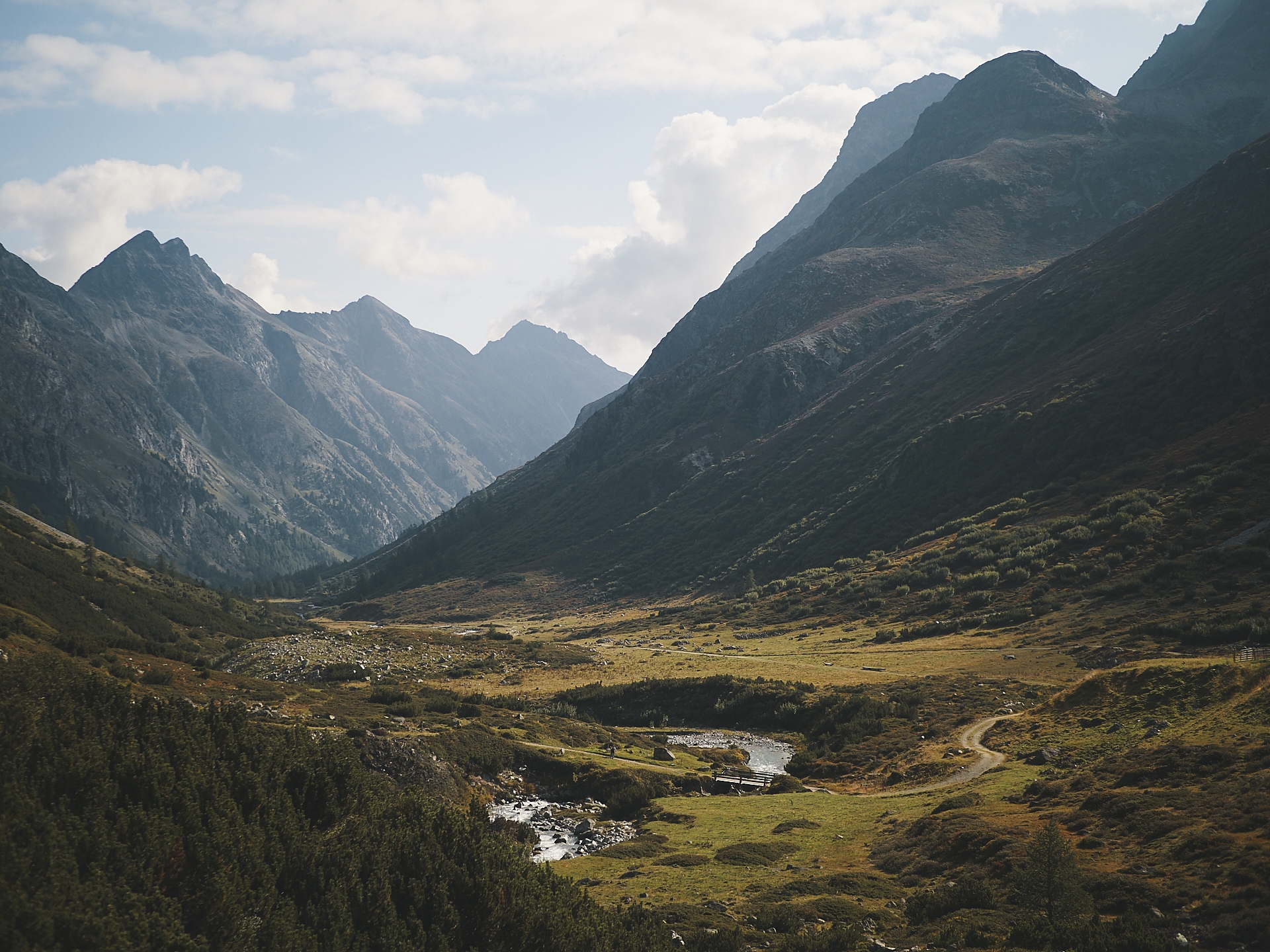 Initially, Ela Park was not on our itinerary. As in every country, we had proposed a vote on Facebook between two sections of route that tempted us. The choice had to be made between Ela Park and the lakes of Sils and Silvaplana. The lakes won and we were delighted. Problem: the route we had imagined to get there was closed because of falling rocks. After a few minutes debating, we decided that the best was actually to cross Ela Park to reach the lakes. It was a good excuse to finally cross these two sublime places. 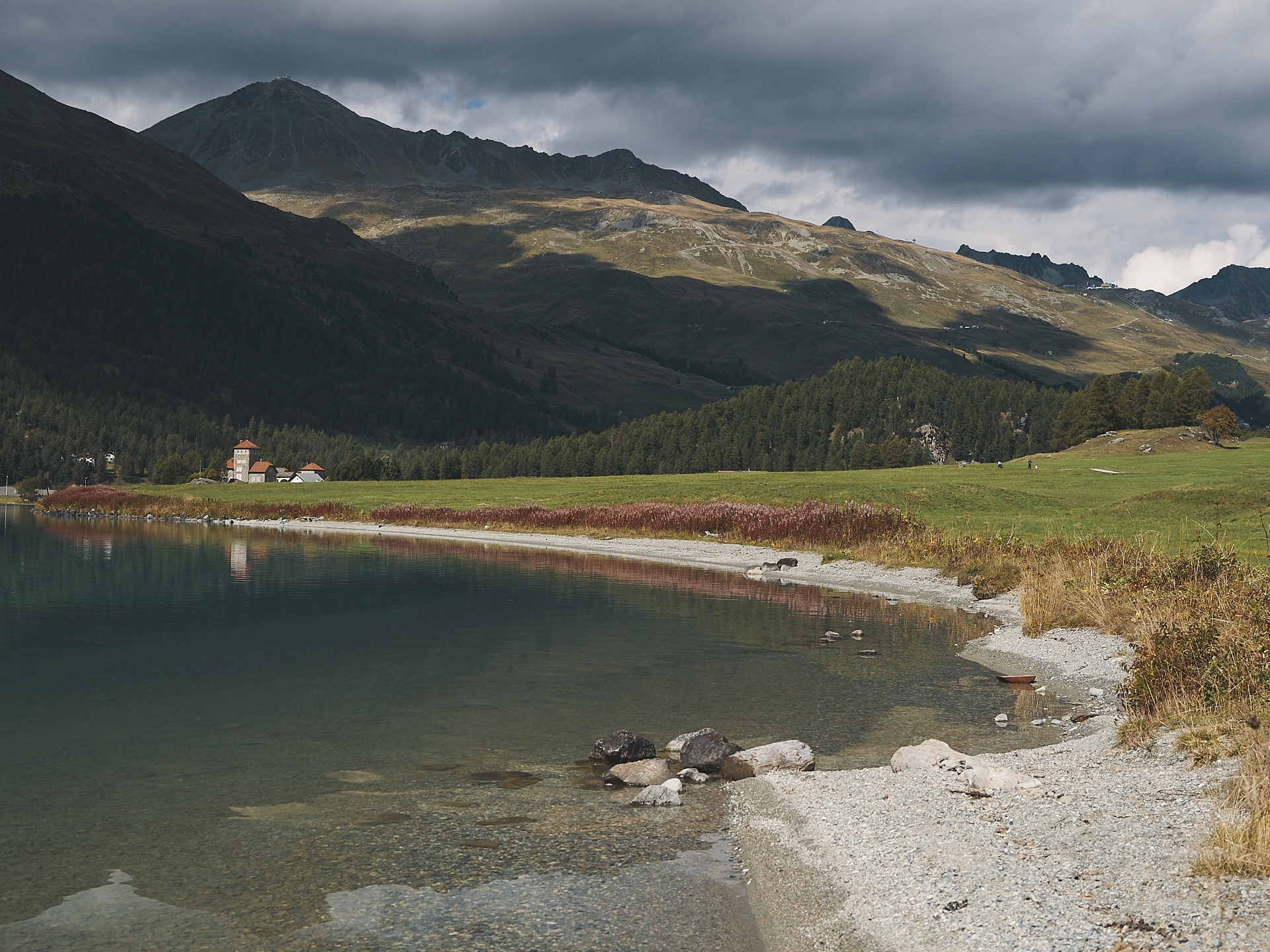 Ela Park was already covered with its first fall colors, and there was hardly anyone there. The end of the season and the lack of cable cars are probably responsible for this.

The sublime lakes of Sils and Silvaplana probably hosted our last swim of the year, and we enjoyed their lovely colors.

The Bernina Glacier and the Piz Palü 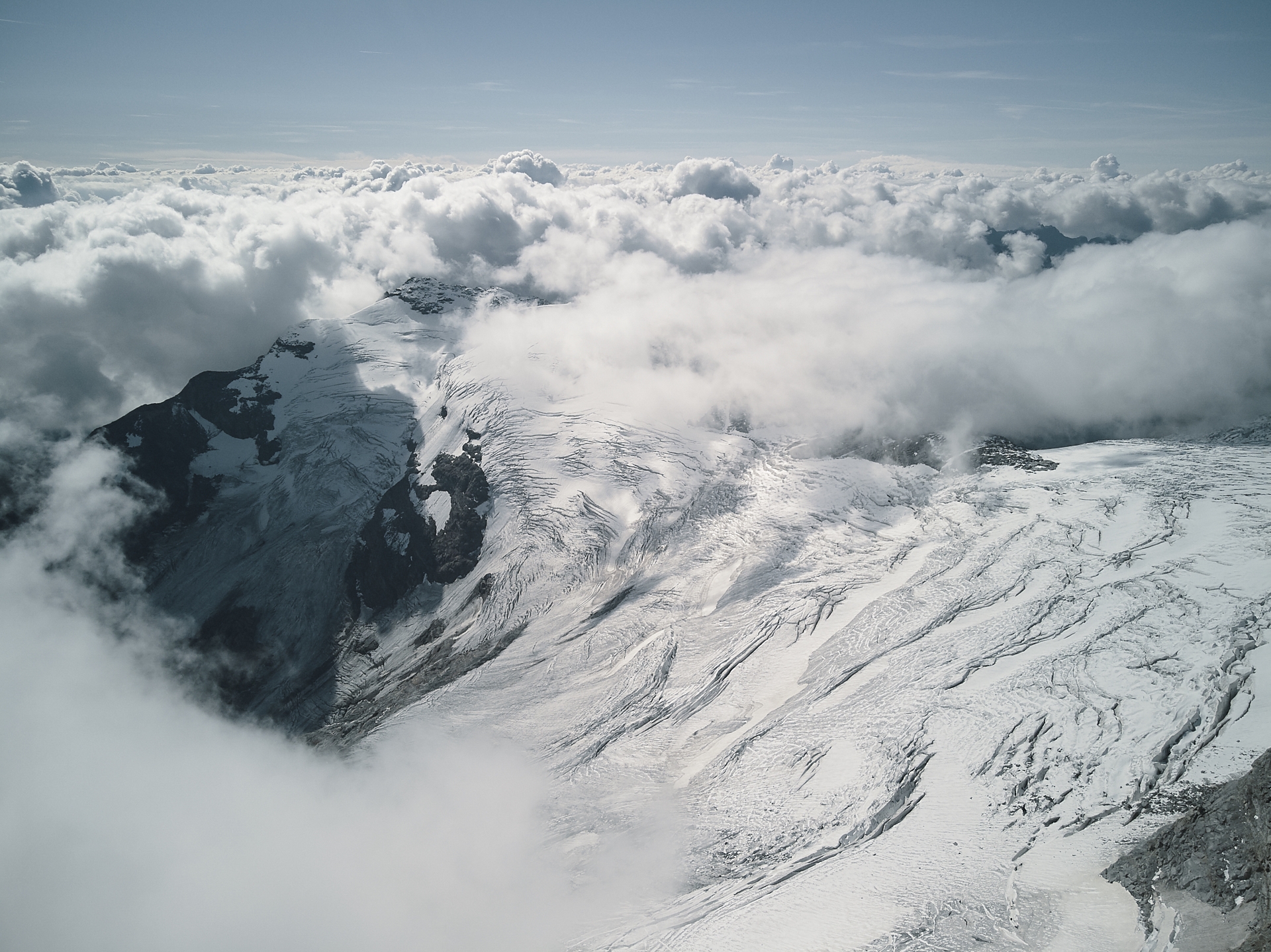 Here we are in Graubünden, third and last canton for us. In Graubünden, the two official languages are Swiss-German and Romansh. It was not easy every day. Fortunately, near the Italian border, we found some landmarks.

Without being mountaineers, this crossing of the Alps has been an opportunity for us to discover the euphoria of the high mountains and to confirm our first summits. On the Bernina mountain range is a gigantic glacier that marks the border between Switzerland and Italy. A nice way for us to leave Switzerland. 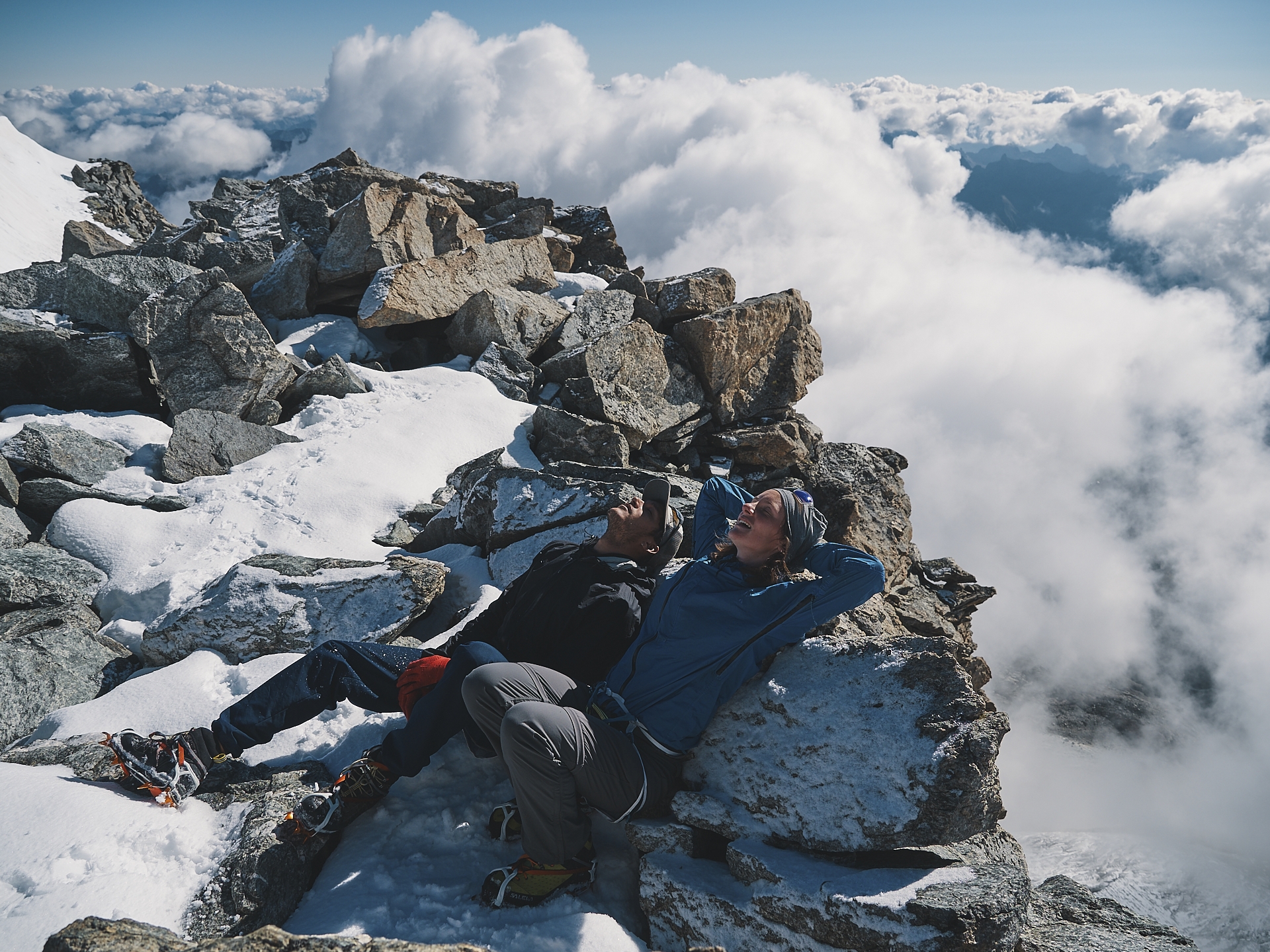 From the Diabolezza hut we headed in the direction of the Piz Palü. We did not get to the summit that day, but we still had a fantastic day.

We leave you with the video episode of our crossing of Switzerland.

From here, we headed to Italy. Look for an upcoming post about our crossing of the Italian Alps.