New Hampshire’s White Mountains are home some of the most challenging and beautiful trails in the country. The trails are often little more than eroded rockslides, navigated by boulder hopping and lowering one’s self off beleaguered tree trunks. And that’s just in summer. Thanks to the intersection of several storm tracks over bald summits, New Hampshire’s peaks are home to some of the worst winter weather in the world. And people can’t get enough.

There are 48 mountains in New Hampshire rising 4,000 feet and above. A well-known objective for New England hikers is to summit each of those 48 peaks, submitting their records for inclusion in the AMC’s 4000-Footer Club. The Whites are full of lists to work towards, and for intrepid hikers, hitting the 48 can be just the beginning. You can hike the 48 in winter, in all four seasons, redline (traverse every mile of trail), and you can attempt the Grid. Completing the Grid means hiking every peak, in every month of the year, for a total of 576 peaks. 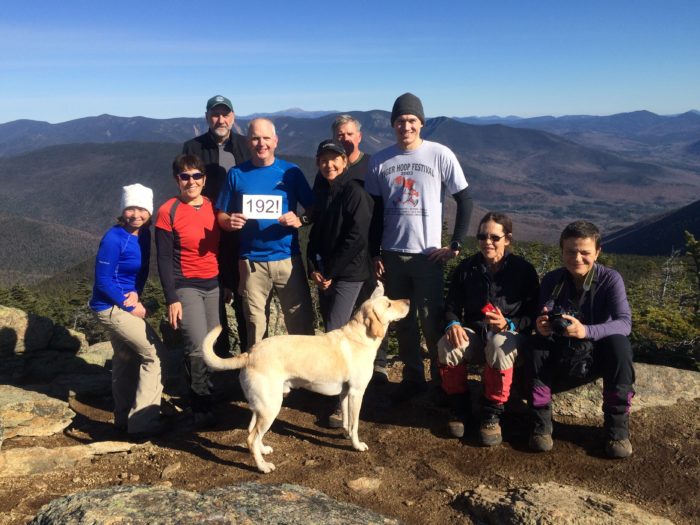 John Bergman Summiting Mt. Liberty (October 2015) to complete the Four Season 4000-footers. The Grid was next on the list.

My love of hiking was born in the White Mountains, but I’d never heard of “gridding” until my father mentioned one of his hiking partners was going for it. He told me John Bergman could always be counted on for a weekend hiking excursion as he worked to fill in the 576 squares on his spreadsheet.

For the vast majority of the population, completing the Grid doesn’t happen in a year (unless you’re the incredible Sue Johnston, which is a whole other story). John works full time as an engineer and has been pursuing the Grid since 2010, which started as a more low-key pursuit, then gained momentum. “Hiking the NH 48 was always on my bucket list, and as I got older I had more time to pursue it,” he told me in a recent phone conversation. “My first goal was to hike a few 4,000-footers. Pretty soon you get halfway through the 48, then you finish them. Then you try winter hiking, and figure you might as well try the 48 in winter… it just goes from there.” 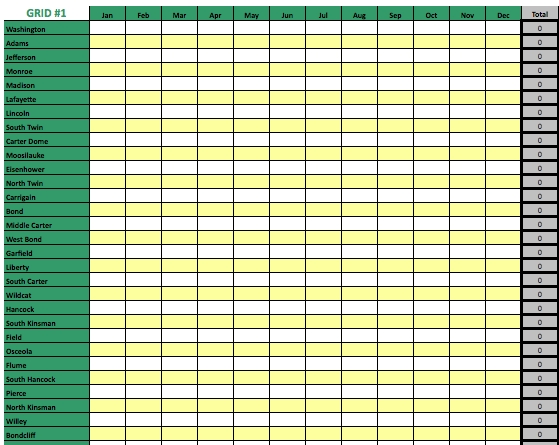 Sample of a Grid spreadsheet from 48X12.com

John is precise in his records. He keeps tracks of the peaks, the dates summited, who accompanied him, and details on the conditions. Because of this, he can tell me he is exactly 68% of the way finished, with 395 summits completed and 181 to go. “It’s something like a million feet of elevation gain,” he says, laughing. “You have to see it as a journey, not a race. It’s about the process and enjoying yourself and the hiking.”

How does a full-time engineer have time to summit 576 peaks? He doesn’t let the Grid turn into a chore. John gets out hiking every weekend, but doesn’t beat himself up if something comes up and he doesn’t get out. The exception to this rule of casual pursuit are the shoulder season months of April and December, which John informs me are the “worst months of the year to hike in the Whites.” 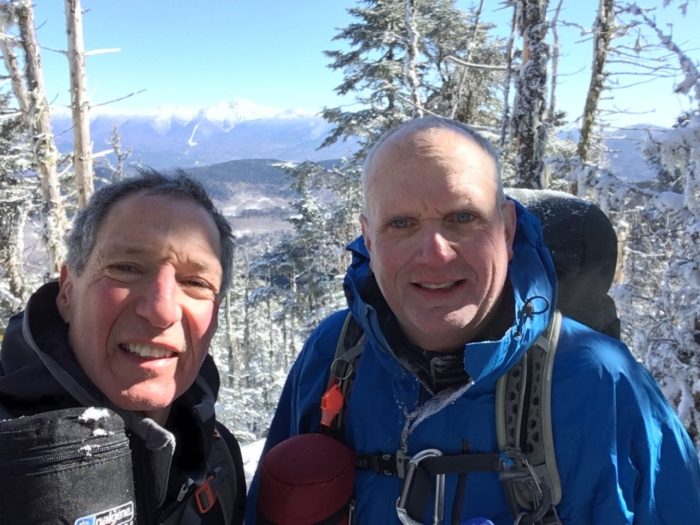 “When you have solid winter conditions, you know what gear to bring,” says John, “but those in-between seasons mean conditions are variable. In April you have bare ground down low, but hit soft or icy snow up higher. Sometimes you carry snowshoes for no reason, or you feel ridiculous strapping them to your pack at the trailhead, but need them once you get up 3,000 feet.” The rest of the months come more naturally he says, but December and April are treated more like a job— setting a schedule and burning through vacation days if necessary.

Winter in the Whites might have more predictable snowpack conditions than the shoulder season, but it’s still no joke. Careful planning, foresight, and the ability to change plans is paramount to staying safe. “There’s no reason to go up there if the forecast looks bad,” says John. “If you go up there in bad weather, not only are you putting yourself at risk, you’re putting potential rescuers at risk.” Gridders have a name for the “hikeable” days in winter to nail the highest peaks: “We call those days “Presi” days. If you want to go hike the Presidentials—especially the 5,000-footers—do it on a Presi day.” 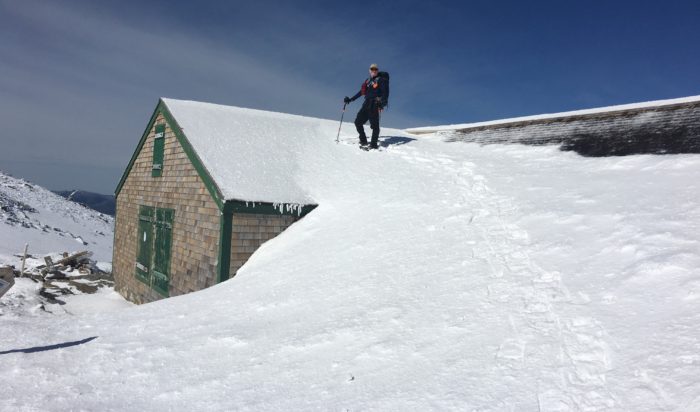 Lake of the Clouds Hut on a mid-April Grid outing

None of this region should be underestimated. Each year, the exposed peaks in the White Mountains claim more lives than many loftier summits around the world, and stories of experienced hikers succumbing to exposure make headlines across the US each year.

Hikers can’t get wrapped up in the effort to complete the Grid and forsake safety. “Every hike and peak requires different planning,” John says, “but when you’re working on the Grid you visit these mountains so many times, you start learning strategies and can predict the conditions better.”

John would never have the audacity to refer to himself as an expert, but the casual familiarity with which he discusses New Hampshire’s peaks is inspiring. His favorite peak? “West Bond,” he answers immediately. “It’s the grandeur of up-close views of scarred mountainsides, the cliffs of Bondcliff, peaks for 360 degrees, and very little evidence of mankind.” The only thing that makes this peak better is that you have to earn it. In the NH 48, it’s among the most remote to access, and is one of the few peaks John will do overnights to summit in the winter months, utilizing pared-down access at Zealand Falls Hut. 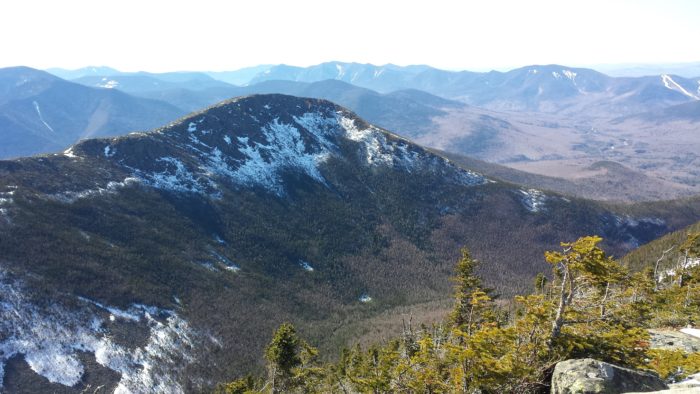 Surrounded by wilderness on West Bond.

His advice for someone—anyone—undertaking a goal like this? “Enjoy the journey. Don’t become obsessed by it.”

Think Gridding is for you? This site has more information, and you can download a spreadsheet to get started. The AMC offers courses on first aid, orienteering, winter hiking, and more for hikers looking to up their game and get into the rugged serenity of New Hampshire’s White Mountain region.