A person can have a lot of questions as they prepare to hike through the woods, desert, or mountains for six months at a time. So we asked past thru-hikers what advice, in just one or two sentences, they would offer thru-hiker hopefuls.

This is what they came up with.

Listen to your body

Don’t get caught up in the numbers game of crushing miles. Call it a day when you’re no longer enjoying yourself. You’ll be happier, and there’s always tomorrow. – Kirsten/Shutterbug, AT NOBO 2017

Listen to your body, if it screams STOP WALKING, do it. Or else you’ll end up hurt, stuck in a crappy town. – Nick (Gator) Karikas, AT 2017 NOBO 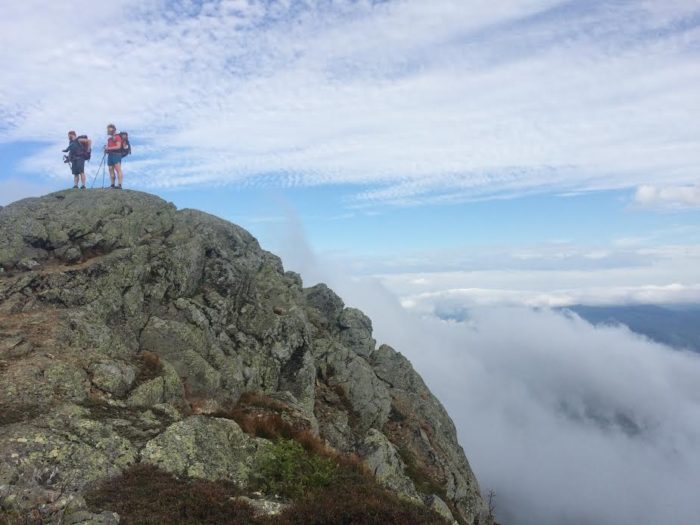 Don’t rush past the good stuff. Listen to your body. Suffering is a choice. Embrace the suck. Bring earplugs. – Sequoia, AT 2017 SOBO

Your feet are everything! Know your shoes before you leave, and take off your shoes and socks off as often as possible to let your feet air out. – Stride, NOBO

Take your breaks, and if you ask yourself if you should eat, then you need to eat. – Bahalla Na, 2012 NOBO 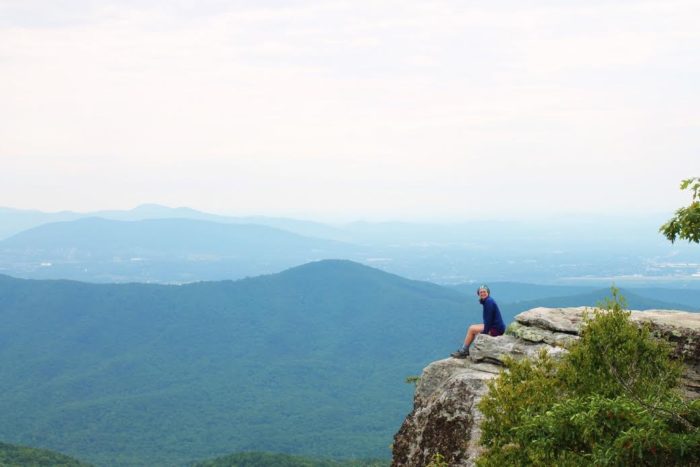 Despite what it may seem like on the trail, it’s okay to complain that the AT sucks. It does suck and it is miserable at times… but so worth it. – Pioneer, AT 2017

Find comfort in discomfort. But take showers whenever you can! – GI Jane, AT 2017 NOBO

Spend the night by yourself (not at a shelter) a few times. Let yourself be alone in nature—this is when you grow the most, and when you return to the real world you will fear nothing. – Bonesaw, AT 2017 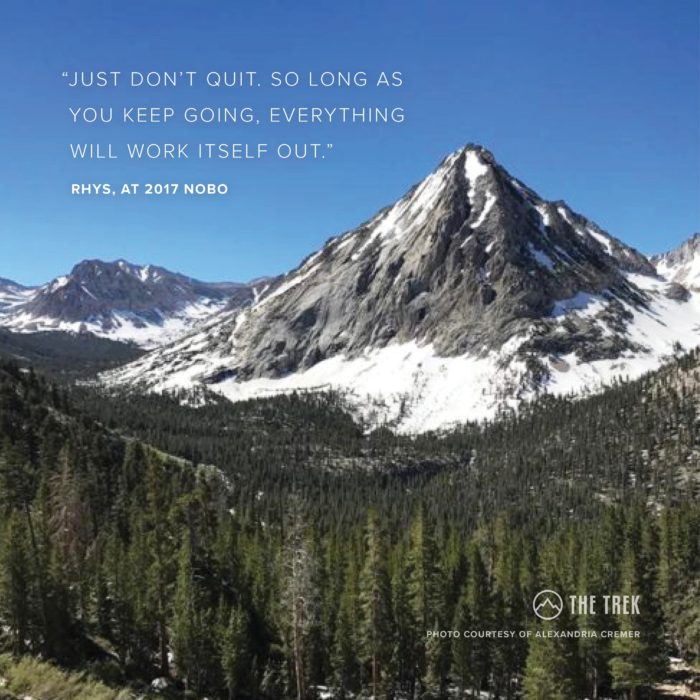 If you aren’t enjoying the hike, think about why you are doing it. You won’t want to talk about 2,000+ miles of misery and six months of lost time. – Bookie, AT 2015, NOBO leapfrog

3×3 rule. Don’t think about giving up before you’re dry, full, and in shelter. If you still want to give up, wait three days to make seriousness of your plans. – Nature Boy, AT 2017 SOBO

If you ever catch yourself saying “I have GOT to come back here someday,” stop, and enjoy it while you ARE there. I call this taking pictures with your brain instead of your camera. – Wick, 2017 NOBO

Your legs are strong, they will only get stronger. Don’t obsess over base weight. – Rowdy!, NOBO 17 LASH 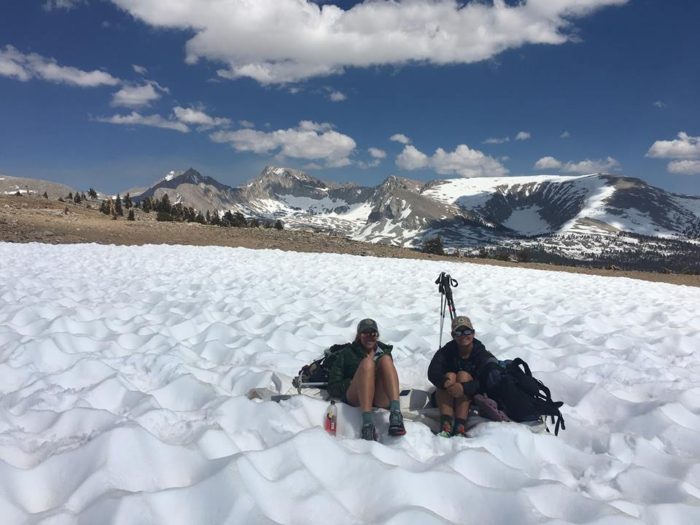 Don’t rush! Take time to enjoy the moments that come, to bask in the beauty, to talk to people, and to do the spontaneous things. – Mary (Vulture) Meixner, AT 2017 flip-flop

It goes by a lot faster than you think. Take your time, breathe, and take lots of pictures! – Wifi, 2017 NOBO

If you’re hiking the trail in an attempt to solve an issue you have within yourself, know that the trail won’t solve that issue for you. But the trail will provide the time for you to solve it yourself. – Alexandria/Soulshine, PCT 2017 NOBO

Be present, take it all in, journal even when you don’t feel like it, take a ton of pictures and meet everyone you can. – JK, NOBO 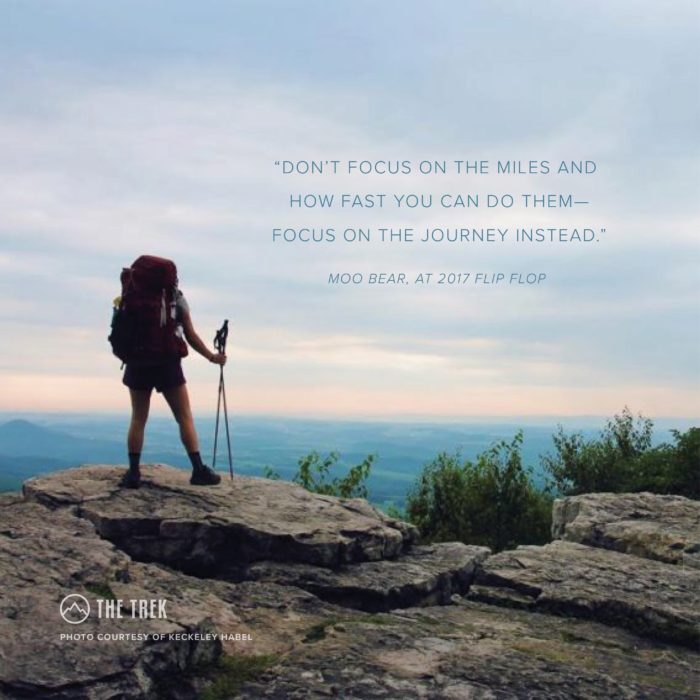 Don’t let a day go by that you don’t appreciate the fuck out of what you are doing. When it’s over, you’ll miss it every day for the rest of your life. – Yogi, AT 2017 NOBO

Start slow, stay determined, and open your mind and heart to one of the best experiences you’ll ever have in your life. – Blue Steel, AT 2017 NOBO

Take your time and enjoy it! The mountains are still there no matter how fast or slow you go. – Chernobyl, AT 2017 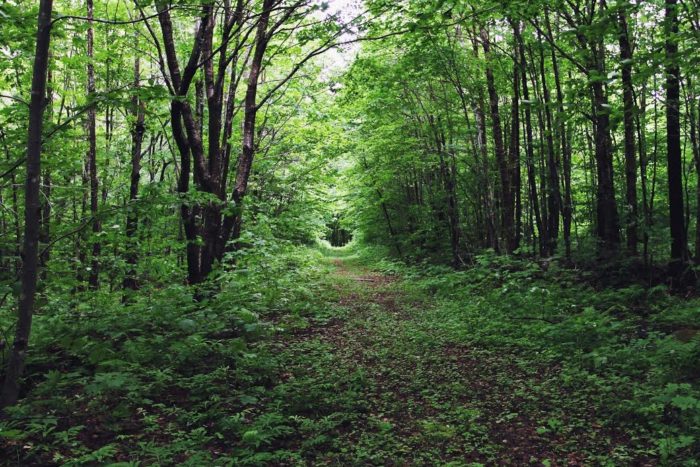 Keep in mind that the less you plan ahead (in terms of timing/food drops, etc.) the better off you’ll be. You can’t possibly know what to expect day-to-day before you start hiking. – Ruby Cosmo, 2017 NOBO

Don’t pack anything that has only one use. Most of the stuff you think you need, you really don’t. – Bear Bait, AT 2017 NOBO

Plan everything in detail and take it extremely easy for two weeks. After that, go with the flow and take care of yourself! – Therese (Bangles) Coad, 2017 flip-flop

Prepare the best you can, have a plan, and be prepared to abandon all of for spur-of-the-moment changes to enhance your experience or needs. Simple. – Debbi/Honeybee, AT NOBO 2017

My biggest regret was not writing enough, so take a journal and write every single day even if you’re tired and all you write is where you camped for the night. Having that post-trail will be priceless. – Topher/Adele, AT NOBO 2017

It is okay when plans change; everything will work out. Just stay positive and focused. – Jennifer Cubana, AT 2017, NOBO 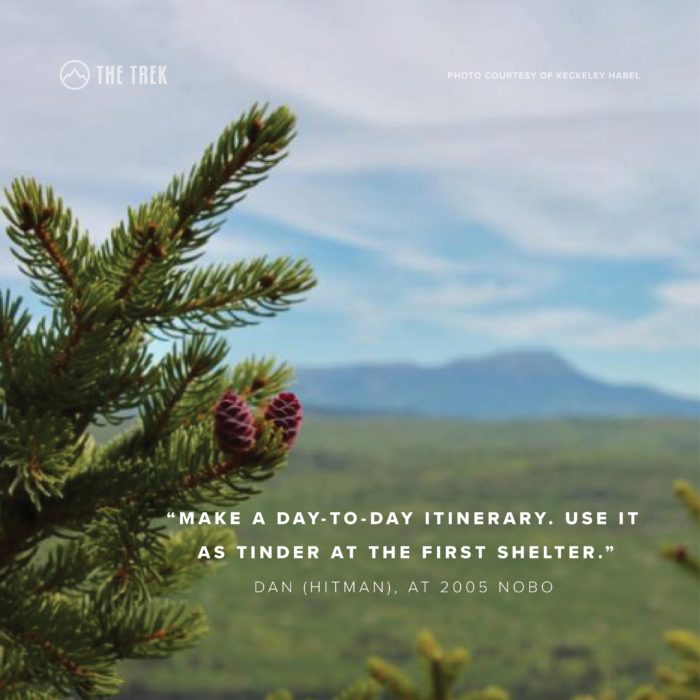 No one’s a professional thru-hiker, take every piece of advice you receive with a grain of salt. Everyone has different things that work for them. – Matthew (Moose) Cooley, AT 2017 NOBO

Throw your plan in the garbage and trust that it will all work out. – Hook and Swiss Miss, AT 2017 NOBO

Never walk over a water source and not fill up. It’s the worst when you really need it, and now you have to hike a half-mile down the mountain to get water—and then back up—just to get forward progress. – Matt/ Paww, AT 2017 NOBO

It’s going to hurt and will be the most challenging thing you’ve ever done, but you just have to keep taking steps and moving forward. Each step you take is a step closer to the next best thing, the next view, the next mountaintop, the end. – Keckeley Habel

Do the damn thing 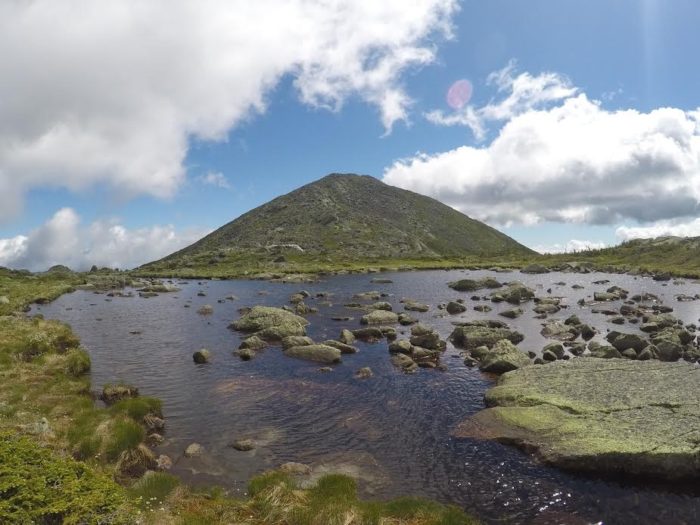 Have something lined up to do for when you finish the trail and somewhere solid to live. Post-trail depression is real and this helps. – Kelly (Sleeping Beauty) Anderson, AT 2016-2017 Flip Flop

Know that you’ll definitely want to quit, it’s just a matter of how you react to that voice. – Stinky Cheez, AT NOBO

Save enough money so that you don’t miss out on experiences, but don’t be “that guy” who’s better than everyone else because of it. – Backtrack, NOBO 17

The most successful hikers just want it really, really bad. There will be plenty of obstacles, discomfort, stress, and suffering that might make you want to quit unless you have an insatiable desire to do the whole thing. – Dean/Bug Juice, AT 2016, PCT 2017 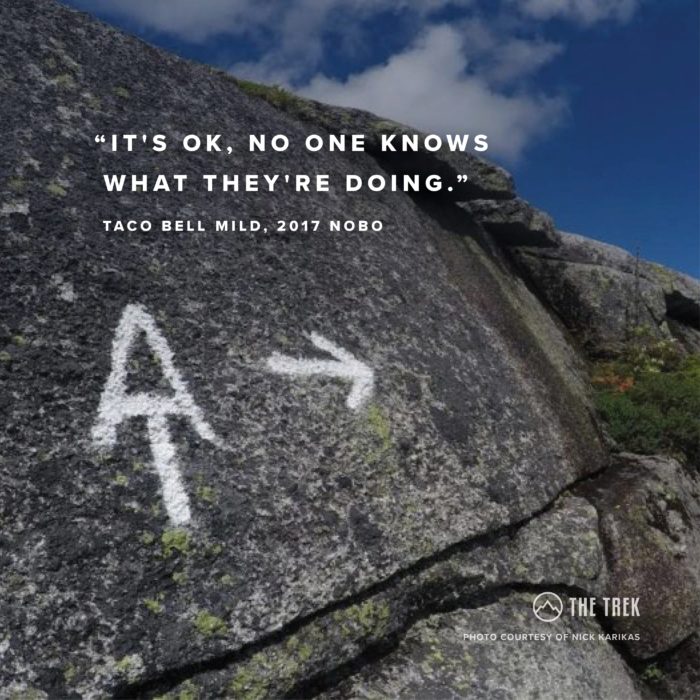 You must first start to be able to finish. You need to keep determination every step to finish. More money and unlimited time frame will make it more enjoyable, and most of all have fun. – James (Crazy Tree) Allen, 2017 NOBO

Whether you hike 20 miles in a day, or hike three miles, you’re that much closer to achieving your goal than when you woke up that morning. Progress is in every step, recognize that! – Baguette, AT NOBO 2017

This is YOUR HIKE and you get to define the terms of your success. Years later you’ll relish these memories, no matter how far or which direction you went. – Gary (Green Giant) Sizer, AT 2014 NOBO

The importance of gear 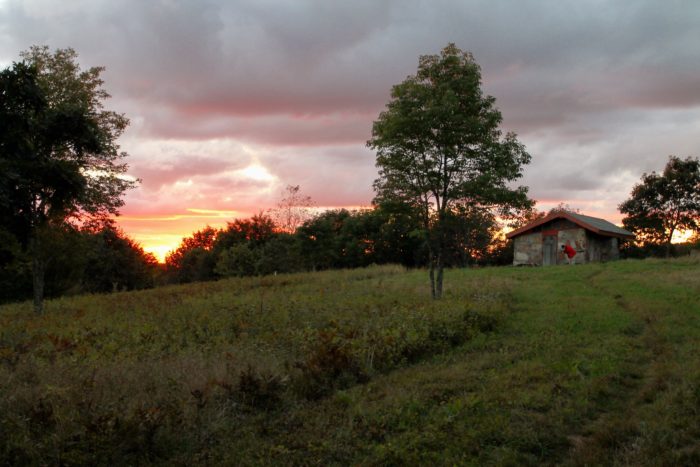 If you’re gonna use an ultralight tent, get a two-person, not a one-person! You won’t be able fit your gear in with you during torrential storms otherwise. – Zoe/Maneater, AT 2017 NOBO

Keep it light and simple. – Brian Whidden/ Gizmo, AT NOBO

You can never have enough waterproofing items/layers in/on your pack. – Kevin (Picasso) Dvorsky, AT 2017 NOBO 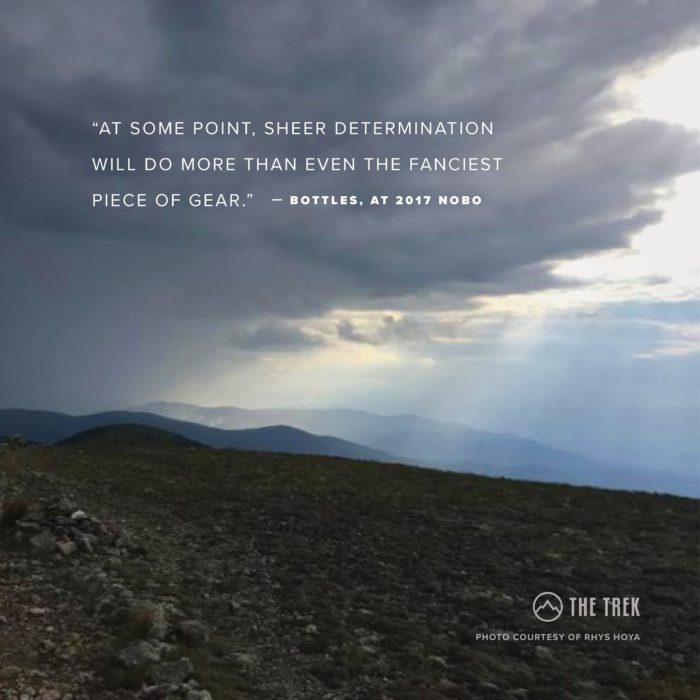 Grams are ounces and ounces are pounds.- Matt/ Paww, AT 2017 NOBO

Earplugs are your best friend—in the woods and in hostels.- Stinky Cheez, AT NOBO 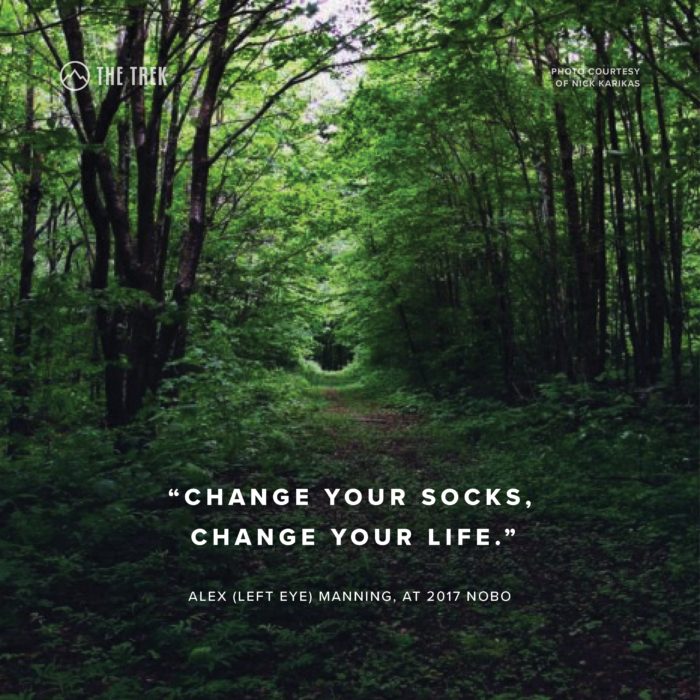 Prewash your socks! Give them a really good rinse and squeeze in a sink to get most of the dirt out before you stick them in the washing machine. The only way to beat the crusties! – Gina (Tumbleweed) DeMeo, AT 2017 NOBO

Talk to a shoe/foot expert, and get insoles if you need them. Feet are so very important. – Camp, AT 2017 NOBO 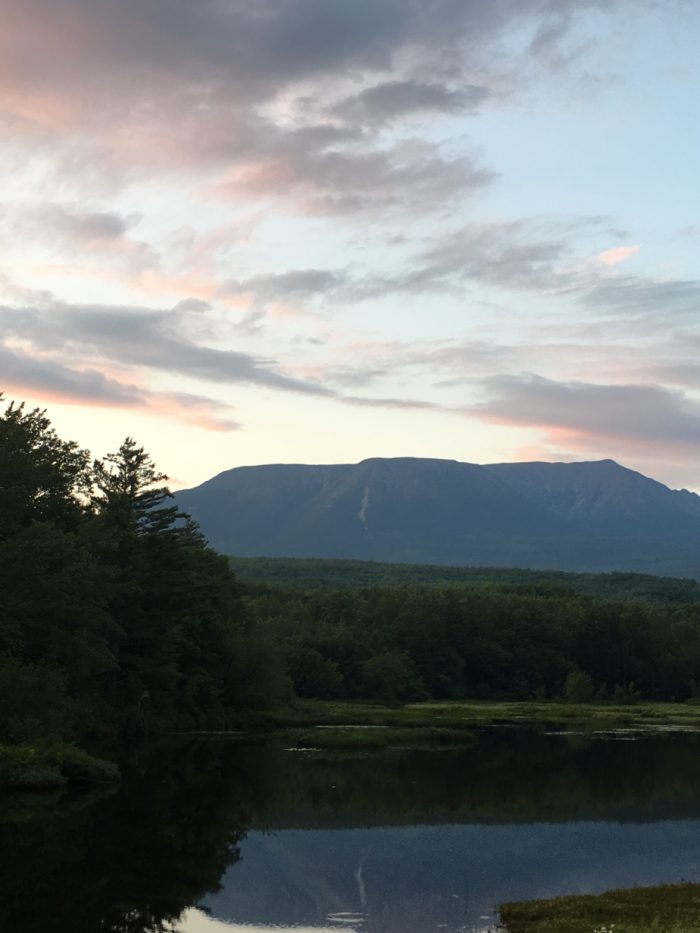