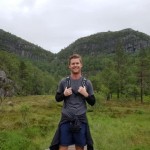 88 Miles Through Austria – And Why That’s Enough for Now

Seven days, and 88 miles. Two blog posts so far, and now the third—the one which I have been dreading the most. After a week on trail, I have decided to get off. It is not fun, admitting to the world that you are giving up something that you have so publicly stated you were doing, but I still want to write this. After all, it’s part of the experience, and part of the learning. But before I explain to you the reasons why I’ve stopped, I want to detail the trail to you and what I’ve experienced so far, as the trail itself really had little to do with my decision.

I started on a hot Thursday, a public holiday in Vienna, with my girlfriend joining me for that first day. It felt a little bit weird walking through the rich suburbs of Vienna looking for the trailhead, complete with backpack and trekking poles, only a few showerless days from being hiker-trash. There is no fanfare with this trailhead – not many people try the Nordalpenweg, so it just sits as an afterthought in a park behind a Church. People played tennis and walked their dogs nearby as I posed for the obligatory start photo. And then we started walking. 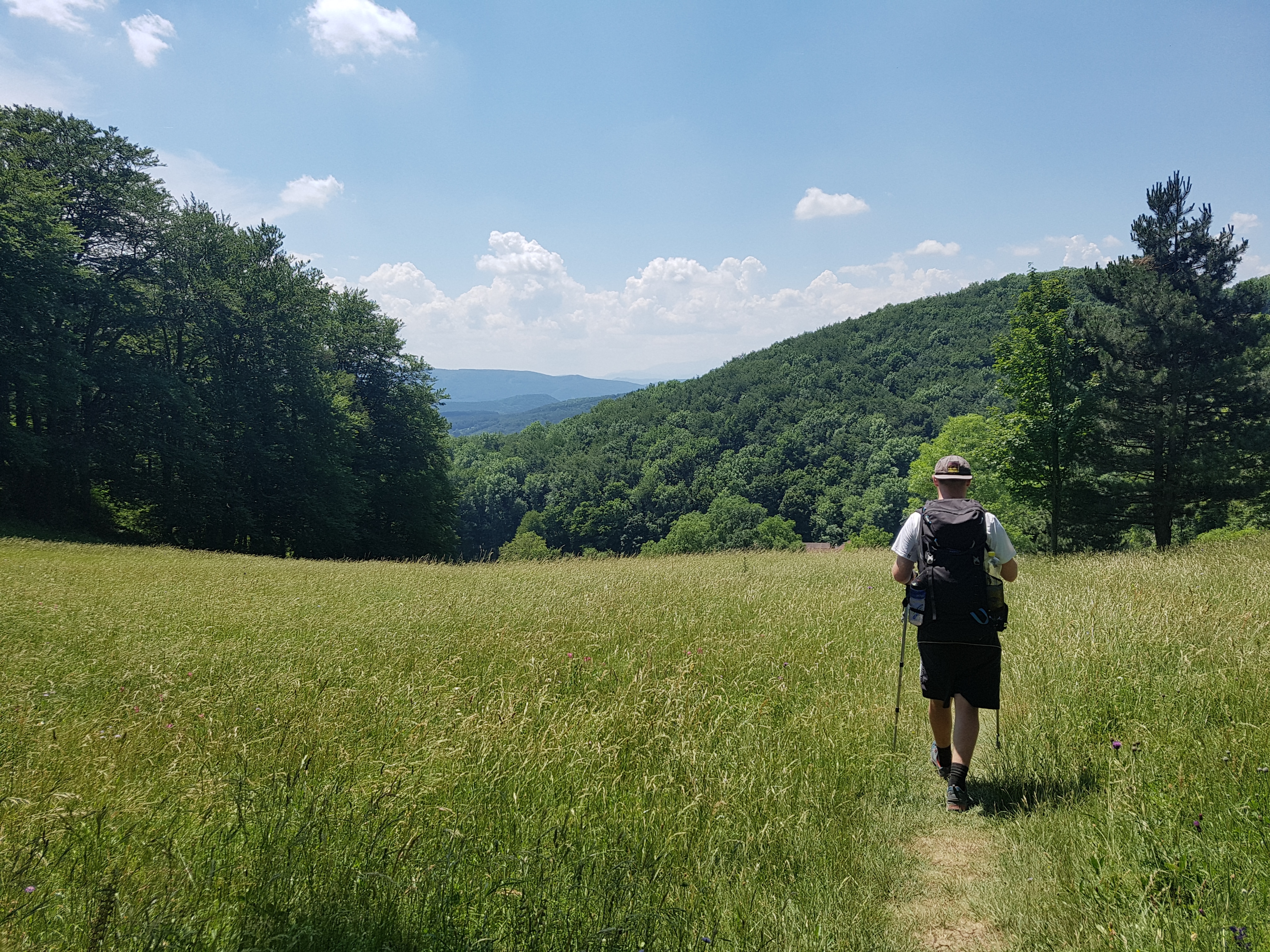 That first day, and the next, didn’t really feel too much like a thru-hike. It was hot those first few days, made worse by the humidity, but the trail itself was not too challenging. I walked through a combination of forest and field, the forest giving me welcome shade, the fields giving me nice views of rolling pastures and the Lower Austrian landscape. Restaurants and huts were frequent occurrences, always tempting to stop for something to eat or for a beer. It was nice. Nothing overly special, but it was nice. And it was good preparation for the days to come.

On day three, there was rain. So much rain. Like, all day. The trail got a little more difficult, the elevation changes became more pronounced, and generally I felt a little more alone. There was also supposed to be the first mountain climb at the end of the day – a 1000m climb over Schneeberg, and down the other side. I arrived at the base of the climb at about 2pm, I couldn’t see a thing, and I knew it would be worse as I got higher, so I abandoned the day, and returned when the rain had gone a few days later.

This is the thing about the Nordalpenweg, there is a lot of climbing involved. Not so much climbing that specific gear is required, but enough that you need to be comfortable hanging onto metal ropes or ladders bolted into the rock as you traverse or climb rockfalls. It means that you have to be very conscious of the weather and your own confidence in heights. I came back a few days later to climb the mountain and head down the other side. A relatively short day, but I knew the next few days would be much longer and more difficult. 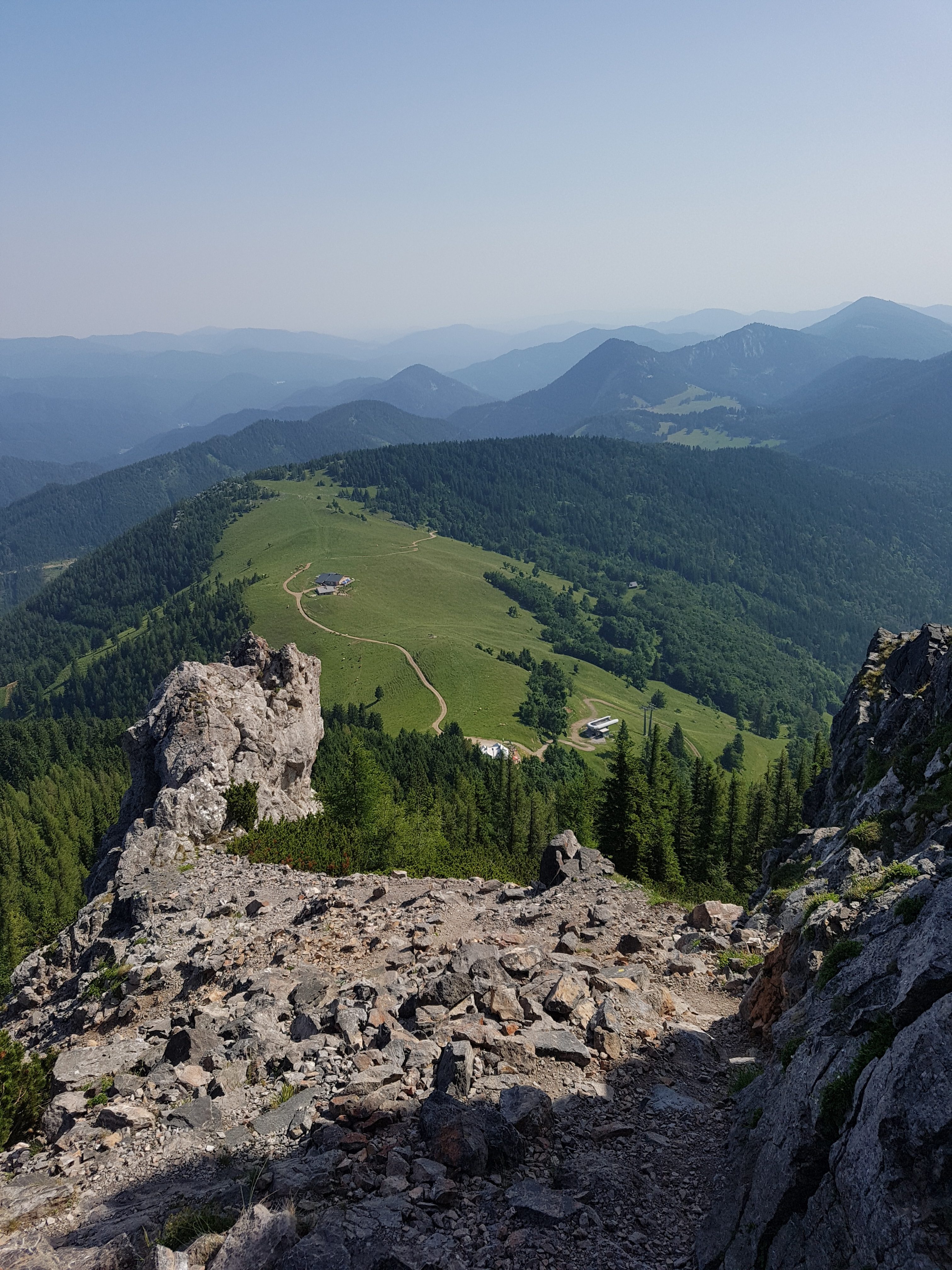 The climb up Schneeberg

The morning of day four started with a very steep climb. I climbed 2500ft in the first mile and a half, largely with the help of ladders bolted to the mountain. Before I moved to Austria I wasn’t the best with heights. Now I’m OK with heights, and this wasn’t too difficult, provided I didn’t spend too much time looking down. The benefit of this steep climb is that you are at the top pretty quickly – the remainder of the day was spent hiking across an elevated plateau, the trail winding between stunted pine trees (I’m guessing a combination of elevation and a lack of ground water, but these trees only grow to head height) to my accommodation, Karl Ludwig Haus. 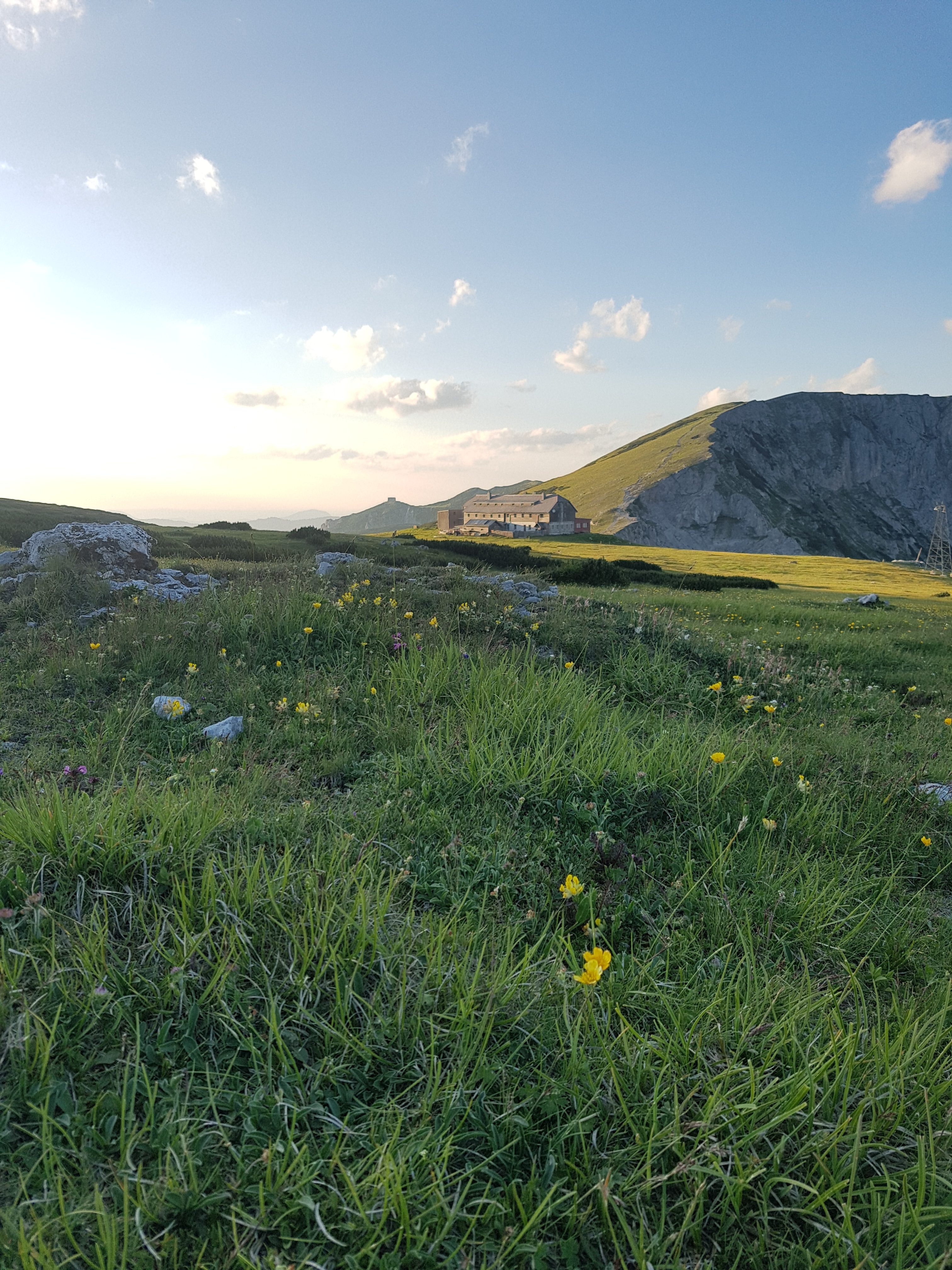 I’ve said in earlier blog posts that for the most part it’s illegal to wild camp in Austria. I don’t know exactly why, but I suspect it’s because the farmers bring their cows up into the mountain pastures for summer, and with no obvious fences or paddocks, it’s difficult to tell exactly where any livestock are, and if they are likely to wander to your tent in the night. Instead, you have huts. Generally managed, providing beds, food and drink (but often not showers) every night. These huts often have epic views too, perched on the edge of cliffs overlooking valleys below. It is an experience of Austria that I would recommend to anyone. 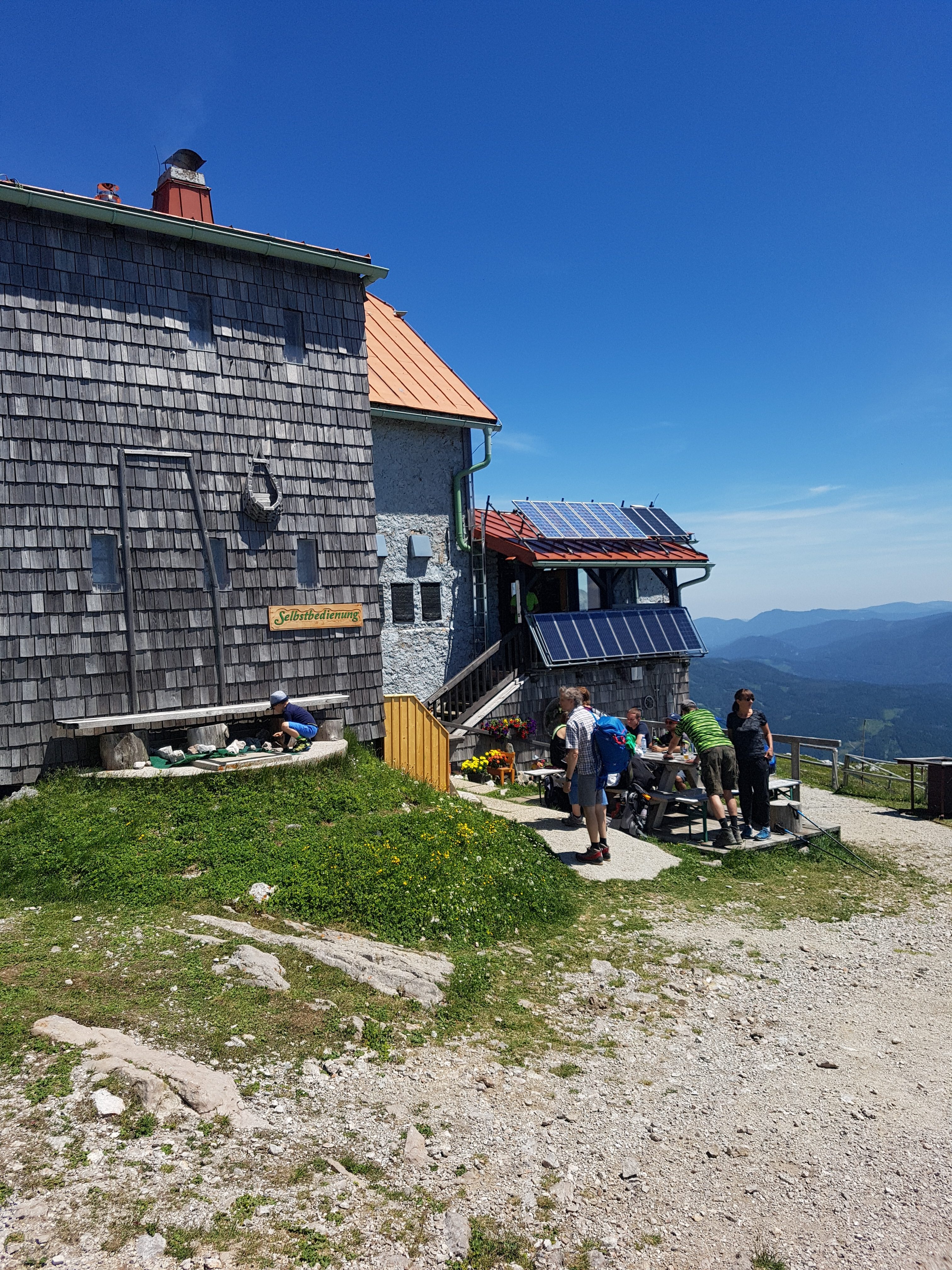 After leaving Karl Ludwig Haus the next morning, I encountered my first difficult moment. The descent down from the plateau was steep, again with ladders and ropes required as assistance. Going down was much more difficult than going up, and I was alone, which didn’t help my confidence. I made it down safely, albeit with extremely shaky legs. However, if I had of slipped I would have fallen a long way and been in a lot of trouble – from that experience I would not recommend completing these sections alone. 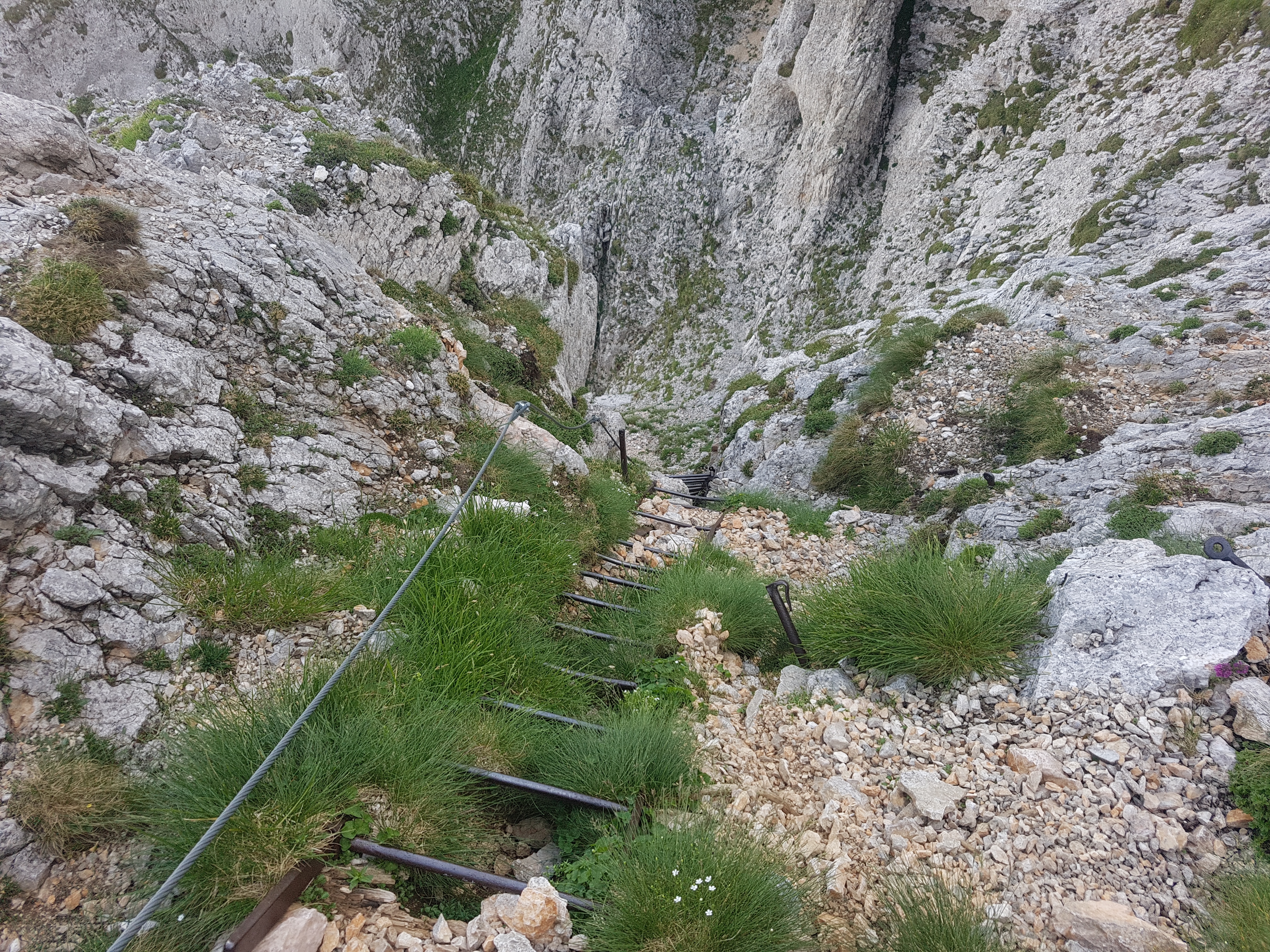 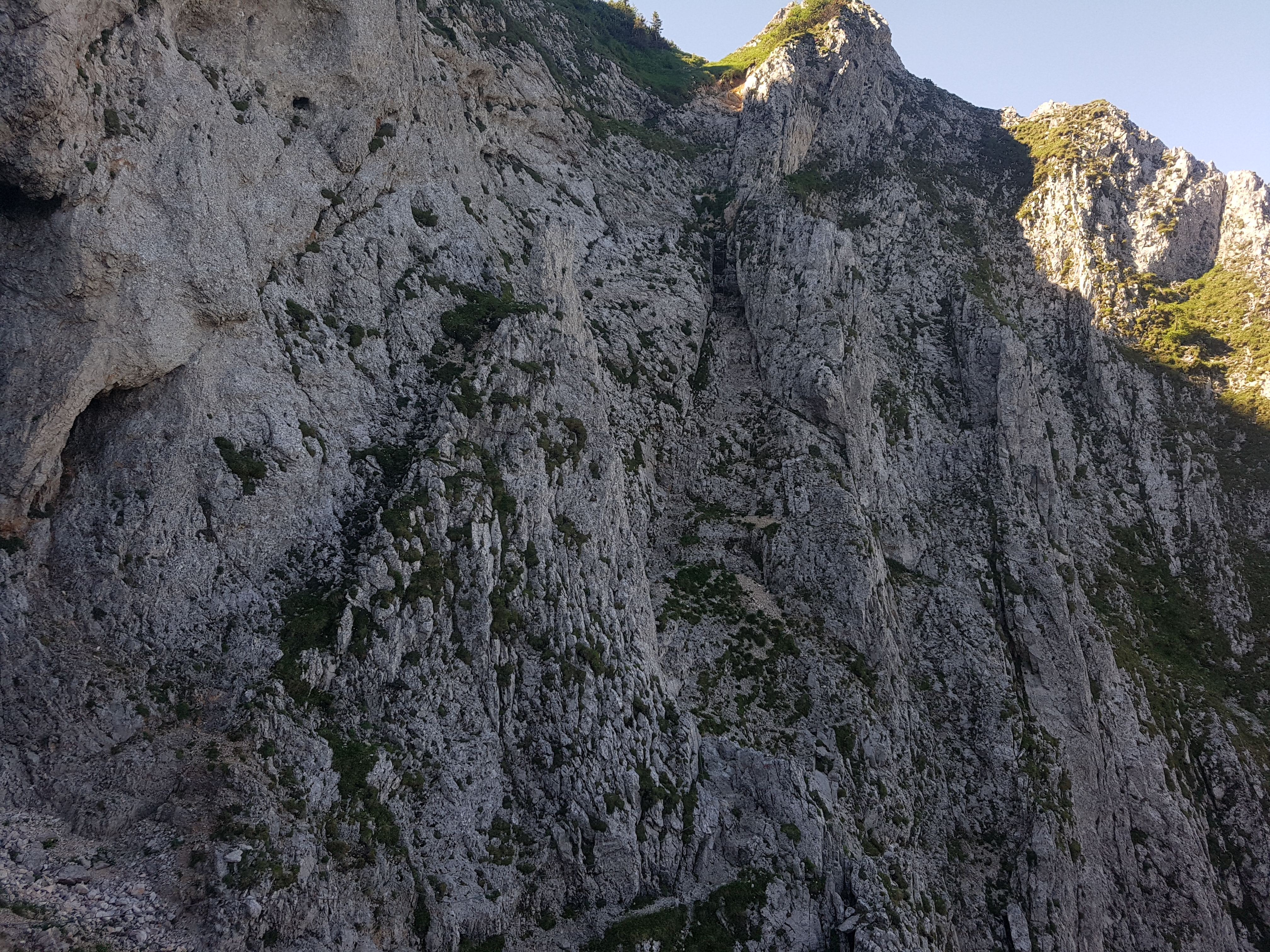 Can you see the way? – Looking back where I’ve just come from…

Up the other side of the valley and onto the next alpine plateau. Cowbells ringing in the distance as the herds graze free over the pastures. The landscape dotted by small peaks, more huts or Alms (small groups of buildings where the farmers stay for summer, and where hikers can overnight). And wildflowers everywhere! It was such a peaceful landscape. I can’t tell you the amount of times I just stopped and stared and enjoyed the atmosphere. This is a landscape like no other, so very Austrian. So beautiful. So peaceful. 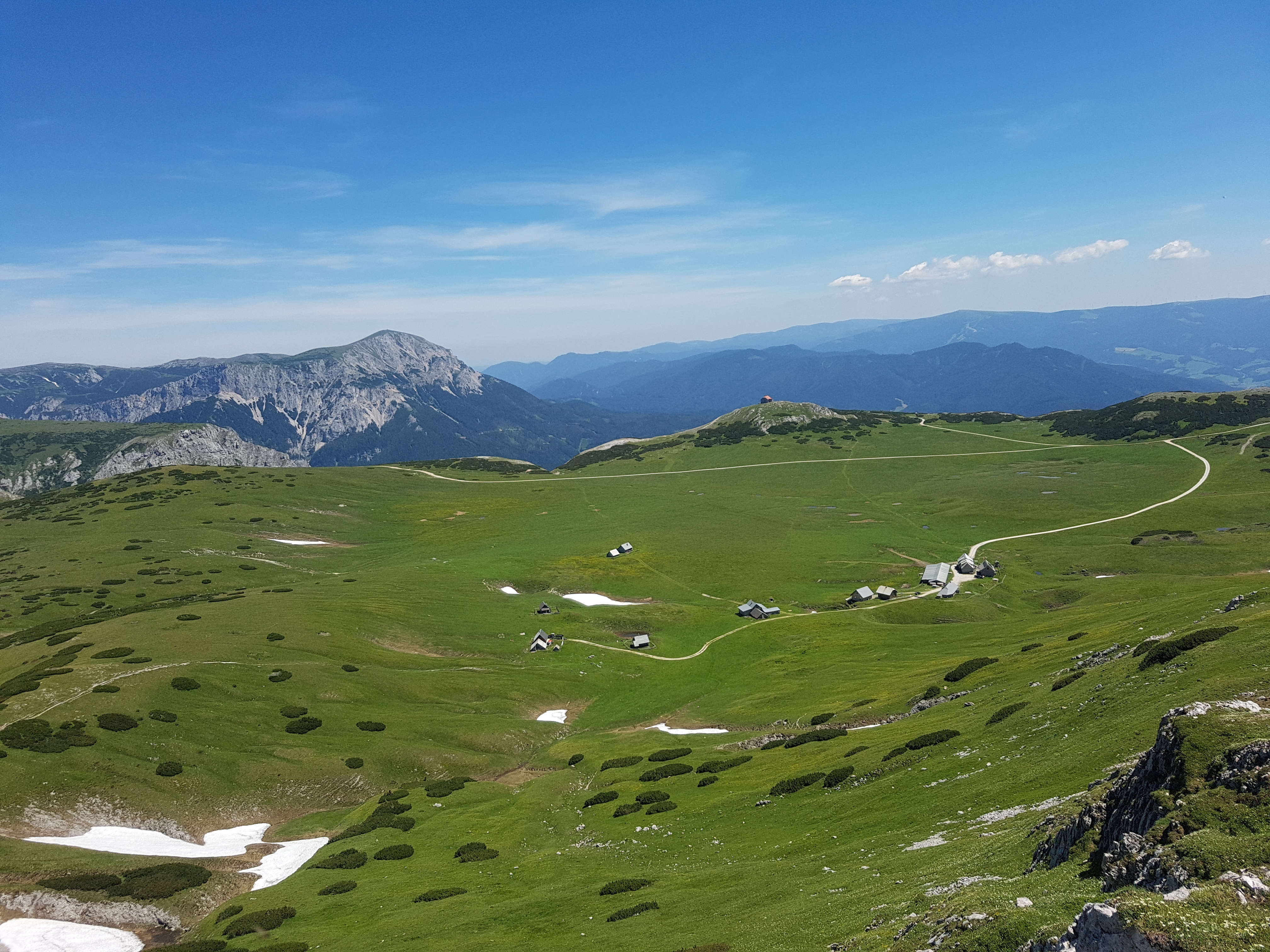 I’ve read that you should write down your reasons for thru-hiking before you start, so that when you are struggling, you have them as a reminder, for motivation. I never did this, but many people asked me this question before I left. I had a number of small answers, although none were too convincing. My biggest reason was: ‘Why not?’. I had the time, the ability, I liked the idea of hiking for a long time. So, why not?

This can be a good reason. It can be a sign of a spontaneity or a spirit of adventure. But this reason falls apart when you actually have an answer for it. For me, that answer was at home. My girlfriend also loves hiking. We are planning to do the PCT together next year. This year, however she couldn’t come with me as she had to work. So, I decided to do this alone. However, pretty quickly I realised that it wasn’t going to be the same without her.

I had worried a little about this before I left. This is most likely our last summer in Austria before we move away, and I was about to spend most of it away from her. Maybe it was excitement, maybe it was sheer stubbornness (it’s amazing what saying something publicly does to your thought process), but whatever the reason, I pushed this to the back of my mind. On trail, however, it became glaringly obvious. I realised that I would rather do a few weekend hikes with her, than spend 6 weeks alone. I would rather share these experiences with her, than experience them by myself.

Now that I’m home, there is of course a part of me that wishes I was still out there. But I know that all things considered, this was an easy choice, and I know it was the right one. And it might not even be the end of the Nordalpenweg for me either – I hope that we can do sections together as the summer goes on. So, I still look forward to my summer in the Austrian mountains. I still look forward to taking photos and sharing experiences and just generally being outside. It will just be a little different to originally planned. And I’m OK with that. To all those still on their respective trails I wish you all the best, and to everyone else, happy hiking!

New Zealander living in Austria. Have caught the hiking bug, and attempting the Nordalpenweg, a 600mile (approx) hike the length of Austria in July. And, further on, the PCT in 2020. Looking forward to seeing what this through hiking business is all about!