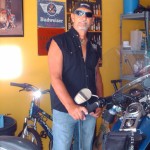 A wet trail can be dangerous!

I'm a 67 year old retiree from a long career in the Oil and Natural Gas industry. I am a native Oklahoman, I have 5 children and 11 grandchildren. I have always been more comfortable in the woods than any other place. I love God and all kinds of outdoor activities, I hunt, fish, kayak, play golf, hike, camp and enjoy God's creation.