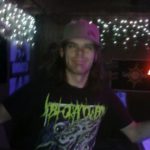 A Funny Thing Happened on the Way to Prospect Rock

So, this is the tale of how I came by my most famous nickname throughout high school.  Incidentally, it could also be considered my trail name, though I never used it while backpacking.  I am hoping to be christened something else, but we will just have to see, won’t we?

It was the summer of 1999, the summer before my sophomore year of high school.  I had been inducted into a group called Upward Bound (not to be confused with Outward Bound; UB was for high school kids looking to go to college and expand their opportunities to do so), and every summer, this involved a unique trip.  The trips varied depending on school year groups.  My group went on an 8 day backpacking excursion on the Long Trail, supported by the Upward Bound RAs and administrators.  It was a blast!  I got my first exposure to Leave No Trace principles, pooping in the woods, vainly trying to wash away days worth of sweat, dirt, and insect matter from a crude spigot; we also slept in shelters, though I truly cannot remember if we had any sort of sleeping pads!  I assume we did, but you know what they say about assuming…

Part of our journey took us to the mighty Prospect Rock, where we were going to learn how to rock climb.  I was less than excited by this, given my aversion to heights and what happens when you fall from them.  Nevertheless, I paid attention.  I learned how a belay system works, the communication commands (all swiftly forgotten by now), and some climbing basics.  Now, it was time for what we called “the baby rock”.  A nice, lenient grade, only about 30 feet in height, should have been a breeze, right?  For most others, it was; for me, eh, not so much.  I was a chunkier lad in school, and hadn’t gotten into playing sports yet, so this type of physical activity was not something I excelled at.  I got a whopping 5 feet up, and was looking about in vain for a spot to put my left leg.  They told me to keep my body away from the rock, but though my mind was willing, my body was most decidedly not.

Finally, I found a spot, reached out with my foot, and the moment I made contact, my knee decided to jump ship.  I watched as my left kneecap laterally dislocated, going from its normal position to floating around in limbo.

The Pain to Come

Oddly, the dislocation didn’t hurt, though it was very surprising.  After I stuttered in horror for a few moments, our guide realized what had happened and quickly popped my knee back in, and they got me down.  Once I was safely lying down on the ground, they were able to call 911 to have me carried out.  I distinctly remember hearing Stephanie, the RA, telling the operator that I wasn’t in any pain currently, but I soon would be.  I never had a chance to thank her for those encouraging words.  So, I am lying there on the ground, folks milling around, mostly unsure of what to do.  They kept me hydrated, but didn’t want to give me any pain medication yet, so it was a hurry up and wait game, my favorite (sarcasm heavily intended there)!

A Long Way Down

After about an hour, four gentlemen with Lamoille County Rescue appeared, huffing and puffing up the trail, and that’s when it hit me.  Using a stretcher to get me down was impossible, so how was this going to work?  Well, they strapped me to a backboard, and lashed the board to carabiners on their belts, and down we went.  I felt so bad for those guys! It was 90 degrees, they wore dark clothing, and it took a good hour and a half for them to reach the ambulance.

Enter: the Leg Brace, my Arch-Enemy

We got to the hospital and got me cleaned up a little bit, and they took some x-rays and some photos, and decided that I had gotten lucky.  I didn’t need surgery, but I would need a leg brace for two full months.  This was awkward, to say the least.  I won’t bore you with the details of how much of a pain in the ass that thing was, but I will tell you that I was overjoyed when it came off!  There was barely any limp at all, though my right hip now rides up higher than my left.  I just go see a chiropractor once in a great while to knock that bad chicken down a notch or two, and I’m good to go!

The second part of Upward Bound was spending 5 weeks on the Johnson State College campus, taking prep courses for college.  We got a taste of living in a dorm, went home weekends, and got to experience college cafeteria food.  Also, we were interacting with other students, both our age and older, so it really did mimic the college experience.  The other thing it mimicked is how quickly names can spread.  The moment I appeared on campus, one of the guys from my group called out, “Hey Gimpy!”, and it stuck.  For all of high school, I was called Gimp, Gimpy, El Gimpe, and many other variants.  It wasn’t until I played Rugby in college that I earned a new nickname, a Rugby nickname.  From then on, I was known as…Curly.  Step up, step down?  I don’t know, what do you guys think?  Until next time, friends, stay healthy, always rock on, and happy hiking!

Hey all, the name's Jared, and I'm attempting to thru-hike the Long Trail this fall! I've lived in VT my whole life in the NW part of the state, and pretty much any overnight hikes I have ever done have been on the LT, might as well finish it! I enjoy music (specifically, heavy metal, prog metal, black metal, death metal...you get the idea! I do listen to all different genres though), reading, writing, history, and being outside! I am a recovering alcoholic, and after years spent ignoring way too much, I am excited to get back outside and start doing the things I love again! Feel free to say hello, drop a comment, whatever, I'm not picky! Stay blessed, always rock on, peace!