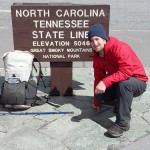 A Journey to the Fiordland: The Greenstone and Routeburn Tracks of New Zealand

In 2009 I went the Middle East as part of a twelve month deployment while serving in the U.S. Army. In January 2010 I traded the harsh, barren landscape of the desert for the lush, green mountains of New Zealand as part of my two weeks of block leave. For six of those days I hiked the Greenstone Track and the Routeburn Track in the South Island’s Fiordland National Park and Mt. Aspiring National Park. Sir Edmund Hillary, the first man to successfully climb Mt. Everest, called the Tracks “the most superb walking in the world”. I was about to find out why.

The Greenstone Track begins at the shores of Lake Wakitipu, New Zealand’s third largest lake, near the town of Glenorchy. It follows the Greenstone River through Greenstone Valley until it meets the Routeburn at the head of the Hollyford Valley. From there the Routeburn leads you past the tree line, over Harris Saddle, and into the Routeburn Valley. It ends near the aptly named Paradise after running twenty miles. All photos were taken by me. 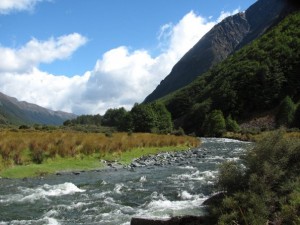 The Greenstone River flowing through the valley of the same name.

To say the Greenstone and Routeburn are magical places is an understatement. If there is a place with more shades of green in the world I have yet to find it. That’s because the Fiordland is a temperate rain forest with some places receiving more than three hundred inches a year! The snowfall rates in the Winter can be epic and snow can remain in places until the warmer months. Even Summer snowfall is possible in the mountains. 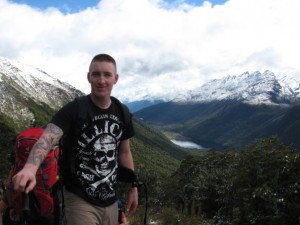 Hiking above the treeline after a Midsummer snow.

The Greenstone Valley, for which the track is named, was formed during the Ice Age when large glaciers covered New Zealand’s South Island. Over the course of tens of thousands of years the glaciers carved dramatic valleys and fjords. The climate changed, the glaciers melted, and the frozen land become rainforest. The Greenstone Valley is named for New Zealand Jade more commonly known as “Greenstone” despite none being found in the valley. The indigenous Maori used the valley as a route to the coast to trade greenstone with visitors who came by sea. 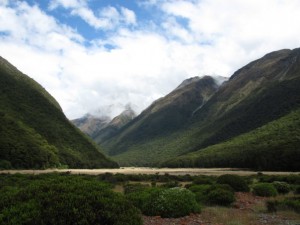 The Routeburn Track is where the Alpine fun begins. It takes you above the tree line over the Hollyford Valley. A short side trail shortly after the trailhead takes you to Key Summit, an alpine bog. At an elevation of 918 meters it offers an impressive views of the surrounding Darran and Humboldt Mountains. During the summer months you can also find the carnivorous Sundew, a sub-alpine plant native to New Zealand and Australia. 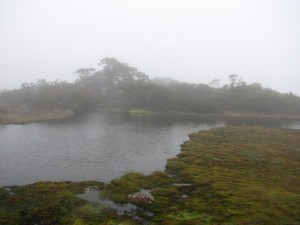 A bit of a bad weather day on Key Summit.

Just a few miles into the Routeburn and you ascend to the base of the 174 meter high Earland Falls. The falls are a highlight but also can be dangerous as the track skirts mere feet from where they splash down. 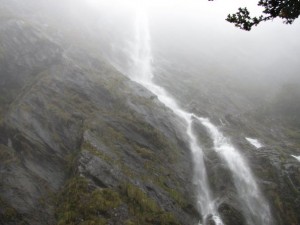 Earland Falls, descending from the clouds.

After Earland Falls you come to Lake Mackenzie and begin to climb above the tree line. During wet periods you can see dozens of waterfalls flowing down every mountain in sight. 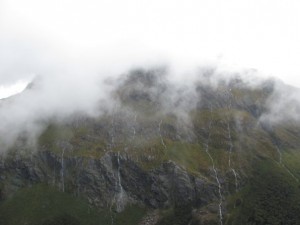 Waterfalls pouring down a mountain above the Lake Mackenzie Hut.

Above the treeline you enter a surreal landscape. Temperate rainforest becomes alpine grassland. This is the realm of the Kea, New Zealand’s alpine parrot. The Kea are endangered due to them being considered a pest and the New Zealand government having a bounty on them until 1970. They are also being poisoned by lead found in roofing materials. Despite them being endangered they are still shot and trapped. 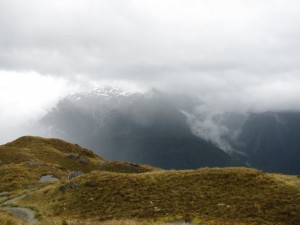 Above treeline, the realm of the Kea.

Eventually, you come to Harris Saddle, the pass that takes you from slopes above the Hollyford Valley and over the mountains to the Routeburn Valley. There is a hut and composting toilet on top of the saddle where you have impressive views of Lake Harris, the Hollyford Valley, and the Darran Mountains where Sir Edmund Hillary prepared for his Everest ascent. During snowy months the pass is treacherous with avalanches being a real danger. 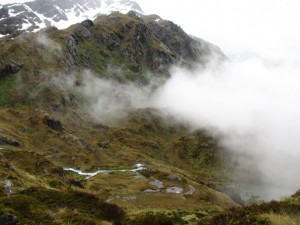 After the long descent back to the treeline you are greeted with a stunning view of the Routeburn Valley from the Routeburn Falls Hut. 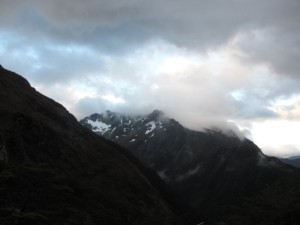 Sadly, there is always an end to the journey. Luckily the Routeburn ends things on a high note. You descend back into the temperate forests for incredible views of the Routeburn Valley. 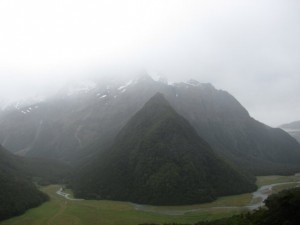 The view above the Routeburn Flats.

And then you reach the Routeburn Flats…. 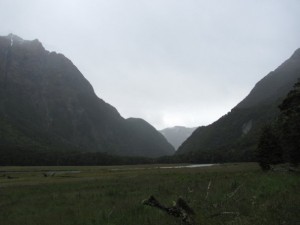 From there you walk through the Valley’s temperate forests and cross the fast-moving Routeburn River by bridge. 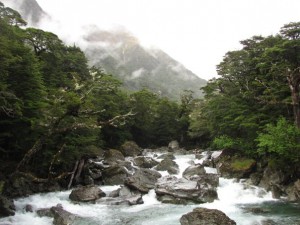 Unfortunately, the Track comes to an end. It’s a trail that you wish went on forever. The Routeburn and Greenstone have a magic and allure which is unmatched. They are truly two of the finest walks in the world. 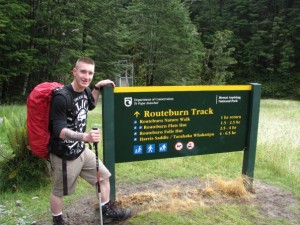 The end of the road.

My name is Chris also known as Cast Away. I am a full time hiker and vagabond who enjoys long walks in the woods, dinners by firelight, sporadic bathing, and an occasional town day. Via the Appalachian Trail I transplanted myself from Alabama to Vermont and spend every day planning next year's adventure.