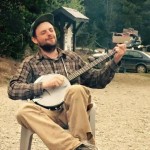 It’s been five months since I left the Appalachian Trail. I am finally getting my shit together to write a final blog about it. There’s been lack of motivation to write since I have been home. Maybe I’m slightly embarrassed about not finishing and I’m scared about what to write. Either way, I don’t care anymore and I need to get this done. I’m in Cumberland, BC now. I just got back from a couple months in Australia. I’m really broke and about to buckle down for four months of tree planting. If I don’t write now then I never will. I am done the trail for 2016 but not for good. I’ll try to be as honest as I can right now about what went wrong, what went right, and what is to come.

I do miss being on the trail. I envy those few people that finished the trail. Throughout October, November and even December I watched fellow hikers online that I summited so many peaks with in Maine and the Whites, slowly make their way to Springer Mountain. I saw the look of satisfaction and fatigue on their faces as they posed victoriously beside the Southern Terminus plaque in Georgia. I was proud of every one of them, but it made me wish I was there. I was supposed to be doing the same thing at that time.

Unfortunately I couldn’t be in their shoes. Due to poor financial decisions,  I was forced to leave the trail early. I stepped off the trail in Hamburg, Pennsylvania and flew back to Vancouver Island. Reality kicked in pretty quickly once I got home. I suddenly realized how stupid I was with my money and how much I didn’t care about the consequences. As much as the trail was the best experience ever, I learned a lot of lessons. At 30 years old I realized that I needed to grow up a little. 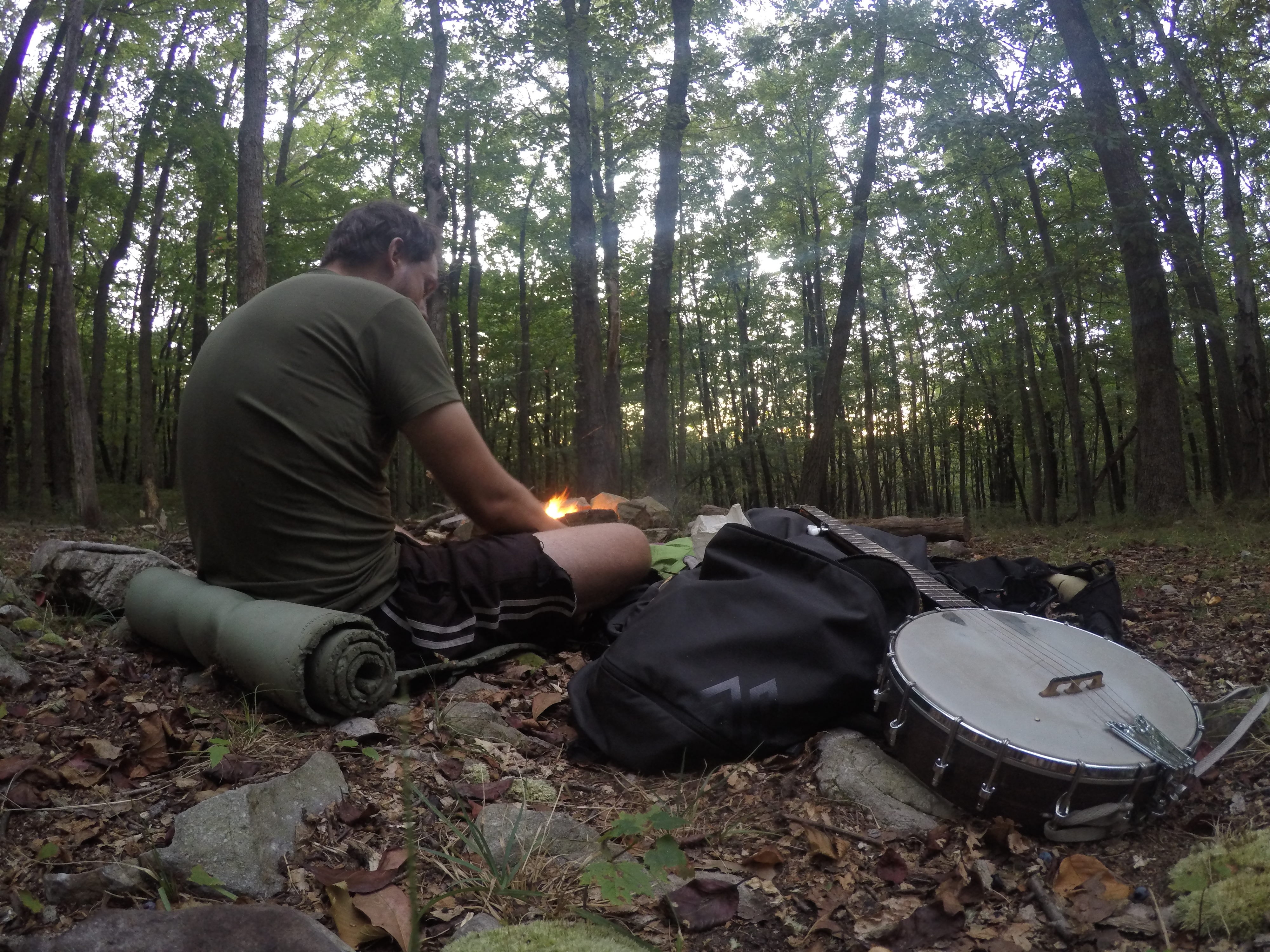 One of my last nights on the trail in Pennsylvania.

If I want to get picky about it, there were a lot of things I totally fucked up on. It has brought me back to earth. I mean lets face it, I was supposed to hike the whole trail in one go and didn’t even do half. I had a bit of an ego in the preceding months. I’d been planning this epic journey, telling everyone about it, really selling it you know? Everyone was telling me how great of an idea it is and how great I am for doing it. It went to my head. Once I started walking it seemed like nothing could go wrong.

So I stopped caring. I began to actually believe that I was unstoppable and could spend as much money as I want and hike as little or as much as I want. It was around the time I went to West Virginia for the Clifftop Appalachian String Band Festival where reality got real! First off, the music festival was humbling to my banjo skills. That’s a given. What else could I expect when I surround myself with the worlds best old time banjo players for a week? It was during that week, however, I realized I wasn’t gonna finish the trail. At least not with the money I had, the speed I was going, and my appetite for delicious pub food. It was a sad epiphany to have, but it had to be had.

This is the main reason why I couldn’t keep going. I was frivolous with my money. I spent way more than I thought I would. It was the towns! Every time I got to town I just wanted to eat tons of food and drink tons of beer and coffee! It really got out of hand. Even after I was broke I extended my credit limit. At this point I should have started budgeting, increase the Ramen Noodles, and decrease the chicken wings and IPA. I didn’t. I just kept spending. It was a big “fuck it; you only live once; I’m on vacation; I’ll deal with the consequences later” mentality. I’ve been dealing with the consequences for five months now and the dealing is far from over. 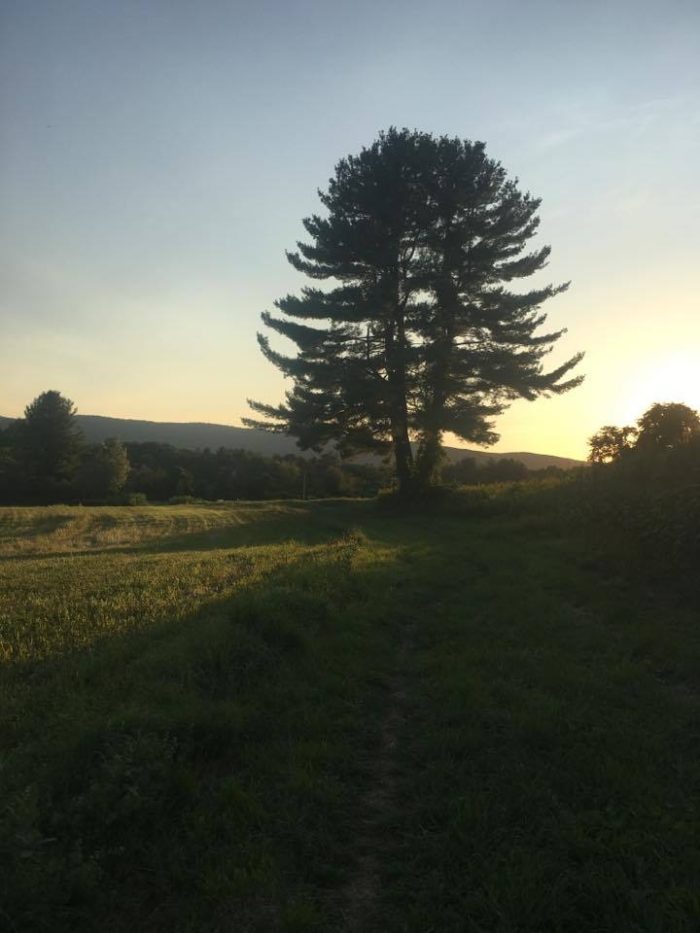 Somewhere on the trail

What Happened To The Film Project?

In my first blog post I announced an ambitious plan to make some sort of documentary about the AT and music along it. The first obvious problem was my lack of experience and knowledge in film making. I’ve never made a film nor have I been educated on how to make one. I had no attack plan. I didn’t know what to film, when to film, how long to film something or what to say to the camera. Maybe I made things more complicated than they needed to be. And when a situation came that needed to be documented, I would either forget, be lazy about getting my camera out, or my battery would be dead. Did I mention how technologically incapable I am?

So I was a little too ambitious. I still got a lot of great footage but there’s a lot that I missed. At the string band festival in West Virginia for example, I didn’t film a damn thing the whole week I was there. Just drinkin’ and pickin’.  I am not abandoning this project but I do need to simplify it and have a clearer plan for it. Right now, it would take an editing genius to make something out of what I got. Any editing geniuses out there that wanna help me out?

Ok, enough with my self loathing! I read back on this and I’m just tearing into myself here. I mean, talk about first world problems! I just spent 3.5 months of my life hiking down a leisurely footpath with a musical instrument. I gotta cheer up a little. I’m being too hard on myself. The adventure was very successful from a different point of view. There are obvious things I must be grateful for. I walked 971 miles (1554 kilometres), I had no sickness, only minor injuries (I fell down a rock scramble and dislocated my shoulder one morning. Popped it back in though) and no hospital visits. I didn’t break the banjo, got a lot of smiles from playing lots of tunes and I made friends. Those are pretty good successes I think. 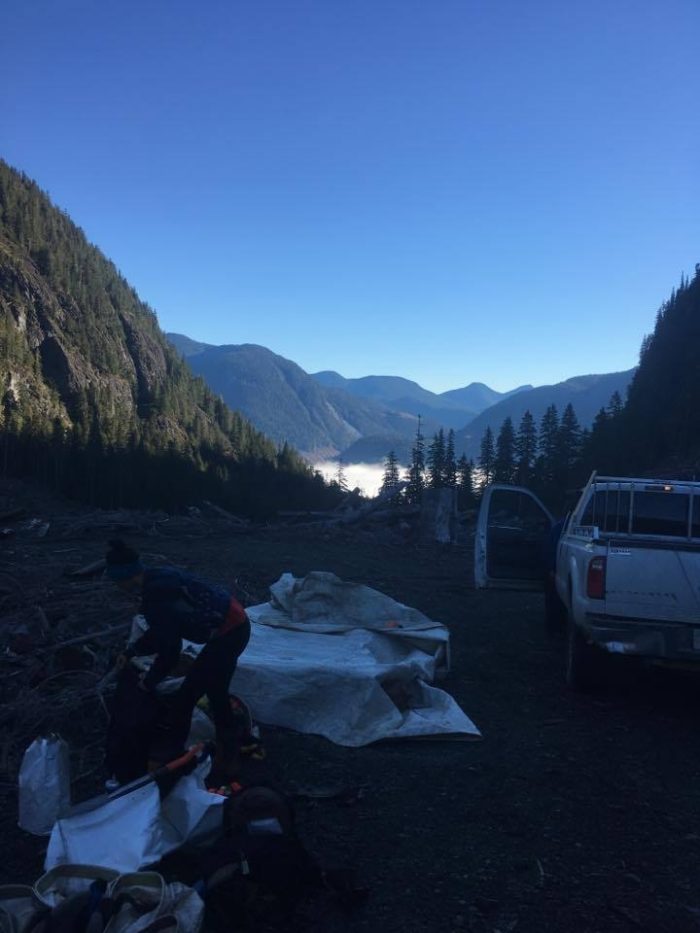 As a tree planter on Vancouver Island, going back to work after the AT wasn’t so bad with views like this one.

This was something I was super nervous about bringing that actually turned out to be the best decision I have ever made. That is all. I’ve overkilled this topic in previous blog posts so I won’t spend much time on it. It was 100% a success. I will always bring my instrument for all future wilderness adventures. I recommend any musicians (even non-musicians) who read this to do the same. It’s good for mental health.

Not Finishing: A Blessing In Disguise?

For as much as I say not finishing was a failure, It could also be seen as the opposite. Maybe it’s the best change in plans that could’ve happened. If there is one downside about thru-hiking such a long trail that I have noticed, it’s the anxiety people have about finishing on time. I saw a lot of thru-hikers in some weird mental states of high stress. Not because they were sore, they hated the rain, or were hungry, but because they were worried they wouldn’t finished the trail before x date. This was most evident as I passed the NOBO bubble. They had to summit Katahdin before Baxter State Park closed on October 15th so they had to keep a certain pace.

Now, everyone has their own reasons for hiking. Many hike strictly for the sake of doing the whole thing and that’s fine. That is their ultimate challenge that brought them on the trail. It was my intention when I started as well. I am sure when they summited Katahdin some month or two later it was all worth it in the end. The feeling of accomplishment they had was probably incomparable to anything they’d ever experienced and they’re probably glad they pushed on instead of taking too many zeros like I did.

For me the challenge of completing a thru-hike, it turns out, was not why I was on the trail. Stressing about getting somewhere at some time was not my intention. Testing my physical and mental endurance was not the primary challenge. Testing myself to see if I was capable of living in the woods under harsh weather conditions was not the goal. That stuff happens in my tree planting job back home. In tree planting I go into the rain on a windy mountain side because it’s my job, and I push myself mentally and physically because it pays. On the AT, I wasn’t happy forcing myself into uncomfortable conditions if I didn’t have to, or going 3 more miles when I didn’t feel like it. The few days where I cleared 20 miles were not fun. I felt free out there being alone, not having an agenda, or an itinerary where I was scheduled to be at certain checkpoints at certain times. I wanted to experience America. I’ve never spent time in these parts of Eastern United States before. I didn’t want to rush through. I didn’t want to miss everything by doing 25 miles a day, every day. The trail isn’t going anywhere. I now have a reason to come back.

As I sit here, I’m excited that I have unfinished business with the AT. I still need to see a rattlesnake. I still need to see the deep south where Appalachian mountain music lives. I want to go back to Clifftop and be part of that community. I want to keep learning their music while sharing music of my own. I’ll go back next summer. and keep walking South for another few weeks. I’ll probably only get somewhere into Virginia, but that’s fine. I can just go back again next year, and the year after that and keep walking. Section hiking is my new thing.