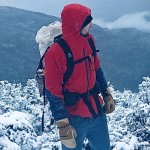 Like many prospective PCT thru-hikers, I read the PCT Association’s statement on March 19th with overwhelming disappointment. Others eloquently express the anguish of the thru-hiking community over the past few months; I share these emotions, but I do not suppose that I could add anything that has not already been said, and so I won’t. That is not what this post is about.

Life doesn’t always go according to plan. Sometimes you can do the research and the preparation only to face an insurmountable setback. These are some of the most difficult setbacks because they leave you feeling helpless. In your perceived helplessness, you wonder why you tried in the first place. If you’re not careful, they can make you resentful and damage your resiliency.

I admit that I experienced these negative emotions when it became clear that I would not hike the PCT in 2020. However, large setbacks often present unexpected opportunities. I began searching for something to dedicate my “hiking self” to this summer, and I soon came across the White Mountain Direttissima.

The White Mountain Direttissima is not a trail but an idea: hike all of the (48) 4,000 footers of New Hampshire in one continuous hike without resupplying. This brutal endeavor spans about 240 miles and 80,000 feet of elevation gain, depending on the route taken. Variables such as difficulty of terrain, personal health, and unpredictable weather conditions have kept the number of finishers very low. I do not know the exact number, but I believe it to be around ten. 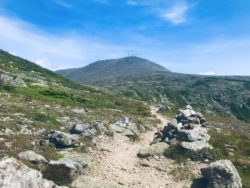 In both cases, one carries all their own food and gear, and one does not accept any targeted physical assistance from outside sources. The differences that have been set by precedent, which I intend to adhere to, are as follows: I will take water from the Appalachian Mountain Club (AMC) Huts, I will drop my full pack for “out-and-back” sections, and I will invite others to join me on sections as moral support.

I will be using two forms of verification to confirm my hike. My GPS watch will record individual days of the hike and upload the data to Strava (I will send out my Strava link in a later post). I will also be carrying a Spot device that will update my live location every 10 minutes. I am hesitant to upload a link to the internet with my exact location for several days, but I am happy to send it out to individuals as long as I can vet them beforehand.

Another logistical note worth mentioning is my reasoning for choosing the Direttissima. I live well within a gas tank’s range from the start of the Direttissima, and I live even closer to its end. This seems like the perfect project because although it is a large commitment, it is both local and contained by design (no resupplies). I plan to adhere to all Forest Service rules, and I have been closely monitoring the status of the AMC Huts, campsites, and trails. 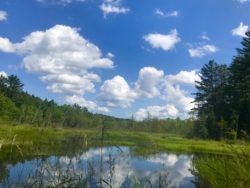 The goal, of course, is to break the self-supported record, but I hesitate to set a goal of a time beyond that. There are many confounding variables such as unpredictable weather in the Whites that render exact estimates rather inexact.

My next post will be dedicated to the specifics of my strategy and chosen course, but I will outline it briefly here. Suffice it to say that my route is not original. There are numerous and ingenious ways that people have approached the Direttissima; after evaluating several routes, I decided that Drummond’s matches my style of hiking the best. His route also contains a solid amount of “out-and-backs” during the first few days, which fits my strategy of loading bigger mile days at the beginning. I have made several changes to the route (which I will cover in the next post), but the vast majority is the same.

The route starts at the base of Mount Moosilauke, traversing the Kinsman Range and then Franconia Ridge. After a brief excursion to Owls Head, the rest of the Pemigewasset Wilderness area is covered before diving south to the Sandwich Wilderness. The route then circles back north to cover the west side of Crawford Notch before crossing the road and hitting the southern half of the Presidential Range. After grabbing Mount Isolation, the route crosses Route 16 to traverse the Carter-Moriah Range. Skirting back over Route 16, the Northern Presidentials are hit, followed by a large road walk that leads to the base of the Pilot Range, where the route is ultimately completed by peaking Waumbek and Cabot.

Time to Get   Going

This is a 30,000-foot view, but I wanted to give a brief description of the route in this first post. I have put off writing this post for some time because I realize that talk is cheap when it comes to something of this magnitude, but I also want to be open and allow others to share in this project. In the meantime, I continue to train. Keep an eye out for more updates on the Trek and on my Instagram (https://www.instagram.com/_will.peterson/) as I get closer to go time.

21-year-old college student studying neuroscience and psychology. I'm a long distance hiker. I've hit 61 of the New England 67 4000 footers, and I thru-hiked the AT NOBO in 2019. I just recently broke the record for the fastest unsupported White Mountains Direttissima, setting the record at 5 days 13 hours and 5 minutes. Follow me on instagram @_will.peterson