A Smoky Climb Down from Grizzly Peak

The past few days have been both mentally and physically taxing on us. Trail Maintenance has increased dramatically, which is lucky for us because so has the steepness of the inclines. One of the steepest inclines we had to conquer was a 750 ft/mile up Grizzly Peak. The PCT does not go up to the top of many peaks in this area and the trek up for southbounders is significantly more aggressive than what northbounders see on the other side. We are so thankful to have done the climb on a cool evening rather than a hot day.

Every extra mile we could muster into day 5 would mean 1 less mile to town on day 6, so we pushed 23.4 miles all the way to the top of Grizzly Peak. All of the normal tent spots were taken by the time we arrived, forcing us to be creative in selecting where our home would be for the night. We have been told that a huge hiker bubble is headed our way from Snoqualmie, and while 4 tents popping up before we arrive at a location is far from a bubble, it is the first time we have encountered this.

The sky was clear as could be as we sat next to the tent watching the sunset. Well, I opened the far flap of the tent so that Brianna could hide from mosquitoes and still enjoy the view. Clueless that these clear skies were not to last, we passed out to the of pikas pikaing, crickets cricketing, and the occasional jet plane on its way to Seattle. 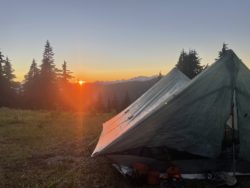 My eyes opened at 3am, something was different, not right. I turned my head to see Brianna’s eyes were also open, “That smells like smoke,” I said to her. “Yep,” she quickly replied.

We had seen a fire to the east as we muddled through the day’s climbs. The wind was blowing the smoke north at the time and not so much as a smell existed for us to have known it was there by nose. A midnight change in winds and temperatures brought a thick layer of haze on top of us. It looked worse in the valleys to the north, but it was bad enough where we were that sleeping through it just wasn’t a viable option. Plus, there is something unsettling about waking up to smoke. You assume it’s the fire you know about, but what if it’s a brand-new fire that you have no way of knowing about?

We popped out of the tent and directly into the morning camp chores, me making coffee, and she packing up our sleeping kits. Strop waffles started our breakfast, biscuits and gravy capped it off. In no rush to ridge hike in the dark, we took our time eating, taking breaks to look at the stars. Civil twilight begins just after 5am in these parts, providing a thin light across the horizon that was enough light to see our feet, so that’s when we finally left camp.

Even with the slight light of the rising sun to the east, burning red coals from the fires were visible as we hiked downhill. There were now two plumes of smoke, whereas yesterday there was one. Unexpectedly waking up at 3am to smoke makes for a challenging day all on its own and walking in the smoke did not help. We tired quickly, and didn’t cough or have stinging eyes, but we felt it in every breath we took. With buffs over our faces, we raced the 14.4 miles into Stevens Pass. 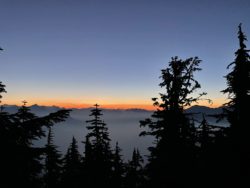 Arriving at noon, 2 hours before our ride into Skykomish, gave us plenty of time to relax in the shade of what had become a 90-degree day. We picked up and sorted through the resupply boxes Mel sent to the lodge for us. These boxes had all of our normal food, plus extra goodies: gummy worms and bears for me, skittles and Reese’s for Brianna. And if that wasn’t enough, The Trek also sent me a ‘thank you’ bag with a new buff and all the snacks you see below. None of The Trek snacks nor the gummy worms made it out of Stevens Pass alive. You see, because of my zombie fly notes, I came into town with a completely empty food bag.

Anthony, our lovely host and trail angel for the night, picked us up from the Stevens Pass Lodge… but that is a story for tomorrow.