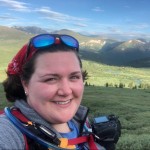 An Intro to Life on the PCT!

I flew out to San Diego with a friend of mine that I went on my first hike with. It seemed almost fitting that she would accompany me to start my first thru hike. The night before we left for Campo, the dreams I had were… interesting… to say the least! I woke up well before my alarm, somewhat jittery and so unsure of what was to come. I packed up my pack, put the things I was sending home with my friend together, and got ready for the day.

Getting to the terminus felt so surreal – almost as if I had entered an alternate reality. Is this real life? In the years and months leading up to starting the trail, I had envisioned what I thought that moment would feel like. What it actually felt like wasn’t what I had expected. What I felt was pride, excitement, and an eagerness paired with calm – I didn’t expect that last one! The border wall is so much taller than it looks in pictures! It felt like an ominous reminder of what it is – a barrier. I took pictures at the monument and spent some time with my thoughts. I was beaming!

It came time to say my goodbyes with my friend and the terminus and start my trek north. The trail follows the road to the terminus for about a quarter mile, so I got to walk while my friend drove for a short time. Watching her drive away, I was confronted with a feeling that I hadn’t felt yet that day – anxiety. The all-consuming feeling of “now what” sank in and I started thinking “am I really ready for this?” I replayed my preparation in my head and came to the conclusion that I trust myself and my abilities and that everything will work out. 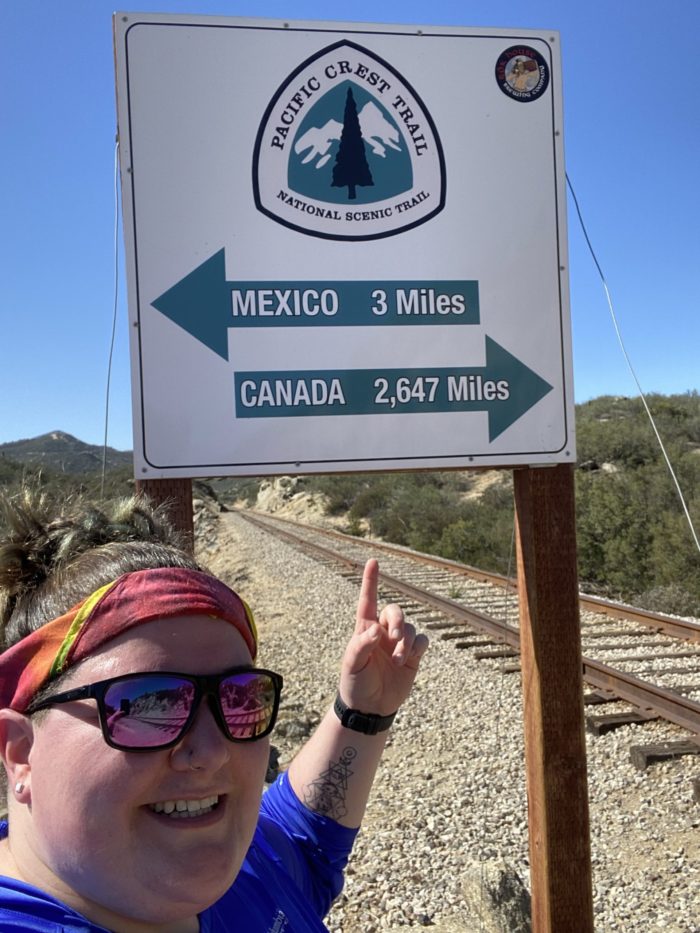 All the anxiety I had melted away about a half mile into the morning. I came across a table of trail angels greeting hikers, giving water reports for the first 5 miles, and setting up a support system that sets the tone for the rest of the hike! I spent some time with them and talking about the trail. Feeling supported so early in the trail eased so much anxiousness! Legend, Papa Bear, & Dodger – thank you for what you do! 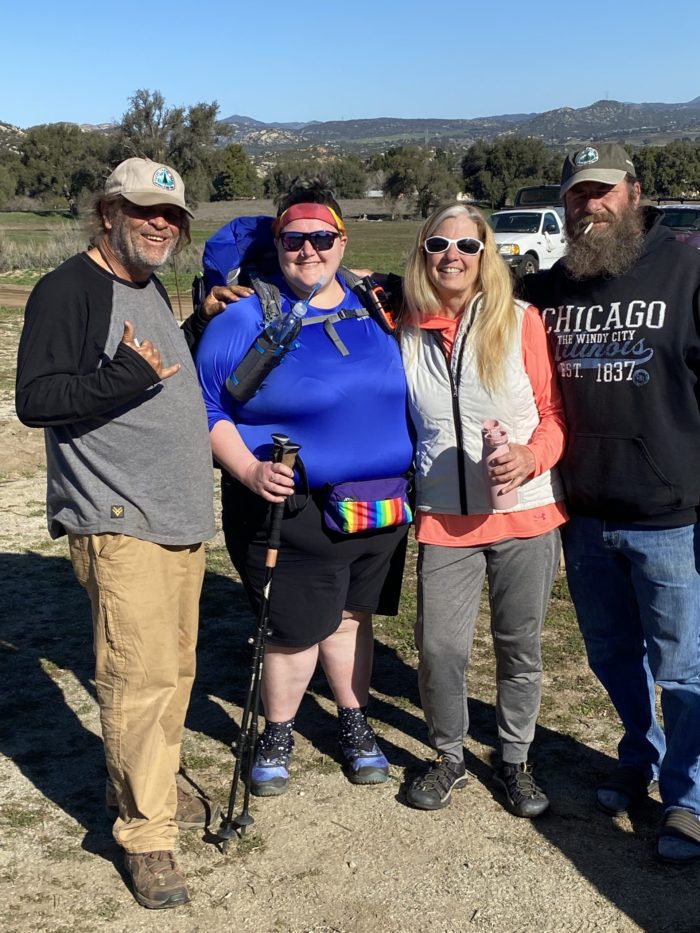 After leaving the campground where the trail angels set up, I felt a new pep in my step and continued up the trail feeling on cloud nine! I felt amazing! My body felt good! Things were going smoothly! I tackled the first 4.4 miles in just a few hours! I got to the water source at mile 4.4 around noon and sat in the shade and drank some cool and fresh water (filtered of course!). While I was at the stream, I had met some hikers that stopped to fill up too. We sat and talked for a bit – asking the usual questions: where are you from? Where are you going today? Why are you here? We stayed at the stream for about 30 minutes and then decided to continue on.

The beginning of a love/hate relationship with the sun

Leaving a shady spot to hike on in the middle of the day is (I know now) not a great idea. I had planned on getting to the campsite at mile 7.4 and seeing how I felt – if I still had fuel in the tank, I would continue; if not I would camp. It took me longer to hike the remaining 3 miles for the day than it had to hike the 4.4 in the morning. Hiking through the heat of the day zapped all of my energy. The last mile was especially grueling. I found myself checking the FarOut app every .2 miles begging the universe to finally let me get to camp! Eventually, I made it to camp and dropped my pack and sat down on a rock. The thought of setting up camp seemed like cruel and unusual punishment. I felt dead.

I felt as though I was starting to melt and that in any second, I would slump to the ground in a pool of hot wax. Not too long after I plopped down at camp, the sun began to set behind the ridge across from my camp. As soon as the sun ducked behind the mountain, the shivering began. The immediate temperature switch from feeling like I was sitting on the surface of the sun to feeling like I was dropped in the Antarctic Tundra is unlike anything I had experienced before. I had been told that the desert was an environment of extremes, but couldn’t fathom what it would feel like until I was actually in it.

Once I acclimated to the new environment after the sun went down, I set up camp. One of the biggest fears I had coming into this trip was camping alone. The idea of being in the wilderness alone is something that I had never done and was really uncertain about. Up until this point, the day had been quite a roller coaster and I felt that I had learned so much already. The day definitely set the tone for how the rest of my hike would play out.

I had seen a couple more hikers pass by my camp, but they were all planning on hiking a bit more. As the sun set more, it seemed more and more like a reality that I would be hiking alone that night…. umm… ok. The day had already felt like a roller coaster of emotions and lessons! As I settled into my tent and cuddled up into my sleeping bag, I reflected on the day. I knew the trail would test me and push me past my comfort zone. I just didn’t expect is on Day 1! 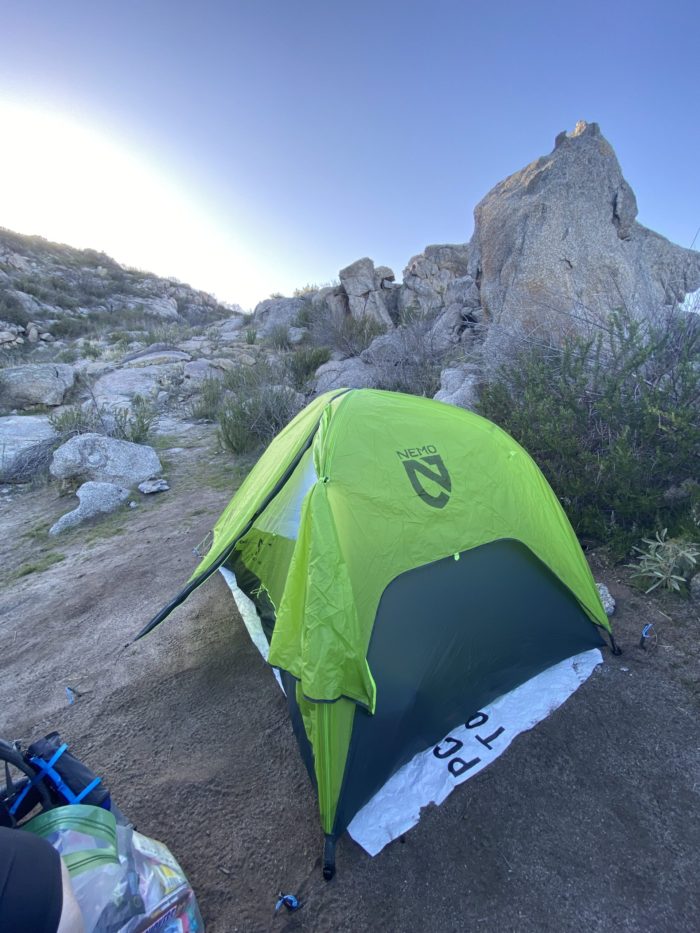