10 Days In: The View from Nantahala

(Note: most info on Cherokee place names is taken from a 1916 book reproduced at this site. I don’t know how reliable it is, but the author was clearly familiar with the language and informed about the cultural history of the region.)

It’s been a long couple of days since I left Dick’s Creek Gap, and started the steep climb up to Carolina. I feel like I’ve been through the first real endurance test of the endurance on the trail, four tough 15-plus-mile days going up and down and up again, cresting mile-high peaks and camping in cold, blustery gaps. I’ve had my first round of “why am I doing this again?” moments, but also those wonderful times when the peaks stretch out into the distance like a jagged carpet and I feel on top of the world.

It started on Yunwi-Tsulenunyi (Standing Indian Mountain), the morning after my last post. My knee pain had finally left the night before, and though I’d climbed 1100 feet I still felt fresh. I was thinking of taking a zero day before the Smokies, and the Nantahala Outdoor Center was right in the path of the trail 49 miles ahead. Why not make the distance in three days, and spend Thursday there? So I made the call and booked two nights at the NOC. 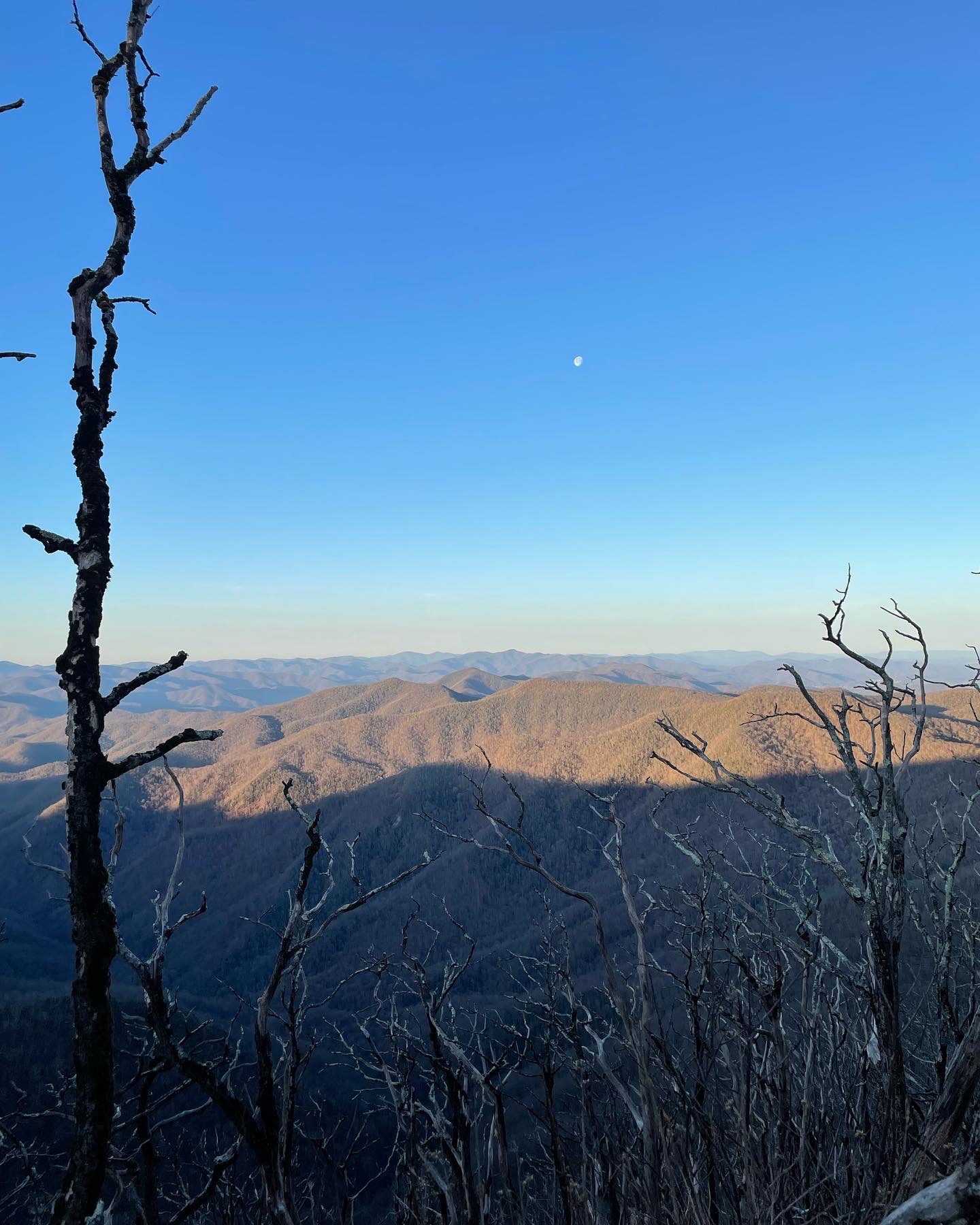 The morning view from Yunwi-Tsulenunyi, “where the man stood.”

That day, I went down Standing Indian and up and over Albert Mtn, camping in a place called Glassmine Gap. It was a blustery, lonely place, and when I heard scuffling in the night I was a little spooked. I turned on my headlamp and looked outside to see a deer mouse running back and forth rustling the leaves. It barely seemed to notice me or my light and just kept rummaging around next to my tent door. So much for bears!

I was tired the next morning and had outpaced my fellow hikers from the previous two days. I had breakfast on a ridgetop before Winding Stair Gap, chatting with two guys from Connecticut along the way. At Winding Stair, many hikers go down to Franklin,(formerly the Cherokee town of Nikwasi), but I kept on hiking up towards Siler Bald. It was a steep climb up a side trail, but gorgeous views on top, and I was thru-hiker selfie #40 for some local ladies out for the day. 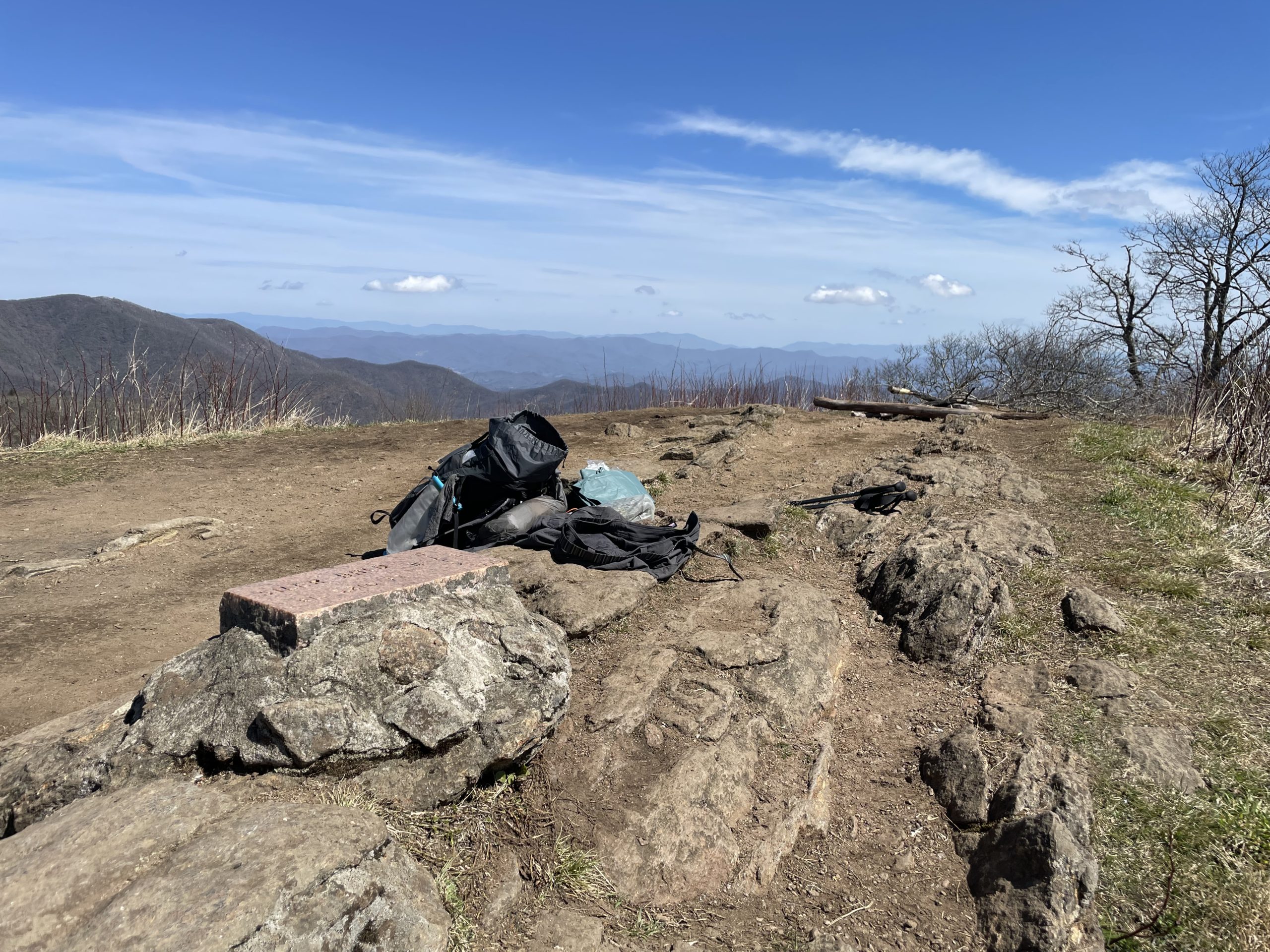 After that, there was another deep dip down to Wayah Gap, and then 1100 feet up again to Wayah Bald (waya means “wolf” in Cherokee). This might be my favorite spot on the trail so far — the tower has views all the way to Georgia and the Smokies, and at 5300 ft it’s one of the highest peaks around. By the time I came down, though, I was sunburnt and exhausted. I got to a tent site near the next shelter and pretty much collapsed. 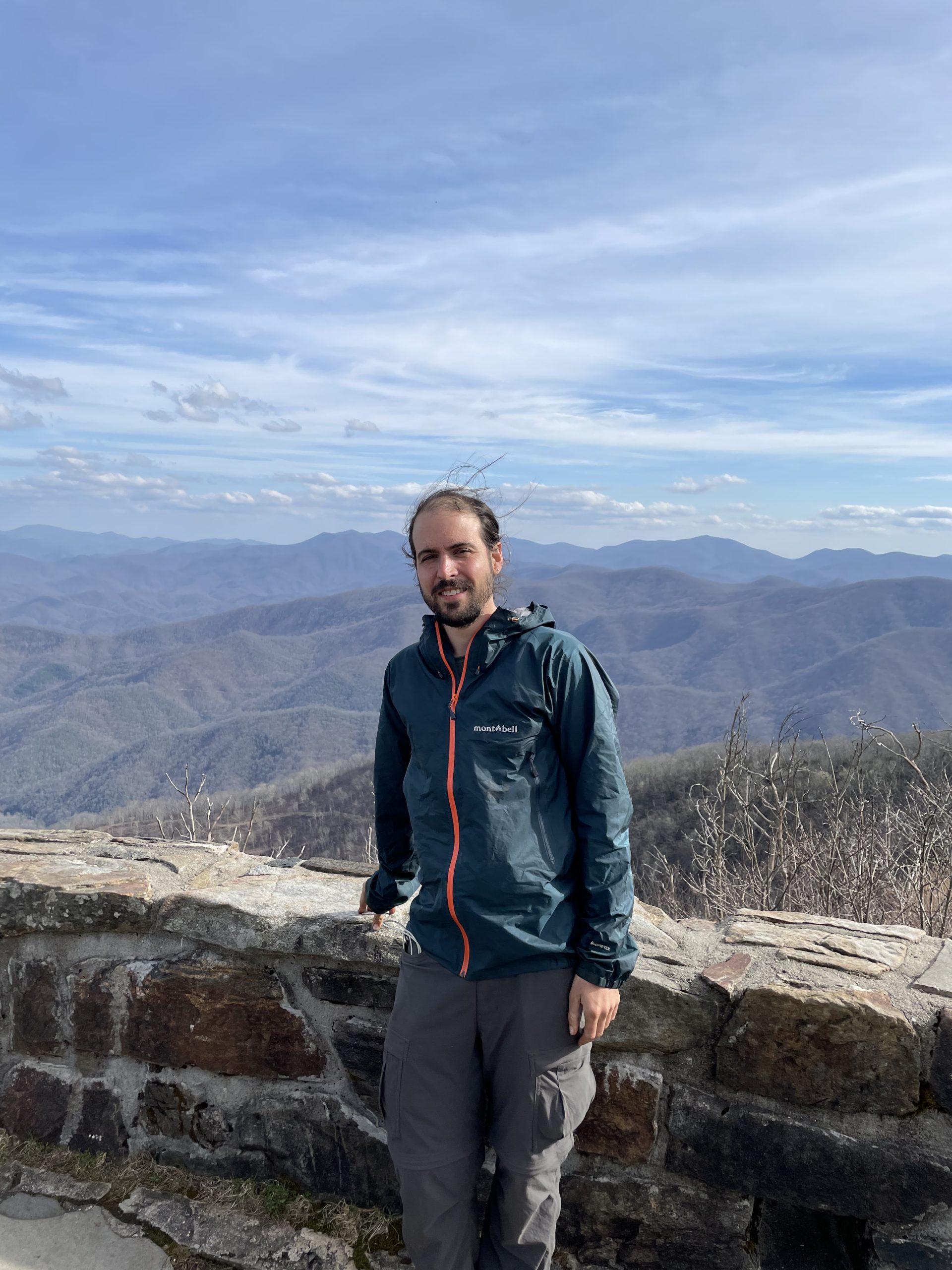 Striking a pose in front of two full days of walking. You can see Yunwi-Tsulenunyi just to the right of my head.

The rain started overnight, and I woke to a damp tent and a slightly deflated air mattress. I packed up as quickly as I could and trudged off on my way. I hit another shelter in five miles, where I squeezed in and cooked oatmeal with some other hikers. By some miracle, it cleared up around noon, and by Wesser Bald, I had a chance to dry my gear. From there it was down, down, down to the Nantahala along a rocky ridge. At about 3000 ft flowers started to bloom, and down here in the valley, you can almost believe it’s spring. I’ve been joking that I’ve arrived in Rivendell, and I’m resting up here for the next stage of the quest. 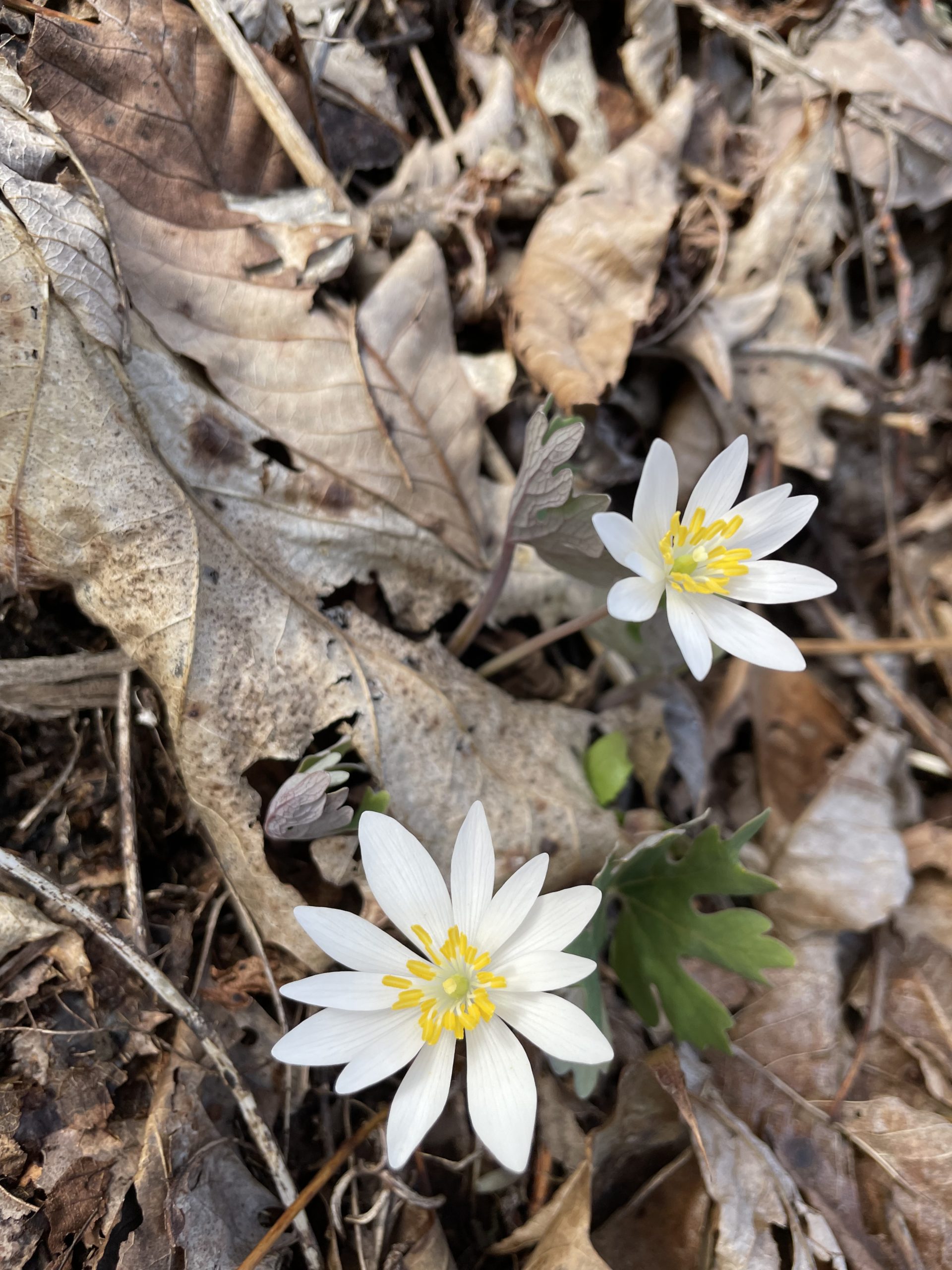 Taking Stock and Looking Ahead

So, as I take this rest in the valley of the Midday Sun (Nundaye li = “Nantahala”), it’s a good time to take a look at where I am in my hike — how things have changed for me since I started, and what I see lying ahead. I’ve walked over 100 miles and climbed over 30,000 feet, so even though I’ve barely started I’ve come far enough to learn a few things. Let’s start with…

All things considered, my gear has stood up pretty well so far. I’ve only had to make a few little tweaks, with one big exception — my boots. Around mile 80, the sole of my brand-new Keen hiking boots began to separate from the shoe, and it was bad enough by the time I got here that I had to get them replaced. I’m not the only one, either. I ran into a guy who already had to replace the same shoe for the same reason. The outfitter here at NOC wasn’t surprised at all, and told me Keen is “having production issues this year.” So I bought myself a pair of Merrell Moabs and am sending the Keens back to the manufacturer. I hate to say it, but don’t buy Keens this year. They might as well be held together with Elmer’s glue. 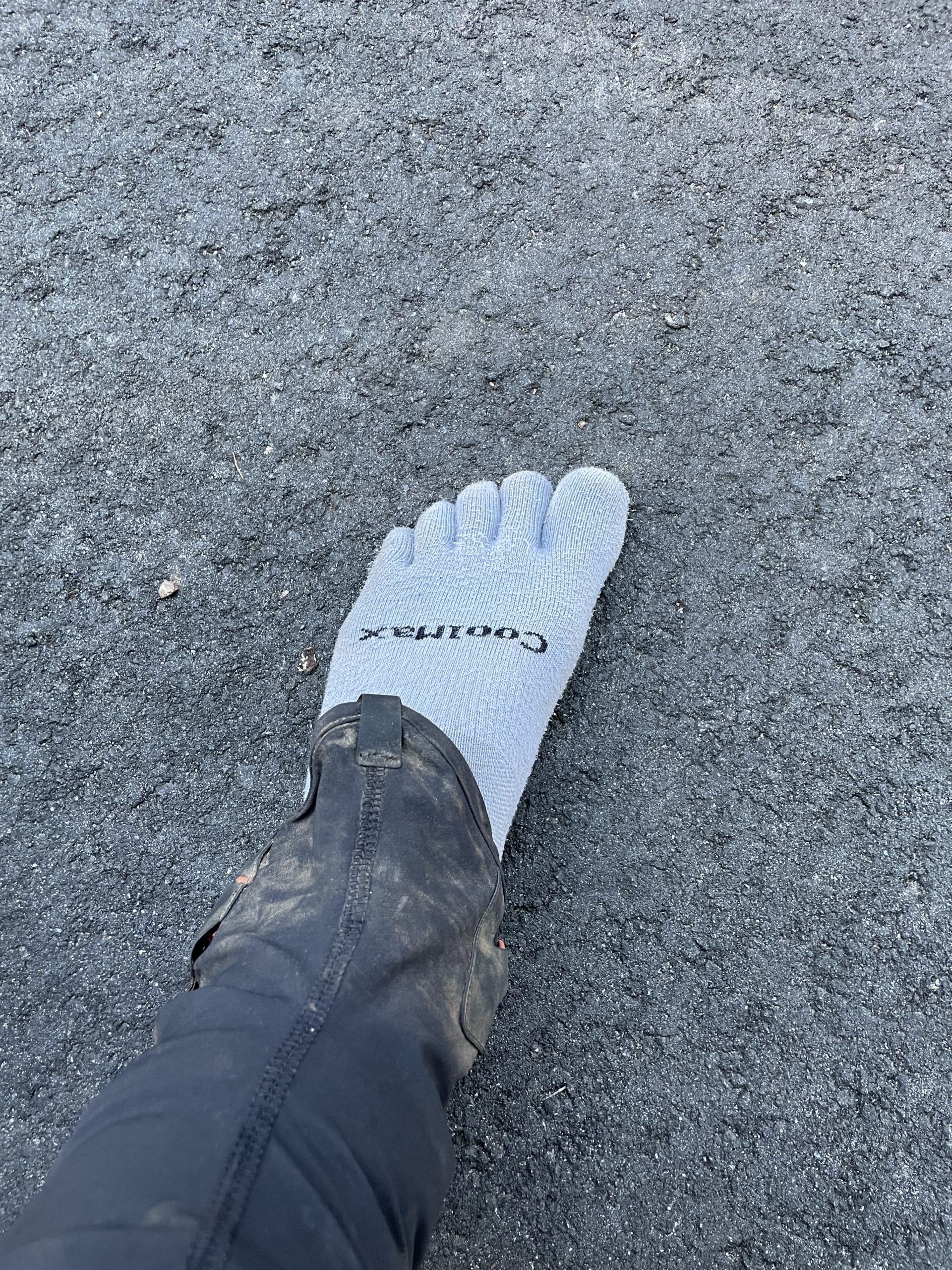 My new socks, fresh from the ‘loaner box’ at Hostel Around The Bend. The trail provides.

Apart from the shoes, I picked up a contractor bag as a pack liner at Neel Gap, and swapped out my Injinji toe socks for a different pair when someone took mine from the laundry at Hostel Round the Bend (“the trail provides”). Those toe socks are really phenomenal at preventing blisters! I also picked up a second pair of Injinji liner socks, a hat for the sun, and a Frog Toggs poncho to cover the gap between my back and my pack when it rains. It worked pretty well yesterday, and no water seeped down the back of my pants. Finally, I’ve moved from a single eight oz. fuel can to two four oz. cans because they’re easier to pack. Weight distribution is everything!

Oh, and I just sent my hammock home. I really wanted to use it as my ‘couch,’ but I just don’t have the time to relax, and 12 ounces of weight is a lot to cart around. RIP Kammok Roo, maybe I’ll see you in the summer!

I started out thinking that I’d pack in most of my calories, and supplement with foraged plants along the way. Well, I’ve had some nibbles, but so far it’s too early in the season to forage. Also, packing enough weight to replace all the calories you burn along the trail just slows you down and makes you burn more calories, which makes you need more food. 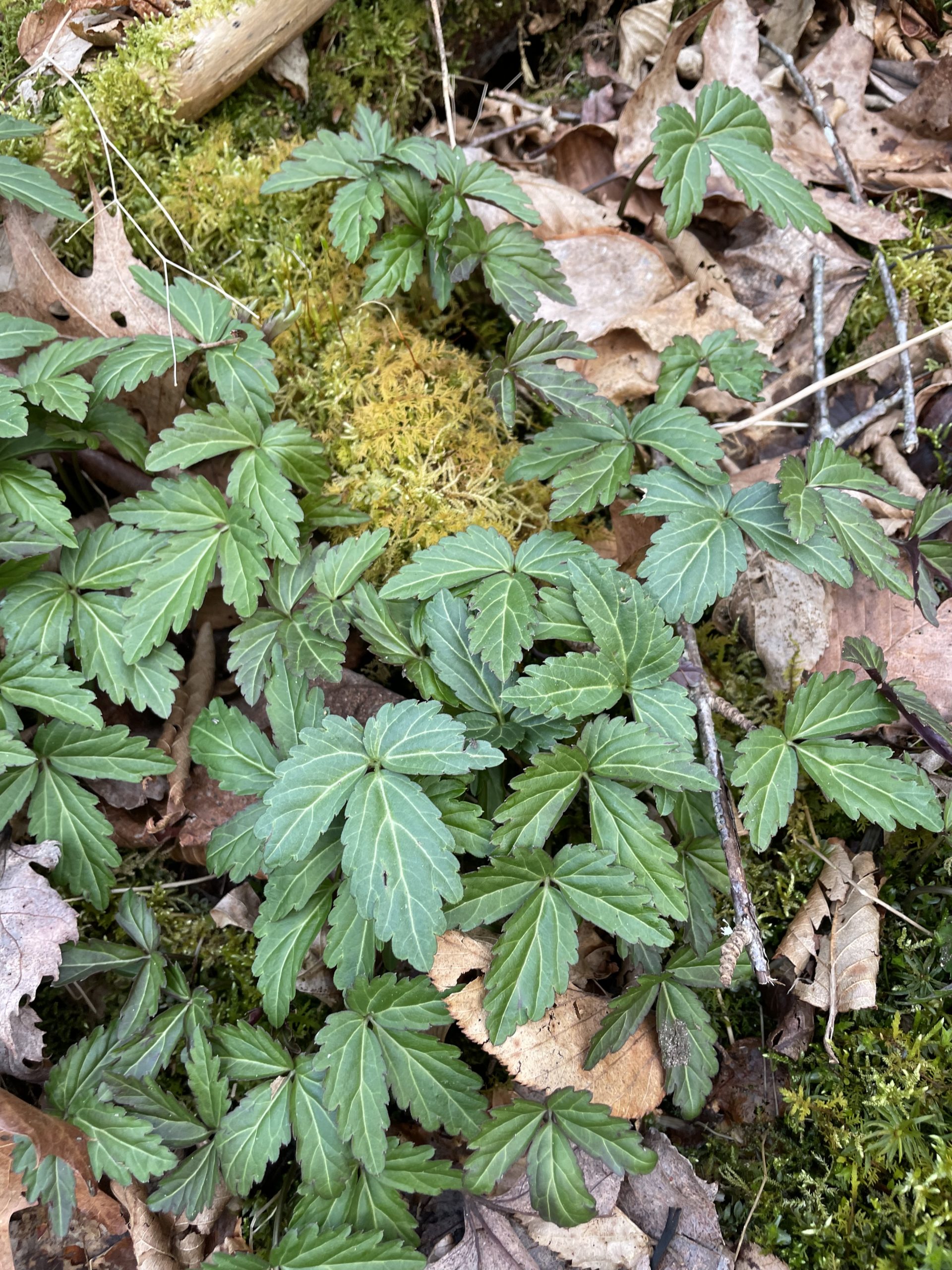 Toothwort (Cardamine sp.) — you can munch a leaf here and there, but it’s hardly a full meal.

So I’ve accepted that I’ll be stopping every few days to stuff my face in town and eat as much quick protein as I can in between. Anything that takes more than 10 minutes to cook wastes too much fuel, not to mention the time spent shivering around the stove. The best options from my initial round of “home food” so far have been:

The kishk, while it makes a good broth base, is not, alas, the one-stop meal I was hoping it would be. The flaxseed meal I’ve been putting in my oatmeal adds something to it, but I’d much rather add nuts instead. Annie’s mac and cheese is surprisingly heavy compared to other options. And among the ‘standard resupply’ options, instant mashed potatoes = 😀, Knorr sides = 😒. They taste like someone cooked them up at the lab.

Back in Hiawassee, my biggest concern was my joints. My knee felt wonky after Blood Mtn, and I kept getting pains in my feet. Though I’m still getting twinges here and there, my legs seem to be toughening up. I think I’ll be okay as long as I listen to my body and take it easy on the steep slopes.

My skin, on the other hand, seems to be the latest system to rebel against this new lifestyle. I’ve had random itches and welts for the past week, including a nasty arm rash that I think is poison ivy when I’m feeling reasonable, and something horrible and incurable when I’m feeling paranoid. Right now I think it’s starting to heal, which would make sense if it’s poison ivy. I don’t know how I would’ve got it, though, since all the plants are dormant!! It’s been keeping me up at night, and I hope it clears up soon.

I experimented with sponge baths and trail laundry my first few days, but after that I stopped being able to squeeze in the time, and it was just too cold. So, as with the food, I’m moving to a ‘wash in town’ model. I was absolutely filthy when I got to the Nantahala, and took a shower even before I ate. You lose things so easily doing laundry, though — last time was the socks, this time it was a gaiter. I guess I’ll learn to be more vigilant as time goes on!

On day one, I knew I’d have to pace myself, but thought I could more or less just keep going on and on. Now I’ve learned the rather obvious lesson that stamina has its limits, and it’s best to plan breaks at destinations along the way. This four-day push to the Nantahala was tough, but it worked for me — I worked hard to get here, and now I get to take a break.

Life along the trail can be really miserable sometimes, and it’s really easy to convince yourself that your body’s about to fall apart, or you’re going crazy, or that this journey is so staggeringly hard and long that you’ll never make it. Managing these fears, I think, will be at least half the battle of getting to Maine. For now, my solution is “taking a zero” to recover now and then. My next one will be past the Smokies, either at Standing Bear Farm or Hot Springs.

Till then, I’ll keep on walking, and climbing mountains, and sleeping in the woods among the bears. I hope to update you all again on the other side! 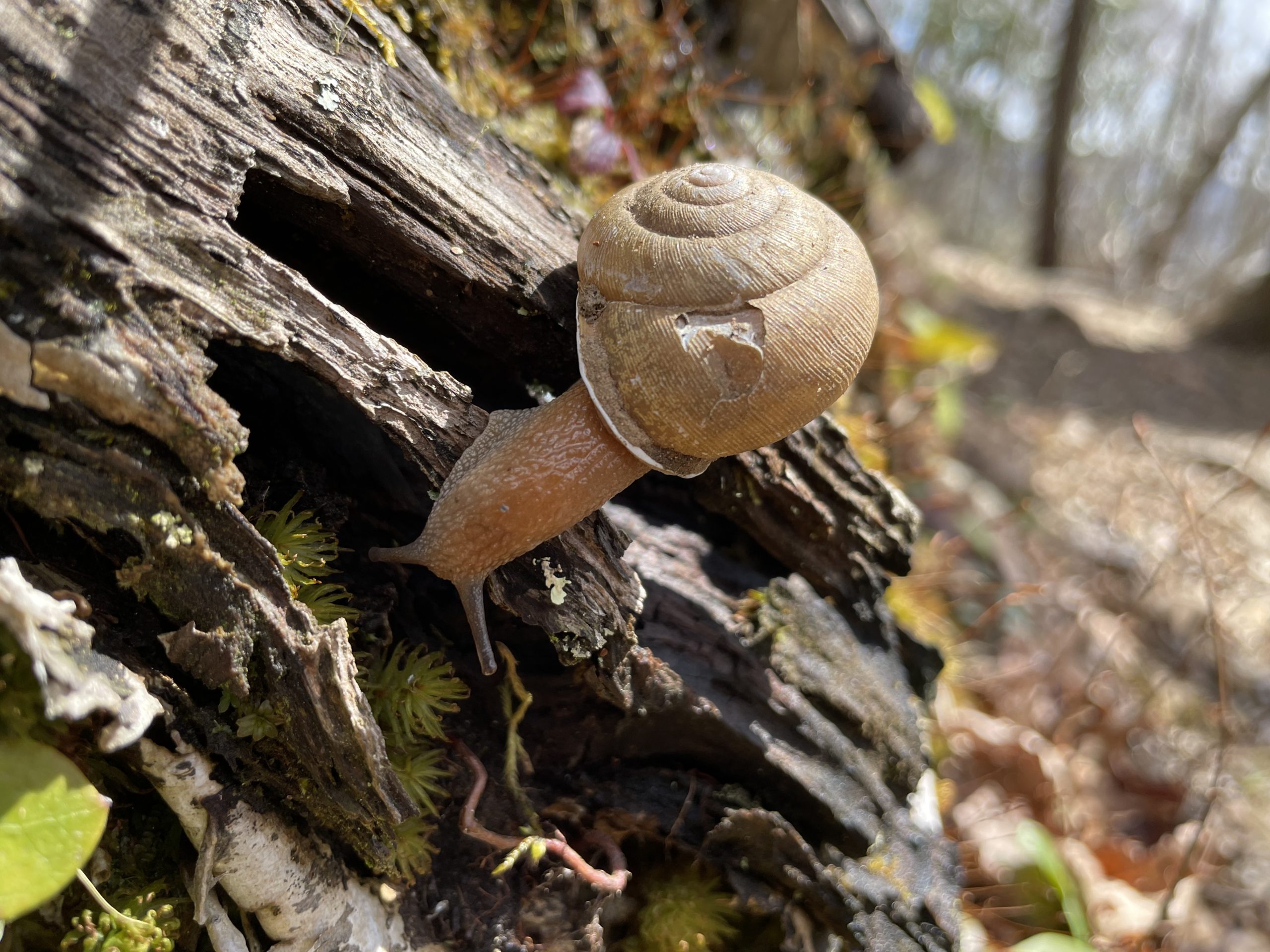 A snail ventures out after the rain on Wesser Bald.