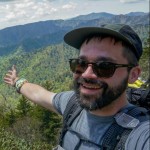 Through the Ringer of The 100 Mile Wilderness

Maine has been unbelievable. It is more beautiful and picturesque than I could have expected. From glorious rivers, to rolling landscapes of pine, and climbs straight up mountains and down into bogs, Maine is quite a challenging place to start a thru hike. The 100 Mile wilderness is a trip through the ringer.

After my first day summit Katahdin (Read about that here: https://thetrek.co/appalachian-trail/sobo-approach-trail/) I began my walk south though the 100 mile wilderness. 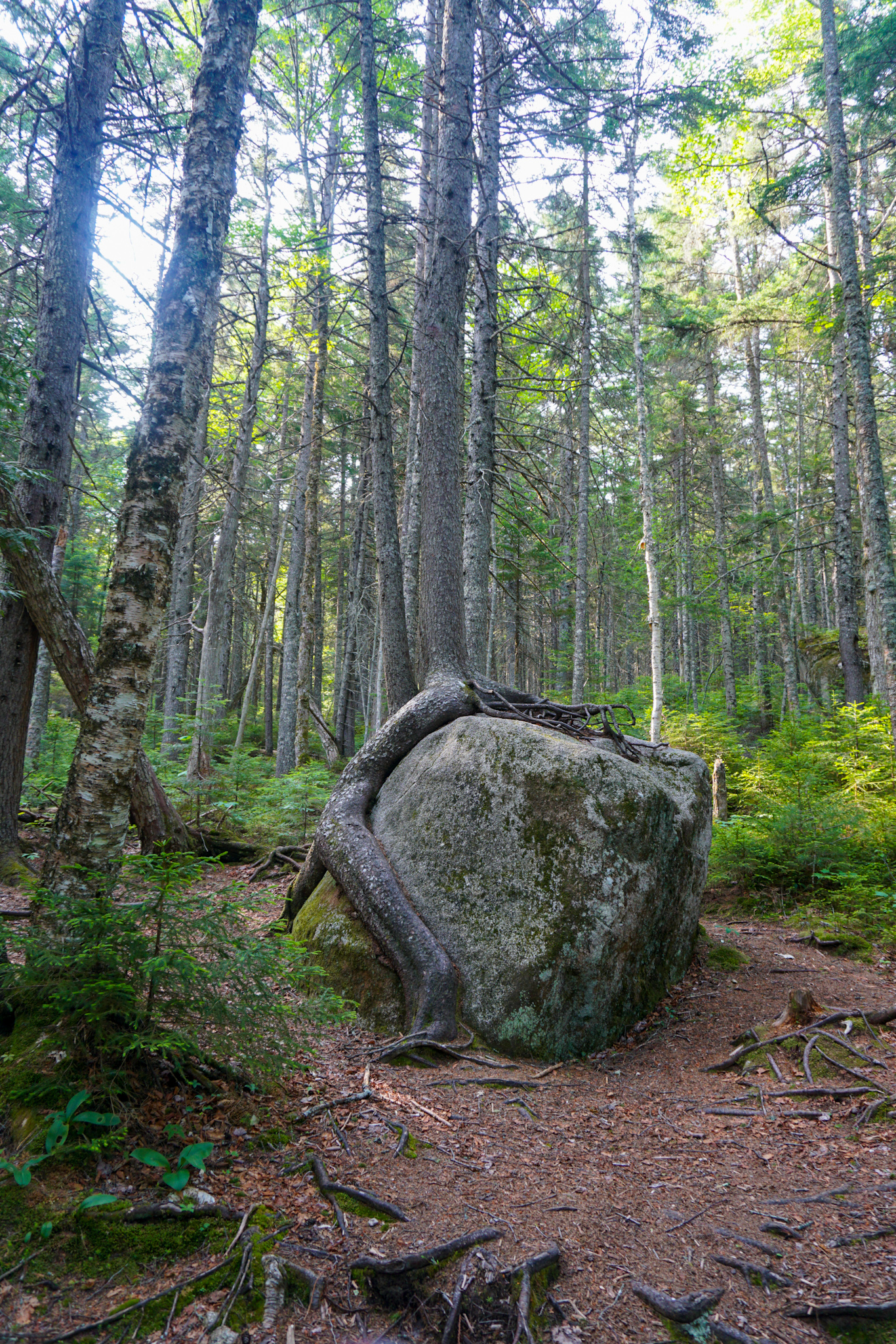 I made my first trail friend. Her name is Dropsey, a flip flopper from Alabama. We crossed path a couple times stopping to take in some falls and soon fell into sync in each others’ paces as we pushed out of Baxter towards Abol Bridge. After days of traveling solo, I found her company a welcome reprieve from the isolation I had been muddling in.

Her trail name came from her first day on the approach trail where she got lightheaded on the steps and passed out. The people who caught her and steadied her gave her the name Dropsey. After over 700 miles of hiking, she is a very strong hiker and we have a very similar pace.

Dropsey times her resupplies with Sunday church services. I really admire her commitment to a non-traditional approach to the trail. Her independence and attention to “Hike your own hike” is commendable. This also means we will possibly stick together until her ride picks her up on Saturday at a Jo-Mary road. 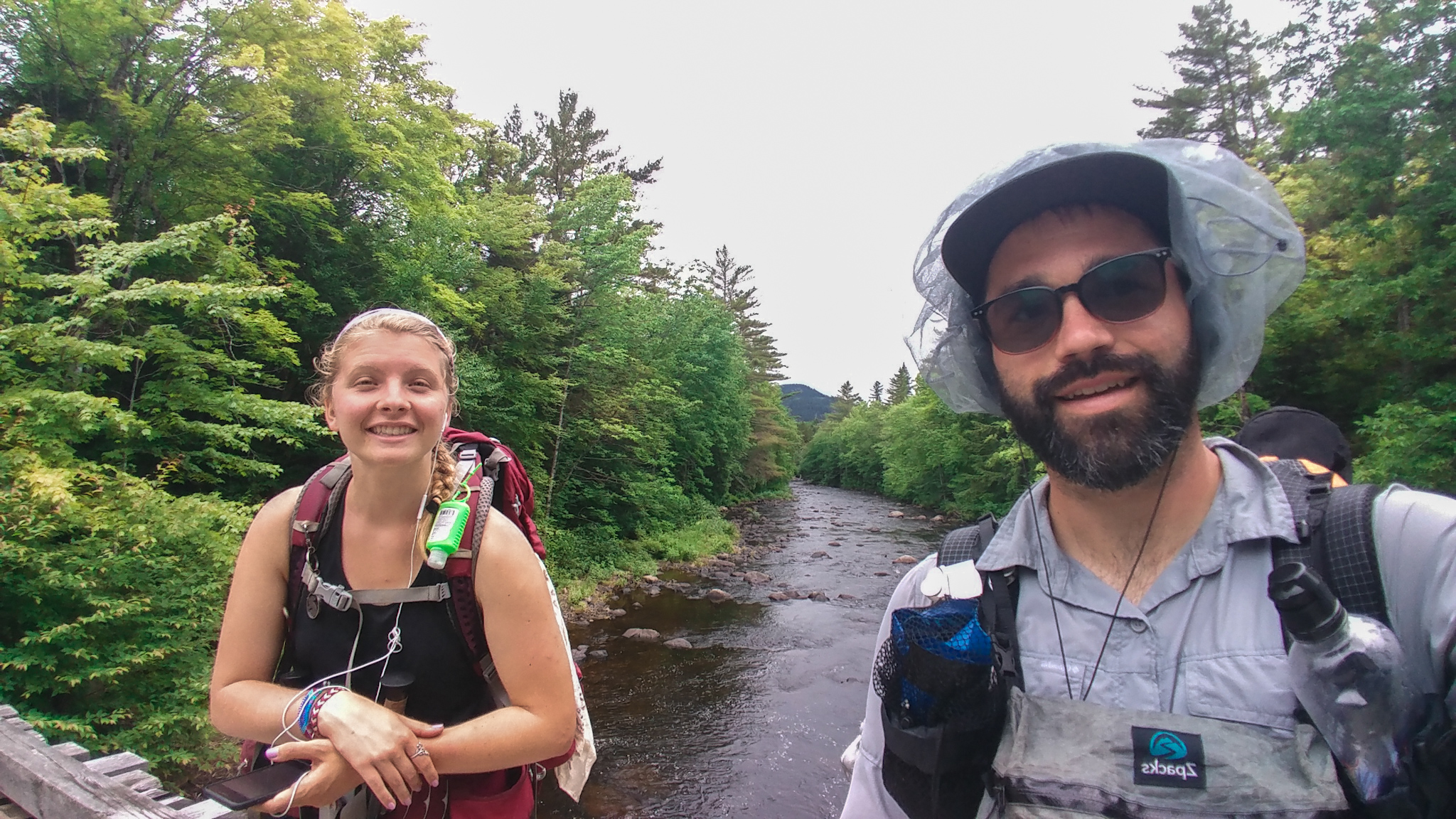 One major plus of finding Dropsey is she has some experience on trail. Particularly, she knew the art of stealth camping. We had both planned to camp at the same spot but when we got there at only 2:30 PM it was too early to call it a day and pushed forward 2 more hours to Rainbow Lake. It was worth it. Eating dinner with a fantastic view while soaking tired feet in the cold clear water was like a dream come true.

After finishing chores I played some guitar while Dropsey journaled. Since I had recently strung my guitar with new strings for the trek, the nylon had stretched out and was in dire need of a tune. One of the strings fell out of tune pretty quickly and I had to stop mid song to retune. Dropsey suggested my trail name be “retune” because I had to keep tuning the guitar.

Overnight we had some rain. It has mostly broke by morning, but as a novice I still wrestled with rain gear and overheated. I was back to regular hiking clothes pretty soon as the day cleared up to sunny skies.

We planned to eat lunch on an overlook before a pond, but I had fallen behind stopping to be diabetic for a few minutes. In my haste to try to catch her, I blew past the overlook and ended up at the pond. There were some canoes on a bank where I sat for lunch and enjoyed the view. 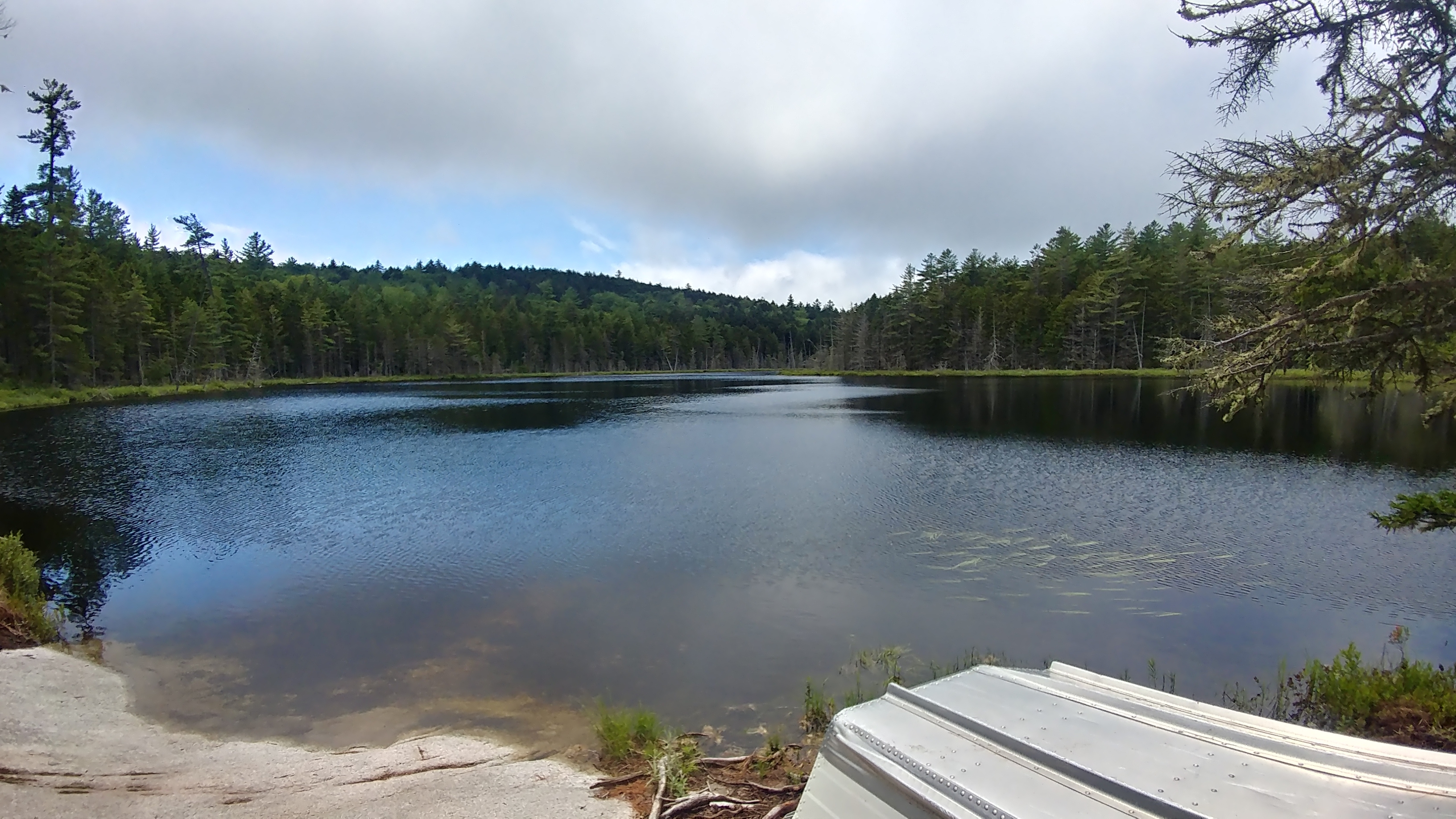 Lunch Break by a Pond

I have been put in some really big miles early in my hike due to hiking with Dropsey. At the end of the day today I realized how good it is to have a nudge for bigger miles. I realized the food drop from the AT Lodge is further than I anticipated. Luckily Maine has so far been relatively gentle in climbs since Katahdin.

The bugs at the lake to night sound like an Air strike. To try to avoid them we both ate dinner standing in the lake. It was nice to get up to my knees in water and I really want to swim tomorrow.

My first 20 + day. It felt good, and the terrain was fairly mellow with no big climbs so it allowed for a big push. I ate lunch with Dropsey at Antlers Campsite and went for a swim. While I was drying off, she pushed on and I expected to see her again at Jo-Mary road before she took off for her resupply. Unfortunately the family picking her up was there an hour early and she was nowhere to be found when I got to Jo-Mary road. 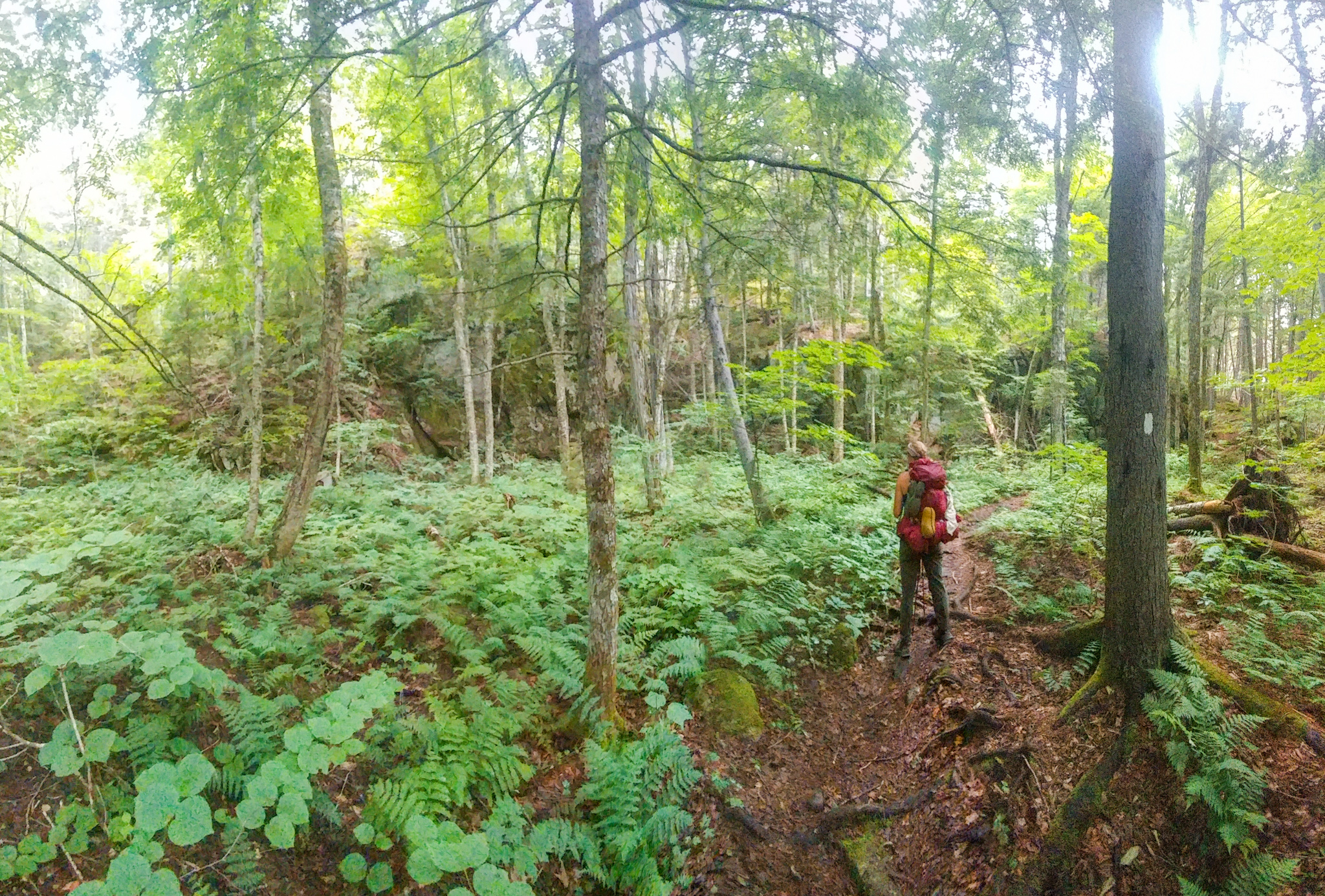 Dropsey in the Forest

Graced again with independence I moved forward towards the Cooper Brook Falls Lean-to. When I got to the shelter I ran into someone from AT Lodge who had met up with a group who was partaking in some party favors from whitehouse landing (A Hostel/Fisherman Resupply in the 100 Mile wilderness). Due to my dwindling rations of food, I decided to push on a couple miles to Crawford pond about a mile from the resupply.

Dinner at the pond was spectacular. Hanging my hammock just off the trail I had a view of the mountains and a perfect sunset. I watched people canoeing towards the setting sun, silhouette against the mountain as the lake lit up with a golden glow. 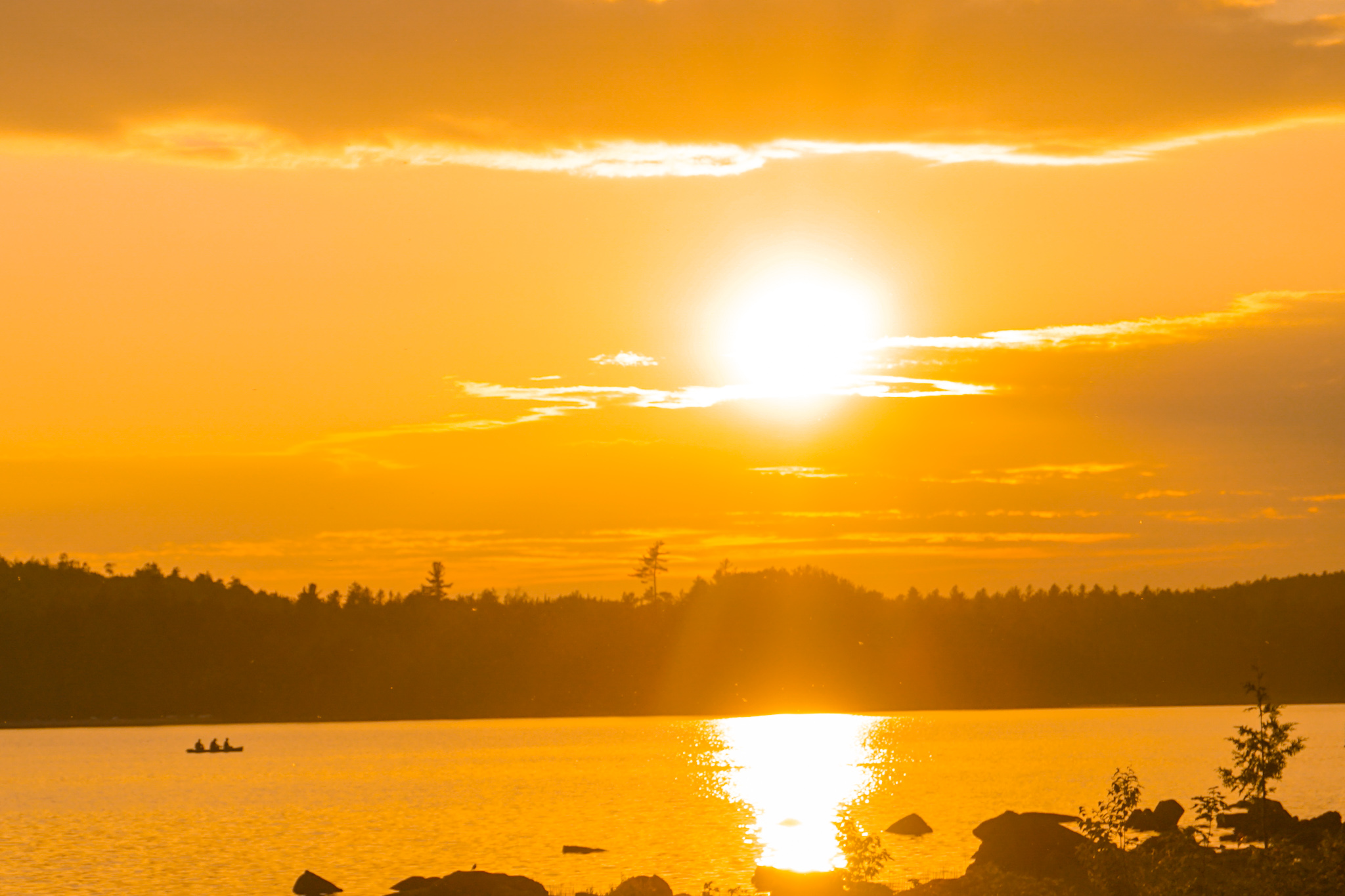 My food drop wasn’t there this morning! In a panic, I ran up the road to find service but there was none to be found. Finally around 9:30 easy rock showed up and thankfully had my food. I finally got moving again just after 10:30. I’m not sure if it was the extra pack weight, but it seemed like the terrain was tougher today than past. My legs were also tired from the long day before.

After getting to Logan Brook Lean-to around 4 I decided to push over white cap with hopes to get to Sidney Tappan Campsite. White cap was clear when I got there and had the final stunning views of Katahdin I would see. I never made it to Sidney Tappan and ended 3 miles short of planned camp at the White Brook Trail Junction. I camped here with section him Zulu-Beard and NOBO thru-hiker Fireball. I didn’t realize how much I was craving company, but it was nice to have their company while eating dinner. 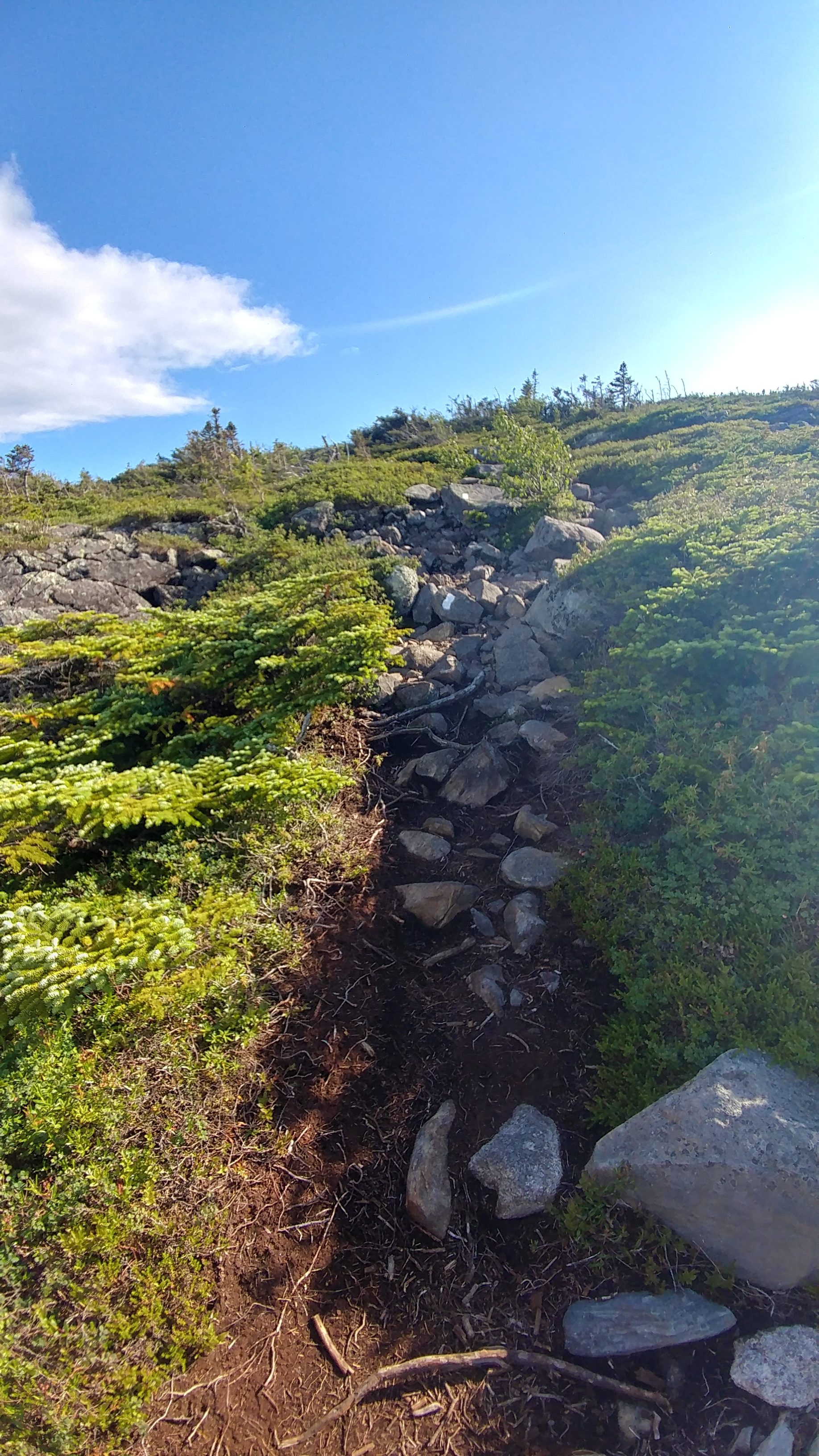 When I was on White Cap, I was able to get some cell service and was blown away by some of the support that has been sent my way from complete strangers in the diabetes community. There is so much love there and I went to sleep with my heart incredibly full. 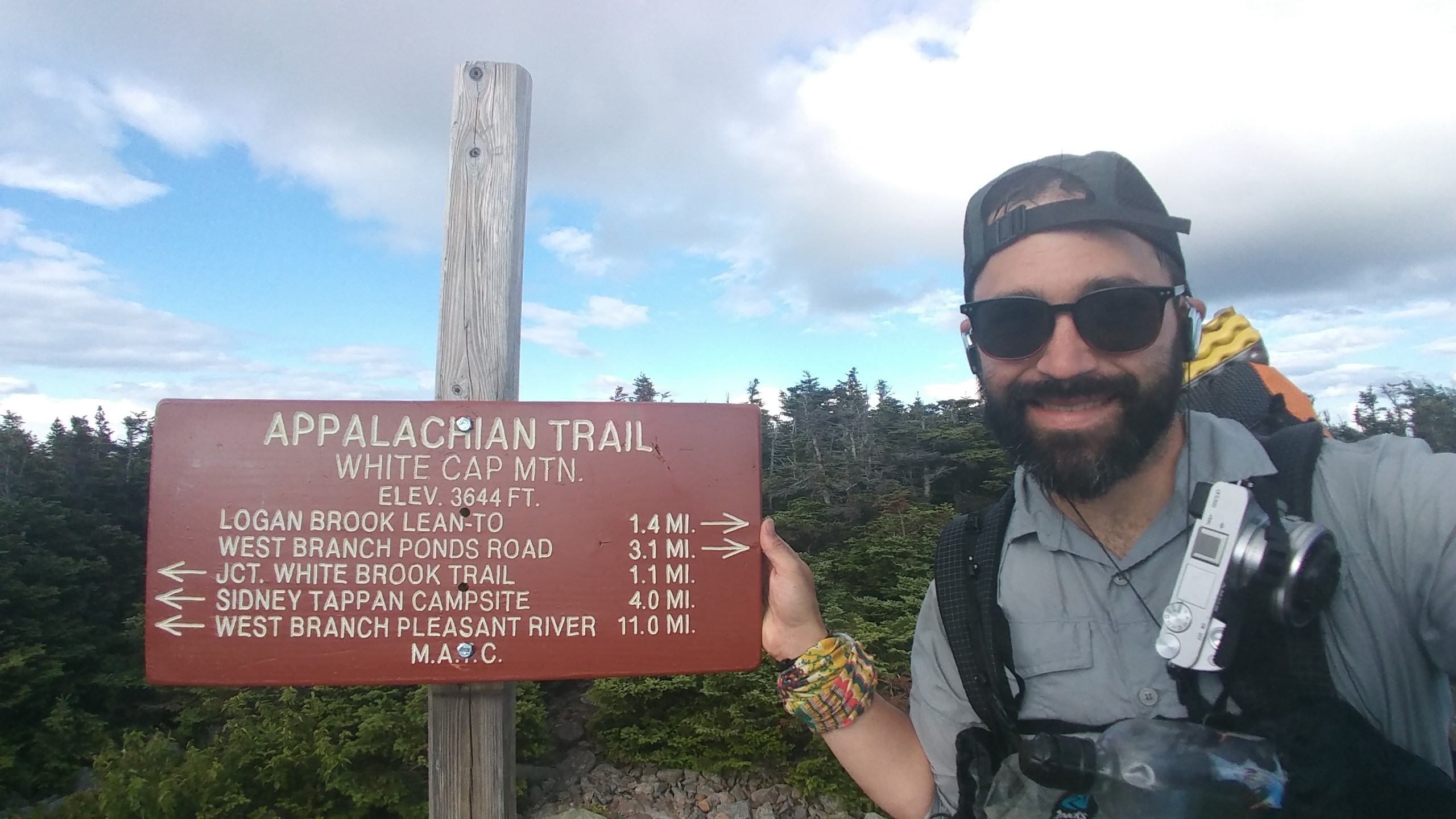 While packing up camp, I was passed by Giggles and soon after MOM (mind over matter). I hiked with Mom for a bit before he stopped to make a phone call. I met him again at a shelter where Giggles was about to nap. They had woke up at 3 for sunrise on white cap.

At the shelter I chatted for a bit before returning to trail as I wanted to have at Screw Augur Falls. I saved water the night before so I had a hot lunch at the falls and then went for a swim. I hadn’t seen anyone all day so I decided to skinny dip. Of course as I was getting out I looked up and saw a family coming down. Oops. 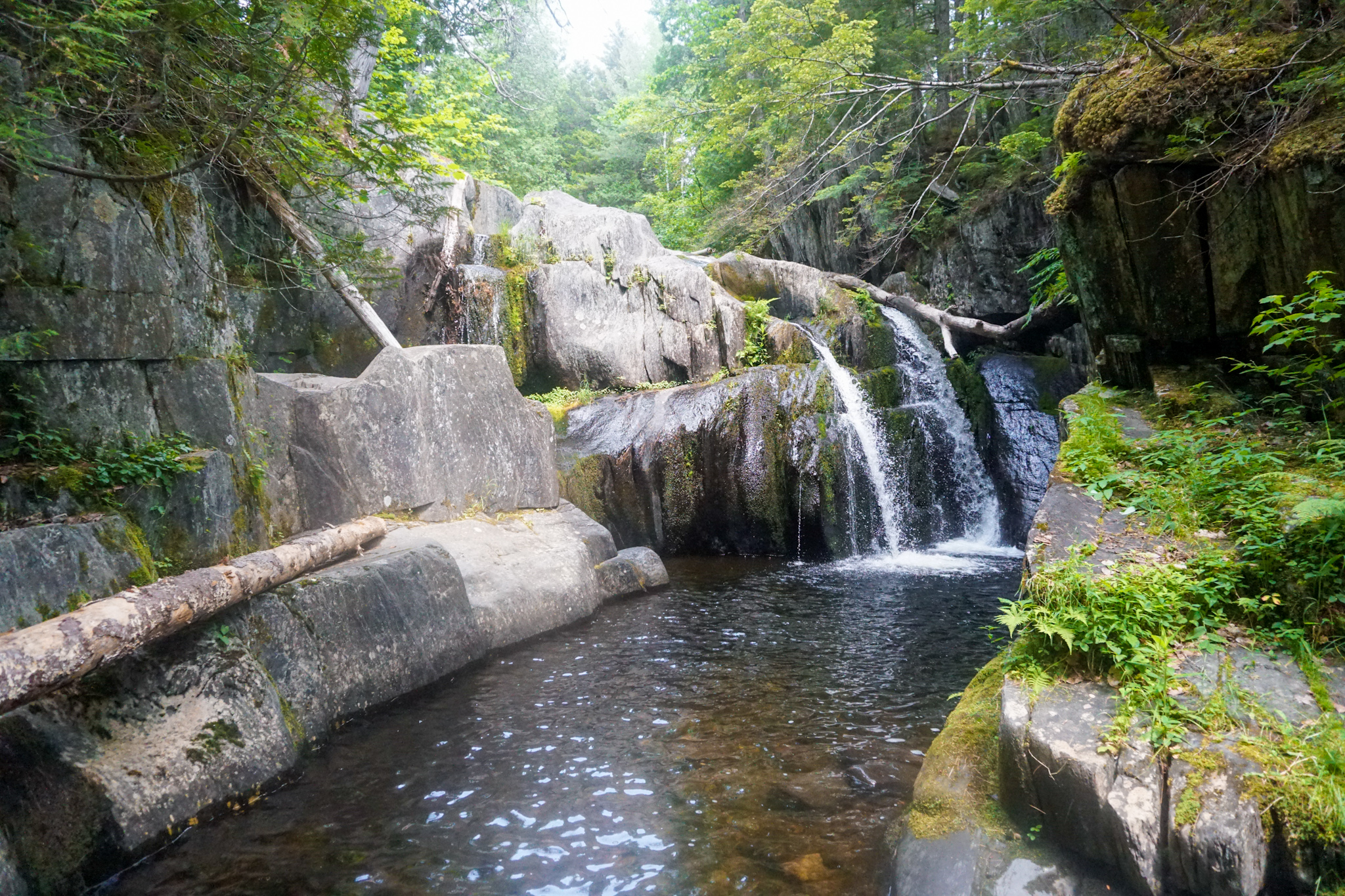 This swim was one of the most rewarding parts of the day as the day progressed to be very challenging as I entered the Chairbacks. After fording a river I started the climb. During the climb, water became an issue. Most of the sources were muddy and when I finally made it to the shelter, it was barely a trickle. I was too dehydrated to push on, and was starting to have trouble with my saywer micro but took my time and drank a lot of water. The heat and the bigger climbs on the second half of the hundred mile wilderness was really starting to slow me down.

The Chairbacks were super challenging. About 1.7 miles into the day I came to a great water source and ran into a group of soldiers. The group was called Wilderness for Warriors. I had met one of them when I was in the grocery store getting dinner in Bangor and he recognized me and we chatted for a bit before I pushed on over the rest of the Chairbacks.

It was another hot and isolated day. I planned to get to Vaughn stream but as I hit the 100 mile mark, the water was too perfect to not stop and camp and swim. After swimming and finishing dinner, I was sitting on a log playing the guitar facing the trail. 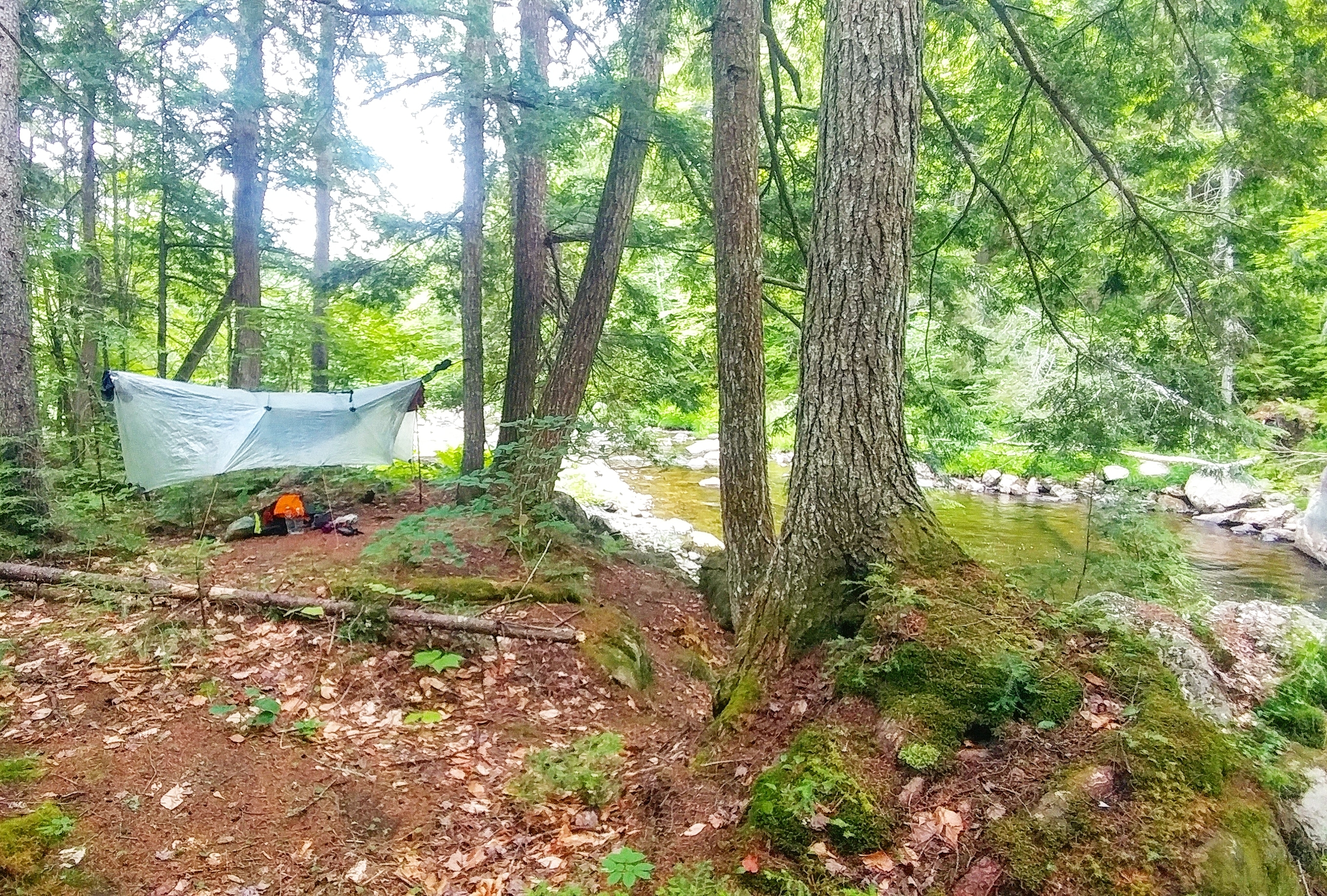 At this point I had accepted my previously given trail name of Retune. I liked how it had a double meaning with the guitar, as well as with using the trail and nature to Retune my soul.

I hadn’t really seen many people once I got to camp and was pleasantly surprised as Dropsey walked by. She stopped and camped with me for the night. It was nice to catch up with her and have some company for the final push out of the wilderness! 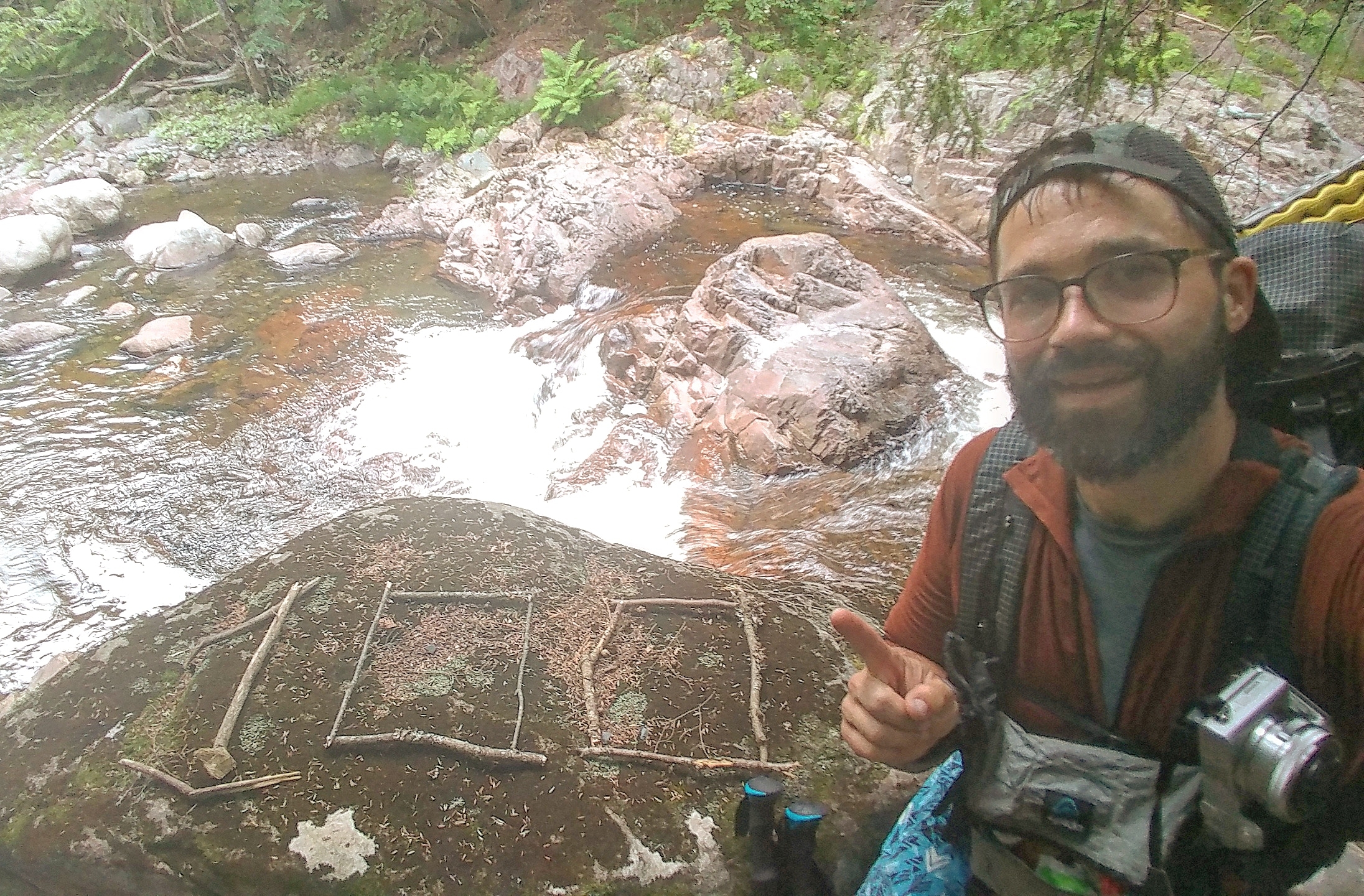 Today was my first day of consistent rain. Once it started it was non-stop all day. The final 15 miles of the wilderness had a lot of tiresome up and downs. Climbs with no rewards and slippery wet rocks to descend. I learned that if it doesn’t look hard, don’t expect it to be easy.

Having Dropsey there made the inclement weather much more tolerable. I was beginning to lose my mind by the end and we were laughing at the absurdity of the never ending wilderness area. We stopped for lunch overlooking the top of waterfall as it cascaded from a cliff. 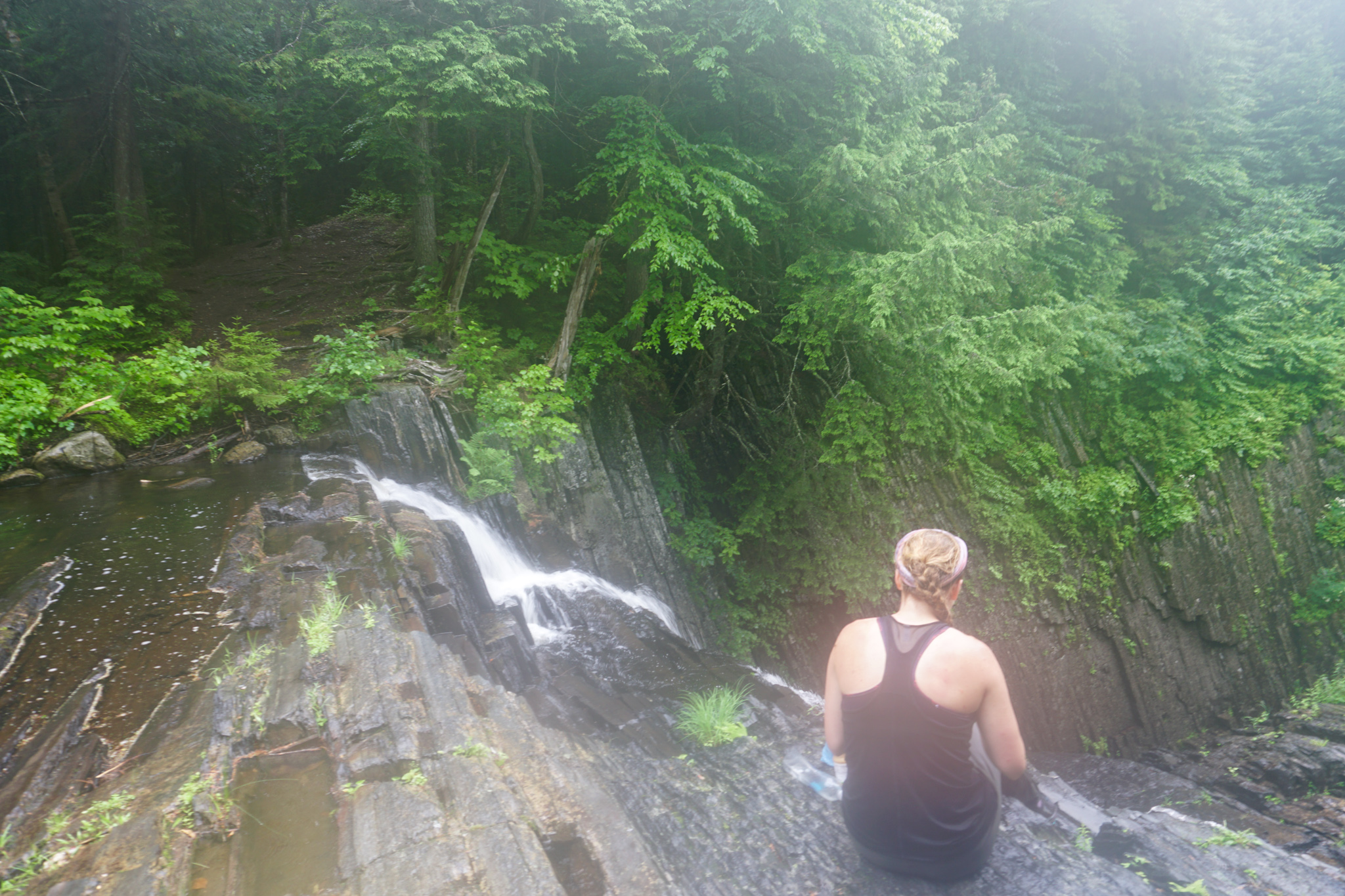 The rain mostly cleared up by the time we got out of the wilderness area. Dropsey decided to push on to Caratunk while I planned to zero in Monson and pick up a resupply box. Shaw’s picked me an 3 other NOBO’s up just as Dropsey disappeared back into the woods. This upcoming zero was well deserved and I looked forward to some rest.

My name is Mike Joyce. I am taking on a SOBO thru-hike of the Appalachian Trail starting July 2019. Residing in Florida, I'm no stranger to mountains as I've lived all over the US. Over the last 2 years I took on obesity and turned from couch potato to trail runner. By following a ketogenic diet, I've lost enough weight that a fully loaded pack feels surprisingly light. As a bonus, this diet has helped with managing Insulin Dependent Type 1 Diabetes. I intend to maintain the diet during my thru-hike. Join me on my adventure where I hope to share my experience building my meal plan, resupplying medication and food predominately by mail drops, and shining a light on the SOBO AT experience.