Aside from a boat tour around the Statue of Liberty, never had I ever crossed into New Jersey. I’d seen commercials for Jersey Shore (the TV show I’ll boast in saying I never actually watched) and that’s all I’d ever seemed to have heard of the state, so when I found out the trail went through – I was shocked! The feel was much more remote than it’s been as of lately, and the only surroundings featured farm houses and large pastures. Safe to say I was happily surprised. 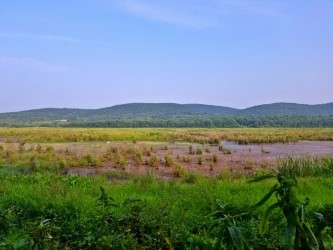 The heat wave didn’t end when we crossed over from New York. It did start with a descent that led to a country store where I chugged a cold tea and got some reprieve for the duration of time I spent inside the store. They had a faucet outside where I poured water over my head and made my way back to the trail after too long, postponing the inevitable. The rest of the day entailed open fields, buggy marshes, and extremely long boardwalks. Not sure why I said buggy marshes, though, because it was quite frankly an overall buggy state. Think about the buggiest experience you’ve had and multiply it by an unbearable amount. It’s a relief it didn’t rain at all because my rain fly would have suffocated me in the heat we had, yet it was too bug infested to cowboy camp (camping in the open without a tent). I mentioned the bugs in New York, and sure they were bad, but holy cow, this state actually made me google ways to rid the world of mosquitoes.

You can’t see the mosquitoes, but they’re there.

I saw my first wild bear on trail! As I rounded the corner I thought it was a large dog, like a bear-dog I sometimes think are cute to pet, but when I realized it wasn’t in fact a dog I changed direction so fast you’d think my feet didn’t hurt at all (which they did). I walked five minutes back in the direction I’d come from until I ran into Dreamer and had him lead the way. We didn’t see it again so he probably thought I was delusional or the heat had finally turned my brain to mush. 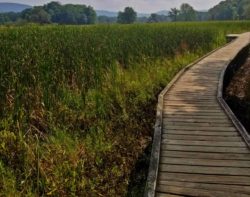 Sun Chaser was elsewhere at this time, having stopped at a hostel, so Dreamer and I did 22 miles into Unionville. The town was about a mile across the border, so it was actually in New York.  It was a great town that made hikers feel extremely welcome as their layout was ideal. We were directed to a park and assured our belongings would be safe if we wanted to pitch our tents there for free, with close access to a toilet and a gazebo to sit in. To top it off, the town itself had everything hikers are generally looking for: a bar, a pizza joint, and a general store. I’ve been absolutely loving these small towns and their charm. 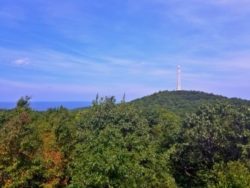 The town loving didn’t stop there. Intending on an early-morning start, we made it to the general store to buy a cup of coffee and ended up sitting on their porch for three hours using the outlets to charge electronics and stuff our faces with free, day-old doughnuts. That meant we walked for the hottest part of the day in temperatures over 90 Fahrenheit. Thankfully, there was a lake to swim in so that felt nice and refreshing. I really do enjoy walking in the heat over walking in rain or cold, so my complaints were minimal. We took it easy and did only 19 miles that day, ending at a pavilion on top of Sunrise Mountain. It was refreshing to have a breeze keep away mosquitoes long enough to cook dinner and set up camp. I was well aware the pavilion had a rock ground yet I set up my tent on it anyway, which means I wasn’t surprised when I had an uncomfortable sleep. It made waking up early easier at least. The sun did indeed rise on Sunrise Mountain, but the sunset from the night before was no match for the sunrise. It set under a red sky, behind the thick humidity that showed a unique kind of beauty. 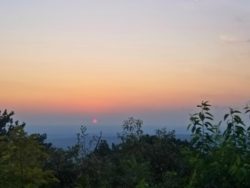 Sunrise Mountain, though this is actually the sunset because it photographed better.

Aug. 29: “Sweaty 24 miles. Swam in Crater lake. The end.” That was all I jotted down in memory of that day. Some days are just completely uneventful, when nothing happens on the trail, and not much happens in the mind. Your feet just magically place themselves one after another and you finish farther on down the trail than you began. I do remember my feet knowing I was due to stop walking for the day, so I ended in a spot that looked like it could be a campsite. Without waiting for the bugs to pull up and feast, I set up my tent and relaxed. Dreamer sauntered on past and told me I wasn’t actually to the campsite yet, and since it was only 7 p.m. he continued on. See, he has the App called Guthook’s, which is a paid app that’s full of useful information regarding the trail. Most people have it as it’s apparently worth it. There’s also a widely used book called AWOL that I also do not have. I started out on the trail following the white blazes and hoping for the best. Back in Vermont I met a NOBO who had just recycled the pages from the direction he had come from and I was going, so he kindly asked if I wanted them and retrieved the pages for me. This book shows water sources, campgrounds, shelters, and mileage, and other cool information. It’s a wonder I’ve made it this far. 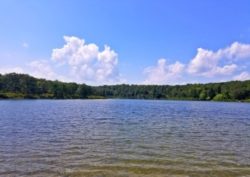 Sitting up in my tent to blue skies and a rising sun had me realizing I wouldn’t want to spend my 25th birthday any other way. Just like that – another year older. I ran into Dreamer on the nine-mile stretch we had left into Pennsylvania – so I even got to cross a border on my birthday! It was one of the fancier crossings, too, with a nice painting on the sidewalk of a bridge. The traffic was pretty heavy and I pretended each car that honked just knew it was my day. Cheeto even sent me a message – about 50 miles behind – and told me she’d been carrying a miniature “Happy Birthday” balloon on a lollipop stick. It just goes to show the kind of people you can find out here, carrying extra weight for such a reason. 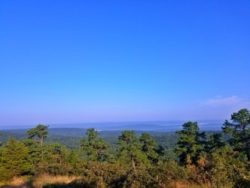 Now I only spent the morning part of my birthday in New Jersey, so the best part is yet to come. May as well remind everyone of my birthday in my next post too because I do enjoy a good birthday and this was one of them. So I’ll see you all over in Pennsylvania. As for New Jersey – you were thoroughly enjoyable! 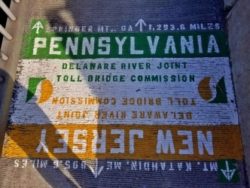