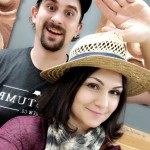 “Oh, you’re hiking with your boyfriend.”

It’s the phrase that makes me want to cringe. Or, maybe it’s not the phrase. Maybe it’s the tone. It’s that subtle insinuation, that quiet prod that screams you’re incompetent on your own from the rooftops.

Oh, you’re hiking because he likes to hike.

Oh, it’s so great that you’re following him as he achieves his dreams.

Oh, of course you are, because you would never do it alone.

It may be hard to picture me with a murderously large, twitching smile on my face since we aren’t friends yet and you haven’t seen my ugly mug (A++ attractiveness in the featured photo for this post, actually), but that’s what my soul feels like when I sense that kind of judgment.

I’ve been working with my therapist on that. Seriously, therapy is fabulous for me and my constant, pervasive battle with general anxiety. And since I’ve been working hard fixing my brain, I know that that feeling I have when people make that kind of judgment comes from my… ahem… “desire to be seen as competent and independent.” And it’s true! A lot of my ambition comes from that desire, and so when people cast off my own motivations and goals as unimportant or insignificant, well, it doesn’t feel good.

But let me tell you, I’ve picked up a lot of interests and hobbies from friends and lovers over the last decade and a half.

When I was a blushing senior in high school, my soon-to-be boyfriend introduced me to Rush. They became my favorite band (said in a Dumb and Dumber voice) and still are 12 years later.

I picked up my love of hockey (go Devils!) from another significant other. I picked up a fondness for Dungeons & Dragons from someone else, and my love of motorcycles from yet another. Some girlfriends, some boyfriends. Isn’t that how everything works? For you to enjoy a thing, you have to find out the thing exists first, right? Someone has to introduce it to you.

It just seems like the passing of an interest from male to female, especially if there is romantic entanglement, somehow gets seen as the princess with her arm around the prince as he helps lead the country—as his interest that she just hApPENs to partake in for his sake.

I feel like if I were at one with myself and more Buddha-like, I could just accept that. Stephanie, I say awkwardly to myself, the only person who needs to know the truth is yourself, and it doesn’t matter what anybody else thinks, because you have your own reasons for making your own decisions like any rational human being. Let them think what they must.

But it still makes me want to flip a table.

The Appalachian Trail runs right through my hometown of Vernon, NJ, and I’ve hiked sections of it my whole life.

As a matter of fact, I’ve been camping and hiking my entire life, but I didn’t know thru-hiking was even a thing that people did until I met my then-friend, now-boyfriend, Richard. He thru-hiked the PCT in 2016 (Captain says hello!) and told me about his plans to Triple Crown. At first, I laughed. Then, I realized he was serious. Then, I was horrified. You know the sequence. It’s a lot of emotions. I thought it was crazy, but as I nosed around in forums and read books and watched videos about what it actually meant to thru-hike a trail, I was hooked. I waited patiently for all the factors and considerations to organize themselves in my head until one day I woke up and decided I was going to do it. I had to do it. There was some kind of call from inside me somewhere. I knew I was going to join him and hike the Appalachian Trail.

I’ve read about other female thru-hikers or section hikers encountering the same kinds of judgment, and I’m here to tell you that you aren’t alone in feeling that way and getting frustrated for being overlooked.

The way I’m writing about it may seem like I intend to state that this kind of thing happens all the time, but I have to make it a point to say this does not happen all the time. In fact, the majority of people I’ve met are unbelievably supportive and levelheaded, and they understand what it takes to make a sound decision about something that includes taking five to six months of your life to hike in the woods. They see me as an individual who is lucky enough to achieve a new goal with her best friend. It’s just those few condescending comments that somehow end up feeling louder than all the positivity that can sometimes get to me. I could get into my years of experience as a female in male-dominated industries, but that’s a topic for a whole ‘nother post. (Oh, noes, Stephanie, noe. Too soapbox-y.)

It doesn’t matter if you’re hiking with a newly met acquaintance, your best friend, or your significant other. If you’ve made the decision to hike the trail, if you’ve got your eyes set on the experience you want on trail, no matter your gender, I’m right by your side ready to cheer you on as you kick dirt all the way to Katahdin (or Springer, I don’t judge, but I do, NOBO 2019 iz where it’s AT, #FAM. LIKE n SUBSCRI—jk).

I see you, hiking your own hike, and I think it’s pretty damn cool that you get to do it with your best friend.

And so that’s what I’m going to do. I’m going to thru-hike the Appalachian Trail with my boyfriend—in the same tent, in the same sleeping bag. There may be some giddy arm-linkage and even a flower lei, but there won’t be any crowns to don or titles to bear. It’ll just be us, gunning for Katahdin for reasons that may be uniquely our own but are merged by our love and desire to be wet, cold, dirty, broken, tired, and hungry in the middle of the woods.

So why am I thru-hiking the Appalachian Trail? I didn’t tell you, did I?

In my next post, I’ll get into a bit of detail about why I made the decision to hike the AT despite being just months removed from having ACL reconstruction surgery.

Hey, there. Did you know that there is no pressure like the pressure you feel when trying to write a concise paragraph about yourself? I'm an explorer-human who gets bored easily? A TanTanMen-loving Supernatural fan? A car-free, curly-haired, biochemist? I was very much enjoying my career as a brewer until I tore my ACL in August of 2018. (My orthopedic surgeon gently used the word "shredded." Don't worry--still won the flag-football game.) I underwent reconstructive surgery in late October, and am looking forward to showing all explorer-humans that it's possible to do "BIG THINGS" and accomplish great physical feats even if you have knee problems. I'll be hiking the Appalachian Trail starting May 1st of 2019. I'm also looking forward to connecting with other people who seek adventure and aren't afraid to spend some time wandering and wondering with their head in the clouds.