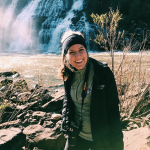 #2 The Rest of Maine

“You plant a garden one flower at a time. You write a book one word at a time, clean a closet one shelf at a time, run a marathon one step at a time. If you feel defeated by some large task, get your spade and dig the first hole.” ~ Jeanne Marie Laskas

So I took the step in front of me.

I landed in a company that I’d never heard of before, but for a year I got to work with some of the most amazing people and learn how to do well in a corporate environment.

Since then, I’ve come to realize that as overwhelming as it is to have absolutely no idea what the future holds, there is no other way to live life than one step at a time. After a year in the corporate world, I decided my next step was to hike the AT. Now, as I hike, I practice the same principle and here’s what I’ve found: when I take one step at a time I can climb mountains. 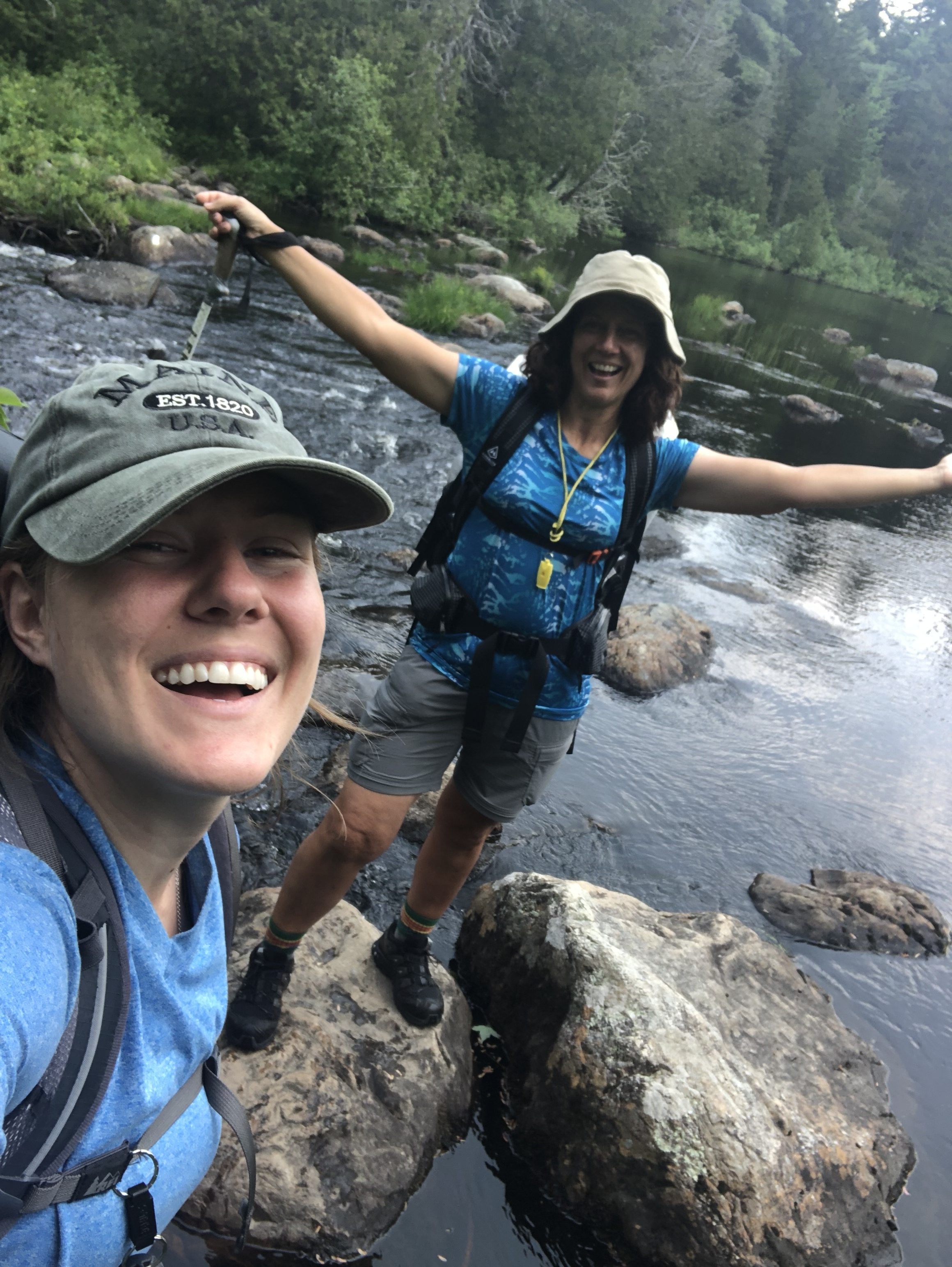 After summiting Katahdin, my dad drove my mom and me back to Monson and my mom became my second section-hiking companion.

In a matter of weeks she did basically as much research on backpacking as I’d done in six months, and in as much time she had also compiled all of her gear. Despite the fact that she personally had no interest or conviction to live in the woods for any period of time, she was so excited to spend two days with me on the trail just because I had an interest and conviction to go backpacking. If that is not love, I don’t know what is.

Mom, I love you too.

We got dropped off on the road that Uncle Terry and I had accidentally hiked to on day one, which was a blessing. As beautiful as that five-mile stretch of trail was, I definitely was not looking forward to hiking it for a third time.

We forded a couple rivers, spooked a couple snakes, and hiked nearly 12 miles to a shelter right on the edge of a lake. There were more tents at this shelter than I’d seen in my entire hike so far, which I took as a reminder that I was no longer in the 100-Mile Wilderness. We set up our tents and because of the bugs, immediately dove into them. 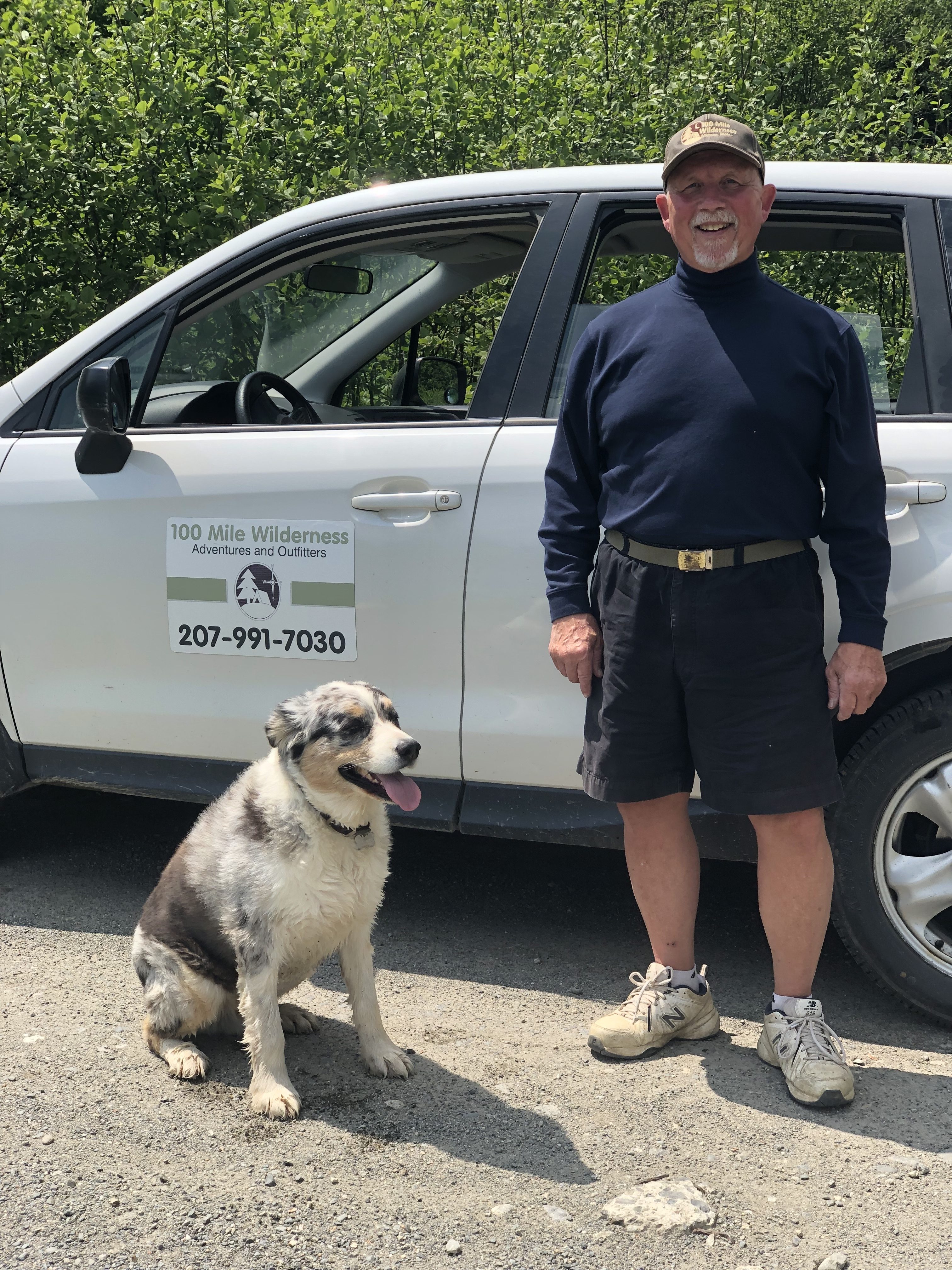 I’d gone to sleep thinking it would probably be incredibly beautiful to watch the sun rise over the lake in the morning and planned on getting up for it. Then 7 a.m. rolled around and I had no choice but to get up because the sun was so high at that point that I couldn’t sleep. We had amazing weather and even better views climbing over Moxie Bald Mountain and we got to mom’s extraction site with an hour to spare. The road where she was getting picked up was by another lake so I jumped in to cool off and we hung out by the water eating lunch until Phil pulled up.

Side note about Phil: he runs an outfitter in Monson, has hiked the AT three times, and has quickly become one of my greatest inspirations. 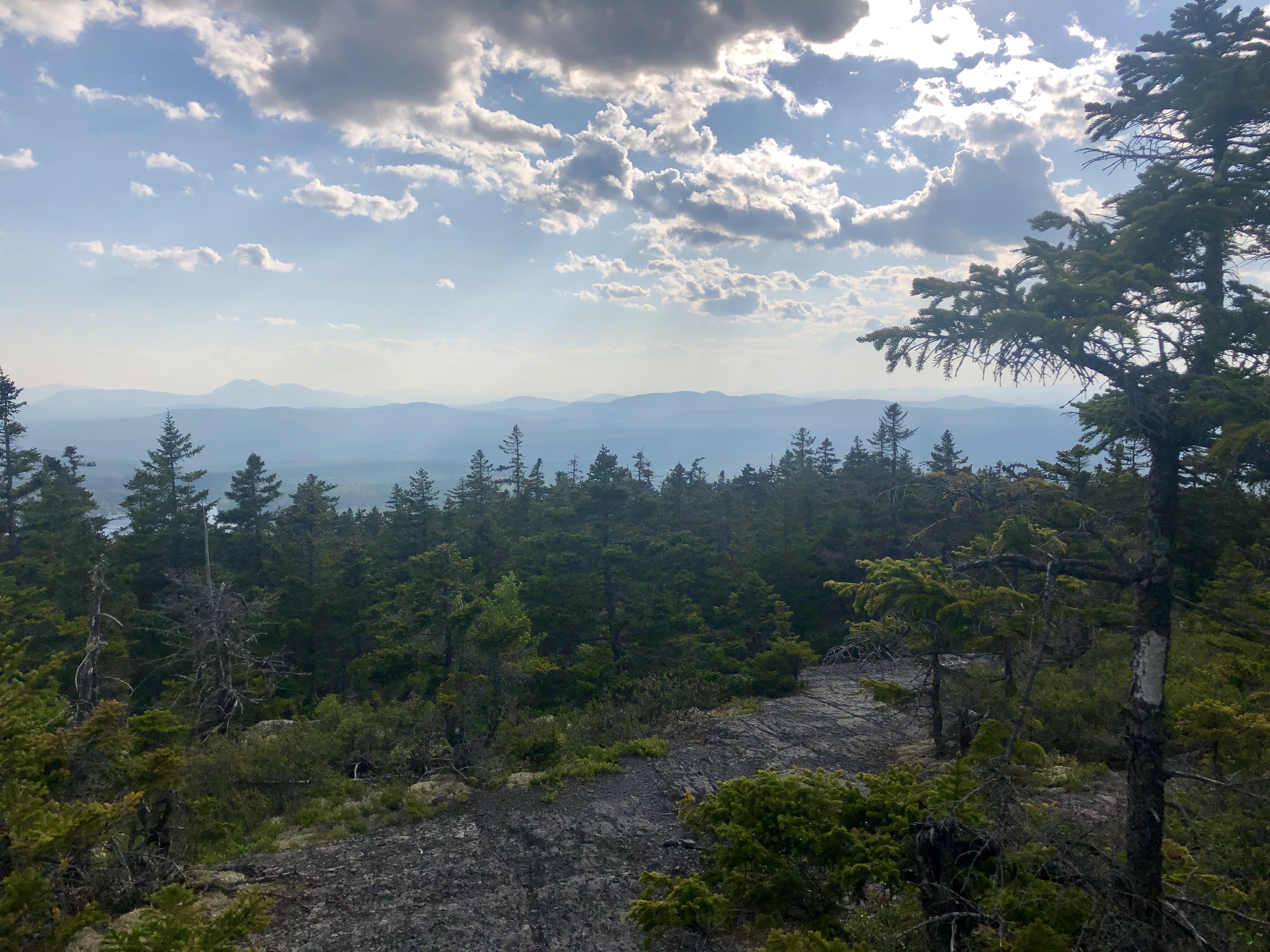 I learned the hard way to pay extra special attention to post office hours on this day. I’d bounced a package of supplies ahead of me to the P.O. in Caratunk, Maine, not realizing this particular town has a population of 66. The hours for the P.O. here are 2-4 p.m. M-F and just past town the Kennebec River ferry that I would have to take only runs from 9-11 a.m.

Fortunately, one of the nicest hostels on trail is located in Caratunk, so I really wasn’t that disappointed to be forced to hike only six miles into town and then hang out with Wi-fi, on a couch, eating pulled pork sandwiches and milkshakes for the rest of the day, and then the most amazing home-cooked breakfast in the morning before heading out to catch the ferry. 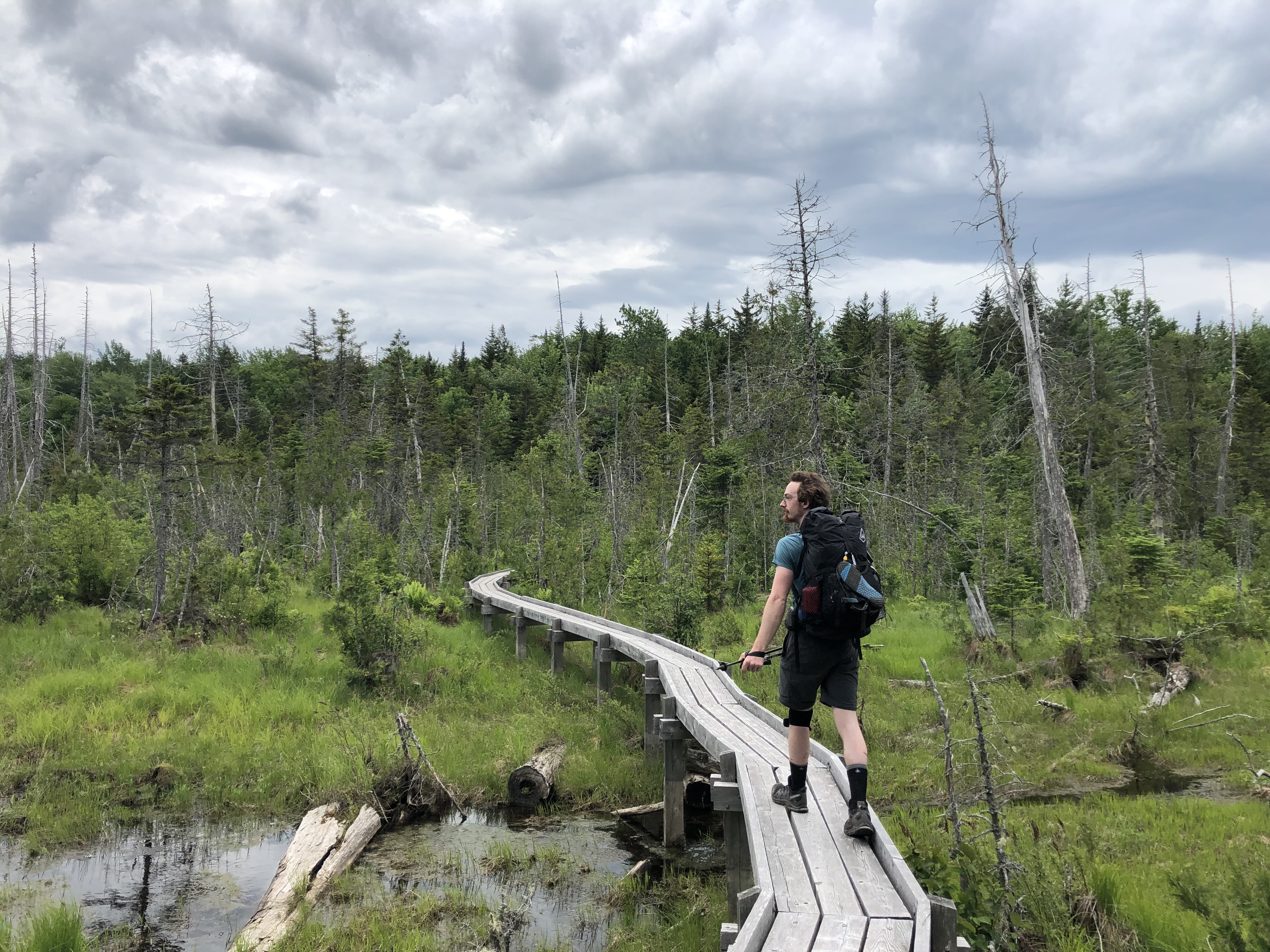 After the amazing breakfast at Caratunk House my morning only continued to get better: I caught up with my friend Over It at the Kennebec River. We were the first two to cross for the day.

I discovered around noon that I couldn’t stomach the shake that I’d packed for lunch. Since I was planning on enjoying this shake I’d packed three of them—one for lunch every day for the next three days. Suddenly I had extra weight and fewer calories. Boo. 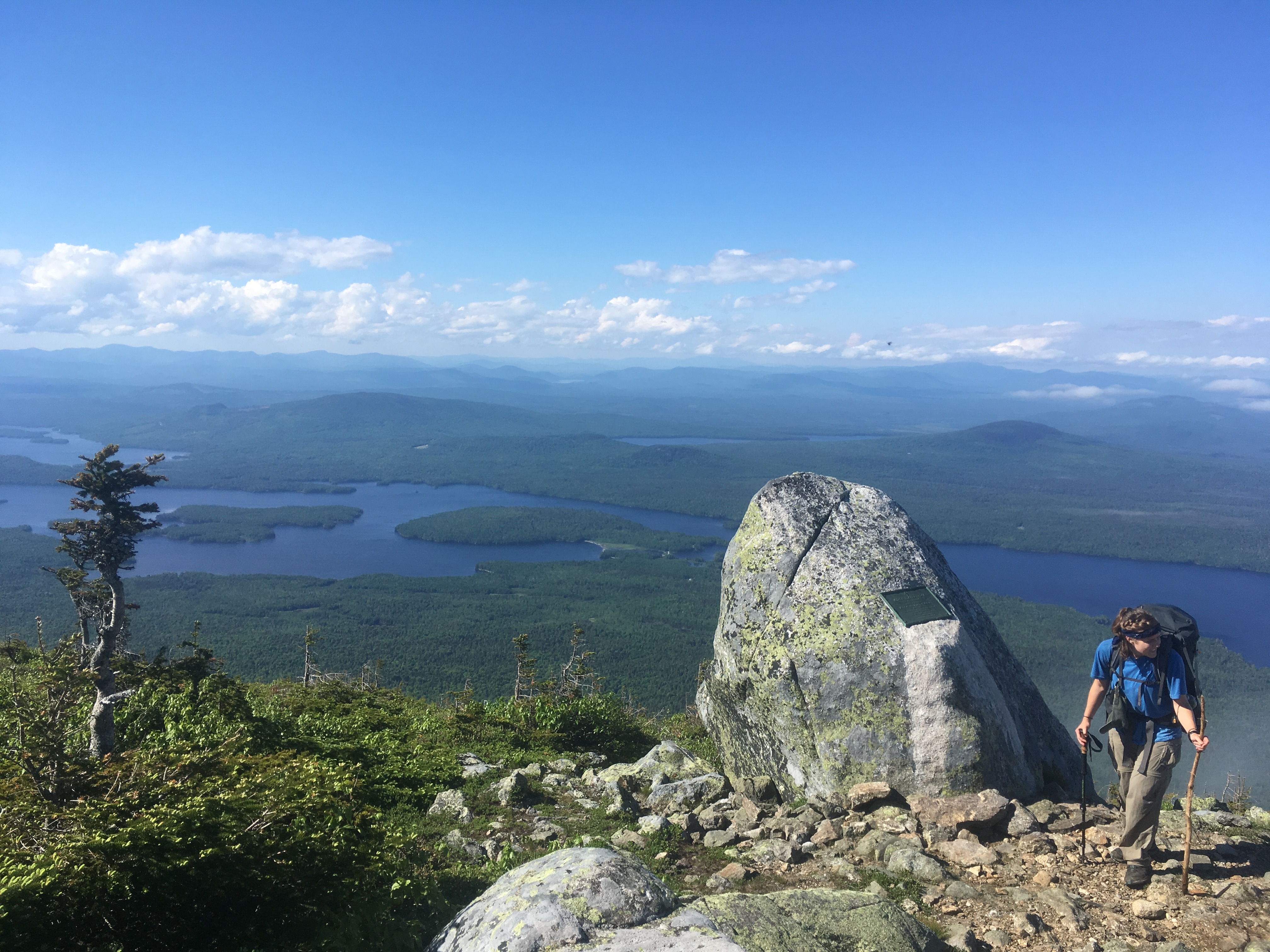 This day was monumental for me. The forecast said storms were coming through the next day, but 23 miles and the Bigelows (massive mountains) were still between us and the next town. We decided we should push to at least get beyond the open summits and planned our longest day yet: 18 miles.

When I say I almost gave up, I mean I was actively planning on stopping at a campsite three miles shy of the target shelter. Luckily, Over It was waiting for me at the water source just before the most grueling uphill climb of the day. Halfway up, we took a break and started talking about comfort zones and I remembered hearing somewhere that most of the time when people give up they’re actually only at 40%. They still have 60% to give, but it’s at 40% that it becomes uncomfortable. That’s when I decided I would make it to the shelter. I would hike my longest day yet over some of the biggest peaks yet. I would make it because I could make it. It didn’t have to be comfortable.

When we got to the first of the two summits, the view was so incredible it didn’t seem real. We were looking down at a sea of clouds to the east with lakes and mountains and just generally gorgeous landscape to the west. We passed my campsite on our way to the second peak. Then from there, looking back at where we’d come from, somehow the view was even more beautiful. The last three miles and a half  were the longest three miles of my life. Over It broke one of his trekking poles and my knees were screaming at me every step down the mountain, but eventually we limped into camp and I didn’t lose that feeling I had when I was on the summit looking down at the clouds. I’d conquered the mountain and learned something along the way; we are all stronger than we know. 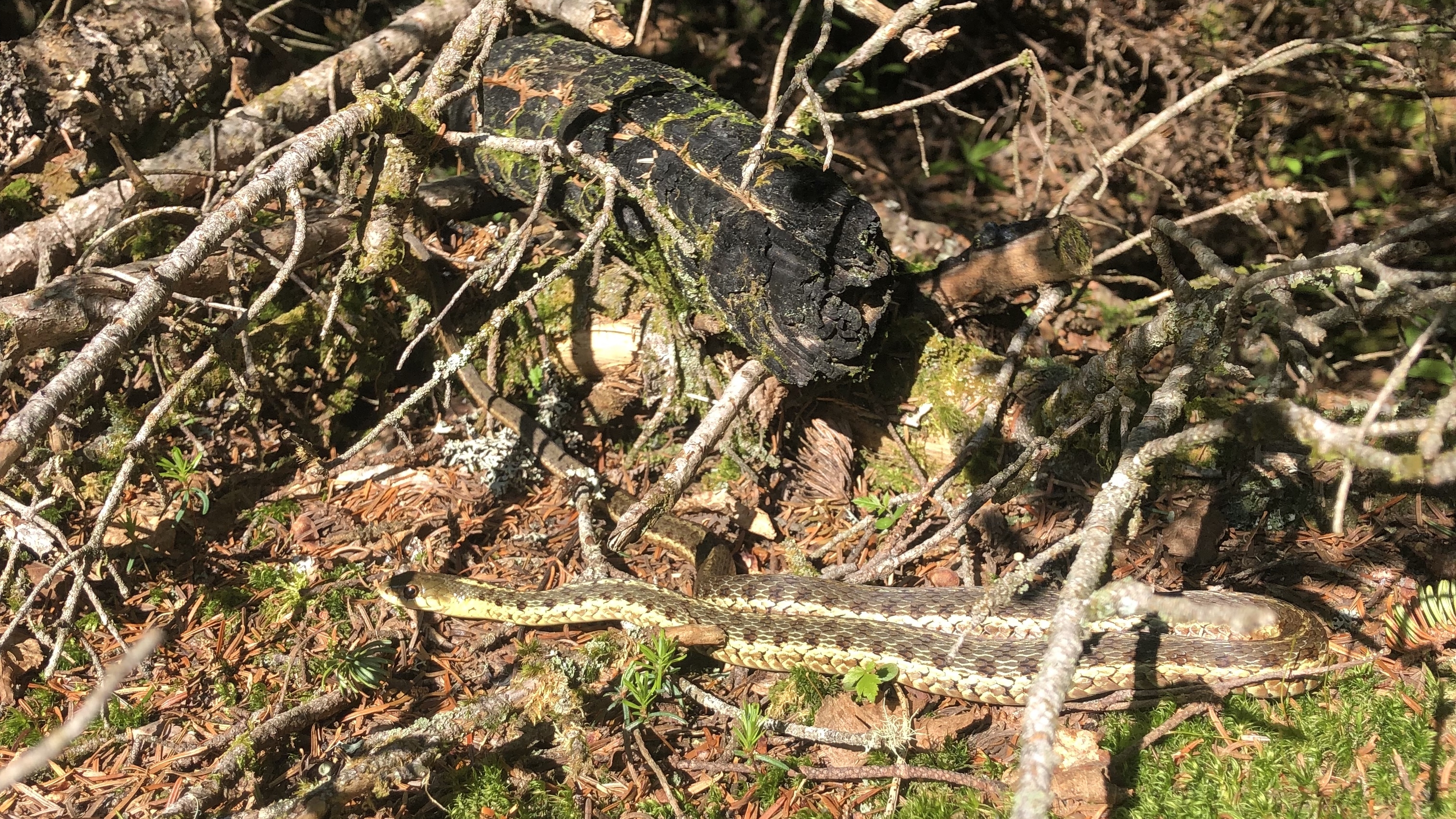 In the morning I tried catching a snake (unsuccessfully) and then hobbled my way down into Stratton to hunker down in a bunkhouse while the storm raged. It drizzled. I walked down the street to hunt for some pizza. 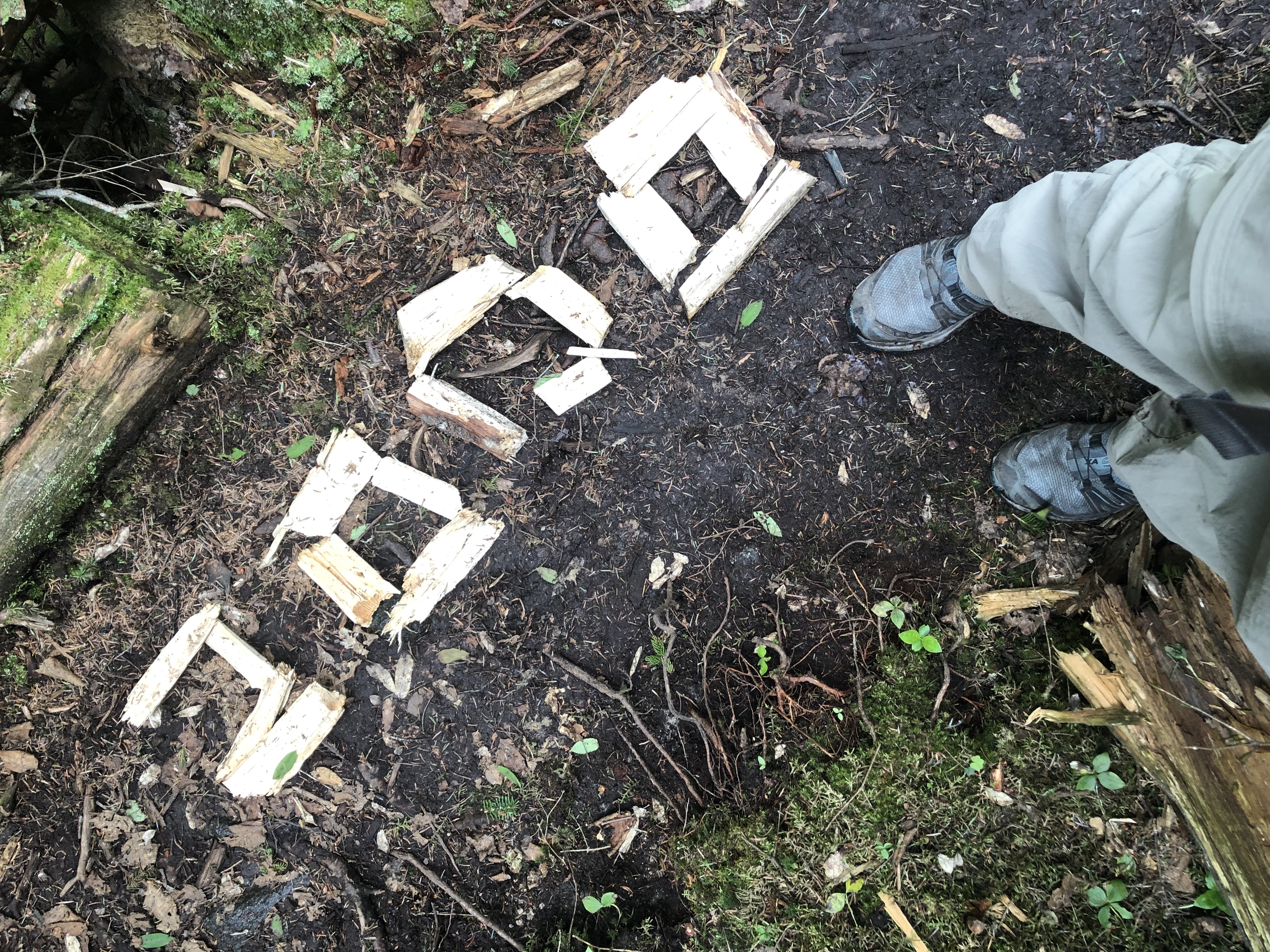 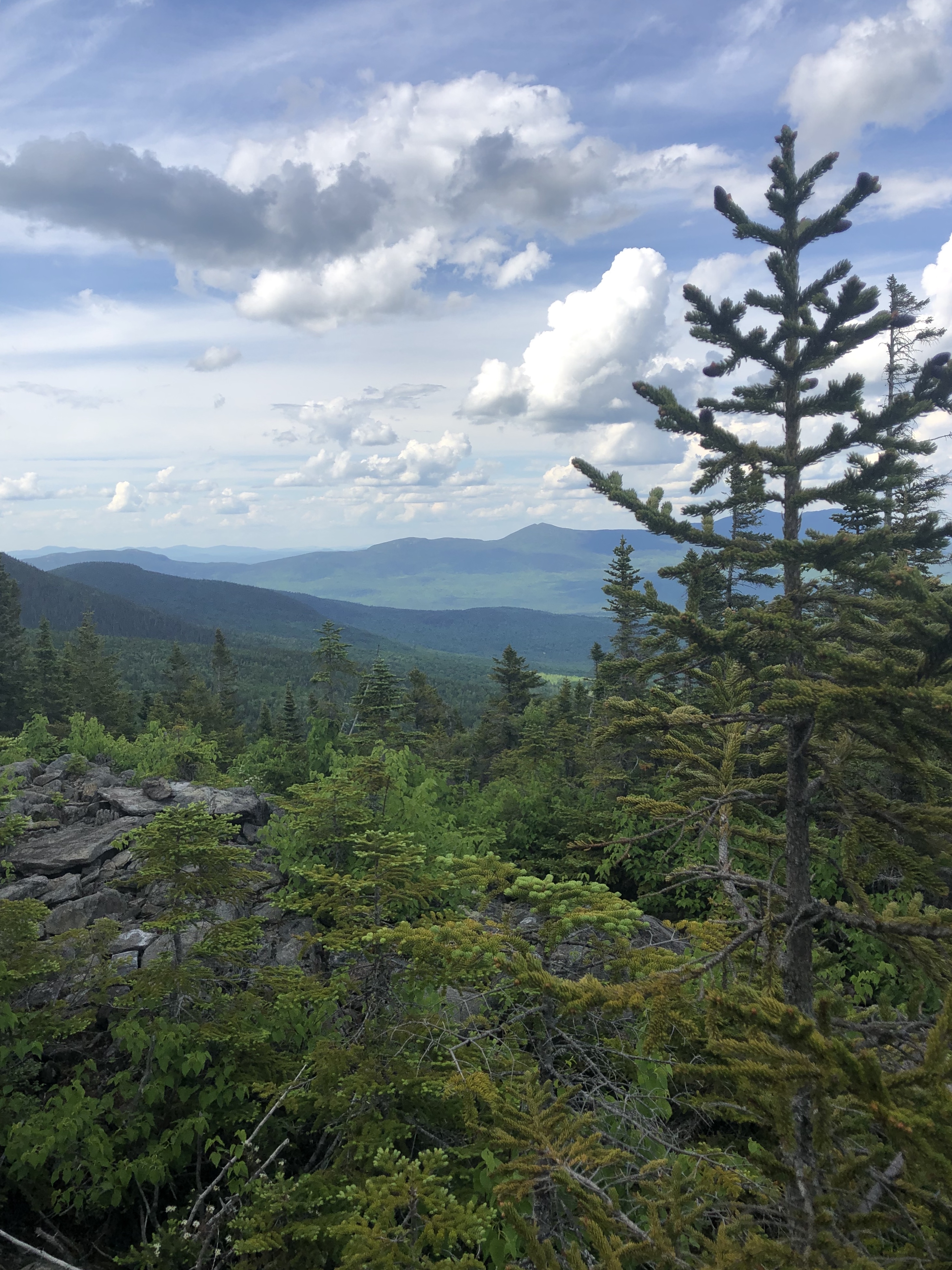 I took the best nap of my life at the top of a waterfall and ate dinner with my tent stake because I’d lost my spoon when I’d stopped for lunch. 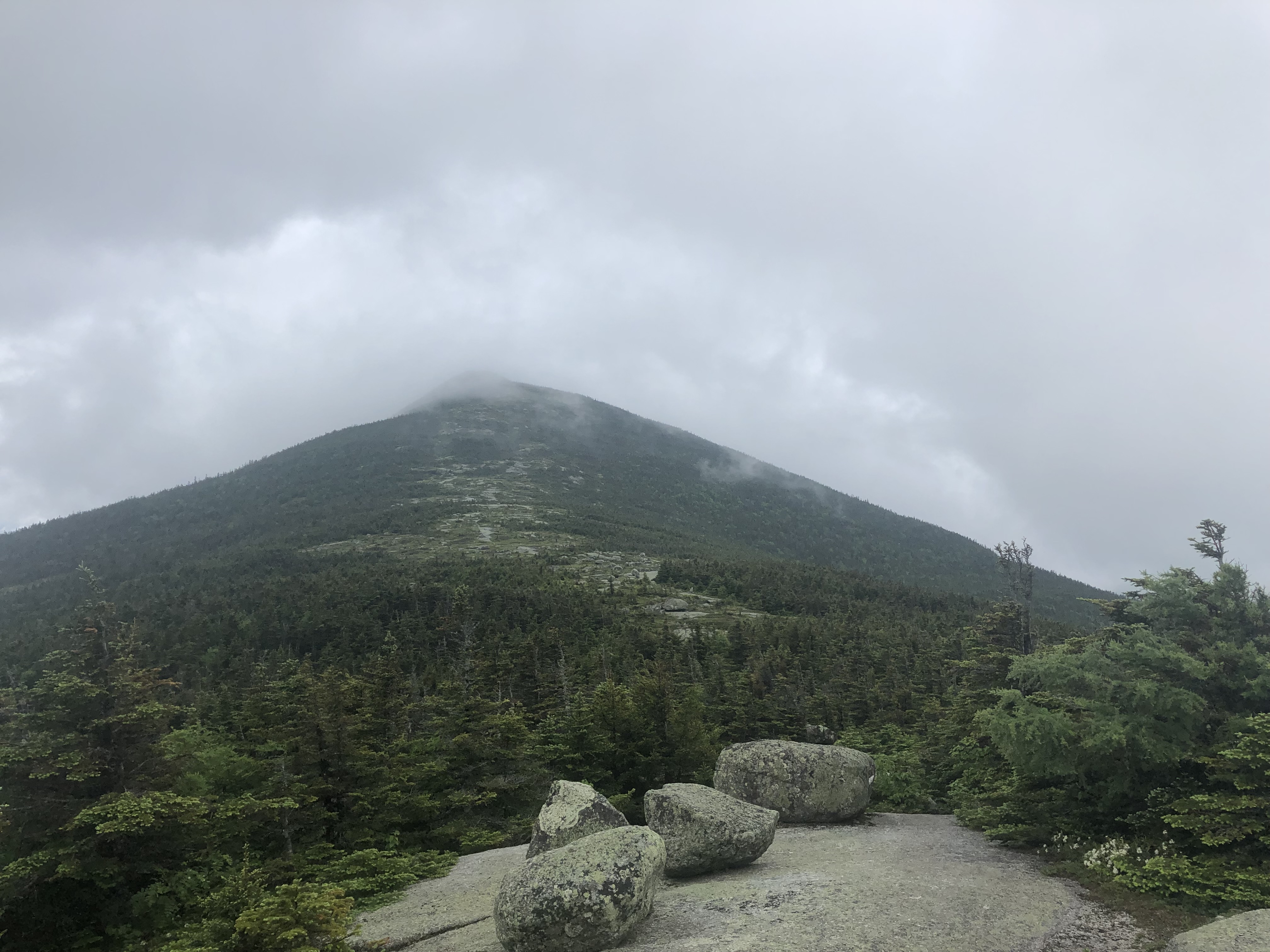 The weather was not ideal for hiking over the Saddlebacks, but it could have been worse. I’d been hearing about these views since I’d started the trail, then I got there and everything was clouds. I was still grateful, though, because even though it was overcast, it never actually stormed and I made it over the mountain without fearing for my life like I would have in a full-blown storm. 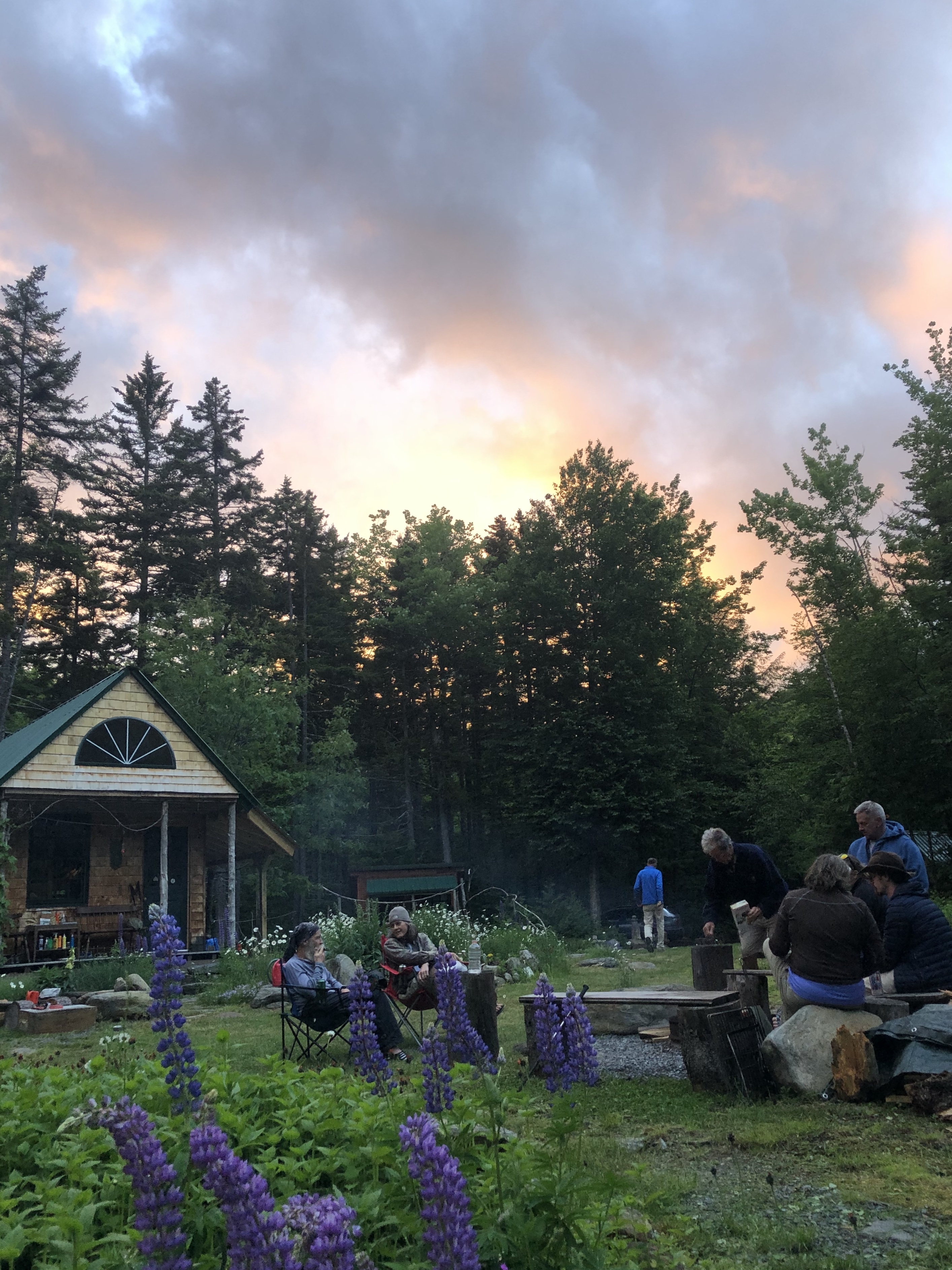 The views are great, the adventure is cool, but hands down the best part of this trail is the people.

In Rangeley, Maine, I stayed at the Hiker Hut Hostel run by a guy who spends half the year running this hostel for hikers and the other half in India providing aid to orphans and children who can’t afford the medical treatment they need.

I fed the resident chipmunk, was fed chips and salsa, and took a hot shower on the bank of the river. Glorious. At night after dinner, I was sitting around a campfire with a group of people I didn’t know, most of whom I would probably only get to spend the next few hours with before they kept hiking north and I went my own way. I don’t know what it was about this place, but in spite of the craziness of all of our individual messes and stories, the group that congregated that night at Hiker Hut sat around a campfire and shared a few hours that to me were some of the most peace-filled of my life. 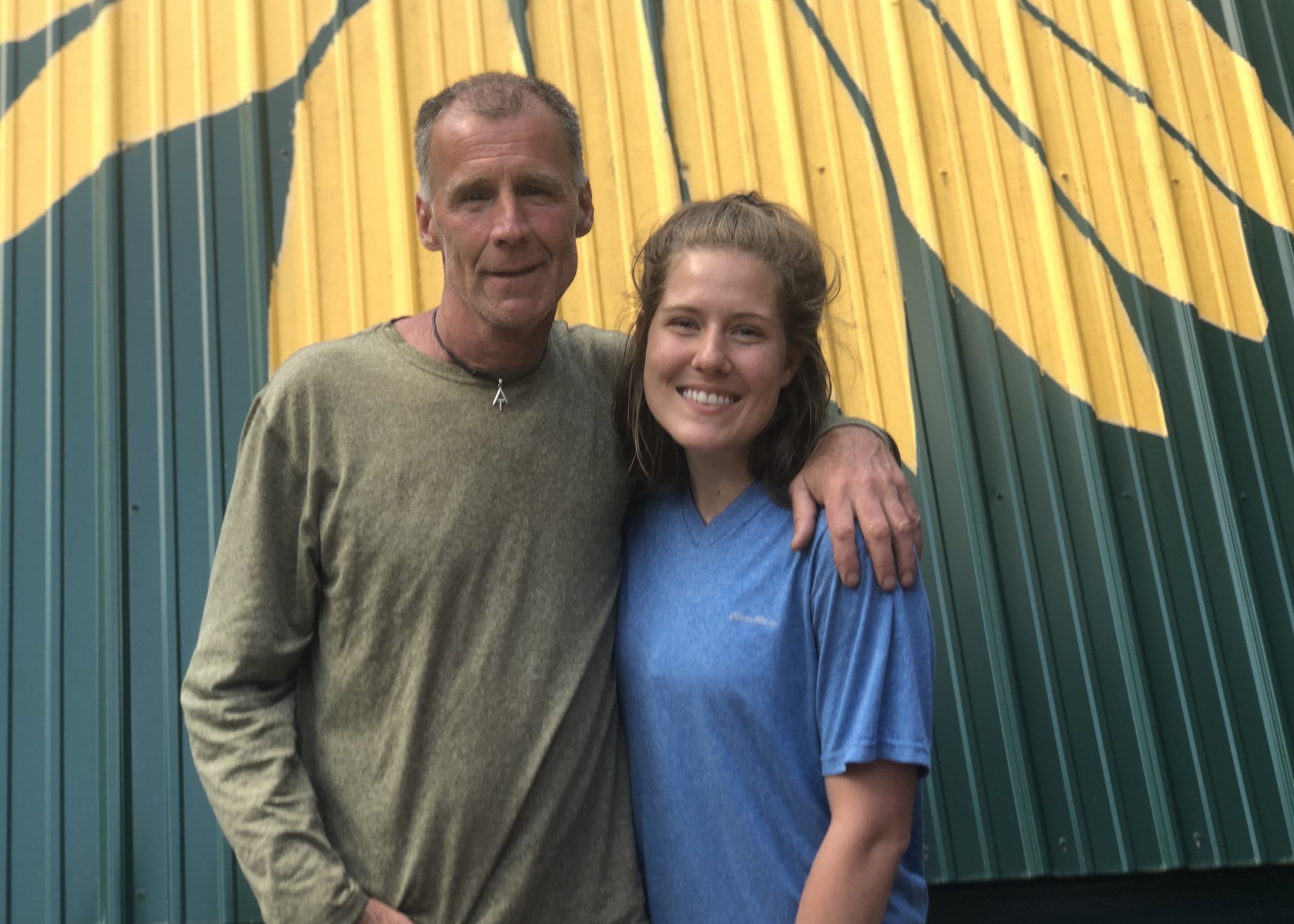 “Your smile is a gift to the world, my dear.”

Steve told me this before I hiked out in the morning. It was a reminder I didn’t know I needed. 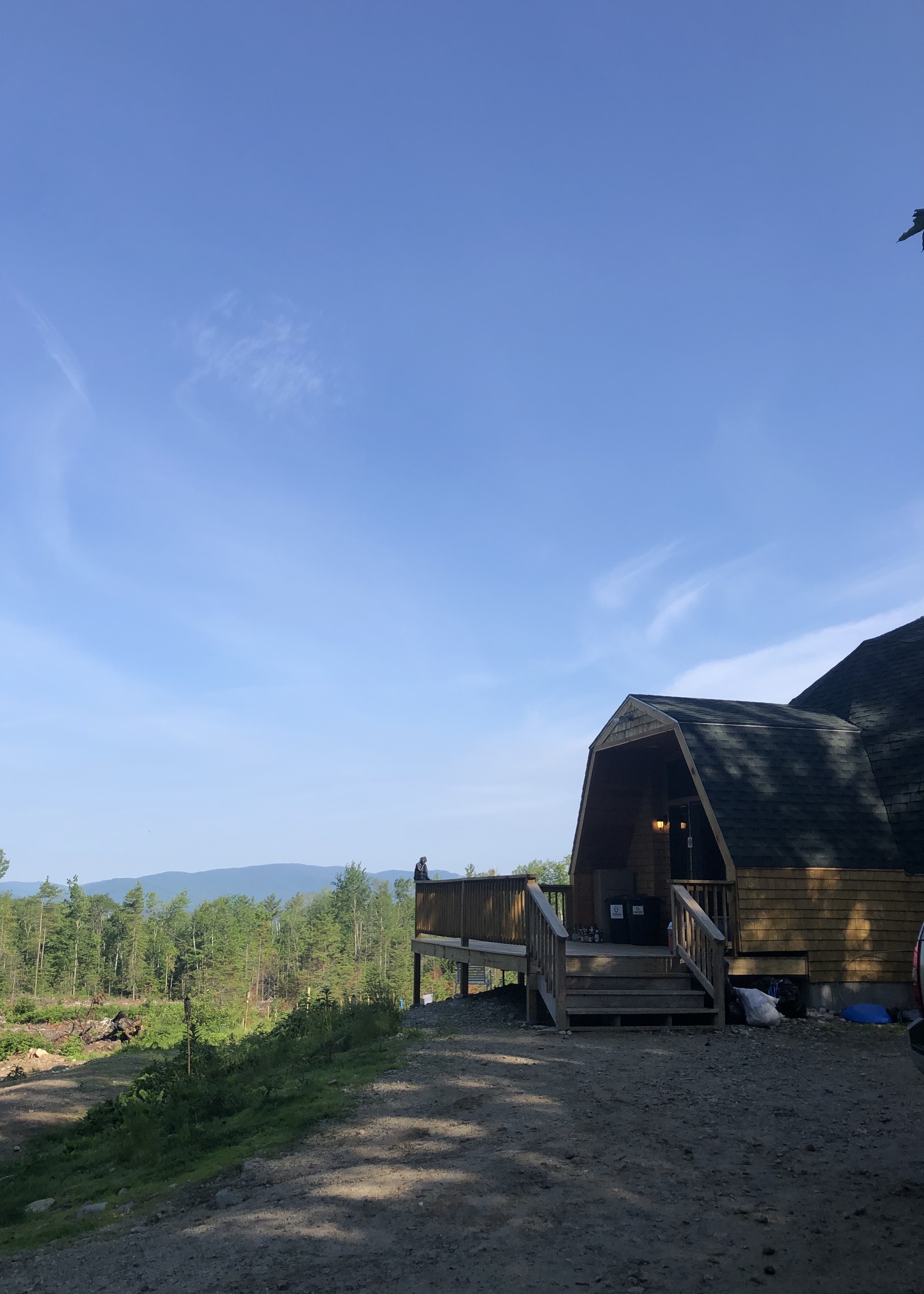 Human Nature Hostel. I probably shouldn’t have taken a zero here, but I’d stayed at a hostel in every one of the last three towns I’d hit and didn’t want to lose my streak. Also, every hiker I’d passed on the trail was raving about the beautiful geodesic dome, the pancake breakfast, and Yukon, the former thru-hiker who runs it.

It did not disappoint. 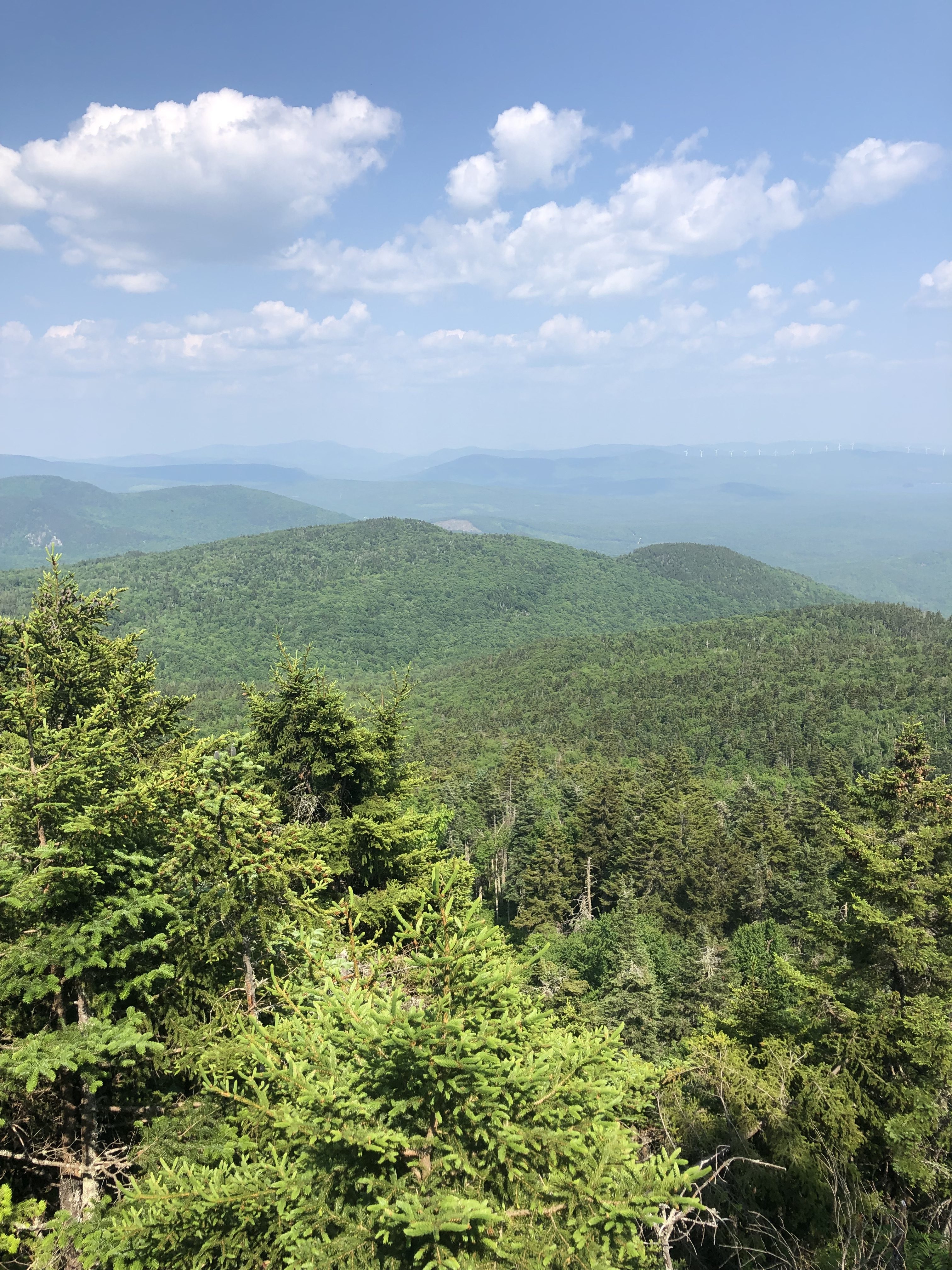 July 4th. I’d forgotten it was a holiday until I ran into some day hikers that wished me a happy Fourth and then I listened to fireworks going off from my stealth site.

Tears. I sat on this particular mountain for two hours and wished it could’ve been longer. 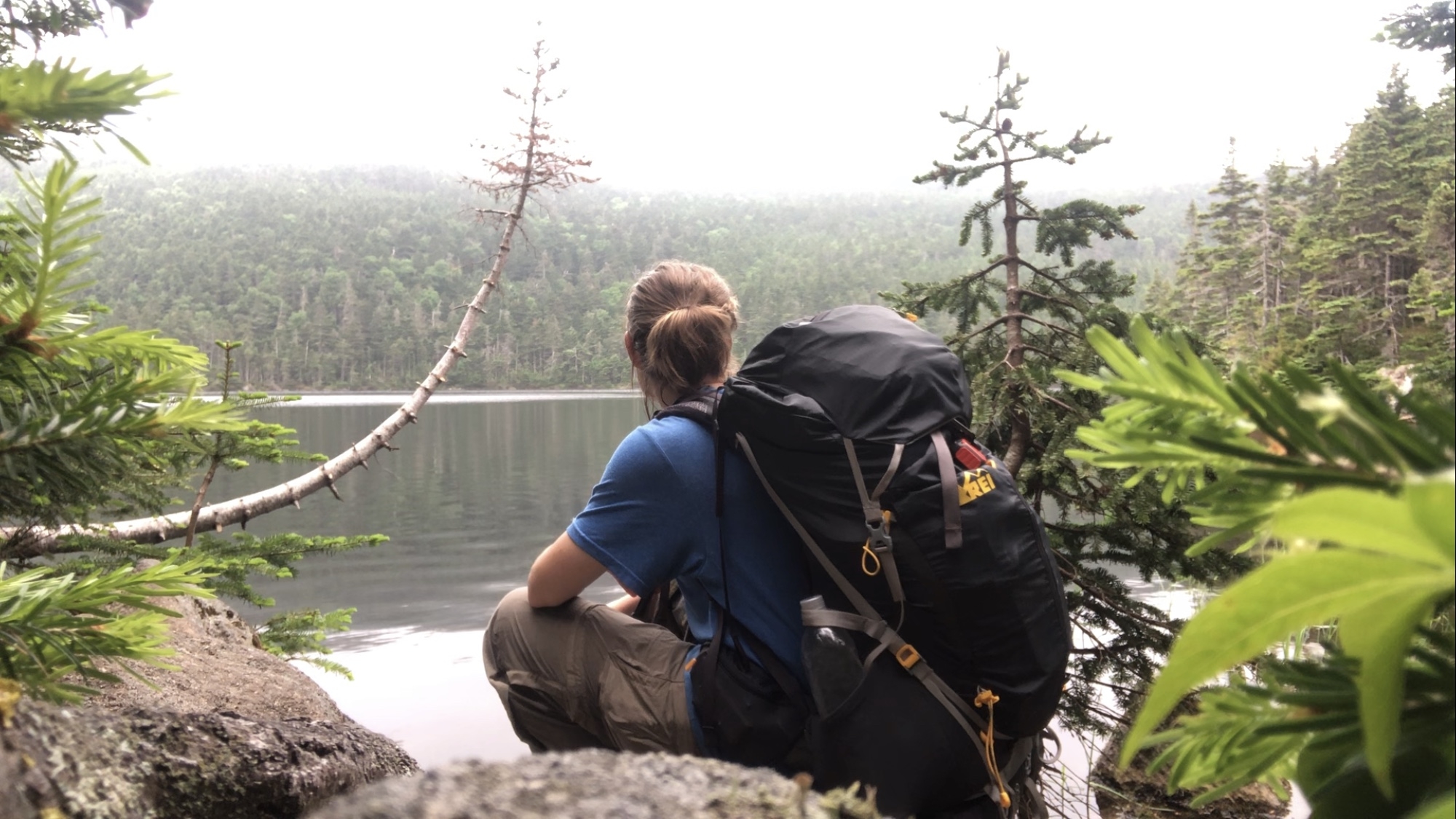 I woke up at the buttcrack of dawn to once again attempt to beat a storm. The forecast called for thunderstorms and a lot of rain around 2 p.m. I was 11 miles away from the “hardest mile of the entire trail:” Mahoosuc Notch.

Between my campsite and the notch was a casual 4,000-footer. I climbed up and over that, struggled down Mahoosuc Arm (which in my opinion was harder than the notch), and then somehow made it through the notch itself and into camp just minutes before the sky opened up. I was more than happy to be forced into the shelter for the night at 3 p.m. 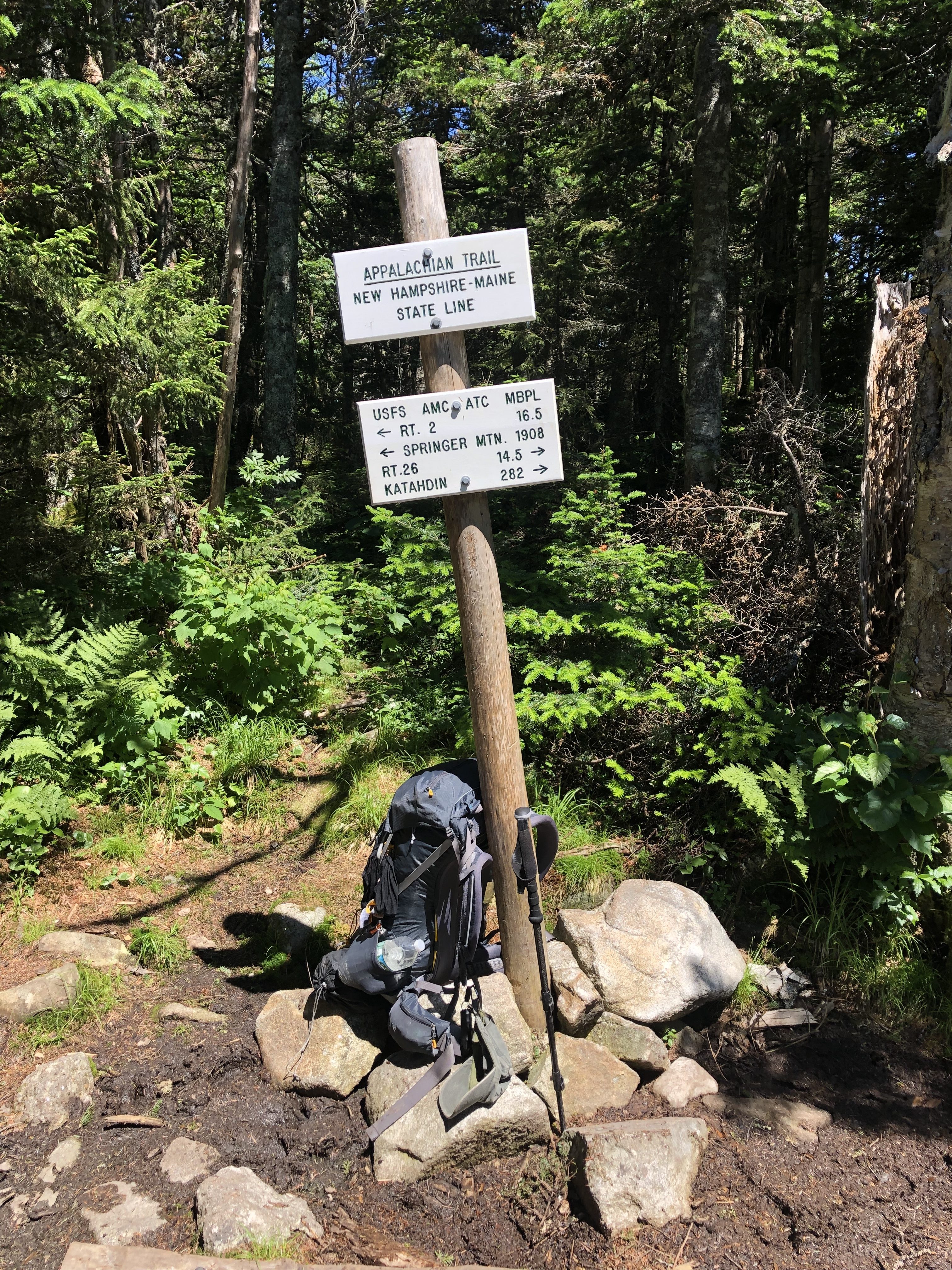 My name is Diana and I’m a SOBO thru-hiker on the Appalachian Trail. My approach to the trail is pretty much my approach to life: I don’t know what I’m doing, so I might as well embrace the adventure.