We got up early with people milling around and talking in the kitchen, since the loft was completely open. We packed up, and I asked about my missing pair of purple socks. They didn’t find them after checking the laundry, which was sad considering they were brand new. Since both socks were missing I figured someone had taken them. Sauce graciously offered an extra pair of socks she was carrying around, but after trying them on I realized they were thicker than mine and my feet were too tight.

We got to the trailhead, and I realized I forgot to grab my poles. Luckily, the shuttle driver was taking a second trip, and brought me back to the hostel after picking up 2 girls at the grocery store. I grabbed my poles, and in the pack room, a hiker was going through the hiker box. There was a pair of socks in them (not mine), and I grabbed it to have a second pair.

I talked to the 2 girls he picked up at the grocery store, Little Forest and Snooze (the second Snooze we’ve met in 2 days). They had lost their tracker and went into town to call their parents. One of the girls hooked her crocs to a zipper, and the zipper slowly came undone and their tracker fell out. Someone found it and is thankfully returning it to them. I hiked with them for a bit and stopped for water and a snack. There was mulch on my water filter so I had to dump and refilter my bottle.

After getting water, I went over the Saddleback mountains. They were exposed at the top, and the views were spectacular. The climbs were not particularly difficult, and today went by quickly. I had service and talked to Louis for a bit. I talked to a hiker named Moving Target who was with us at The Barn. I got to the shelter and found Rash and Piñata along with Little Forest and Snooze. The other trio (Sauce, Snooze, and Keller had moved onto a camping spot a few miles ahead). We ate dinner and talked with Odie who does the hiker yearbook. He made a fire and we enjoyed eating our freshly resupplied food. 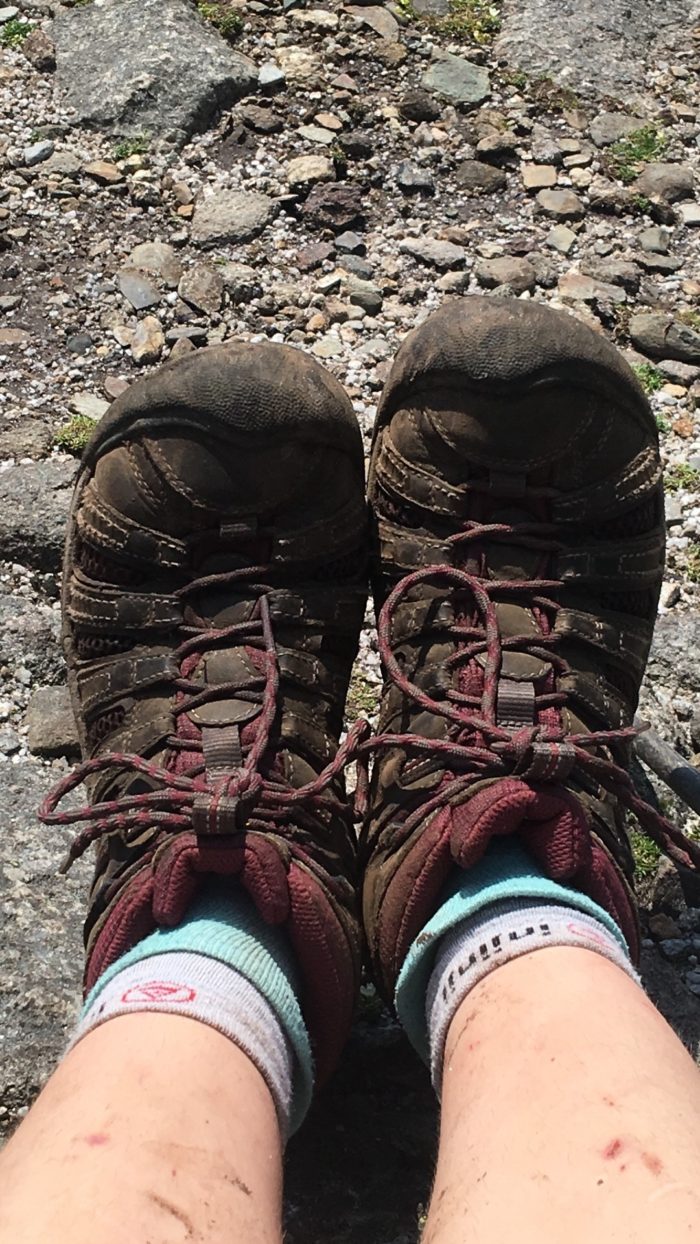 Shoes and socks (not my purple ones)

We woke up to most of the people in the shelter already gone. We said goodbye to Little Tree and Snooze and made breakfast. I lost the cap to my Sawyer, and Rash gave me his off his Platypus bottle since we’re sharing a bag anyways. This shelter was the last one Inchworm stayed, the lady who died in 2013 on the AT. 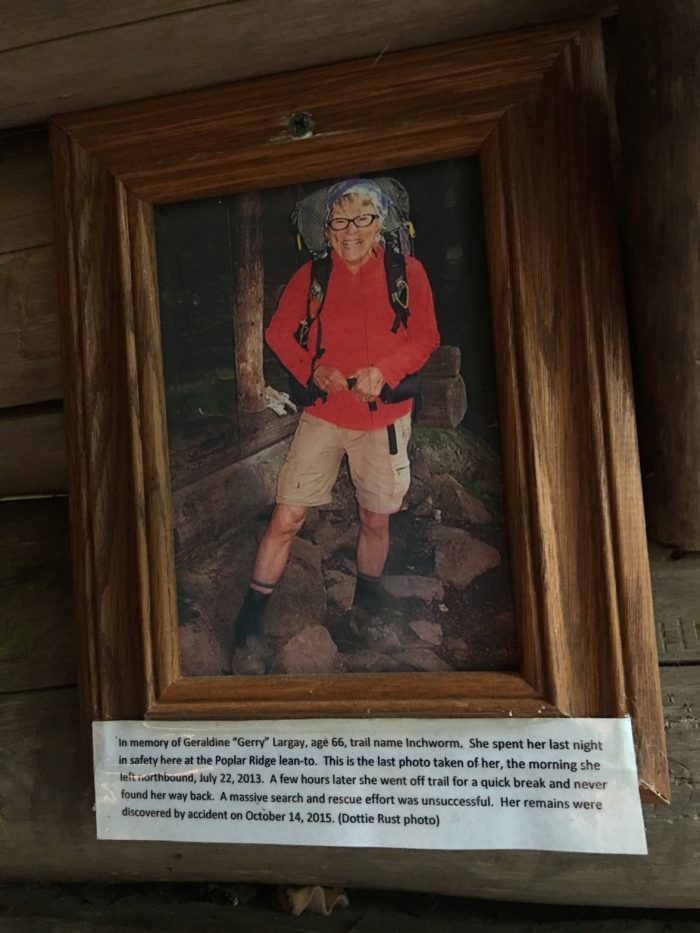 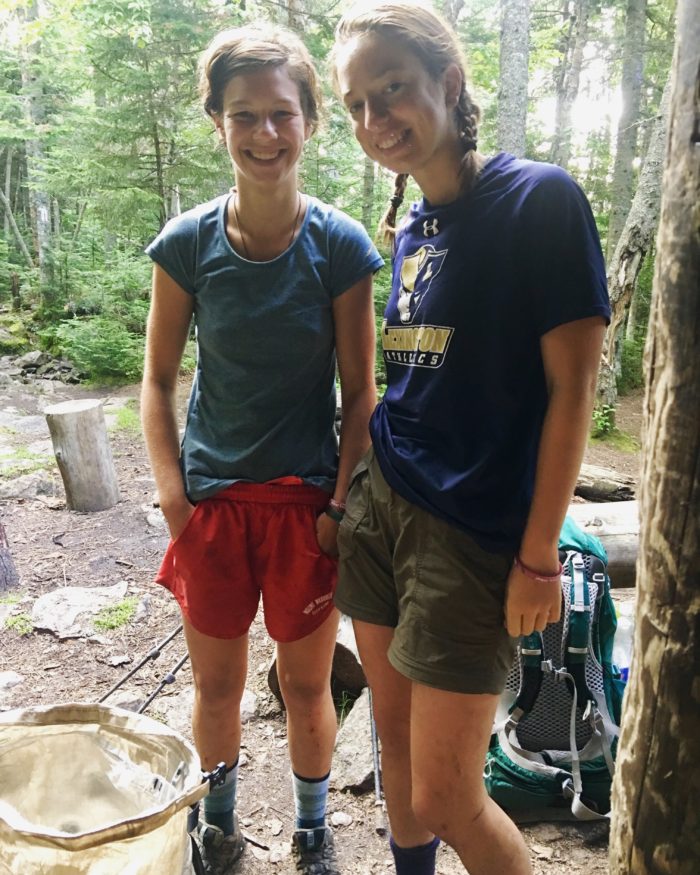 Medicine Man stopped in to say hi. He camped at the campsite before the shelter last night. Birk decided to go home before the terrain got too remote to get a ride home, so she’s off the trail for now. We were really bummed to not have her around anymore. We talked to a SOBO who came in late last night about the terrain and hostels up ahead.

Rash, Piñata, and I left together, and I stopped to pee. As I continued, I had a bad fall forward after catching my foot on a foot. My left knee hit another exposed root, and it hurt like crazy. I had trouble getting up and weight bearing on the knee, so I took a nice long break on a rock until the feeling came back in the leg. At the water source, I filled my bag with the cold water and used that to “ice” the area. After babying the knee up a steep climb and along a flat section, it was thankfully good as new. I was not looking forward to an injury that would cause me to hike off the trail this late in the game. 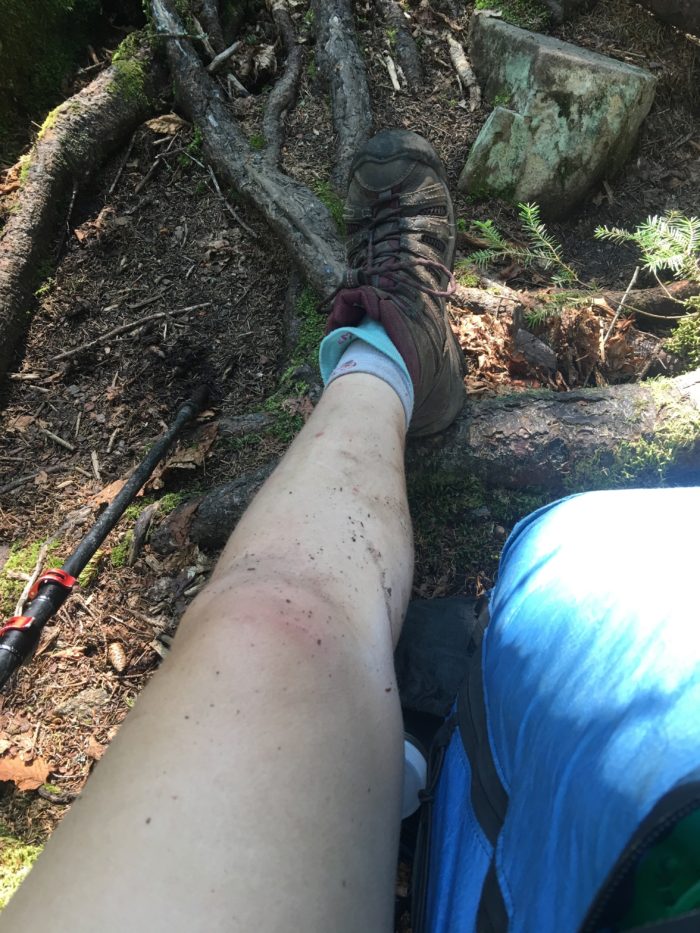 My knee and the offending root in the background

I stopped to get water at another icy cold spring, and did Lone mountain without incident besides it being hot. I stopped at the shelter to use the privy, and almost hiked past the blue blaze to the shelter (the privy was right on trail). I decided to walk down there quickly to check it out, and found Rash and Piñata sitting on their pads in the shelter. We caught up about the day and Rash showed me a solar charger he found at the shelter he was using the charge his phone. We spent over an hour lounging and relaxing, talking to Greybeard and 2 SOBOs (Sweet Monkey from Indiana and Organic from Brazil). 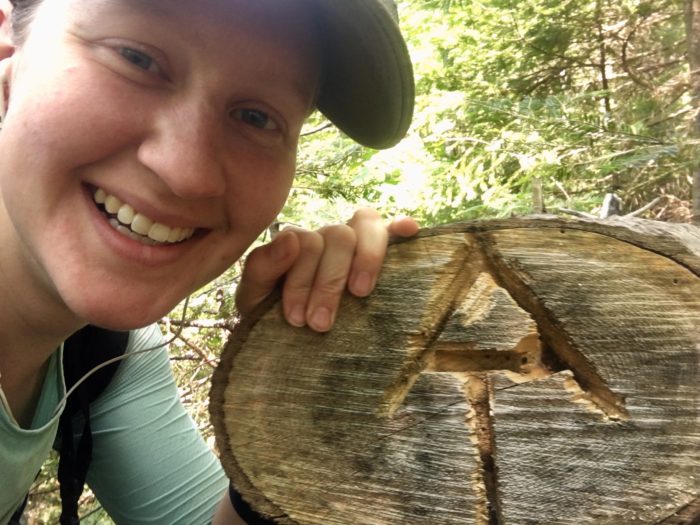 AT symbol carved in a cut tree

Rash, Piñata, and I left together, and stopped to take pictures of the 200 mile rock sign. Piñata fixed it with a “.9” after since it was a bit off. We hiked past a brass sign and took pictures with Greybeard, and then passed Sugarloaf. None of the climbs were particularly difficult, and I was enjoying the occasional views and the trees. 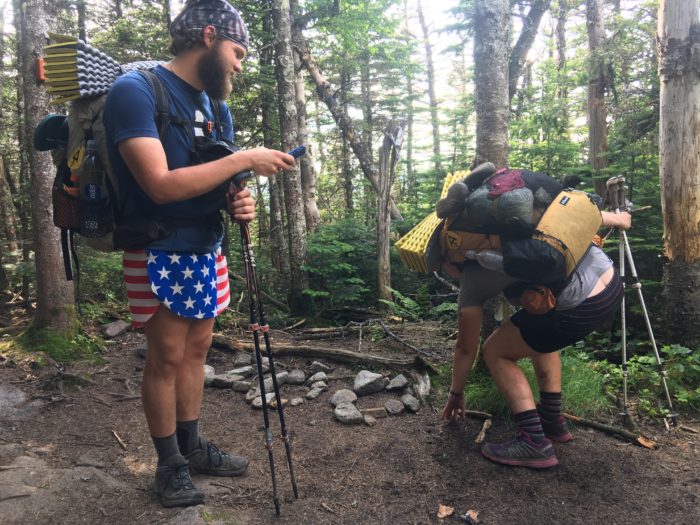 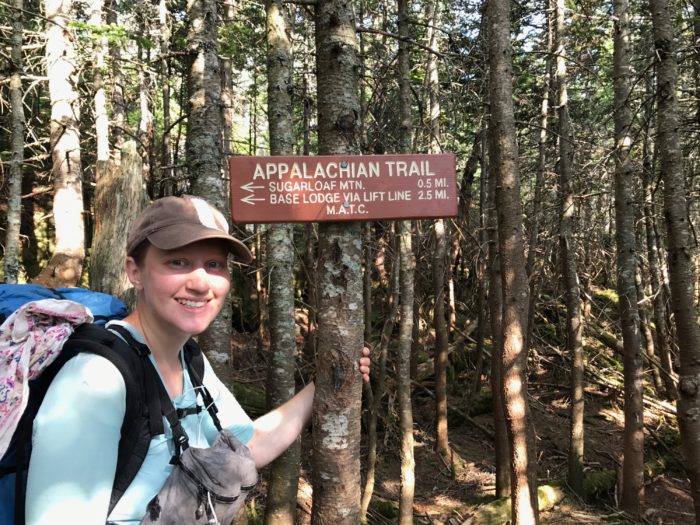 The descent was another beast altogether. It was ridiculously steep and rocky. If we were climbing it, we would’ve been doing hand over hand. Going down was more like foot over pole, trying not to slip face first down the mountain. I stepped on a sharp stick which flung up and cut my leg, right next to where I fell this morning. 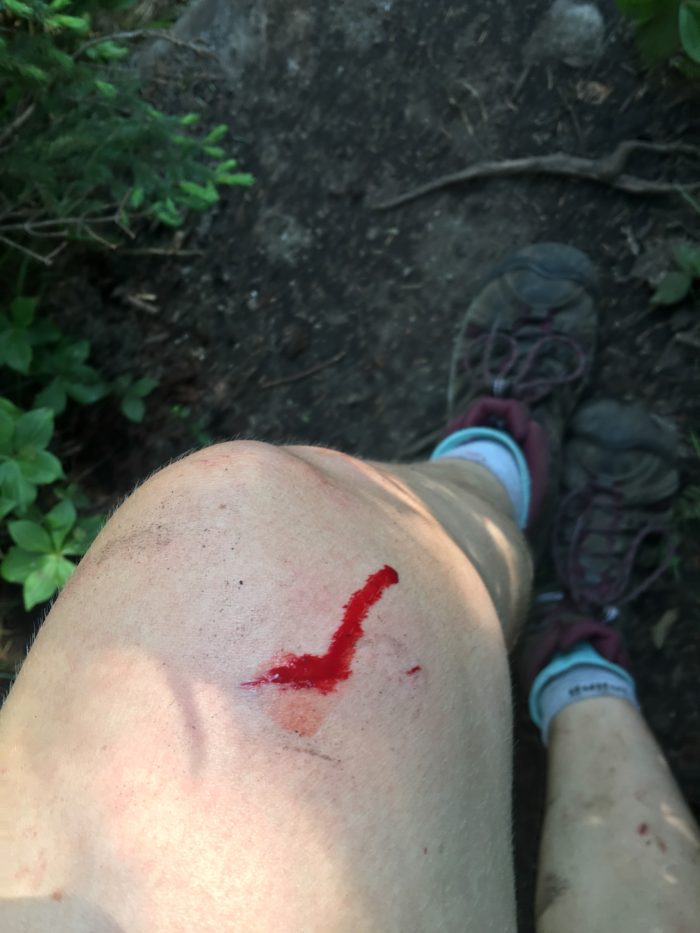 I crossed another river by rock hopping, and talked to a few SOBOs. I called my mom and talked to her for the remaining climb, and also at the water source as I filtered both my bottles and packed out a full dirty bag. At the campsite, I hung my hammock as Rash and Piñata hung their food bags. Piñata hung on a dead limb that ended up falling as Rash pulled on it. Rash went to the nearby pond to look for moose but came up empty handed.

My hunger has increased the past couple days, so I went through my snacks and Piñata’s left over chow mein as mine cooked. It started to rain so I had to move under my tarp. Tomorrow is my birthday and we hit 2,000 miles!

I woke up at the campsite around 5am to the sound of Rash or Piñata getting out of their hammock. I thought they were packing up, but I was still tired, so I didn’t move. I could see the mosquitoes buzzing inside my tarp against my bug net. Around 7am, I got up, and found out it was Rash going to check the pond for moose (with no success). We ate breakfast, and I got sap on my puffy from leaning against a tree.

We started the climb out of the campsite and came to the top, where I ate the Twix I’d been saving. 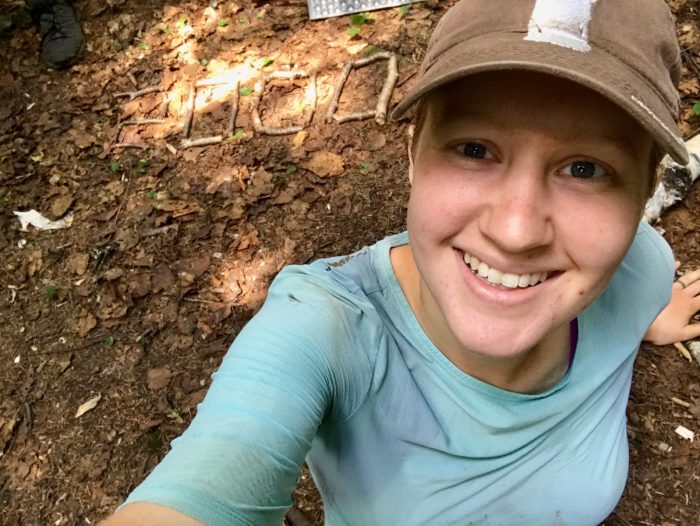 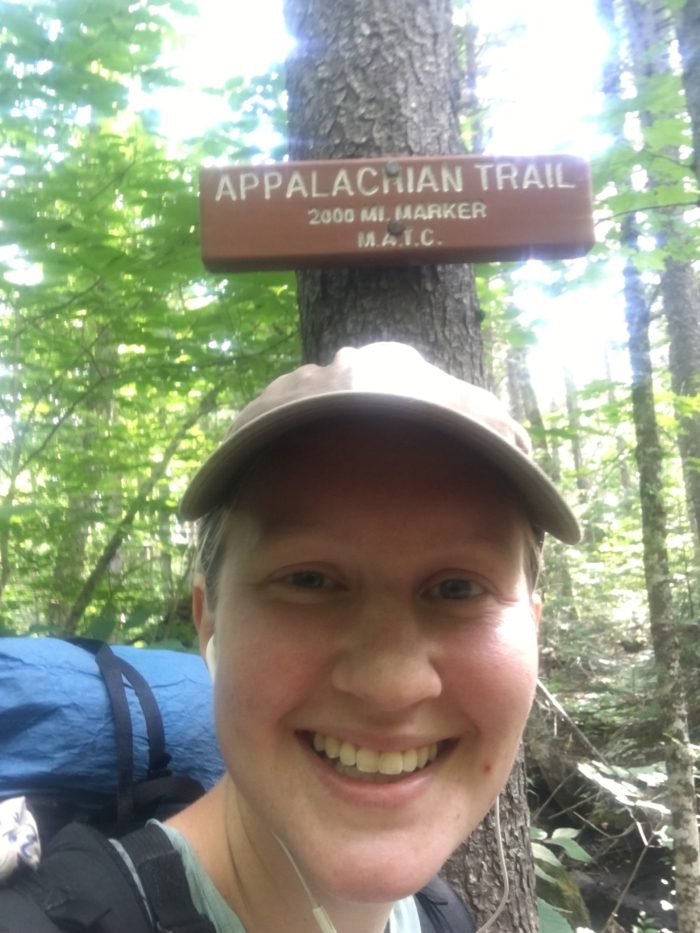 We hiked down the mountain and reached the 2,000 mile mark. It was an amazing feeling, but less shocking than reaching the 1,000 mile mark. We lounged at the marker for a while, then hiked down to the road. We got a hitch into Stratton from a couple with a beautiful Australian shepherd sticking its head out of the window. The man had kayaked the east coast from Maine to Florida. We got to the store to resupply, and we bought sandwiches at the deli. Mine had roast beef with chipotle mayo, and was called the ugly moose. 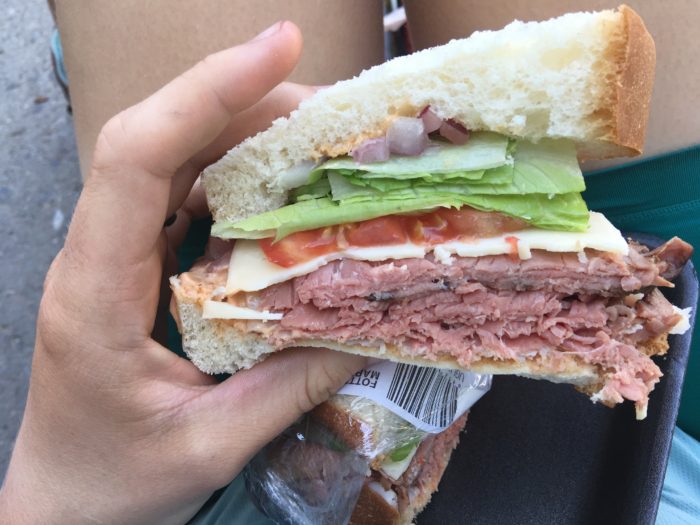 We ate outside in the shade by the ice machine and packed up our food. We spent a while lounging and snacking, then hitched back to the trail. I was tempted to stay in town for the night since there were hotels and motels all around us, but it made more sense to hike out. We stopped for water and Rash and Piñata hiked ahead. I called Louis and we chatted as I went up the huge climb to the shelter. I wasn’t even half way done by the time we got off the phone. It wasn’t particularly steep, it just felt never ending. When it flattened out, the temperature dropped and I was freezing from being damp from sweat. 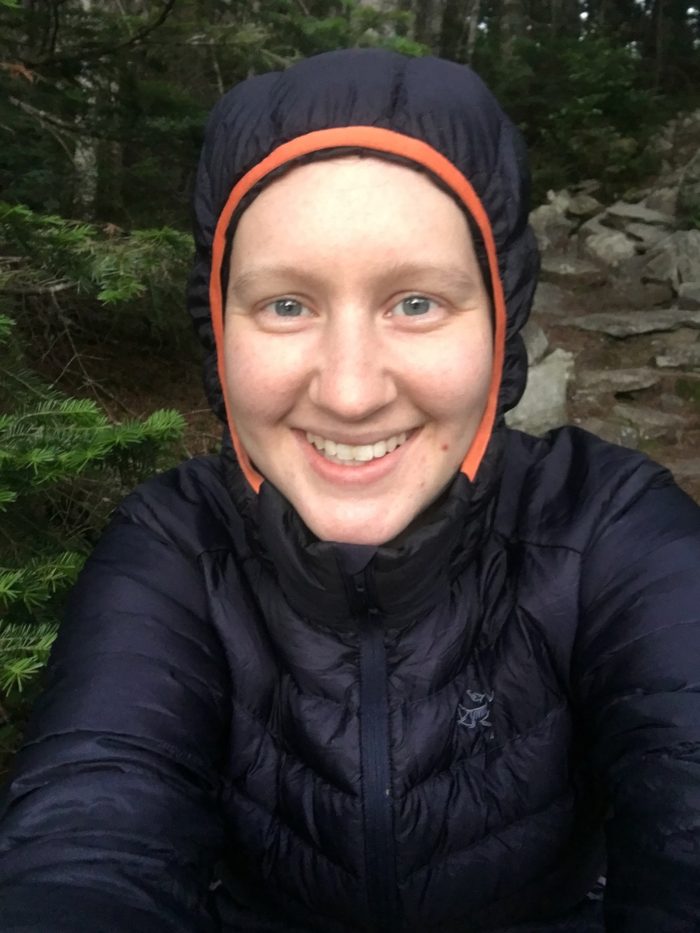 Engulfed in my puffy 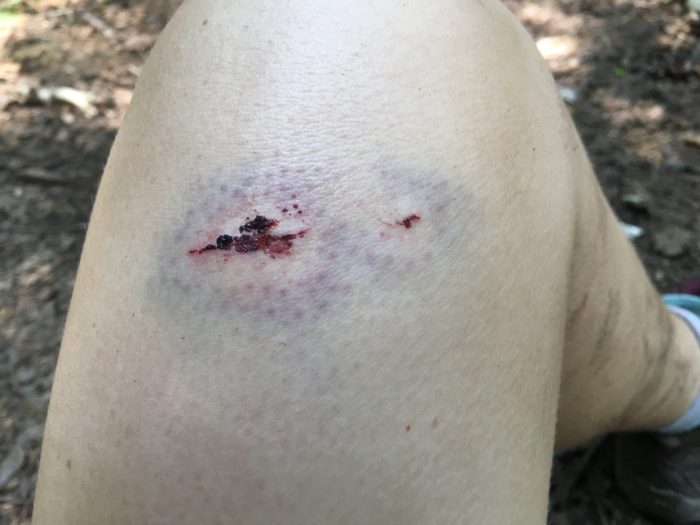 My root attack from yesterday getting some nice color

I got to the shelter, but the structure right on trail didn’t have a floor, just benches. It was strange. There was a caretakers tent, and I followed the sign for tenting. I found Rash and he pointed me towards the cleared area where they were setting up. This campsite is massive, and the structure without a floor is the day use cabin. The 2 shelters were down another path. We set up our hammocks and went to the pond to moose watch and filter water. The water was strangely lukewarm despite the chilly weather. We brought snacks so we spent an hour there talking and filtering the water. It was starting to get dark by the time we finished, and the temperature dropped even further. We hurried back to the campsite where Rash cooked dinner and Piñata and I got into our hammocks. 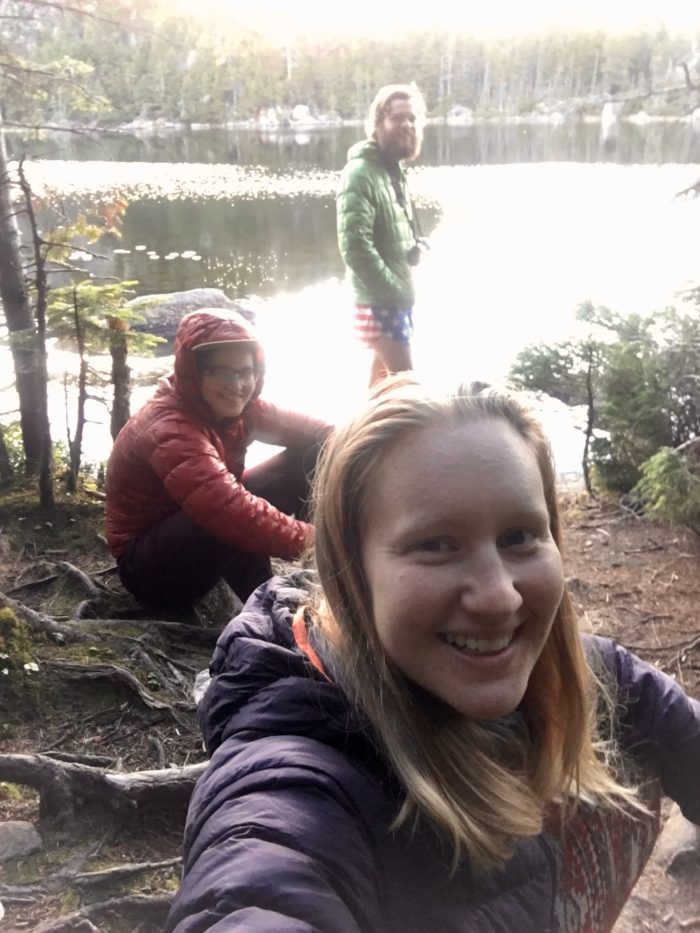 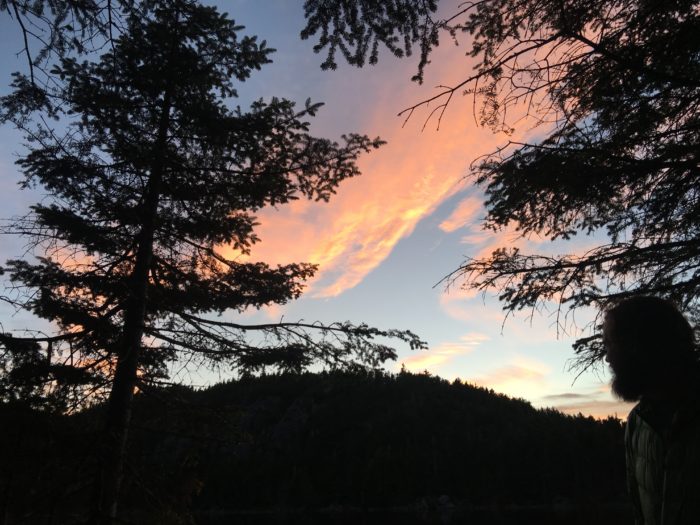