We both woke nice and early. The unfortunate part of not sleeping at a shelter is the lack of privies. But privy or no privy, nature calls and we must answer. I uncomfortably found a suitable location deep in the woods and performed the morning constitutional. You might be thinking, why am I including this? Well it was a day not too jam packed with events, so I need some filler.

Margarita and I started on the trail before anyone else in the camp was up (Actually, I just remembered, Signature woke up with us, but he did not catch up). We tackled the first few minor climbs with ease. Frogs were more prevalent today than the days before. Giant ones with bulging bellies frantically hopped off the trail when our feet neared their ball-like frames. I was honestly getting worried smushing a frog.

Mt. Abraham, Spaulding, and Sugarloaf summits were passed off in favor of staying on white blazes which saved us a lot of time.We descended this range and stumbled onto the S Branch Carrabassett River where we stopped to take a short lunch. An all girls summer camp passed us going SOBO. When we asked where they started and where they planned on ending, they said they were doing the whole of Maine. Color us impressed. That is quite the summer experience.

The final range for the day was the Crocker, North and South Mountains respectively. The climb was gradual and didn’t really get exposed until the very end where we walked through a small rock field. North Crocker summit represented our last fight of the day, and we took a short break to take it all in. This summit also served as the 2000 mile marker. We were officially 2000 milers! We met a couple of other hikers at the summit, and we all basked in this achievement briefly. But we couldn’t stay for too long because we now had a logistical obstacle to face. We both didn’t have enough food for tomorrow, so that means we had to go into town. As we descended, I called numerous shuttle drivers and received only voicemails. Yes, we could hitch, but because time was of the essence, a shuttle would be the most time effective. Eventually I found a shuttle driver via the Hostel of Maine, and they said that a van would be at the parking lot below in an hour. Upon hearing this, we zoomed down to the bottom of the mountain and waited patiently for the shuttle. Conveniently, there was a couple at the parking lot looking for a hiker that had dropped their passport. They asked if we had seen him in which we said no. Seeing an opportunity to avoid the shuttle fee of the Hostel, we nicely asked if they would be able to drive in and out of town. To our surprise, they were excited to help. I called the hostel to cancel the shuttle and then hopped into the car.

In the car, we learned that the couple was connected to the group of trail angels that served us at Bemis road days ago. Apparently the disappearance of Geraldine Largay inspired the community to be more present in the lives of hikers. Funny thing is that they weren’t even hikers; they snowmobile and hunt. We all appreciate their stewardship, especially in a state like Maine where the ruggedness could break any strong soul.

They took us to a local market in Stratton where we went in and out in to time. We were back at the trailhead within an hour and enjoyed a nice little lunch in their trunk. We finished and thanked them for their hospitality and went on our way. There was a big climb ahead to the shelter we wanted to stay at tonight. The plan was to enter the Bigelows tonight and then tackle them tomorrow morning. Then we will be free until the 100 mile wilderness. We trudged up the trail and Maine was really giving us her all. Roots were coming out of the ground in all directions, and I’m sure if we give this trail another 100 years those roots will be floating in the air. The trail kind of looked like something out of the Upside Down (Stranger Things) or something from Lord Licorice’s kingdom (Candyland). 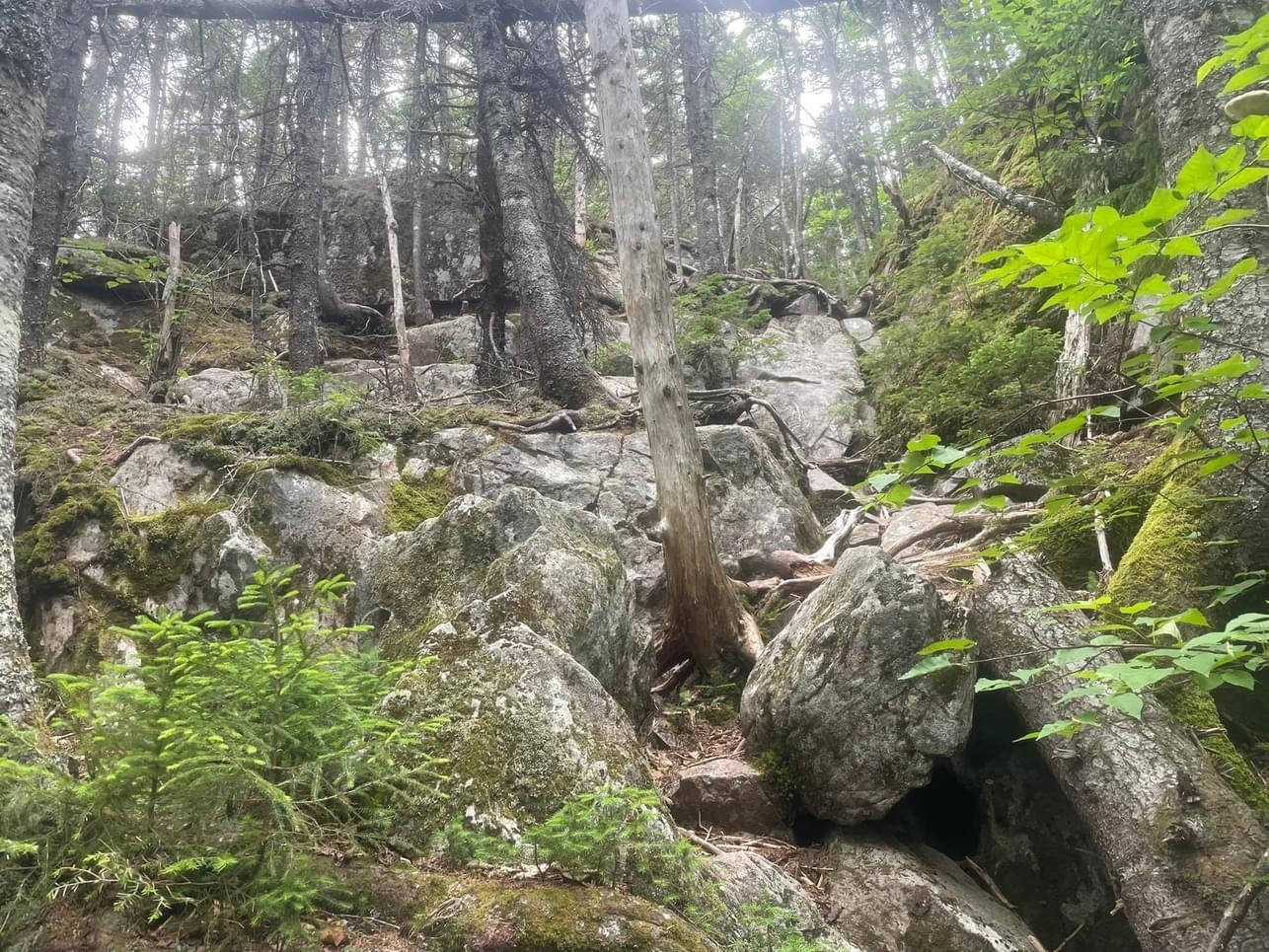 How is this a trail?

Eventually we got to the top and stumbled into camp. At the shelter we met the MATC caretake who rocked some sick jorts and a white t shirt. There were also some SOBOS that we had dinner with in the shelter. We took turns scaring each other of what is to come next. Thing is, we knew that everything coming ahead was stuff we had already seen. They hadn’t seen New Hampshire yet.

It was still bright out, but we tucked ourself into bed early. We sensed a rain coming, so we said our goodnights and retired into our tents. I facetimed my parents from my tent (I was very surprised I had service in Maine) and then forced myself to sleep. It did in fact rain that night.