For the third year now, we surveyed long-distance hikers who completed a section or thru-hike of the Appalachian Trail in 2016.

This year, we expanded the survey to include questions not only about main gear items, but also more detailed demographics, the timeline of their treks, their favorite sections of the Trail, the sections they found the most difficult, their hiking partners, and their adherence to Leave No Trace practices.

187 people who hiked on the Appalachian Trail in 2016 took the survey. 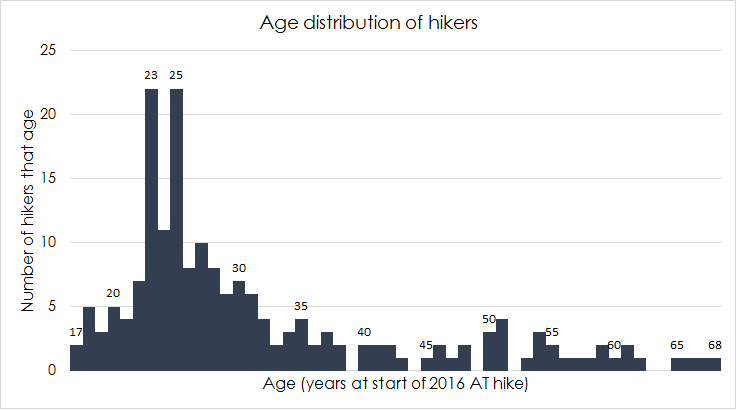 Women comprised 42 % of hikers in the survey, while about 58% of hikers were men.

The vast majority (94%, n = 174), of hikers in the survey were White. Six hikers were Asian, 4 were Hispanic/Latino, and two were multi-racial (White/Asian and Asian/Native American). 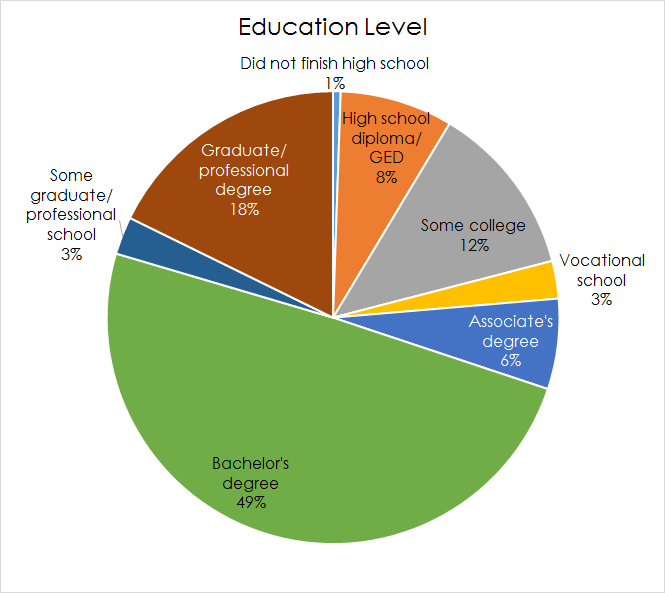 Nearly half of hikers in the survey had bachelors degrees. Note that the one hiker who had not yet finished high school was only 17 years old. 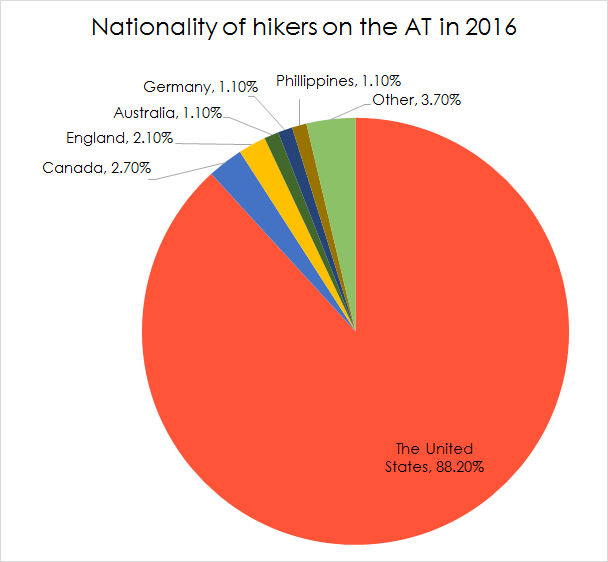 Nearly all hikers were from the U.S., with Canadians at a distant second. 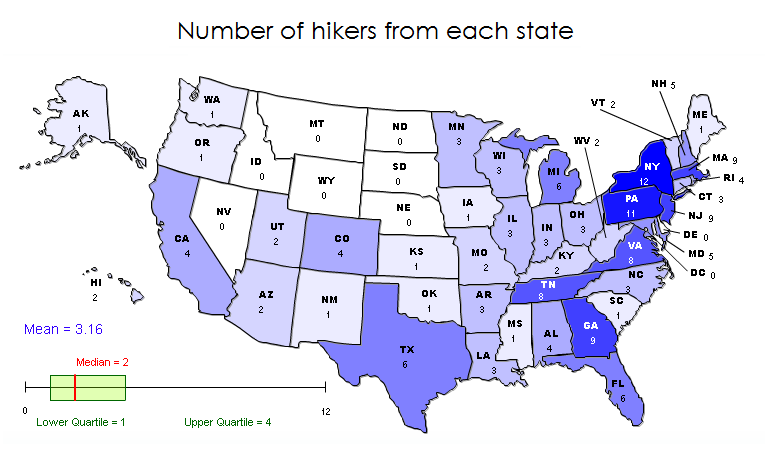 Hikers were predominantly from the East Coast, particularly from states that the Appalachian Trail passes through. 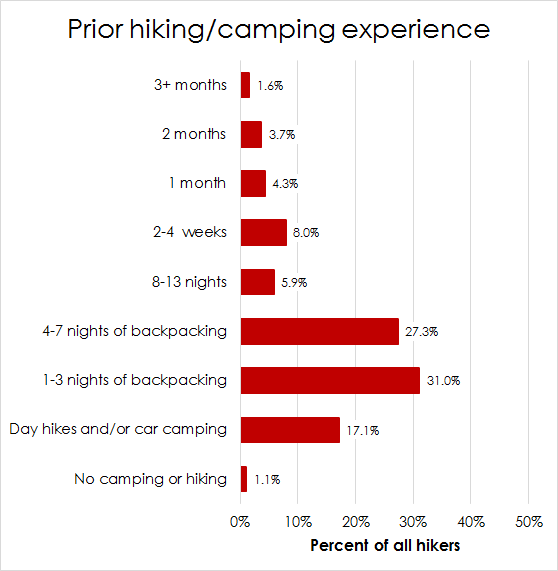 The majority of hikers had gone backpacking between 1 and 7 nights. Very few had no camping or hiking experience, just as very few had done long-distance backpacking. 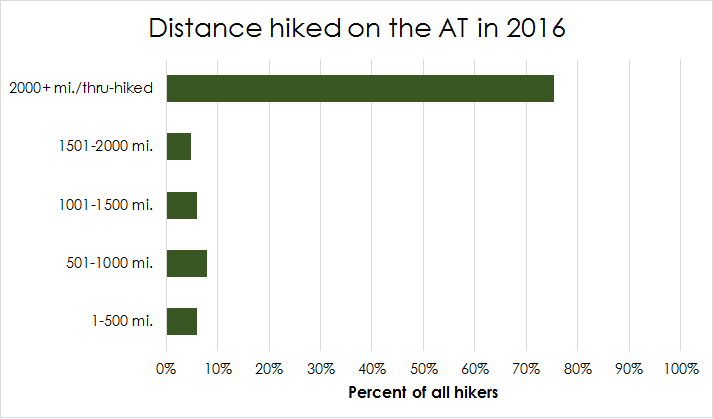 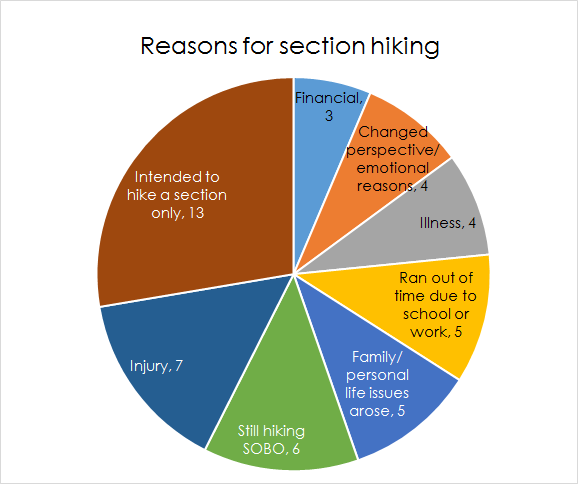 Of the 46 survey participants who did not thru-hike, only 13 had intended a section hike. The other 33 were unable to finish intended thru-hikes. Injuries were the most common reason that hikers quit. Note that six hikers were still on the Trail at the time they responded to the survey. 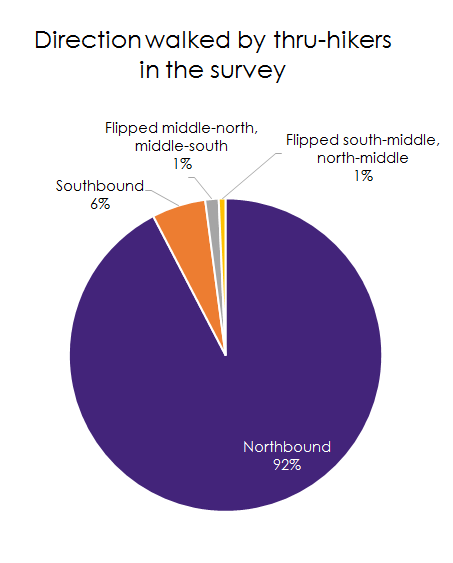 The vast majority of thru-hikers who took the survey walked northbound. This is by far the most common direction for AT thru-hikes, but southbounders were somewhat under-represented, due to time constraints in conducting the survey before many of them may have finished.

The majority of hikers started their hikes between early March and early April (with April 4 and 6 being the most popular dates), which is considered the “Bubble” for AT thru-hikes. The earliest hiker began December 29, 2015, and the latest start date was July 23, 2016. 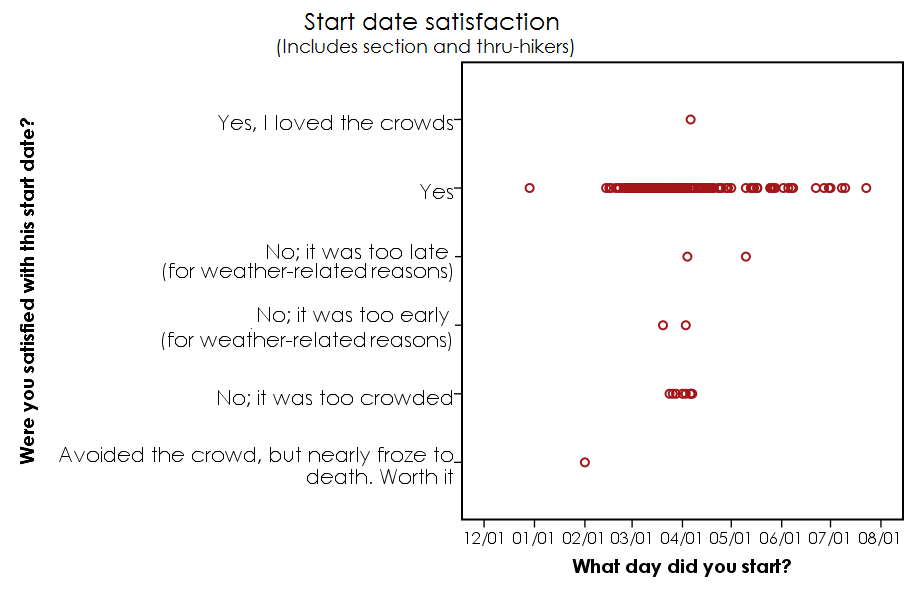 Hikers who started early and late still reported satisfaction with the day they set out. Six hikers who began during the northbound “bubble” said it was too crowded, but nearly all who started at this time were satisfied with this, and one specified they preferred hiking with the bubble.

Interestingly, some hikers considered the “bubble” start dates both too early and too late, for weather reasons. Certainly, northbound hikers who begin in March will typically encounter some snow, and those who take more than six months will often encounter snow towards the end of their hike as well.

The most common finish dates, for thru-hikers in our northbound-biased sample, were in mid-to-late August and throughout September. 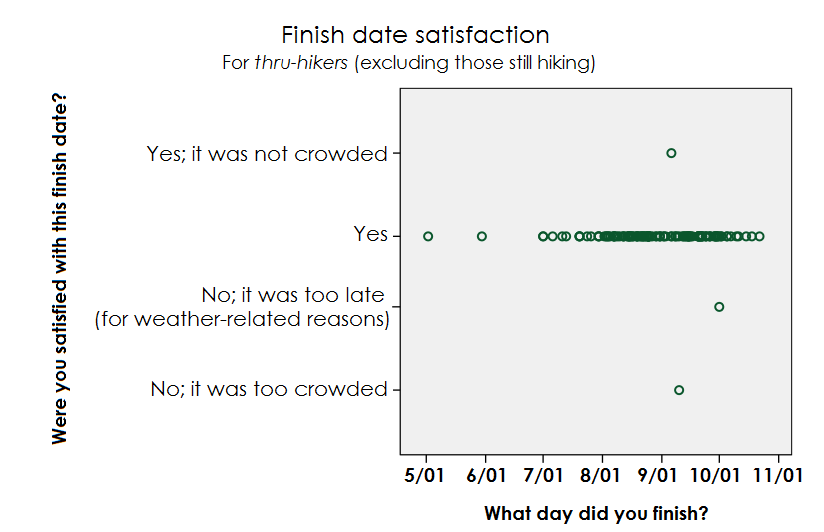 As with start dates, hikers were generally satisfied with the date they finished. The only hiker who found the trail too crowded on the finish date finished on a Saturday. 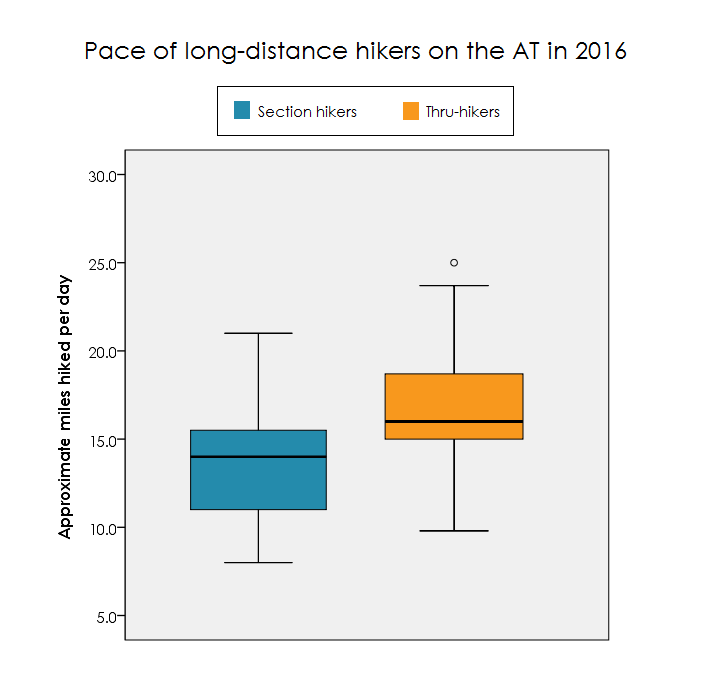 Sections of the Appalachian Trail

We asked hikers to rate sections of the Trail for both how much they liked them and how difficult they were. Hikers could rate more than one section as “favorite,” “least favorite,” “most difficult,” and “easiest.” The percentages shown below exclude hikers who said they did not hike that section. 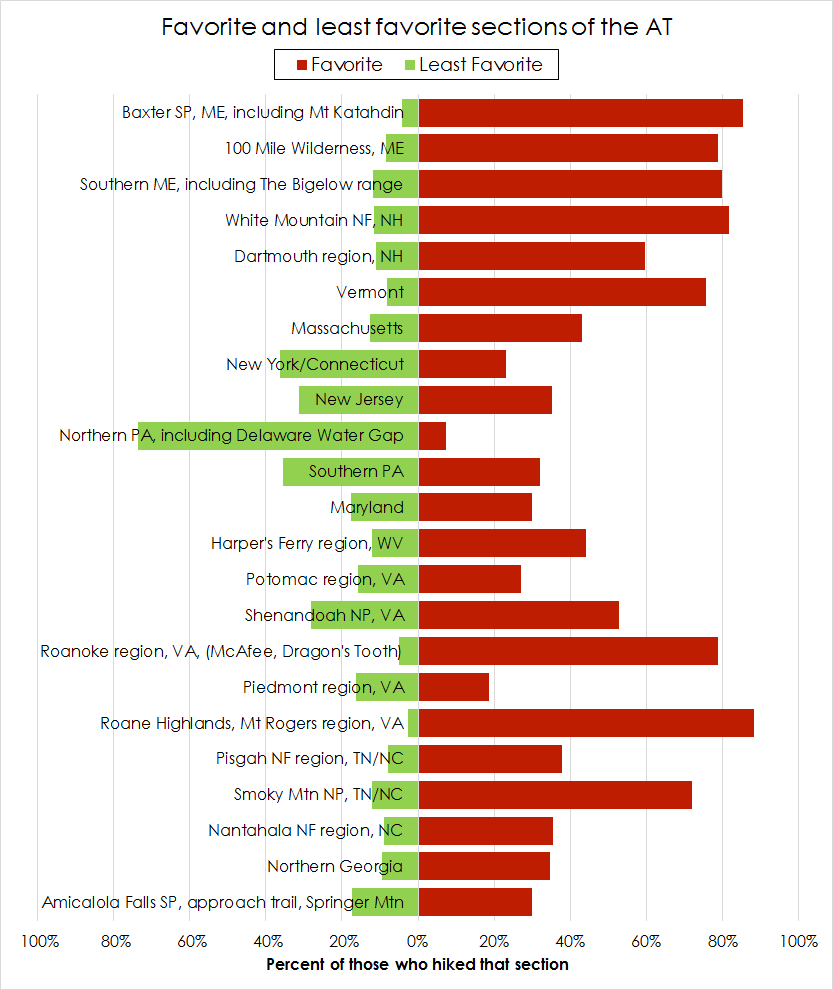 Northern Pennsylvania, known in the hiker community as “Rocksylvania” for its rocky terrain, was by far the least liked section. It was also commonly rated as difficult (see below).

The section most commonly picked as a favorite was the Mt Rogers/Roane Highlands area, which is home to wild ponies. Baxter State Park, home of the AT’s northern terminus, Mt Katahdin, was a close second, followed by the White Mountain National Forest, southern Maine, the 100-Mile Wilderness, the Roanoke region (which includes well-known McAfee Knob and Dragons’ Tooth peaks), Vermont, and the Great Smoky Mountains National Park. 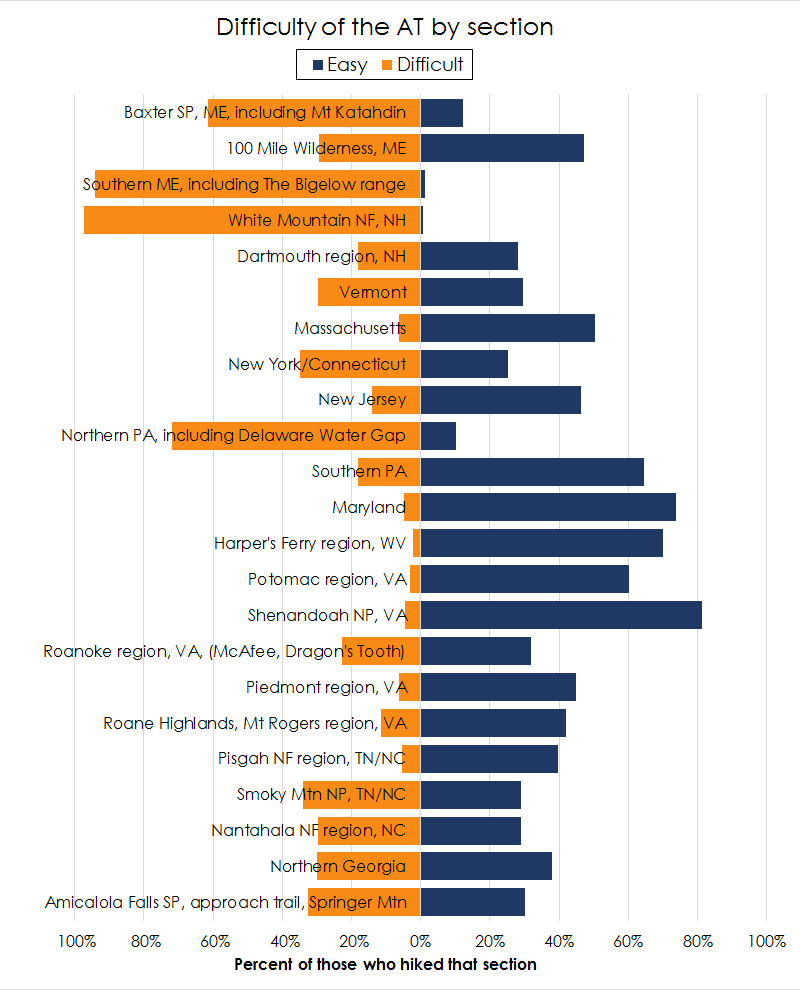 Easiest and Most Difficult Sections

As mentioned above, northern Pennsylvania was both widely disliked and frequently rated a most difficult section. However, the other most difficult sections of the Appalachian Trail were also among the favorites: The White Mountain National Forest, southern Maine, and Baxter State Park/Mt Katahdin.

The section rated easiest was Shenandoah National Park, which frequently crosses the Blue Ridge Parkway, such that it provides ample opportunities for “blue-blaze” road walking, “slack-packing,” and amenities (as well as frequent bear sightings). Other sections commonly considered easiest were Maryland (which features rolling hills and farmland), and the area around Harpers Ferry, West Virginia, which includes a flat walk alongside a canal and a historic town that is home of the Appalachian Trail Conservancy headquarters. 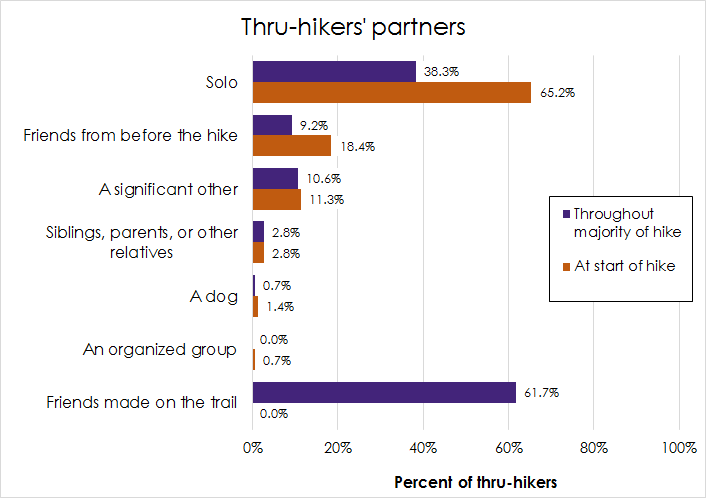 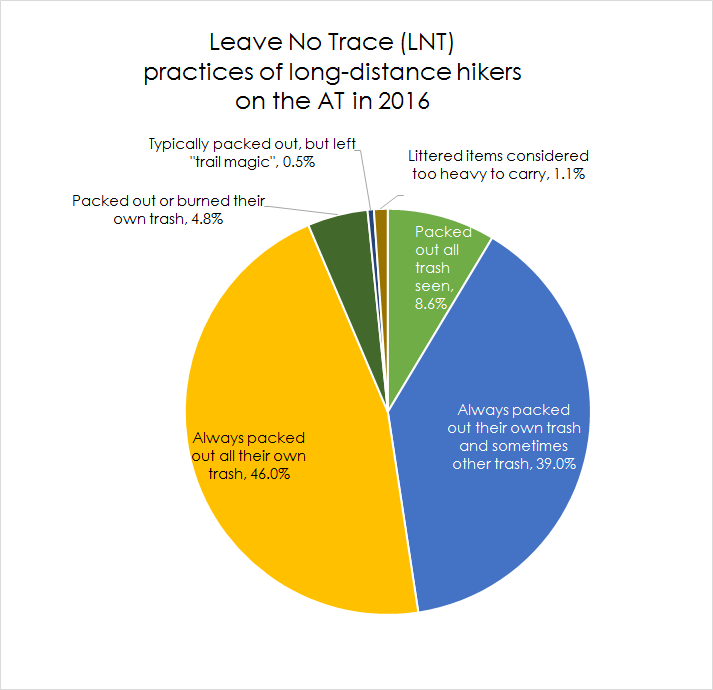 A few hikers (4.8%) either packed out or burned their trash. Burning trash is a controversial practice which I have sometimes seen recommended by trail clubs and park maintenance, but it is typically not considered best practice for outdoor ethics. 3 hikers in our survey admitted to leaving trash behind intentionally; two did so to shed weight and one did so as “trail magic.” If you are one of the well-meaning hikers who leaves trail magic unattended, especially if you hike on without returning to clean up the mess, please know that this is NOT a good deed. You are creating a hazard for local wildlife, who should be prioritized above providing assistance to humans in the area.

Additionally, I ran a correlation to see if there was any relationship between experience hiking and leave-no-trace practice. However, there was no relationship (r = -.052, p = .47).

We asked hikers in the survey how much the spent on gear for their hike, then how much they spent total (gear and expenses along the way). 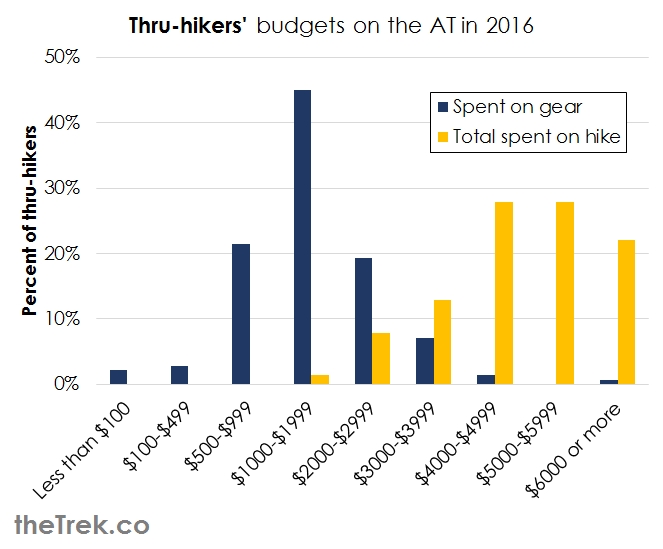 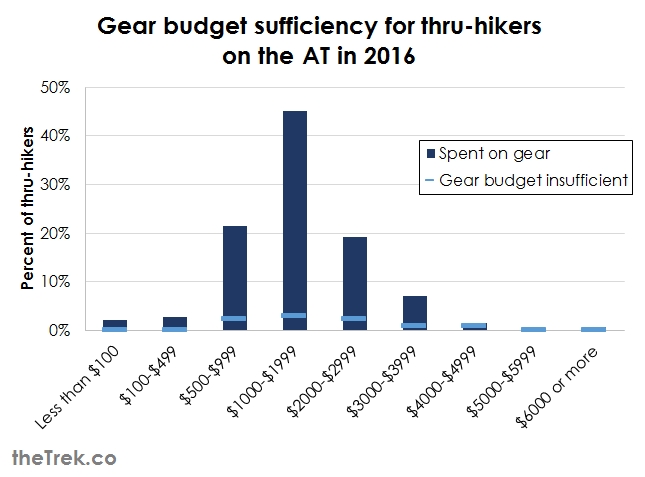 In the graph above, the light blue mark shows the percent of thru-hikers who said the amount they budgeted for gear was not enough. Note that a few people in the average range found their budgets insufficient, but those who had extremely small budgets didn’t report they needed more. 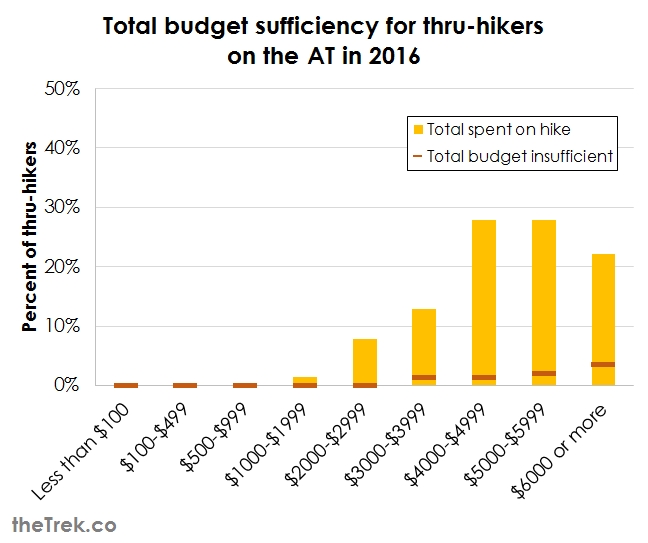 Interestingly, the only thru-hikers who found their total budget insufficient were those on the high end of the amount they could spend. This suggests that some individuals will want or need to spend much more than the rest, possibly because of expensive stops in town, although this could be due to illness, injury, or any other reason. 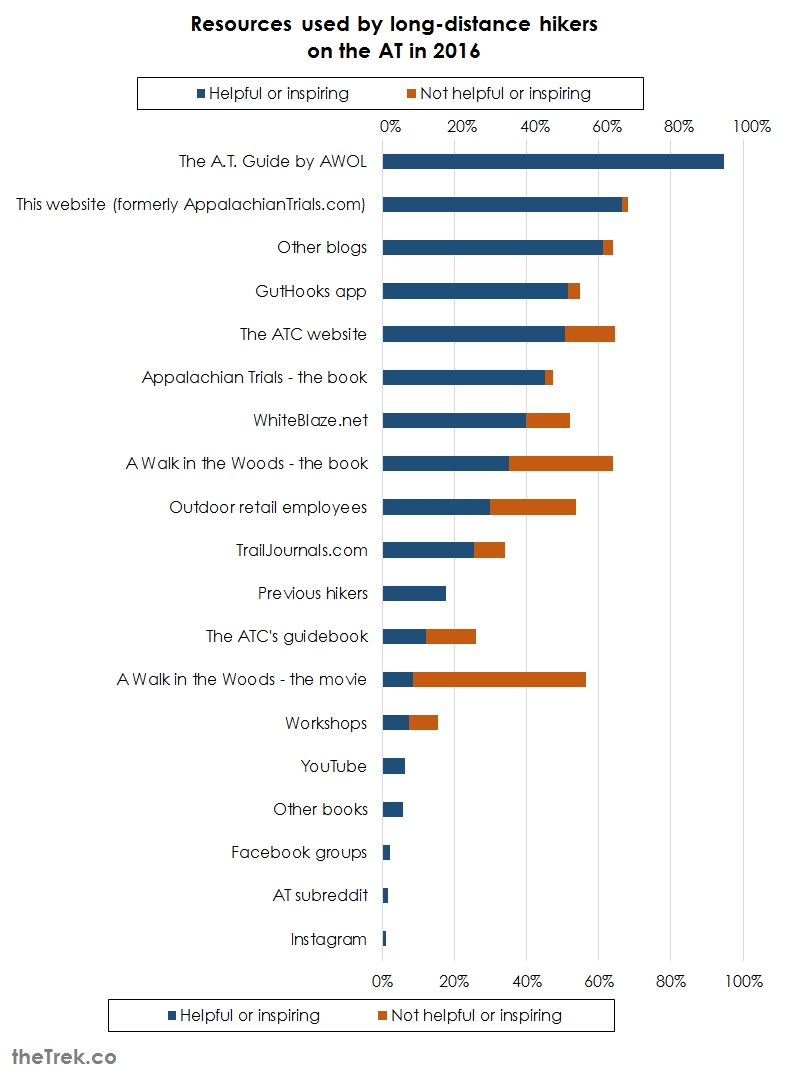 By far the most helpful (and perhaps inspiring) resource for long-distance hikers on the AT is The A.T. Guide by David “AWOL” Miller. This guidebook includes elevation profiles, maps of trail towns, hostel rates and contact information, locations of water sources, shelters, side trails, and just about every feature of the AT that hikers would want to know about. It also has additional information on access to the southern and northern terminuses. It should be noted that the ATC publishes a similar guidebook that 12 percent of hikers found helpful (14 percent did not like it).

Facebook groups, YouTube videos, and Instagram pages were all cited as helpful or inspiring. There are Facebook groups by class of thru-hikers (e.g., “Class of 2017”), a separate one for women, and one for the Appalachian Long Distance Hiking Association. These can be located with a simple search.

The only resources that were more often disliked than liked were A Walk in the Woods (the movie), the ATC’s guidebook, and workshops for preparing for a thru-hike. 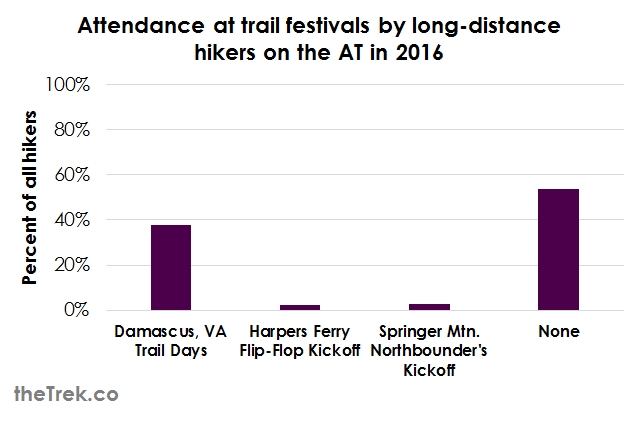 Almost 4 in 10 hikers in our survey attended Trail Days in Damascus, VA, but very few attended the kick-offs at Harpers Ferry or Spring Mountain. Most did not attend any of these. 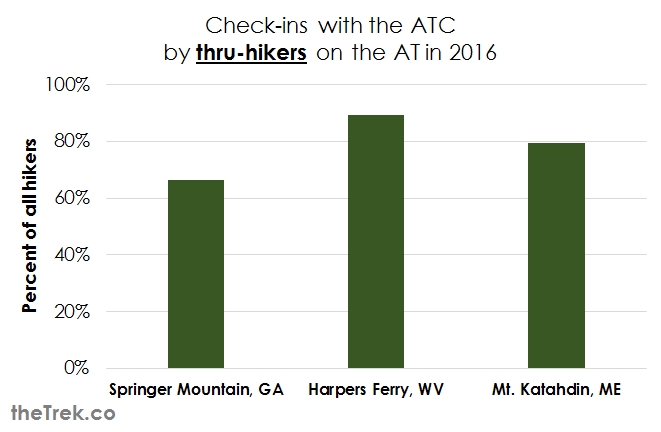 Regarding thru-hikers only, about 6 in 10 checked in at Springer Mountain, 9 in 10 checked in at Harpers Ferry, and about 8 in 10 checked in at Mount Katahdin. Checking in with the ATC helps them research surges in numbers of hikers and to prepare for future maintenance of the trail. It can be fun for hikers, too, because they will disclose the number of hikers who have passed through before you (for example, “you’re the 120th thru-hiker this year!”).

More “By the Numbers”

This is the first post on the hikers of 2016. Other posts from this survey are on backpacks, footwear, shelter systems, sleeping bags, stoves, food, and water, and sleeping pads.

CONGRATULATIONS and many thanks to all the hikers who took the survey! Best of luck to those who are still on the Trail. Thanks also to Zach Davis for spreading the word about the survey and for his input regarding its content.