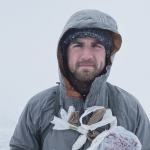 From the Woods to the Sea and Back Again

It was 4:02 a.m. and the room was dark except for the soft green glow of the phosphorescent life jacket sticker posted on the wall locker door in the corner. Inside the locker a loose bolt rhythmically clicked its way back and forth across the top shelf, thudding into the walls with each passing swell. The engines rumbled steadily four decks below, sending a slight vibration through the walls and a frigid air blew through the vents directly onto the bed where I lay, wide awake.

It was hours before my shift began. I tried in vain to drift back into unconsciousness but the more I focused on my need to get back to sleep the more I was awakened by it. I slid out of bed, pulled on a sweatshirt, and went downstairs to the galley for a cup of coffee.

Back in my room I unhooked the bungee cord that secured the chair to my desk in case of rough weather and opened my iPad. The blue light cut through the blackness of the room. I sipped from the mug and looked at the document already pulled up on the screen.

My world had been a whirlwind of perpetual motion and professional advancement since I graduated from Massachusetts Maritime Academy in June 2017. In the three years since school I had worked as an engineer in Alaska, Brazil, Florida, and the Gulf of Mexico. I had been on a yacht, a freighter, mud-boats, ROV boats, and one of the two Diving Support Vessels that operate in the United States. I had moved from Massachusetts to South Carolina, had a house, a long-term relationship, and a steady job working out of Louisiana.

From every external metric, I had “figured it out”; but internally it was an entirely different story. As my life became more routine, the fear of stagnation crept into my subconscious. There was a feeling that the most exciting days of my life were already behind me and I would stay steadily on the track toward suburbia, a place where I wasn’t necessarily afraid to end up, but never expected to be there so soon.

In late November, however, that all changed. My girlfriend of three and a half years expressed one day the same fears I was quietly harboring and we decided the best course of action was to take to our own paths. We split in the most amicable of ways, and I found myself on the other side with a blank slate and an opportunity to change the course of my life in any direction I wished.

I had long known the first step I would take. Slow nights in the control room with my coworkers always prompted discussions covering a myriad of topics; one of which was inevitably what we’d do if lives ever went sideways on us and we had to start over.

“Well, before anything else, I’d like to try and hike the Appalachian trail.”

My childhood had been spent in the woods with my family and my Scout troop. I had devoured books about the Appalachian Trail growing up and had a topographical map of the route posted on the wall of my bedroom. It was the first item on the first bucket list I ever made, before I could grasp what the “bucket” really was. But I had long fallen out of spending every weekend backpacking and aside from winter hikes in the White Mountains my time spent outdoors had drastically declined.

This love for being in the woods and every challenge that comes with it, something I long considered a defining aspect of my personality, had been relegated to the back burner in exchange for sports, studying, and being with friends. I can recall vividly when my best friend’s mother or another friend’s brother had taken to the trail themselves. I remember the excitement I had for them embarking on such an incredible and arduous journey, but simultaneously the rock of envy that settled in my stomach. The sudden weight of my inaction in the presence of someone who was striving toward that very goal I myself wished to accomplish. I would comfort myself with the same scripts that so many have told themselves before;  I was waiting for it to be the right time for this to change or that to happen, for a sign that this was the moment.

Now I had my sign, my life had officially gone “sideways” and there was no reason not to make a drastic change. I looked over my fledgling plan in the early morning darkness of my room, at the sprawling document that was part manifesto, part gear list. Every thought I had about the trail found its reprieve here. A list of gear I owned and a list of gear I needed. The expected cost breakdown. My schedule for work and the limited days I knew I’d have for shakedown trips.

The odds were decidedly not in my favor. I could feel those same scripts simmering in the back of my mind. My gear is too old. I won’t get enough prep time at home. There’s always next year. I contemplated them for a moment and accepted the truth that each one of my concerns held. It was true, I wouldn’t be the most prepared hiker to ever take to the trail. I wouldn’t be the lightest or fastest. I wouldn’t have the latest gear or most optimal packing system. There would be a fair amount of shooting from the hip in the foreseeable future, but none of that mattered.

This is my chance. This is my opportunity to hold my actions accountable for the words I’d said. To pursue that first item on that list, strike away from the conventional, and rediscover a part of myself left to become dormant and rigid through lack of use. Nothing is going to stop me from giving it my best shot. I will plan and prep as much as I could, and the rest, I’ll figure it out.

A mariner by trade with a deep love for photography, writing and being immersed in the great outdoors. Running on burnt coffee and the insatiable pursuit of adventure, I’m trading my seabag for a backpack and hiking NOBO on the AT starting in February 2021.