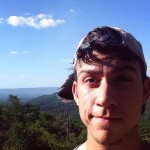 The First Few Days on the Appalachian Trail

The drive down involved a lot of sign games, Long John Silvers, 80’s music, and laughs. But finally getting here felt unreal! We found the service road that led to Springer Mountain, and after getting caught in a small thunder storm on the way up, and everybody doubting my directions, we finally got to the parking lot!

After pulling up a concerned mother who’s son was hiking alone swapped numbers with my dad, thinking that we’d be nice company for Wesley. Hadyn and me decided to do the .9 miles back to touch the top of Springer, but Wesley decided to press on from the parking lot. We haven’t seen him since, (sorry Wesley’s mom) but we joke that he’s already made it to Katahdin! We did meet Ohio and his sweet man-bun on the walk to Springer, though! Solid guy, that Ohio.

Signing into Springer, Hadyn decided on the trail name Pfeifer based on a camp he used to work at, and I went with Grey Wolf cause why not. After Springer we hiked about 8 miles, and camped out just before Hawk Mountain Shelter with Ohio. I went on a solo mission to find water about ten minutes up trial and made it back just in time for a failed fire attempt, but you can’t win em all! Pfeifer clocked out pretty early, so Ohio and me chatted over dinner before I attempted my first bear bag attempt. Eeesh!

Ohio, Pfiefer and me got packed up and on the trail around 9:30ish. It’s an odd thing to not have to rely on time that much out here. You walk as far as you want, you eat when you’re hungry, you camp when you’re tired! And repeat.

Anyways, we made it to Horse Gap for lunch and got our first dose of trail magic! Someone left a barely used bear canister filled with all sorts of snacks and goodies, which was a good pick-me-up before tackling Mt. Sassafrass!

After we met back up with Ohio at the bottom we found MORE trail magic, as in 6 gallons of much needed water. Heavenly. As we were taking a break we chatted with Shirley (Catson) from Orlando who was a 75 year old slack packer, who said that life was too short not to do things like this. Good for her!  As we were talking, the trail angel who left the water came back with Nature Valley bars and peanut butter crackers! JACKPOT!

My knees started to feel it after Sassafrass, but they’re hanging in there! Ohio pulled away from us for the day, so we decided to set up camp by a nice stream for the night.

Today was just Hadyn and me for the most part, and we got some serious ground covered! About 14 miles in total.

We stopped by Gooch Mountain Shelter and met an older man that had been hiking since about 5:30 am because he couldn’t sleep. YIKES! Turns out he’s a brain cancer survivor who decided to hike the trail. We call him Greybeard (we give everyone a name whether we tell them or not).

We also met a red bearded fellow, (I bet you can guess his trail name) struggling up Ramrock Mountain and tried to give him some encouragement.

After that we pressed on to Jerrard Gap and hunckered down from the first on trail storm we experienced! It was just a small one.

We’ve gotten into the habit of getting up later than our trail crowd, but pressing on further in the evenings. This morning Ohio and Ann passed us, but we caught up to them at Slaughter Creek just before Blood Mountain and officials got introduced to Ann, who lives up to the cool person we’ve been told she is!

Fun fact about Slaughter Creek/Blood Mountain: legend has it that they got their name from a bloody battle between the Creek and Cherokee tribes. Flash forward years later and you have me, a member of the Creek tribe, and Hadyn, a member of the Cherokees hiking up it together! Water under the bridge if you ask me.

Once we got down from Blood, we landed smack dab in Neel’s Gap, where I treated myself to a whole cheese pizza, a Hershey’s Cookies & Cream, and a Mr. Pibb!

We camped about 4 miles up on some mysterious mountain top we couldn’t quite track down on the map, but it ended up being one of favorite campsite’s so far!

Somehow we zoomed right by Swaim Gap, which we were counting on for water, so it turned out to be a dry morning. But we lucked right into more trail magic at Tesnatee Gap when Bill and Becky, a touring Alaskan couple pulled up and offered us a cold beer! Sure thing Bill!

After that we truged on to Low Gap where we met and chatted with Tiger Mike and Carl from Boston, Cankles , (self named) and Daniel, and Finch and Pony. We discovered that most of us were Game of Thrones fans, so wehad a nice geek out session.

The rest of the day was pretty flat, so we were able to get some miles in and camped out with Colorado close to Blue Mountain Shelter for what turned out to be a rainy night/morning.

Going down Blue Mountain while its misty and wet is no bueno (mmm… Taco Bueno)! But at any rate, when we finally got to Unicoi Gap we were brought right into more trail magic of burgers and hot dogs! Not to mention all sorts of deserts.

We were able to split a shuttle with Tiger Mike and Carl into Hiawassee. We patiently waited for Joyce in her Subaru Outback (NICE!) to pull up and pull us into town.

Hadyn and I checked into the Holiday Inn and I won the Rock, Paper, Scissors battle for first shower! Words don’t describe what that shower did for me. After we both dialed back our hiker funk we found a nice buffet with all sorts of Gone With the Wind posters and things (“we just like Gone With the Wind..”). I must’ve had me about 5 Mr. Pibbs. And now I sit finishing this blog about to hop into a real bed!

This is without doubt the hardest thing I’ll ever do, and I still appreciate all the prayers and support we’ve been getting! People take care of us hikers on the trail, and it’s filled with all sorts of great people! I’ll continue to blog all I can in every town we hit!

I'm a nearly 22 year old Oklahoma native, and I'm a full time recycle worker doing my part to save this beautiful blue dot we call Earth. But as of April 2015 I'll be a full time adventurer experiencing all the Appalachian Trail has to offer! Never ever been thru-hiking before, ain't that a pip? I decided to hike the AT after getting my Associate's Degree in basically an undecided major, and landing a great job that let me save up to do so. I'm hoping that all this time away from "normal" life will give me a chance to reflect and let me realize my calling! My trail name is Grey Wolf.