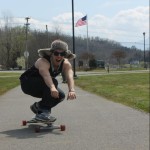 A Decade of Dreaming on The Appalachian Trail

This has been a long, long time coming.

You know that feeling you get when you’re so excited and have so much to say that you can neither do or say much of anything? I have been living in that feeling over the past several weeks. The phrase “I’m going to hike the AT one day” has been a part of my vernacular for so long that it began to lose it’s luster. It was always on the horizon, but something else important always was just a little bit closer, and so in order to maintain my sanity I relegated it to my calendar as “coming up” and left it as that while I worked on things that were more pressing.

That time is over. As I write this, the only thing between the trail and I is 28 days and one long car ride down to Georgia.

A Decade of Dreaming 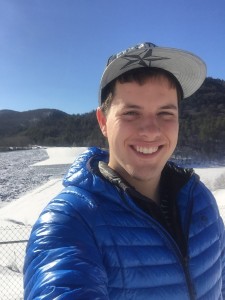 This is me. Sometimes I like to take pictures and see how much sun I can squint at.

If you’ve met me, there’s a pretty good chance that I talked your ear off about how I was planning on hiking the Appalachian Trail one day. You may have listened with genuine interest or feigned politeness, but either way you listened, and for that I thank you. It’s difficult to keep a dream alive when it’s so far away. The enthusiasm comes in waves – the initial excitement, the days spent dreaming up hypothetical logistics (I never thought I could get so excited planning imaginary mail drops), but as time passed those waves grew smaller and smaller. It’s just simply not easy to sustain a high level excitement and enthusiasm for something over a decade away. So I kept the dream alive by broadcasting it to other people – as friends and family began to associate the trail with my identity, it became somewhat ingrained in my own character to a point where it was no longer something I had to motivate myself to do. It was simply part of me, something that everyone knew (and still knows) that I was going to do one day. With 28 days remaining, my enthusiasm and excitement is real again. This is really happening.

I was first bit by the Thru-Hiking bug back in the summer of 2006. I was in the midst a week with the Boy Scouts of America in the Hundred Mile Wilderness, a relatively remote stretch of the trail that immediately precedes the final miles to Katahdin Springs campground and the northern terminus of the trail. We spent one of the final nights at the campground in the shadow of Katahdin, during which we were able to meet several Thru-Hikers (a group of Texans and several ministers) and hear a few of their tales from their journey north. To a barely 15 year old teenager this seemed beyond incredible. I had struggled with difficulty to complete the trek from Abol Bridge to the campground, and here I was speaking with hikers that had made their way from Georgia! That mid-August night was all I needed to get hooked, and from that point on my conviction to complete the trail was borderline obsessive. Like I said before – in order maintain interest in something that would be almost a decade away, you kind of need to be. 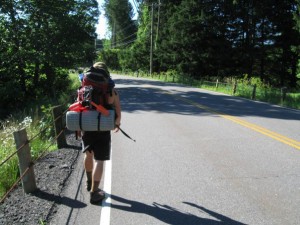 Spring 2010: During the college transfer phase I got to spend a of time backpacking – this is somewhere on the Connecticut AT

The trail somehow felt closer during the remaining three years of High School than it did in the years following my graduation. Maybe it had something to do with the relativity of the passage of time when one is younger, but the closer the trail got, the further away it seemed. After a fiasco of a freshman year (I transferred from Gettysburg College to Manchester Community College before finally ending up at the University of Connecticut) the trail was still on my mind, but it lost valuable brain real estate as I became busy with classes, marching band (The Pride of Connecticut, University of Connecticut Marching Band, TUP!), post-graduate aspirations, and everything else that came with the collegiate lifestyle. By the start of college I (thought) I had a plan – I was going to take the Law School Admission Test, apply to schools during the Fall of my senior year (2012-2013), and hike the trail between the time I graduated college and started law school.

When does anything ever go according to plan anyway? 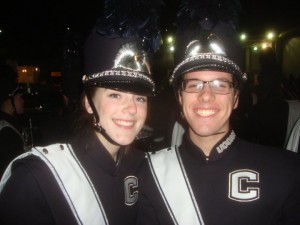 December 30th, 2010: Exhibition with the Pride of Connecticut, University of Connecticut Marching Band at the Fiesta Bowl in Arizona. What a crazy week.

Everything fell to pieces the minute I got my first LSAT score back. It was awful. There was no way I was going to law school in the upcoming fall with that score, and immediately I knew that meant that I wasn’t going to be hiking the Appalachian Trail that spring either.

Like I said before: There was always something closer on the horizon.

I put law school and the Appalachian Trail on hold and started applying for jobs in the final semester of my undergraduate studies. I ended up working a difficult but rewarding job in Somerville, MA (right outside of Boston) as a field chemist for an hazardous waste environment services firm. For a while I lost sight of law school and the AT – a comfortable salary and the potential for quick advancement sure can be tempting when you’re a 22 year old young professional with little to no financial or personal responsibilities and obligations. About halfway through my tenure there I took the LSAT, again, and performed exceedingly mediocre, again. Despite this, the wheels were already in motion for the next phase. The trail crept ever closer.

The Closer it Came, the Further it Seemed 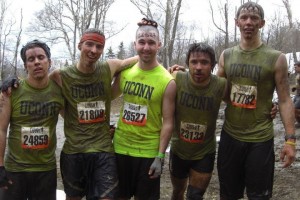 Spring 2011: The first of the three Tough Mudders I’ve done so far.

I moved home after about 15 months of living in Boston to ensure that my two dreams would be realized – attending law school to become an environmental attorney, and hiking the AT. That’s when the phenomena of relativity really kicked in – the closer the trail seemed, the further away it felt. I was so busy studying for a third LSAT  and applying to schools that I stopped reading all of my AT blogs, stopped watching all of the YouTube channels of hikers that I had stayed up late watching when I was younger, all so that I could focus on applying and getting into law school. As that concluded (with a fourth and final LSAT in December 2014 – thank God this one went well) I came to the realization that I wrote at the beginning of all this: there is no more horizon to look to, no more obstacles or commitments standing between myself and the trail. It’s almost here.

Let’s do this thing 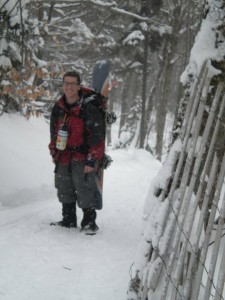 Winter 2011: Hike up/board down Mt. Greylock. Things like this kept me patient while I awaited the trail.

That leads us back up to this moment, where I sit comfortably in clean clothes and warm moccasins, drinking fresh pressed coffee while I blog about the lifestyle I am about to undertake that will include none of these luxuries (well, maybe the coffee). I originally wanted to do this blog to inspire other hikers for whom the trail is a far off opportunity. The wait is real, and it can be challenging. I couldn’t name all of the blogs and videos I’ve watched over the years, but I can tell you that each and every one helped keep me dreaming when times were tough. There were times when the trail seemed like an eternity away, but a simple article or video was enough to connect me right back to the trail, and to keep that dream alive. I hope that some of you out there can find a similar happiness in following my adventures.

Aside from the aforementioned reason, I will be writing for friends and family to follow and track my hike. It sure beats sending frantic texts every time I get into town, although I’m sure that will happen too. I am writing because I want my parents to know that I will be safe, happy, and having a great time. I am writing because I want my girlfriend Amanda to know that I love her, and that she REALLY does not have anything to worry about while I’m out there (seriously, I promise I’ll be fine).

Lastly – and perhaps most importantly – I am doing this for posterity, and for myself. The phrase “once in a lifetime” doesn’t even come close to capturing what this will be like. The next six months are going to be incredible, beautiful, exhausting, exhilarating, trying, and downright depressing at times. Although it’s not a lifestyle I can sustain forever – though I’m sure I’ll wish I could at times – documenting those experiences here will create a connection to this time in my life that I will have forever.