Once I crossed into New Jersey, I had four days to hike hard and put in good miles before my friends Kim and Jacob came to pick me up in Unionville, New York and pamper me in a hotel for a weekend.  We ate good food and went swimming and walked to the highest point in New Jersey together before we had to part ways again. 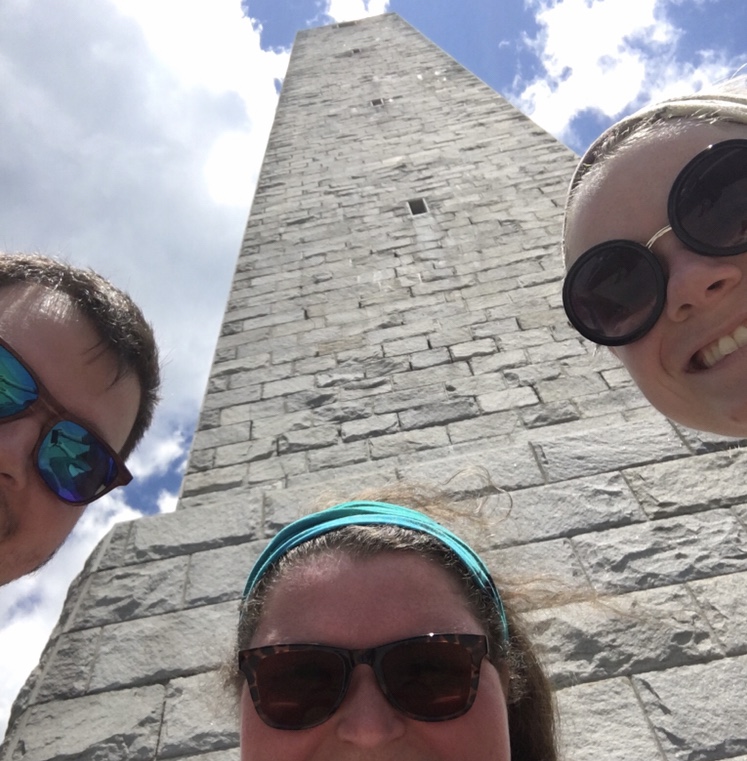 I didn’t expect to, but I totally broke down and sobbed when they dropped me off, and spent a good portion of that day feeling low, constantly on the verge of tears.  I kept running into a girl named Poker Face who had rolled her ankle and was “taking it slow” aka going my speed.  The particular section of the trail we were on was buzzing with news about a hot dog stand up ahead, as well as an ice cream place with fresh produce.  Additionally, the more people I talked to, the more buzz there was about a drive-in theater that let hikers camp for free and watch the movies.  It was a two mile hitch into Warwick, NY to get to the drive-in.

Poker Face and I ended up at the hot dog stand together and we made a plan to stick together the rest of the day and get to the road where we could hitch to the drive-in as a team instead of alone.  We had plenty to talk about during our five mile walk together, and once we got our hitch, we were thankful to be together as the guy giving us a ride got more and more questionable the longer we were in his truck.

Thankfully it all turned out okay and he dropped us off at the drive-in where there were about a dozen other hikers camped out on the hill overlooking the three movie screens.  I was excited to snag two trees that I could hang my hammock between, even though it wasn’t a great hang, it was good enough for the night.  Everyone settled in for the double feature of Toy Story 4 and Aladdin.  We ate to our hearts content and slowly everyone started settling away in their tents for the night until just me and a guy named Buttah were the only ones awake.  He majored in Jazz Guitar and Music Business, and was from New York.  We poked fun at Aladdin and chatted from time to time when the movie got slow.  After midnight, a man that worked at the drive-in brought all the leftover food from the concession stand to us. We couldn’t stop laughing about the fact that we were the only two awake and we were already so full from eating all night.  We didn’t go to bed until after 2am. 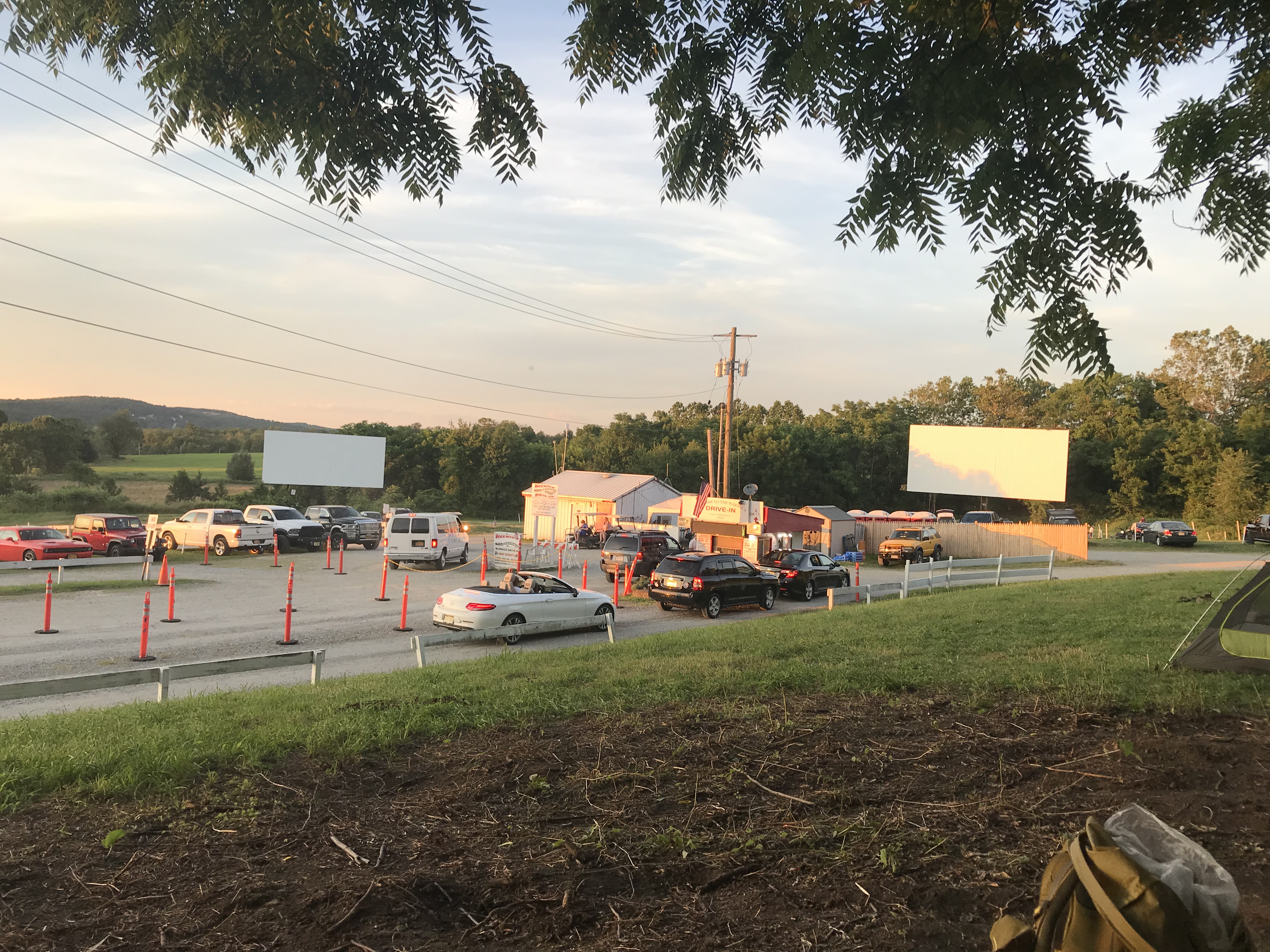 The Warwick Drive-In Theather – an AT highlight for sure!

The next morning I was able to snag an Uber back to the trail, and Buttah and Snack Pack rode with me.  I let them walk ahead of me and took my time, but eventually Buttah showed up behind me, saying he had tucked away somewhere to try to take a nap because he wasn’t feeling well from staying up so late the night before.   I was my regular amount of exhausted.  We were together when we crossed the New Jersey/New York state line, and we ended up hiking together the rest of the day.  We took all our breaks together, and he never made me feel rushed.  He kept commenting that we were having a “chill” day, not realizing that his chill was my regular, full-throttle pace. 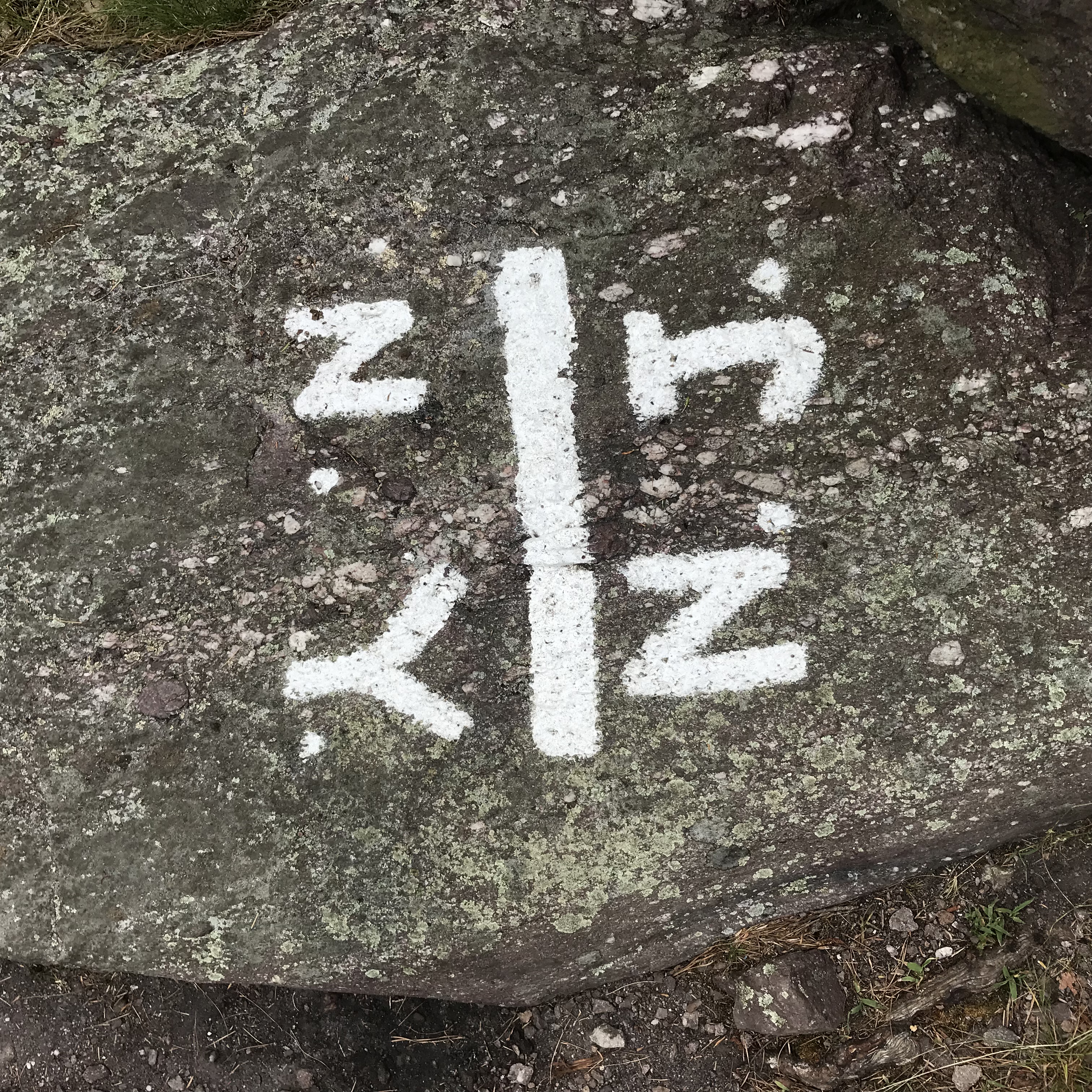 Most the day we kept talking about how much longer until we got to the next promised hot dog stand.  At one point we cheered that we were only 3.9 miles away.  After what felt like forever, we passed some other guys and asked how close we were now.  “Three miles,” they told us.  “We’ve only gone point nine?!” I whined.  It was a long hot day.  And we were devastated when we finally got to the hot dog stand and discovered it was boarded up and closed.  No hot dogs for us that day.

At this point, everyone was buzzing about making it to the summit of Bear Mountain, NY to have a great view of fireworks for the 4th of July.  We were all right on track to get there on time.  The next morning, Buttah went ahead of me, and I had my first really hard day of actually going up and down mountains all day.  I was supposed to go 19.1 miles to a shelter to meet Buttah, but I only managed to get to the shelter 14.7 miles in right before it started to get dark.

The next day was the 4th, and everyone at the shelter said they were going to Bear Mountain for the fireworks.  There wasn’t supposed to be any camping up there, but we all agreed we could find somewhere discreet to sleep after the fireworks, and we would all be together so it would be okay.  I didn’t feel great about it, but thought I needed to calm down and let myself have a little fun.  I had another hard day, my climbing muscles already exhausted from the day before.  I was deeply tired, not feeling well, moving painfully slow, and honestly starting to wonder if it really was just the heat or was I getting sick? Was this the exhaustion that came with Lyme Disease that everyone had been describing?

I decided I didn’t have it in me to climb anymore, and I was going to bail and stay at the shelter before the Bear Mountain climb.  I passed some hikers going South who were looking for the same shelter I was looking for, which meant one of us had passed it.  We all pulled out our phones and concluded that it was me who had somehow missed the turn off, and had overshot it by a good mile, mile and a half.  Instead of getting defeated, I took it as a sign that I was supposed to make it to Bear Mountain.  And so I pushed on, as my only two options ever are to go forward or go backward.

I made it there, completely depleted and chafing to the point of bleeding just as the sky was getting beautiful with sunset colors.  A stranger gave me some pizza and a coconut water and informed me that he was surprised I was the only hiker there.  My heart sank.  I was the only hiker?! There were supposed to be at least five others there already.  I painfully took off down the mountain, panicking because it would be getting dark soon and there was nowhere to camp.  I never should have planned to end up somewhere I wasn’t supposed to camp!

Once at the base of the mountain at the Bear Mountain Inn, I called several hotels until I found one with a last minute opening at 8:00 pm on the 4th of July.  Then with an emotional lump in my throat, I tried to get an Uber with no luck, so I downloaded the app Lyft and at last got myself to my hotel.  I was a wreck from it all.  My whole body hurt, but especially my feet, ankles, and chafed areas.  I slept almost the whole entire next day.  The morning after that, I still didn’t feel like going back to the trail, so I extended my stay to a third night.  Worried about the daily ticks I had been pulling off myself, I paid $75.00 for an Uber to and from Walmart to get permetherine to treat all my gear.

This morning I cried when I woke up because I still didn’t want to go back to the trail, but I felt so much guilt at the fact that the whole situation cost me over $500 between my Uber rides, hotel room, and food deliveries.

It was hard to pack my things and leave the comfort and safety of my little hotel oasis, but I did it.  I’m back out on trail now, emotional but hanging in there.