A crucial U.S Fish and Wildlife permit needed to complete construction of the Mountain Vally Pipeline (MVP) has been invalidated by the U.S Court of Appeals for the Fourth Circuit in Richmond, VA. The court cited the Endangered Species Act, claiming that the pipeline failed to adequately consider the effects of construction on the Roanoke logperch and candy darter, two endangered species of fish.

This comes on the heels of a rejection of the U.S Forest Service and Bureau of Land Management (BLM) permits last week due to concerns about erosion. These are only the latest legal challenge to the controversial pipeline, which has faced fierce opposition since its announcement in 2015.

Overview of the Mountain Valley Pipeline

The Mountain Valley Pipeline is a 303-mile natural gas pipeline under construction that traverses Virginia and West Virginia. The 42-inch diameter pipe is slated to travel through numerous protected habitats and difficult terrain.

Opponents say the MVP is larger and potentially more dangerous and disruptive than the other pipelines and power lines that intersect the trail. To put its size in perspective, “most major interstate pipelines are between 24 and 36 inches in diameter” according to naturalgas.org.

Its path takes it through Jefferson National Forest, running parallel to the Appalachian Trail for miles and intersecting it under Peters Mountain. The steep slopes of Appalachia raise fears that such a large pipe will cause erosion, landslides, and other environmental impacts. Currently, MVP claims it is 94% complete, though this claim may be misleading. Because it is an interstate pipeline, it is regulated by the Federal Energy Regulatory Commission (FERC). 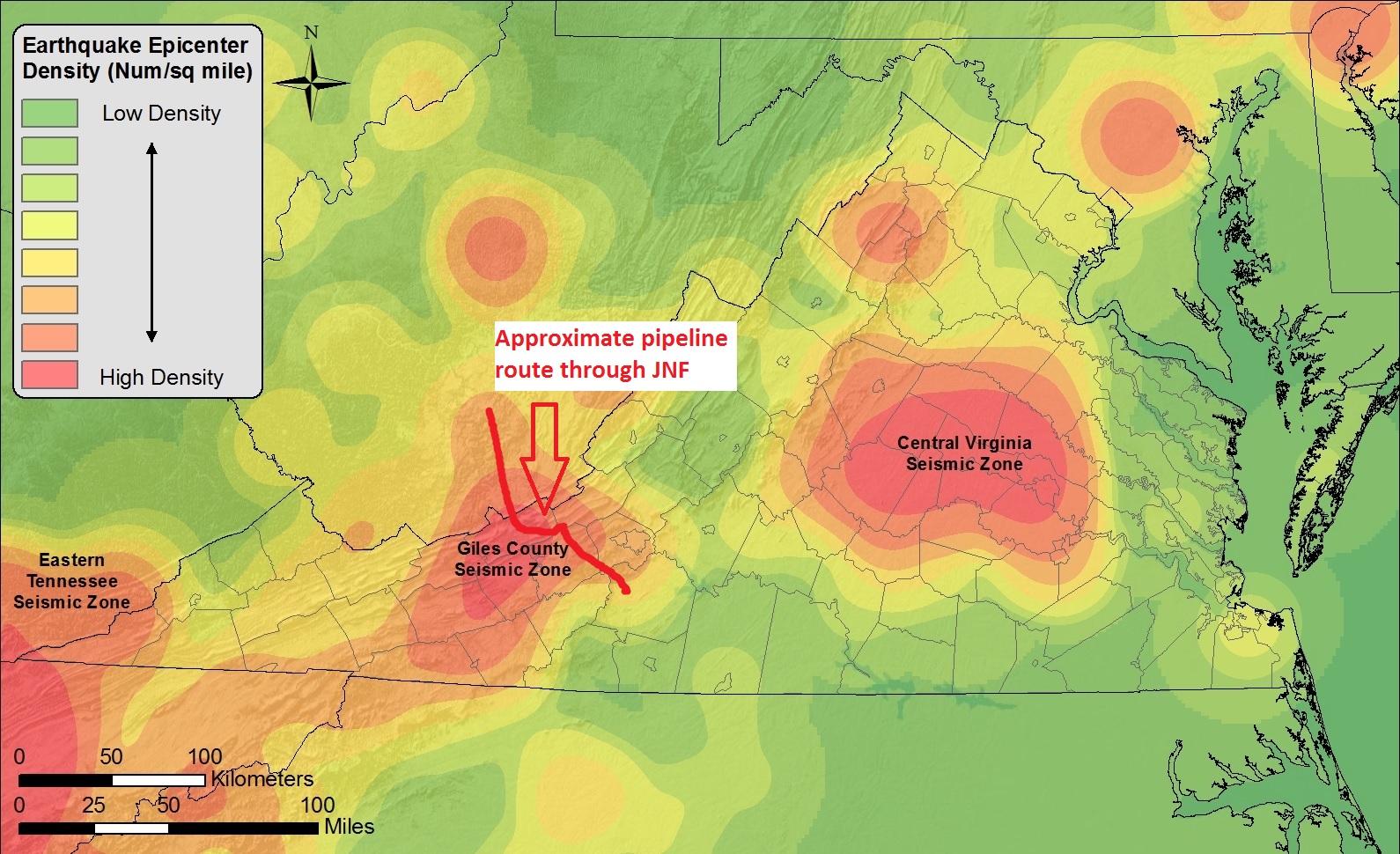 Opposition to the Mountain Valley Pipeline

Numerous groups have opposed the MVP since its inception in 2015, ranging from individuals and local grassroots organizations to national advocacy groups and Indigenous tribes. Concerns include environmental impact and potential disturbance to Indigenous burial mounds.

Organizations such as Appalachian Voices, the Sierra Club, Protect our Water, Heritage, Rights, Wild Virginia, and the Center for Biological Diversity have been challenging the MVP’s permits in court, arguing that environmental impacts were not adequately considered. So far, the Fourth Circuit Court of Appeals has overturned at least five permits due to the advocacy of these groups.

The MVP is currently 94% complete. The missing section is where it would intersect the AT. Image from Mountain Valley Pipeline.

The pipeline is currently expected to cross the AT 110 feet below the surface for about 600 feet. Opponents say it threatens forests and watersheds and could impact scenery on nearly 100 miles of trail. The presence of a natural gas pipeline so close to trail could also put hikers at risk due to the volatile nature of natural gas.

The Appalachian Trail Conservancy initially opposed the pipeline due to its impact on the trail. The ATC also feared it would invite other large, disruptive industrial projects, setting a precedent for trail/infrastructure relations that could impact all National Scenic Trails.

In August 2020 the ATC changed tactics. The ATC and MVP entered into a voluntary stewardship agreement, where the ATC was awarded $19.5 million for trail conservation. The ATC has already received half of this amount, while the other half is contingent on completion of the pipeline. As Andrew Downs, senior ATC regional director for the South, told The Trek in February 2021: “…the AT will bear some impact from the pipeline and we can’t stop it… If all we are going to get is nothing, let’s get the best deal we can.” Since then, funds from this agreement have been used “to protect over 1000 acres in the immediate viewshed of McAfee Knob,” said Downs in a phone call.

The full text of the agreement has not been released. The ATC fears making the agreement public would hurt its credibility in future negotiations. Opponents argue that keeping the agreement secret is harmful to ATC’s relationship with the public. They also object to the ATC entering into negotiations secretly, while maintaining an appearance of opposition to the pipeline. 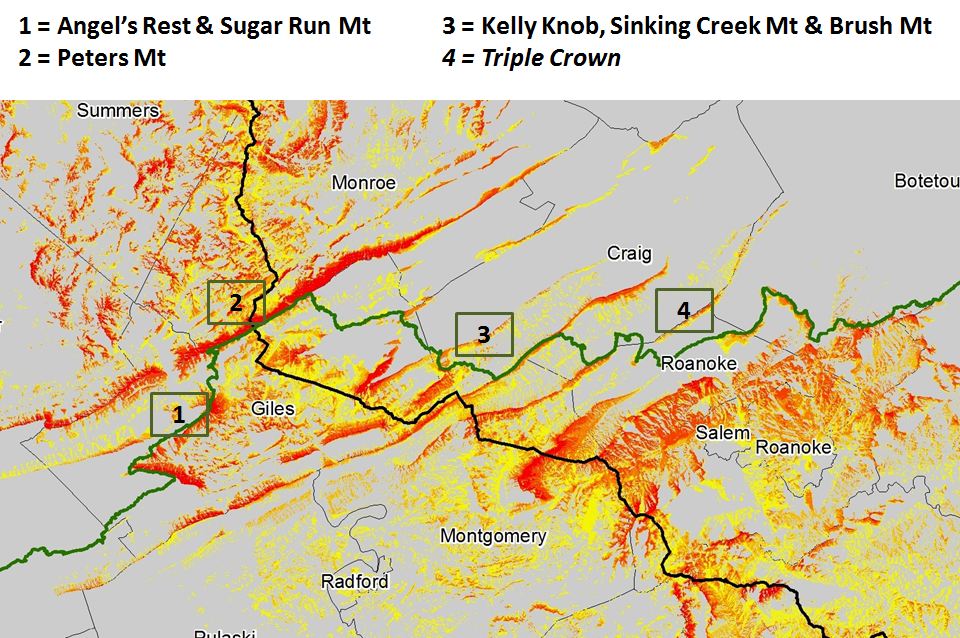 Timeline of some Major Events

October 2015: MVP files for approval with Federal Energy Regulatory Commission (FERC). It planned to complete the project in 2018, at a cost of $3.7 billion. It receives permission in 2017.

July 2018: 4th Circuit rescinds permission to build in Jefferson National Forest, on grounds unrelated to the AT. They specifically called analysis for impacts to the AT “adequate.”

August 2020: ATC enters into “voluntary stewardship agreement” with MVP. Meanwhile, as reported in Virginia Mercury, “the North Carolina Department of Environmental Quality denied the project’s 401 Water Quality Certification application, partly due to ‘uncertainty surrounding the completion of the MVP Mainline project.'” Simultaneously, a construction company working on the pipeline sues MVP for $103.8 million for withheld payments and tries to negotiate the sale of the pipeline to meet its debts.

September 2020: U.S Fish and Wildlife permit reinstated. U.S Corps of Engineers reinstates permits that had been invalidated in 2018.

March 2021: The last Yellow Finch Tree Sitters are removed by law enforcement from the path of the MVP.

May 2021: Completion date delayed to summer 2022, cost raised to $6.2 billion due to difficulty receiving approval for proposed water crossings.

Featured image: Simulation of the impact of the MVP on AT viewshed. Graphic courtesy of Appalachian Trail Conservancy. “Since these simulations were developed, ATC has negotiated additional corridor treatments that will further minimize visibility” says Andrew Downs.