My Life on the Trail or How Did I End Up on the Brink of the Adventure of a Lifetime? 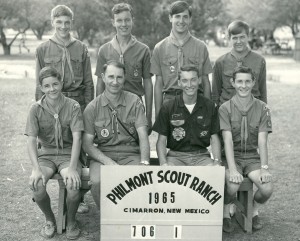 That’s me on the back row farthest to the right.  My group hiked 90 miles in about eight days.  It wasn’t a perfect trip.  At the time I hated oatmeal with the heat of a thousand suns and ended up skipping breakfast about half the time…not a good recipe for a great backpacking trip.  I ended up losing over forty pounds.  Weight I didn’t gain back until college.  I was hooked.  At that point in my life I didn’t really know a lot about what I wanted to do, but whatever it was backpacking was going to be a part of it.  But there was school and if I wanted to have disposable income, I needed to work during the summer.  Backpacking remained something I wanted to do, rather than something I actually did.  I graduated from the University of North Texas in 1976 with a degree in Education.  If you are doing the math, that was a little late.  Let’s just say that my senior year was three of the best years of my life.

I got a job teaching science in Ft Stockton, Texas and was able to regularly hike in the Guadalupe Mountains.  During the summer, I went to visit one of my college buddies in Lake Tahoe and after staying with him for a week to get used to the altitude, I hiked from Yosemite to the Sonora Pass.  This was my first solo trip longer than a couple of days.  While Tuolumne Meadows was teeming with people, after the first day on the trail I was pretty much the only man on the surface of the earth.  On the third night I was awaken my a bear clawing at the tree where I had hung my food.  I was in my tent and it occurred to me that a hiker in a tent was a lot like a burrito to a bear.  After a while the bear gave up and moved on.  I was a little freaked out by this encounter and ended up walking 20 miles a day for three straight days until I got to my car.  I stopped and ate dinner at dusk and then walked into the night.  When I got sleepy, I cowboy camped and was treated to in incredible night sky in the Sierras.   I returned to the Sierras every summer until I got married.  My favorite trip was from Mt. Whitney to Red Meadows.  I carried as many as three weeks of food.  With that much food in my pack, I didn’t carry much else.  My tent definitely stayed home.  If it rained I made a shelter with my poncho.  I loved those hikes.  Above  the tree line you can see eight miles.  During the course of a day, I could walk as far as I could see twice.  I noticed that after eight days, I walked with the full understanding that this was what I was designed to do.  All of us were designed to hoist packs and walk great distances.  We extended our range to the ends of the earth on foot.  Living in the city, our bodies forget, but given the opportunity, it remembers.  It is a shame that most people don’t know this at all and given how they live their lives they probably never will.

I first heard of the Appalachian Trail when I was in college.  I wanted to do it immediately, but just didn’t have the opportunity.  School, summer job…  I could never figure out a way to pull it off then.  As a young teacher, I was tied to the school year.  While I could probably have hiked it over two summers, that really wasn’t what I wanted to do.  It was the whole thing or nothing.  I got married.  Had a couple of fantastic children.  Backpacking was something I rarely got to do and certainly nothing close to the scale of my trips to California for several years.  One summer, I walked from Lake City to Wolf Creek Pass in Colorado on a trail that follows the Continental Divide.  I ended up being a couple of days late.  My wife was on the verge of calling the rangers and planning my memorial service.   In 1996 we moved to Brooklyn, New York.  I started taking section hikes in Virginia regularly…sometimes alone and sometimes with my son, Zeke.  Zeke ended up going to Dartmouth so we decided to walk to school his freshman year.  We took a train to Rutland and walked to campus.  Another summer I hiked about two thirds of the Long Trail in Vermont and truly learned the meaning of pointless up and downs.  I’ve hiked through the Shenandoah dozens of times. I’ve regularly taken two and three week trips for the last 20 years.  One things is different though, I no longer feel as connected to the trail as I did in my twenties.  It is always work, but at least it remains a labor of love.  A couple of times it looked like I might be able to take a sabbatical and take my thru hike, but life kept getting the way.  Now I’m retired and nothing can stop me.  Can my body still remember what is was designed to do?  How long will it take?

So here is the plan.  My projected starting date in March 20th.  When I checked that date at the Appalachian Trail Conservancy’s voluntary registration form ( https://www.appalachiantrail.org/home/explore-the-trail/thru-hiking/voluntary-thru-hiker-registration), I found that literally legions of folks planned to start at Springer round that time.  Given that, I  decided to do a flip flop starting in Marion, Virginia, going north to Katahdin, then coming back to Marion and hiking south to Springer.  This plan has a number of advantages.  1) I’ve hiked most of Virginia.  I can get the old stuff out of the way and go onto the new.  2)  Starting further north will allow me to get to Katahdin with the faster North bounders and get to Springer with the faster South bounders.  3) This arrangement puts the hardest part of the trail in the last third.  This might be an important consideration for a geezer.  I would highly recommend that all potential thru hikers check their proposed starting date at the ATC’s website.  While you don’t have to change your plans at all, you will be able to get a clearer picture of what your first days on the trail may look like.  Do any of us picture settling down at the shelter at the end of our first day with forty other hikers?

Next week I will include my first homework assignment from Zach’s book!