Here at The Trek, we’re no strangers to the backcountry tradition of being aggressively and mortally afraid of various wildlife. You name it, chances are one of us has nursed an irrational fear of it at some point: bears, boars, ticks, mosquitoes, spiders (guilty as charged), and, of course, snakes.

Just how dangerous are the AT’s noodles, anyway? The answer, as usual, is that it depends. There are only two species of venomous snakes you need to worry about on the white blazes: timber rattlesnakes and copperheads. In this post, we’ll talk about both of those species, as well as a variety of other common, nonvenomous snakes you may encounter on the trail between Georgia and Maine.

Warning! Snake pictures ahead. If snakes give you the heebie-jeebies, consider yourself warned.

The Two Venomous Snakes You’ll Encounter on the Appalachian Trail 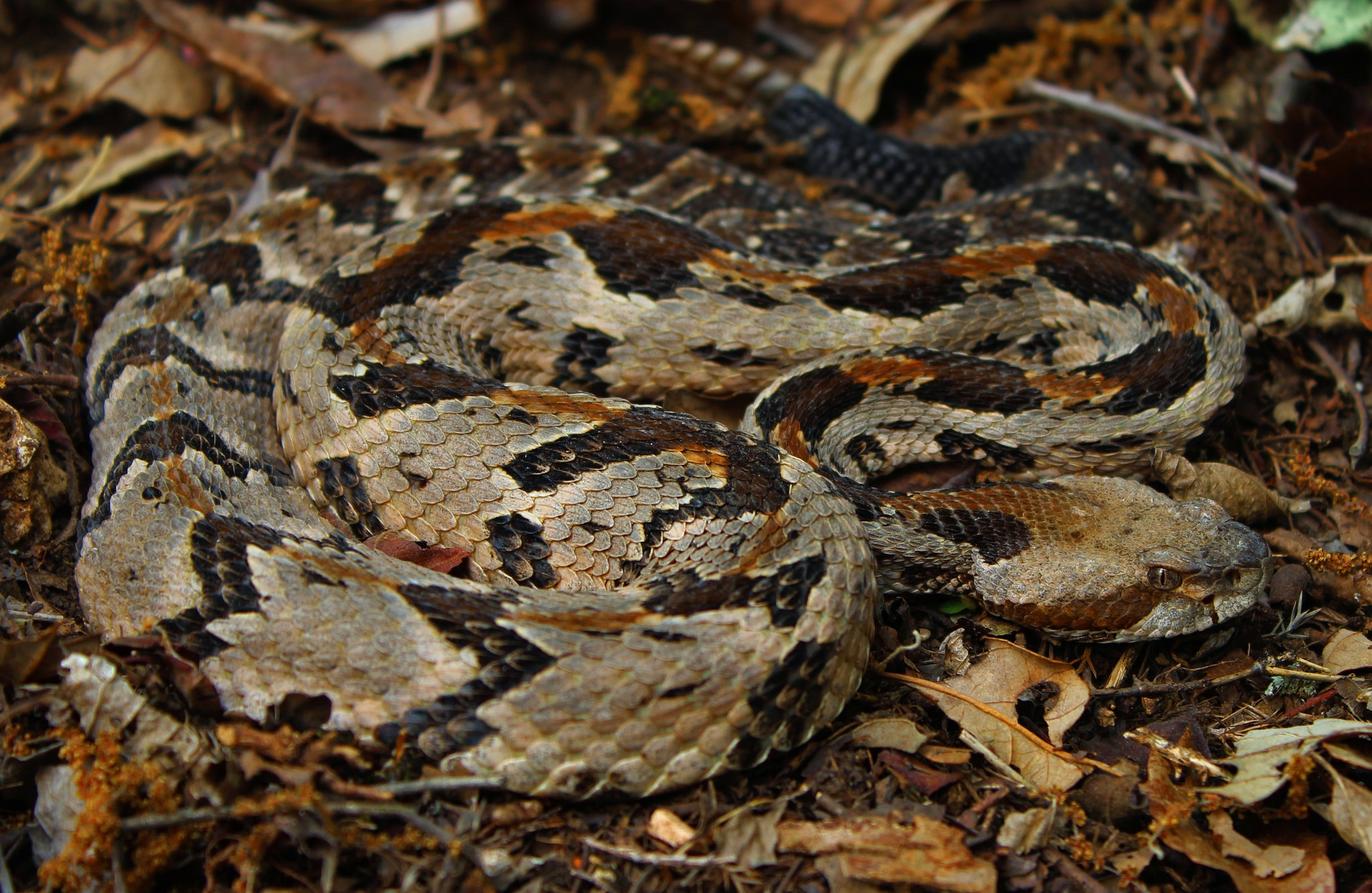 Range: Most of the eastern US; present in every AT state except Maine; prefer deciduous forest habitats
Description: Typically 30-60 inches in length; color varies from pinkish to nearly black; most have rows of zigzag blotches along their backs; triangular head that’s noticeably larger than neck; rattle tail

The timber rattler is the only member of the rattlesnake genus you’ll encounter on the AT. It’s the third-largest venomous snake in the US, and its venom is extremely potent: enough that a bite from a timber rattlesnake is considered a medical emergency.

That being said, this snake is also the most docile of all rattlesnakes, so bites are very rare. If you encounter one and it’s rattling at you, take the hint and back off. The rattle is its way of warning you off, not challenging you to an epic showdown.

Moreover, adult rattlesnakes can control how much venom they release with their bite, and they’re typically not keen on wasting all their venom on a non-dinner item like you, so even if you are bitten it’s not necessarily going to be deadly. All this to say that, yes, you should absolutely take rattlesnakes seriously and treat them with respect, but you don’t need to lie awake in terror of them each night.

Timber rattlers are more active during the day in spring and fall, while during the heat of summer, they are primarily nocturnal. 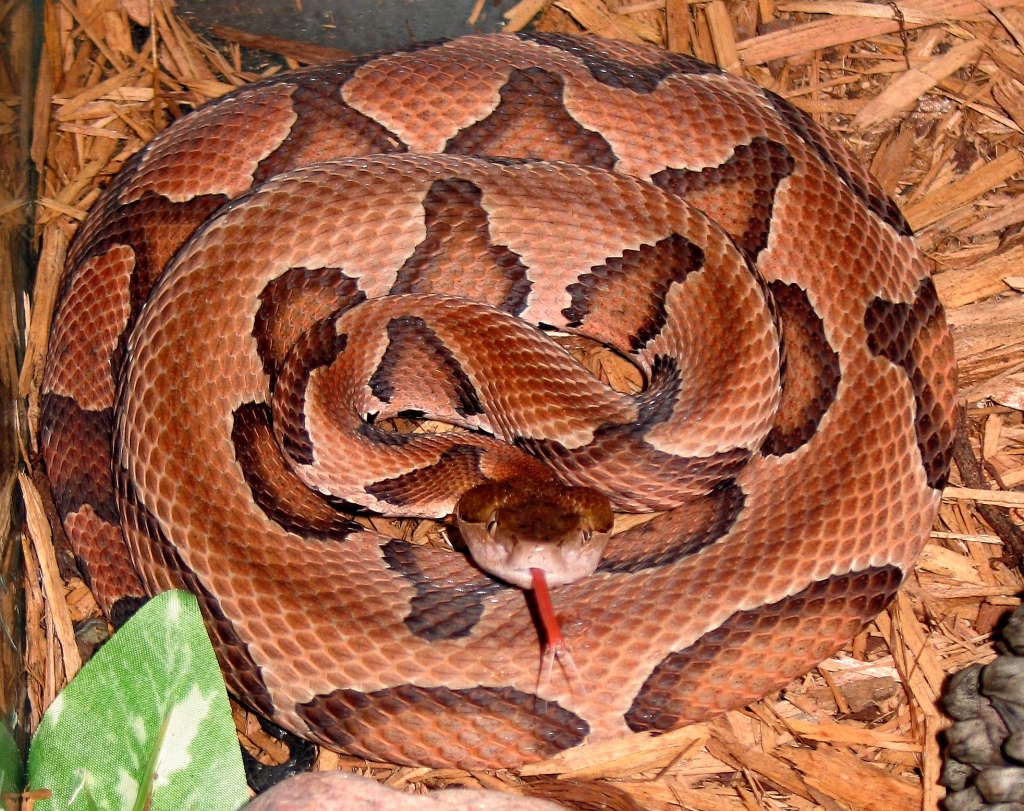 Range: Most of the eastern US; found in all AT states except Vermont, New Hampshire, and Maine; prefers deciduous and mixed forest habitats
Description: Typically 20-37 inches in length; pale or pinkish-tan with hourglass-shaped crossbands; broad, triangular head that is noticeably larger than neck; distinctly copper-hued head

The copperhead’s entire body is in various shades of bronze and tan, but the head does tend to be noticeably more coppery than the rest of the body in many specimens. Note that there are a number of totally harmless snakes that look somewhat similar to the copperhead and are often confused, such as the northern water snake.

Copperhead bites are far more common than timber rattler bites—unlike their rattly pit viper cousins, they are fairly jumpy and tend to strike as soon as they feel threatened without giving off many warning signs first. Furthermore, their mottled coppery coloration lets them blend in easily with leaf litter on the forest floor, so it’s relatively easy to accidentally stumble onto a well-camouflaged snake without realizing it. (Like timber rattlers, their first choice is still going to be to pass unnoticed or slither away in the opposite direction as fast as possible—they’re just generally more willing to move on to Plan B than rattlesnakes.)

The good news is that, although they are venomous, copperhead bites are almost never fatal to humans—they just hurt a whole lot. Still, if you get bitten, you should seek medical attention as soon as possible.

Copperheads are most active between March and October. You’re most likely to encounter them at dawn and dusk or overnight.

READ NEXT – Bears Noro, and Lyme: What to Worry About (Or Not) on Your Thru-Hike

I’m just being straight with y’all, this isn’t a comprehensive list of every snake you could possibly encounter out there—just a few of the more common varieties. If snakes are of interest to you, I suggest downloading a useful identification app such as iNaturalist. iNaturalist helps you identify local flora and fauna based on photos you submit to their database and your geographic location. It works surprisingly well and is a great educational tool. 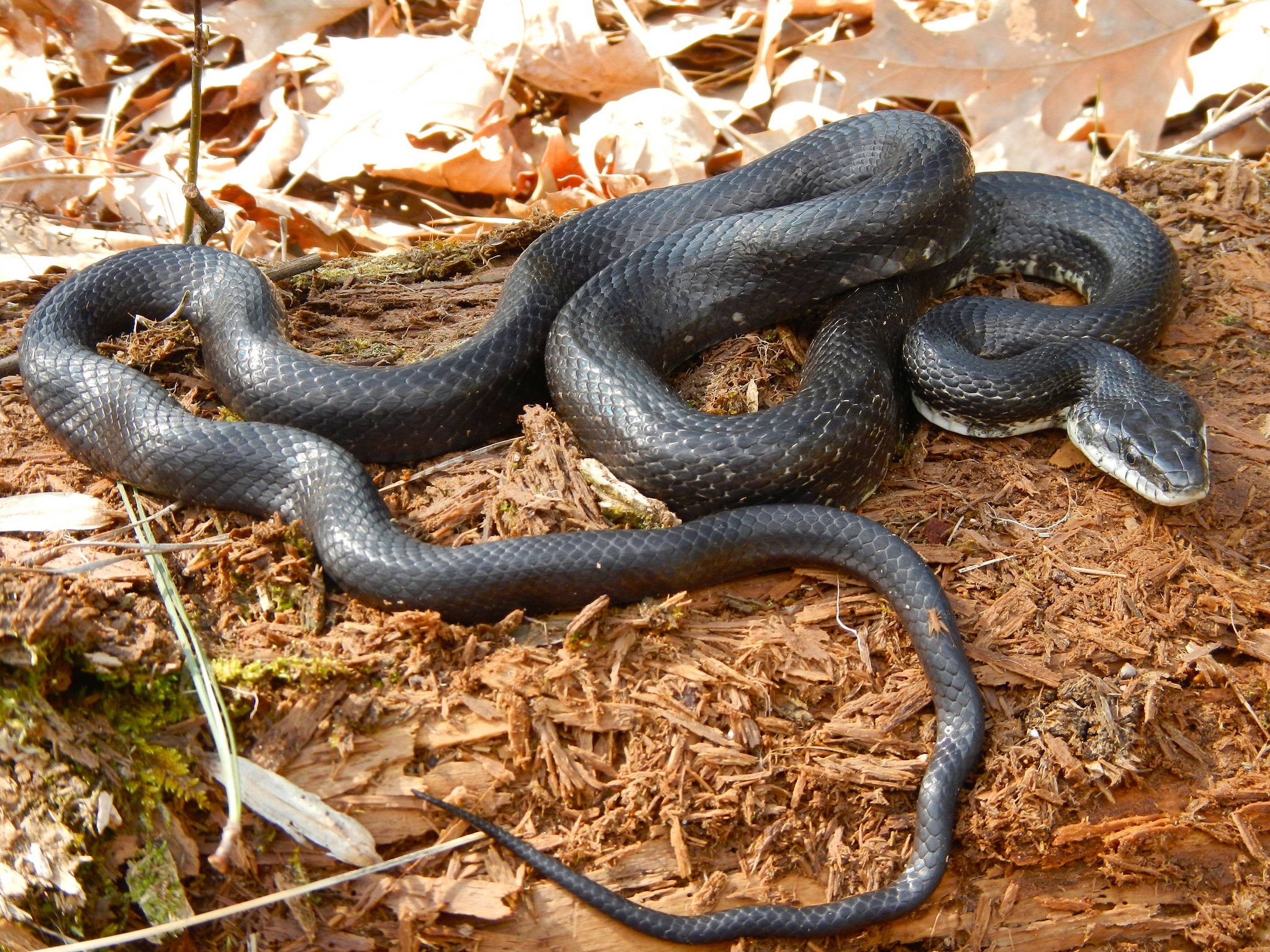 Eastern ratsnake. Notice the triangular shape of the head in this photo, likely an indication that the snake is agitated. Ratsnakes’ heads are typically narrower, but they can distort their heads to imitate the triangle shape characteristic of venomous snakes as a defense mechanism. Via Anne Devan-Song.

Range: Florida through western Vermont; all AT states except NH and ME
Description: typically 36-72 inches in length; adults black with whitish belly; juveniles grey or salt-and-pepper with dark blotches

These guys are probably the most common snakes you’ll encounter on the Appalachian Trail. I saw a literal pile of ratsnakes sunning themselves on a rock near Sunfish Pond, NJ while thru-hiking the AT, plus many other sightings elsewhere on the trail. Despite their sometimes alarming largeness, they’re not dangerous. All they really want in life is to climb trees, soak up the sun, and eat plenty of mice.

Although ratsnakes are not venomous themselves, you should still take care if you see one on the trail. This is because a) they could still bite if they feel cornered, which would be awfully painful even if they have no venom, and b) in rare cases, eastern timber rattlers can have solid black coloration that makes them look, at first glance, similar to ratsnakes. So don’t be too glib about walking past any black snakes you see lying across the Appalachian Trail. Watch and listen for a rattle just in case.

It’s far more common for ratsnakes to be confused with northern black racers, another jet black snake common in the Appalachian Mountains from northern Georgia all the way through Maine. Northern racers are also nonvenomous, but they’re more high-strung than ratsnakes and more likely to react aggressively when frightened.

Eastern ratsnakes hibernate during winter. In spring and fall, they are diurnal (active during the day), while in the heat of summer they are primarily nocturnal (active at night). 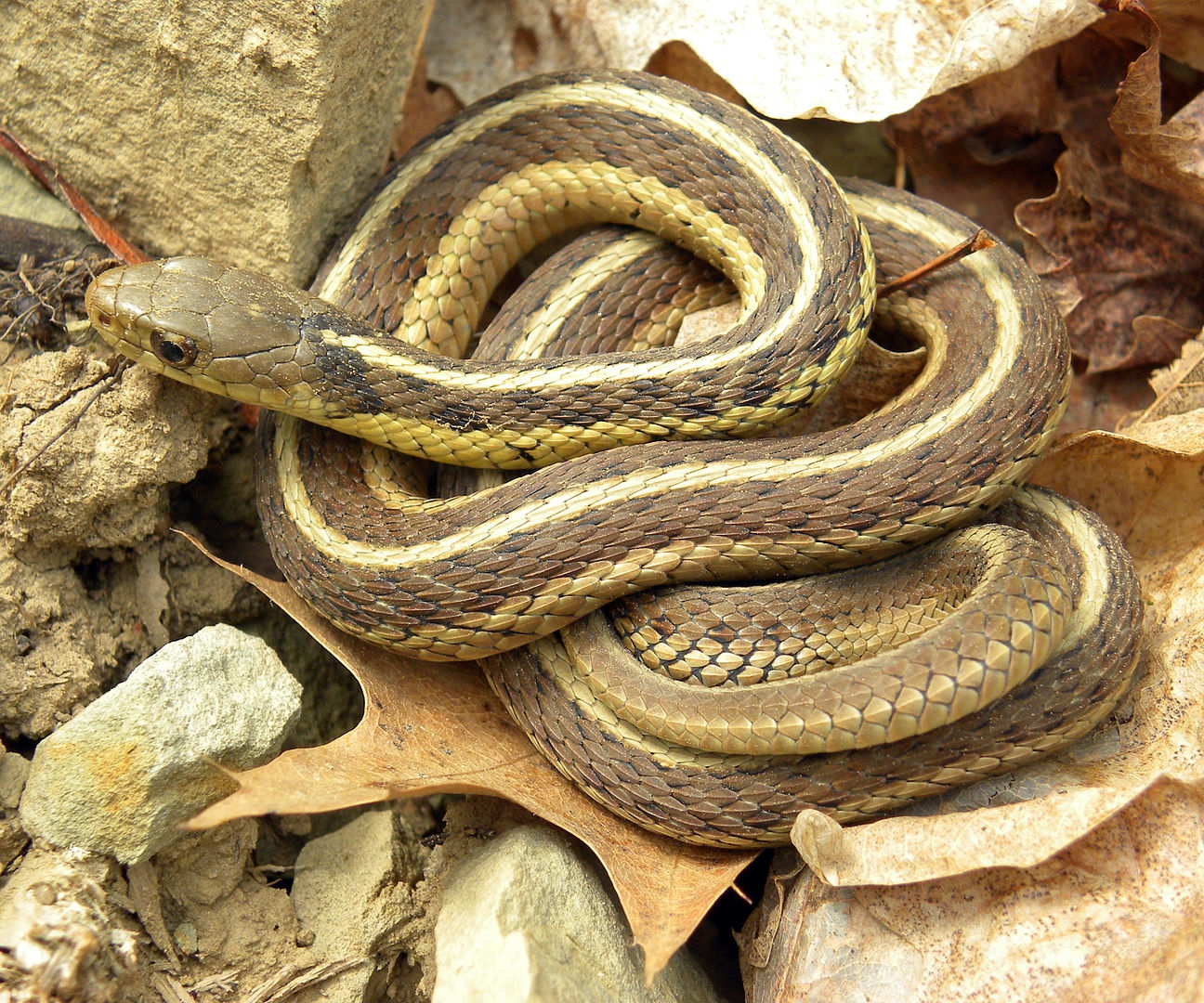 Range: Widely distributed east of the Mississippi River
Description: typically 18-26 inches in length; dark grey or black with lengthwise yellow ribbons from base of head to tail

Garter snakes are primarily diurnal, so you’re most likely to encounter them in daylight. Unlike many snakes, they may be active throughout the year, including on mild winter days. 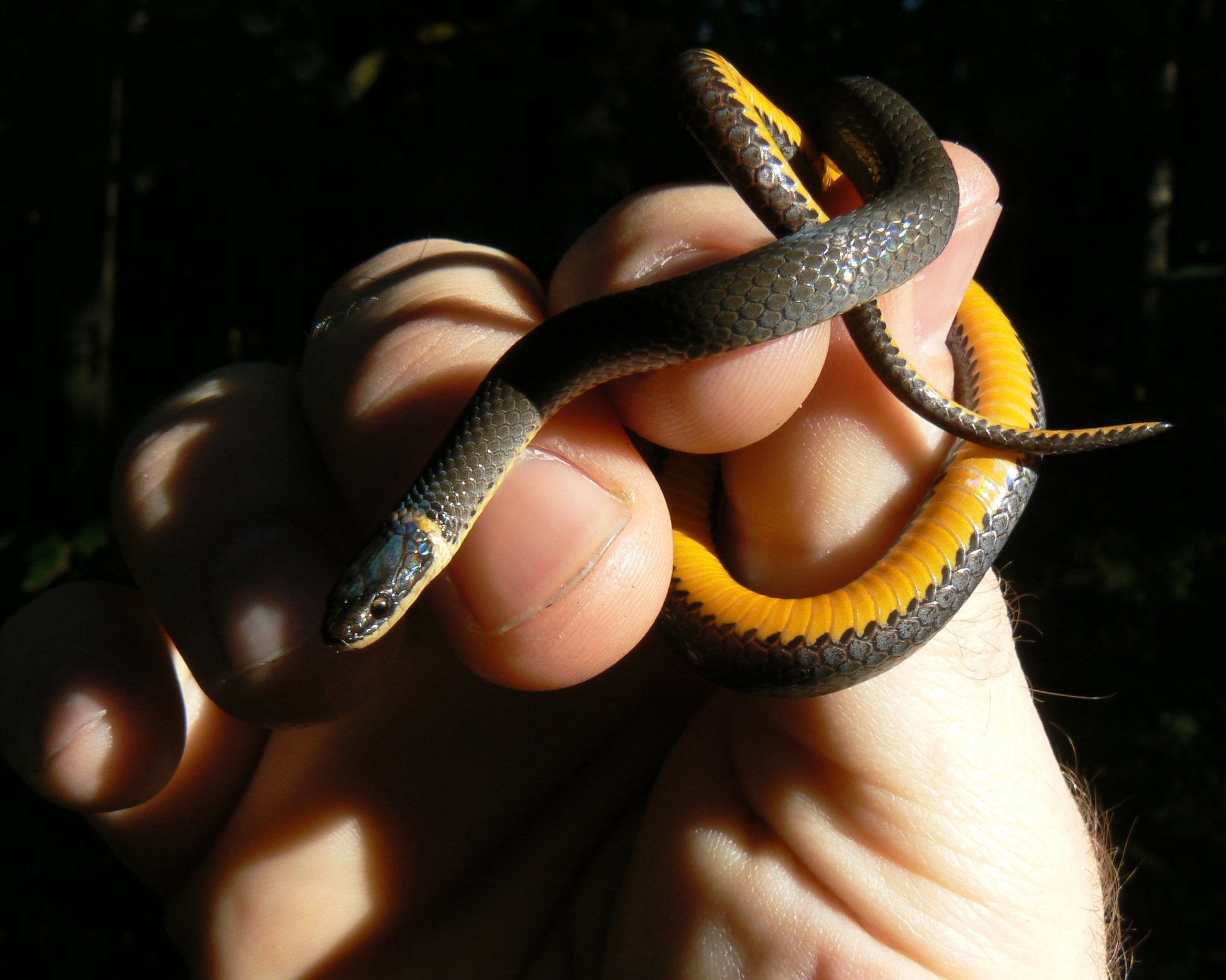 I simply cannot get enough of these little cutie-patooties. The tiny northern ringneck is easily identified by, you guessed it, a characteristic orange ring around the neck, as well as its distinctive orange underbelly and fun-size proportions. Not only are they not venomous, but they’re so diminutive that their little jaws probably wouldn’t even fit around the tip of your pinky finger, not that one would try to bite you anyway since they’re so mild-mannered. Sigh. I just love them so much.

Northern ringneck snakes are fairly common on the Appalachian Trail, but they are shy and elusive and also nocturnal, so it’s not all that common to actually see one out there. Keep an eye out, though—they’re a real treat if you do spot one.

Snakes on the AT: FAQs

Can a snake still bite me even if it isn’t venomous?

Yes, if you’re obnoxious enough, even non-venomous snakes will still bite you and it will still hurt a lot. Just like bears and most other wildlife, snakes really don’t want anything to do with you. If you feel mildly skeeved out when you spot one on the trail, just remember that it probably feels the same way about you.

It’s mostly semantics, honestly—it’s not like the EMTs won’t know what you’re talking about if you say you were bitten by a poisonous snake. That said, venomous is technically the correct term. Poisonous things sicken you when you bite them—think berries, fungi, certain species of frogs, etc.). Venomous things sicken you when they bite (or sting) you—snakes, bees, wasps, etc.

While researching for this post, I realized I must have been staring at my screen for too long when I misread “what to do if you are bitten by a snake” as “what to do if you are a bitch to a snake” while studying this helpful page on wildlife from the Appalachian Trail Conservancy. One of my more epic misreadings, rivaling the likes of the “giant cheese salamander” (Chinese giant salamander) and the supermarket self-checkout console that told me to go fuck myself after flatly refusing to ring up half my items. (Still not totally convinced I read that last one wrong).

But I digress. You, like me, are probably far more interested in what to do if you get bitten by a venomous snake. If you’re bitten (and I’ll remind you that this is quite rare, but it’s not bad to be prepared for the possibility), this is what you should do:

And contrary to popular opinion, this is what you absolutely should NOT do.

Aren’t there cottonmouths on the AT? 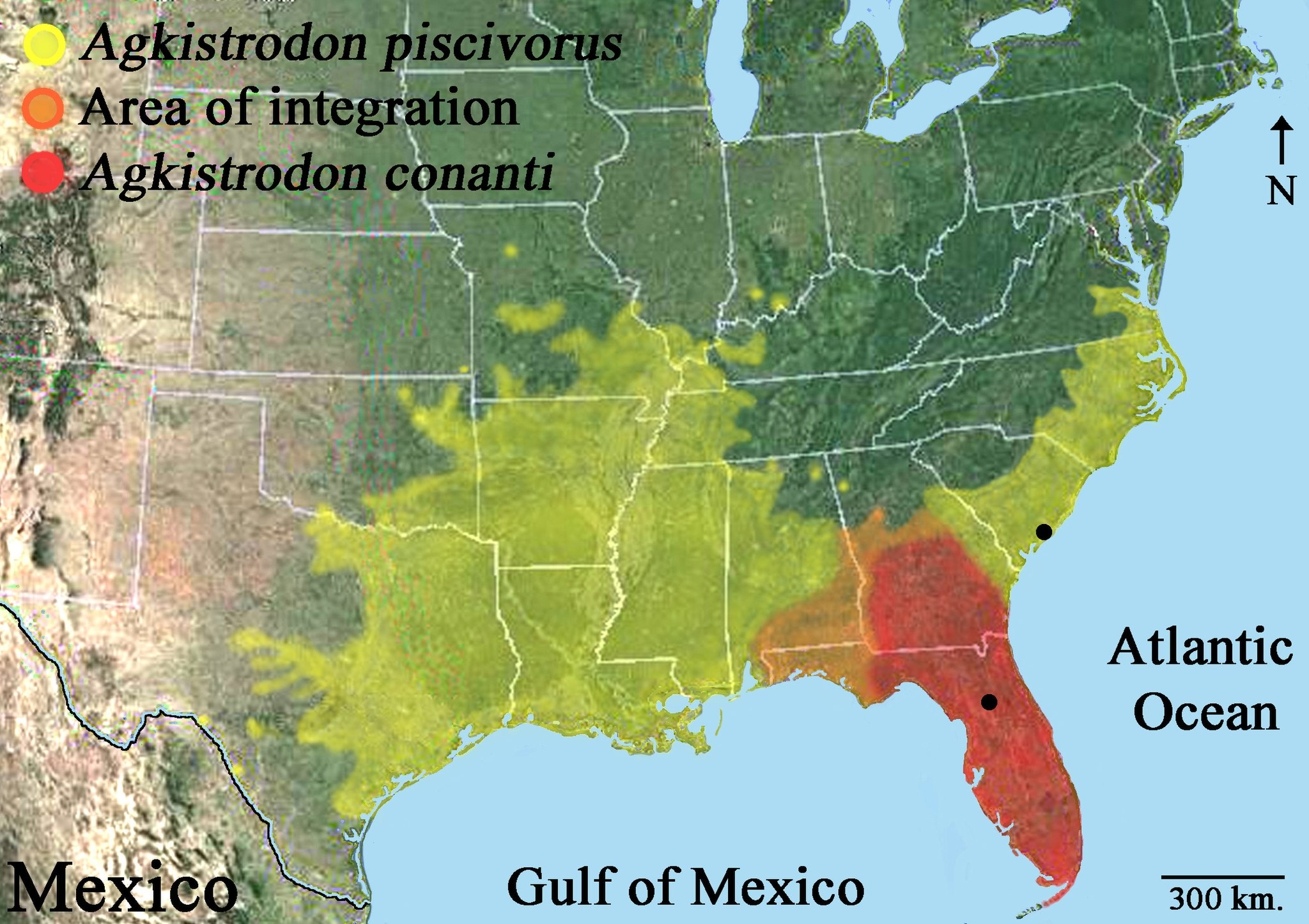 Actually, no. This is a common misconception. While cottonmouths, also known as water moccasins, are found in parts of Georgia, North Carolina, Tennessee, and Virginia (among other states), their geographic range does not overlap with the Appalachian Mountains. You will not encounter cottonmouths on the AT—the only venomous species you need to watch for are timber rattlesnakes and copperheads.

The Moral of the Story

Look, I get it. As someone who is irrationally, disproportionately, viscerally horrified by spiders, I am in no position to judge people who are afraid of snakes. But while I don’t expect anyone to magically become a herp lover overnight just because they read this article, I do hope it serves as a reminder that snakes are not the horrific monsters we sometimes make them out to be.

For one thing, they’re valuable members of our beloved trailside ecosystems. If nothing else moves you to care about them, consider that they help to control the population of mice and other small rodents, which in turn controls the tick population, a.k.a. less risk of Lyme disease for you and me.

Besides, more often than not, they’re more afraid of you than you are of them.  The best way to stay safe from snakes on the Appalachian Trail is simply to treat them with respect. If you fear them, give them a wide berth. If you love them, admire their majestic wiggliness without invading their personal space.