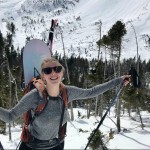 500 Miles and a Failed Relationship

I can still hear the scratchy voice barely coming through my phone.  I raced along a ridge line in the Smokey Mountain National Park as the wind whipped freeing rain into my face and blew the cell service away.  But despite the poor reception, I could hear the sorrow in Kaleb’s voice.  The rain couldn’t drown out his pleading tone: “It’s me or the trail.”  And after three years, how could it not be him?  He sounded so broken.

In the moment though, the brokenness only made me angry.  How could he not understand that it would never be him over the trail?  His ultimatum was an impossible one—I was literally slogging through wind and rain to continue my hike, I couldn’t even fathom getting off the trail.  Especially not when he was continuously reminding me about how I deserved no forgiveness, reminding me that the only reason we were having the conversation in the first place was that I had screwed up and done the unforgivable.

And I want to say that I blindsided myself too, but I think I knew it was over before I even left.  I am a codependent person.  I have always had a few people in my life whom I have relied on.  Kaleb was one of those people.  We fell in love quickly and passionately after meeting in a basement at a party that neither of us wanted to be at.  We adopted a dog together after barely two years of knowing each other, I told him I wanted to get married while I was feeling swirly at a Phish show on New Year’s Eve.  I loved him with my entire soul.

But we were a college relationship.  College kept us together because we were in the same place and on the same track in life.  When we graduated, things started to change.  Kaleb knew what he wanted, a job in the solar industry, a nice apartment in a real city, and stability.  He was ready to seek out that white picket fence life.  And me?  Well, I had no idea what I wanted.  I still don’t.  I had half-formed ideas about getting a short-term job and then going to grad school. But I didn’t feel crazy passionate about any of those things.  It was just a shadowy idea that I needed to do something productive.

When Covid hit, it gave me a lot of time to reflect on myself and my goals.  Suddenly, it was an opportune time to start saving money for the Appalachian Trail.  Kaleb was resistant to the idea from the beginning. I guess maybe he sensed that the trail would change something between us, despite my reassurances that our relationship was strong enough to withstand a six-month hiatus.  But it wasn’t.

A Trail Full of Changes

Coming out onto the trail, I realized just how much I was using Kaleb as a crutch.  I was so lucky to be in a loving relationship, but I was also limiting myself because of it.  I blocked out the voices telling me that I wasn’t entirely happy in my relationship because it was easier than admitting we were together because of comfort.  Pre-trail, without Kaleb, I thought I would drown.  My life was so wrapped up in his.  We lived together with our dog-child, we had the same interests and the same friends.  To break up would mean to start anew and to think of that felt similar to looking at a huge mountain looming on the horizon.  I couldn’t even imagine how I would start over.

The trail is teaching me that I could be giving up too much of my freedom by settling down and has really proved that I am not ready for it.  What I did to him was selfish and wrong, but I think it was a necessary teaching moment for me.

Trying to Process it All

Honestly, the weirdest thing has been the lack of emotion regarding the entire breakup on my part.  I have always been a ball of Roman Candle emotions.  Explosive and impulsive.  I feel everything always.  But out here, I think the constant walking is actually sucking all my emotional energy away from me.

I have barely processed the passing of a three-year-long relationship.  (Again, a relationship where we lived together for 2 of three years and owned a dog).  I keep waiting for the weight of it all to hit me and it just isn’t.  I know that I wish it hadn’t ended the way it did.  It makes my heart feel like it’s filling up with concrete to think of how much I hurt him.  I hate to think of him wandering around the city we were supposed to make into our home all alone.  But that’s about the extent of it.  I feel like I am in the eye of a hurricane, the shitstorm is swirling around me and I am just placidly meandering down a 2,200-mile trail.  I wonder if the reality of it all will slam into me after I summit Katahdin.

It’s funny what makes me think of him though.  There are the normal things, like a song we enjoyed together or a familiar food.  But then there are other, more abstract things.  I shared a twin bed at the Nature’s Inn Hostel with the guy I am currently seeing, and couldn’t stop thinking about Kaleb (so weird, I know).  I was hit by such strong nostalgia of cramming myself into the uncomfortable dorm beds at UVM our sophomore year of college it was almost overwhelming.  It was also probably the saddest I have felt in regards to the entire ordeal.

Honestly, I am having a hard time ending this blog because it feels so personal.  I have been putting this post off over and over again because the idea of publishing something like this was extremely overwhelming, but it has been so much of my experience on this trail, I feel that it would be wrong to hold it back.  The reality of thru hiking is that, while it is amazing and often feels otherworldly, it still affects your real life and I am trying to remember that I have a real life to go back to when this adventure ends.  And it’s hard because I am sort of staring into a big black hole after Katahdin, but life will go on.

When I was three years old and prowling the local playground, growling at other children, my mother would have to apologize on my behalf to the other parents. “She’s not mean, she just thinks she is a dragon.” So yeah, you could say I have taken the unconventional path through life from the very start!