500 Miles Behind Us, a Lot of Great Times Ahead

Dear dedicated, avid, and frequently reminding reader (aka Mum), please find below our latest blog post. Sorry it’s been so long. It does feel like there’s a lot to catch up on.

Our last blog came from, I think, North Carolina. We’ve now left N.C. behind, along with Tennessee, and have arrived in Virginia. Tennessee has so far been my favorite state; sorry North Carolina and Georgia. The weather was glorious (Siân/Robin has the most ridiculous tan lines), the terrain forgiving (for the most part), and the scenery stunning. Typified by Laurel Falls and the few miles either side of it.

I’m a sucker for a water source on the trail and while I don’t believe I have a soul, if I do, it’s recharged and rejuvenated by the sight and sound of a flowing stream or babbling brook. I could sit by water all day and be very happy indeed. Laurel Falls and the area around it was amazing. 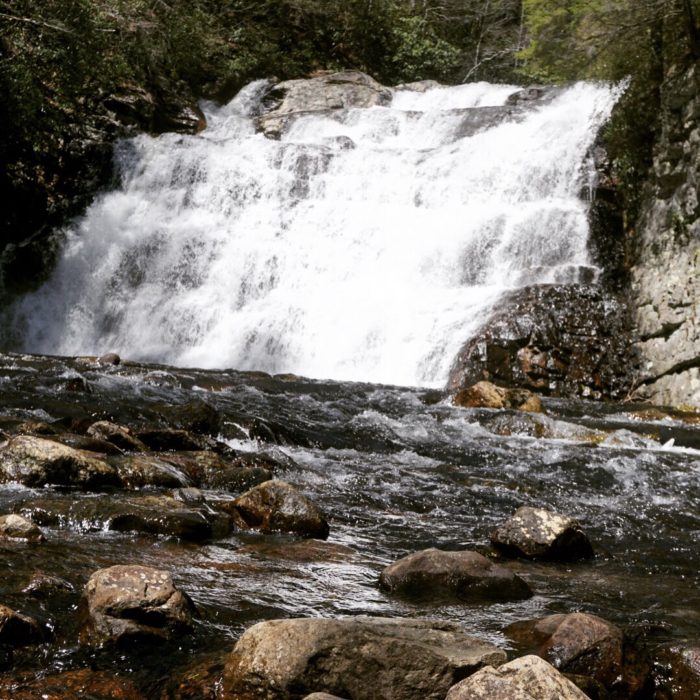 I often slow our progress each day by insisting I stop to take a picture of every pretty water source we come across. Those back home can look forward to my return and being bored silly by a 300-slide presentation titled “Out of Focus Water Sources of the Appalachian Trail.” My photography skills have not improved. 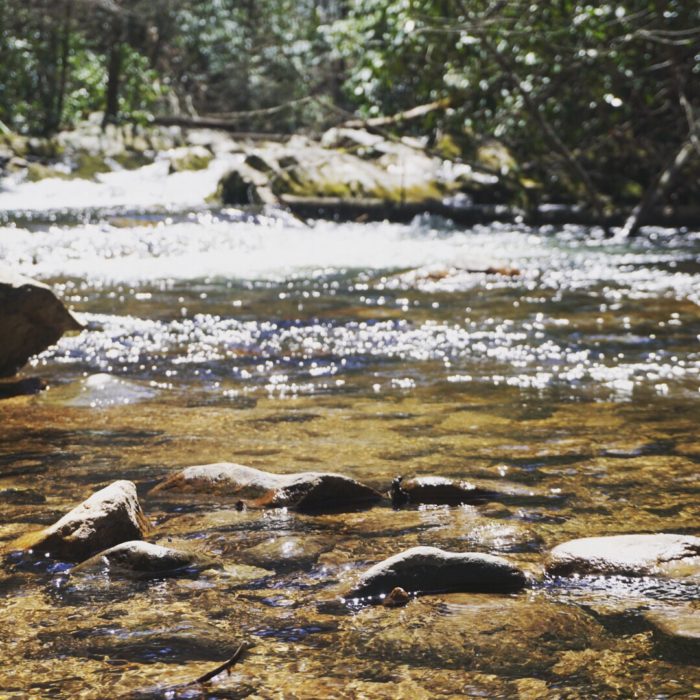 The weather in the last few weeks has been inconsistent to say the least. Each time it snows I convince myself it will be the last time. It’s mid-April, for goodness’ sake. No matter the conditions, however, there is a mouse at Overmountain Shelter prepared for it all. The shelter is well known on the trail as it’s a converted barn, so it offers some variety from the norm. We arrived late afternoon a week or so ago to find a local brewery was using the shelter for its staff party. Of all the people to run into, a brewing company is unsurprisingly high on the list. They already had the campfire going when we arrived and were eager to share their beer and hot dogs with us, which was all greatly received. I’d been packing out s’more supplies since the last town after I’d won a game of very low stakes poker and pledged to spend the winnings on group treats, but unfortunately had then lost contact with the other players. This seemed like a nice occasion to take the weight out of my bag, so we broke out the supplies and were able to give something back for the beer and hot dog generosity. We had never  made s’mores on a campfire before, and the Americans took great glee in teaching us how to make them. If I ever go to Asheville, I feel like I have good friends at the brewery.

Anyway, this was supposed to be a story about the mouse. That night, we hung our food as usual, but not fearing that a bear would wander upstairs in a barn. We hung the food from the rafters rather than a tree, with only the mice considered a threat. With all the crumbs outside from the brewery team’s food, I thought there was little chance the mice would be anywhere else other than around the burned-out campfire.

When morning came I discovered I was wrong. But the mice upstairs in the barn hadn’t gone for our food; instead they’d decided to eat through Squid Kid’s T-shirt! The back of it was full of holes and he’d only bought it a few days back. I now like to think of a mouse in Overmountain Shelter with merino wool bedding. Cool in the summer, warm in the winter, he took his chance to build a nice nest for his mouse family. In my imagination he has a nightcap (hat, not drink) and a pipe. Though naturally he never smokes in the nest. 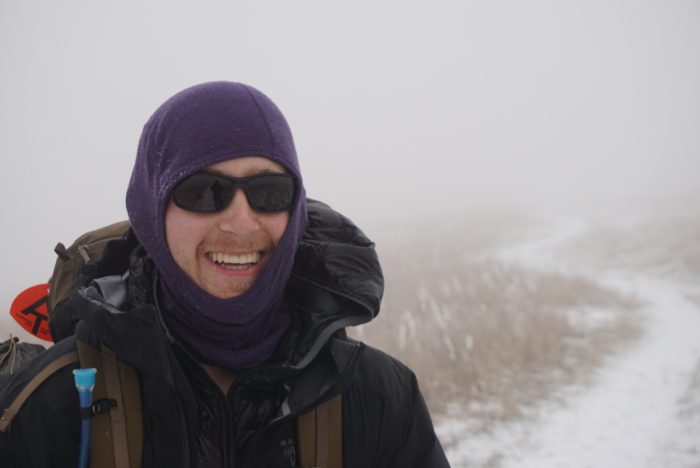 Squid Kid remaining upbeat the morning he discovered his T-shirt had received a nibbling.

Rain has of course featured, too. Recently we took our second rest day of the trip, feeling it was now well-deserved, and it coincided with a deluge from above. It rained hard all day and we were glad to be sitting it out in the comfort of a hostel rather than hiking. The next day the trail was awash with water. I was, of course, slowing us down with incessant low-quality photography of all the streams gushing down the mountains and over the trail. We were expecting there to be a lot of water around the day after all that rainfall, but we still weren’t expecting to have to ford a wide, fast-flowing stream cutting straight across the trail.

I’ve always considered myself a good boyfriend and so I did what any good boyfriend would do in this situation: I let Siân go first to see if it was safe. Thankfully, she made it across in once piece and I followed suit, taking off my shoes, socks, and trousers to keep them all dry. 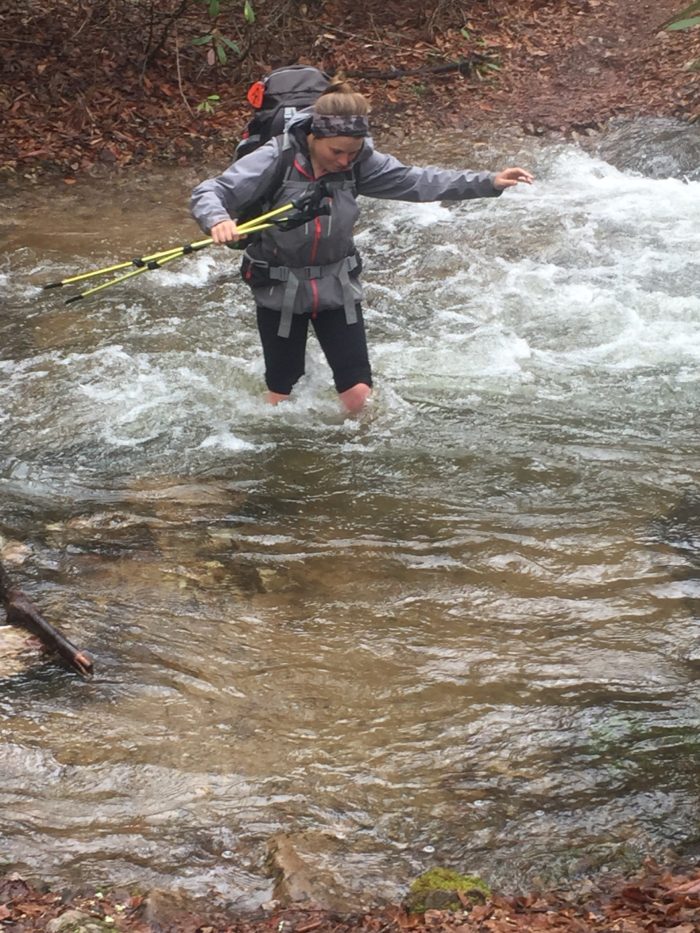 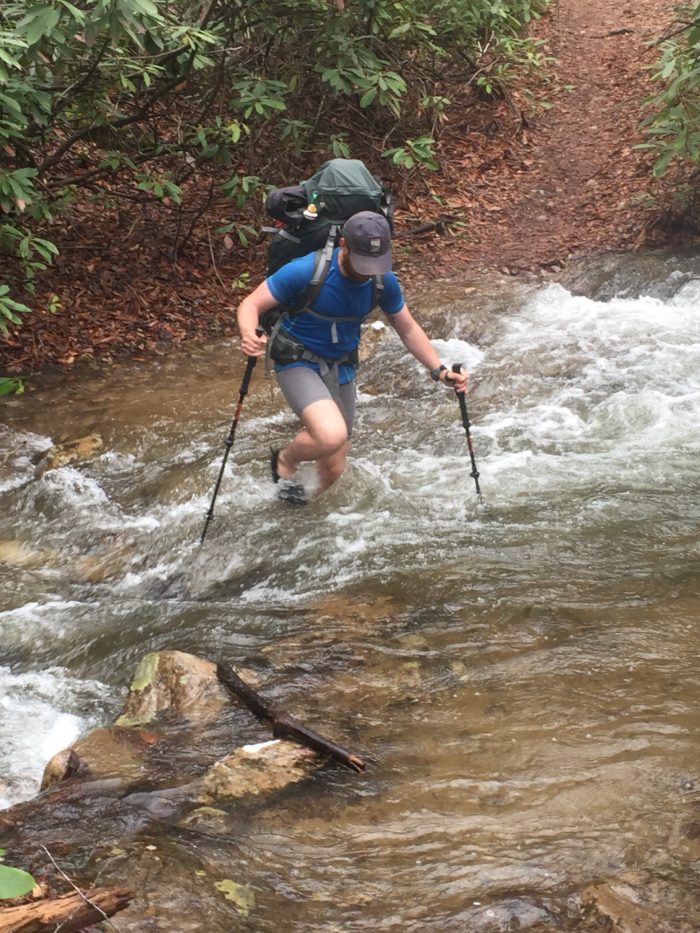 There are some pretty big milestones to mention, too. Our longest day of the trip so far (24 miles) took us over the Tennessee border and into Virginia. There are 14 states along the AT, but more than a quarter of the trail is in Virginia. That’s over 500 miles of trail. Reaching this state and the start of this large section feels like a big achievement. 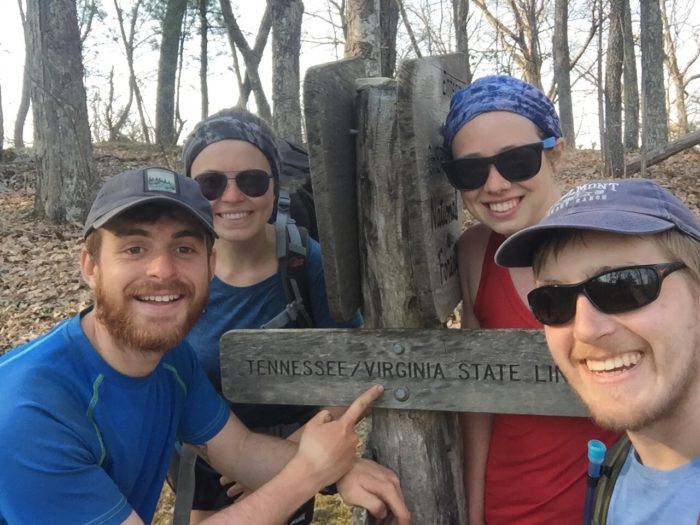 The tramily crossing the state line.

Up until now reaching state lines has been a source of morale and encouragement. It’s felt like a way of tangibly measuring our progress. But with so many miles to go before the next state, we could be in Virginia for five weeks. I can’t help thinking that if all we think about is getting out of Virginia, then 200 miles will pass and we’ll start to get disheartened that we still have more than 300 still to go.

It’s for the same reason we never think about Maine or Katahdin. That’s just too far away right now and it’ll take a toll mentally if we focus on something that remains so far away for so long, despite all our efforts. We never think beyond where we plan to camp each night and where our next resupply will be, all the while each days’ achievements pile up on top of the previous day and, quite literally, step by step, we’re getting closer to the end goal.

Speaking of which. We’ve passed the 500-mile mark. We’re currently at 533 miles and tomorrow we’ll pass the quarter-way point. That feels like a big deal. If we can do a quarter, we can do half; and if we can do half, we can do it all. Right? It feels like we’re transitioning out of the period where some of the most challenging terrain has overlapped with some of the most challenging weather, so if those things haven’t stopped us by this point, why should they later? We’re sticking to our monthly budget well, so we shouldn’t run out of money. Injury could always strike, but we take our foot care very seriously and are both in good condition. I’ve developed a bad pain in my right shoulder blade, which comes on every morning, but I’ve discovered that two five-minute breaks in the first hour of hiking bring it down to a very manageable level for the rest of the day. We’ve both had painful feet and knees, but it sort of comes with the territory, and isn’t debilitating or prohibitive.

The day we crossed 500 miles was tough physically, with lots of climbing over boulders in phenomenal wind on the Grayson Highlands. We were, however, rewarded with a visit from the wild ponies that roam free up there. In the evening they came right up to our tents, looking for food (in which they were almost successful in obtaining as they went for our friend Hedwig’s dinner as she cooked) and were very friendly. 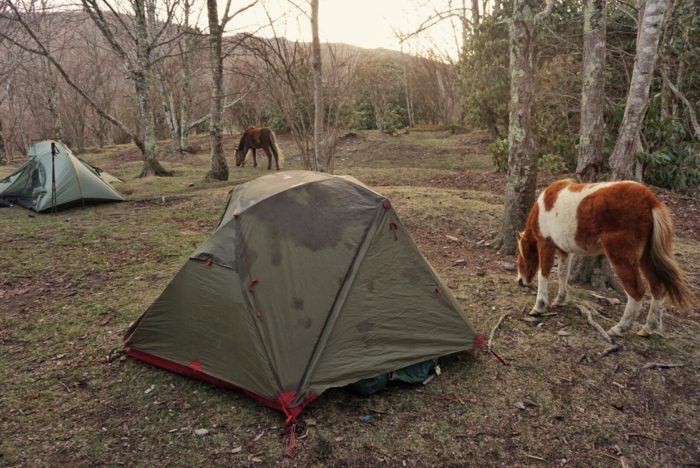 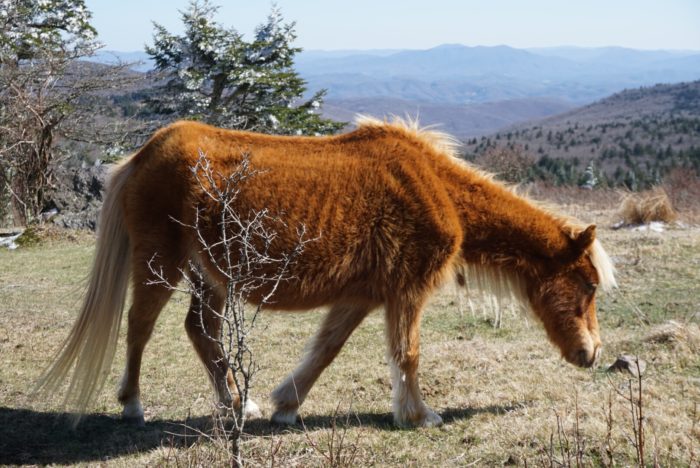 They’re not the only wildlife we’ve seen, either. The same evening while I was filtering water from a spring, two deer were less than 15 feet away from me grazing. They watched me approach, then turned their backs and continued eating. They knew I was there, almost right behind them collecting water, but didn’t seem to mind at all. I don’t mean to get too soppy, but it was a really nice connection with nature.

We’ve also seen our first snake of the trip and our first lizard. The snake was thankfully small enough to almost be considered cute. Still no bear sightings, but two hikers we know have insisted they’ve seen mountain lions or some other big cat. I remain to be convinced. 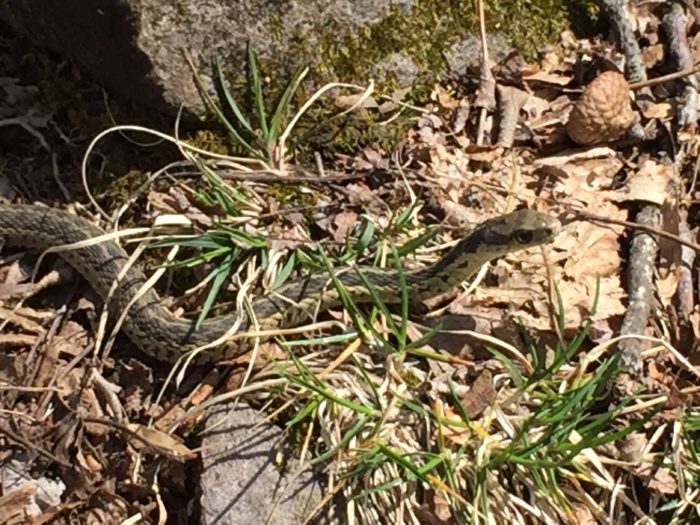 I’m glad it wasn’t one of his bigger cousins.

There’s still lots and lots of trail to go and we’re really excited for it. This first 500 miles have been about proving to ourselves we can do this and to cover the miles we need to every day. Our daily target of 15 miles is now beginning to feel a bit on the easy side, which is a great place to be. We know now we can cover 15 to 20 miles day in, day out regardless of terrain and weather, which is actually really freeing. We can now afford to take our time each day a bit more and take in more of what the trail has to offer. Who knows, I may even be able to take some more photographs of water.