This is a guest post by Richard “Crossword” Guenther.

Let me start with a little background. I retired in February 2020 with the intention of doing a thru-hike that year, but we all know what happened in 2020! My career spanned more than 30 years, starting in banking and spending the last 22 years in corporate finance and operations. When I got back from a hiking vacation in January 2020 feeling no more relaxed than when I left, I thought it was time.

I completed a flip-flop thru-hike of the Appalachian Trail in 2022.

I started on April 9 at Rockfish Gap, which I think is the 2nd most popular starting point after Harpers Ferry and is at the southern end of Shenandoah National Park, and summitted Katahdin on August 14.

I then took two weeks off at home (I live in Maryland, just north of Washington, DC) before starting south from Rockfish Gap on August 31. I summitted Springer Mountain on October 29, though I had to make up a 65-mile stretch I skipped in September when I got sick and went home for a week because I wanted to join a friend who was getting off trail a week later. I finished my final miles on November 6.

So why did I choose to do a flip-flop? 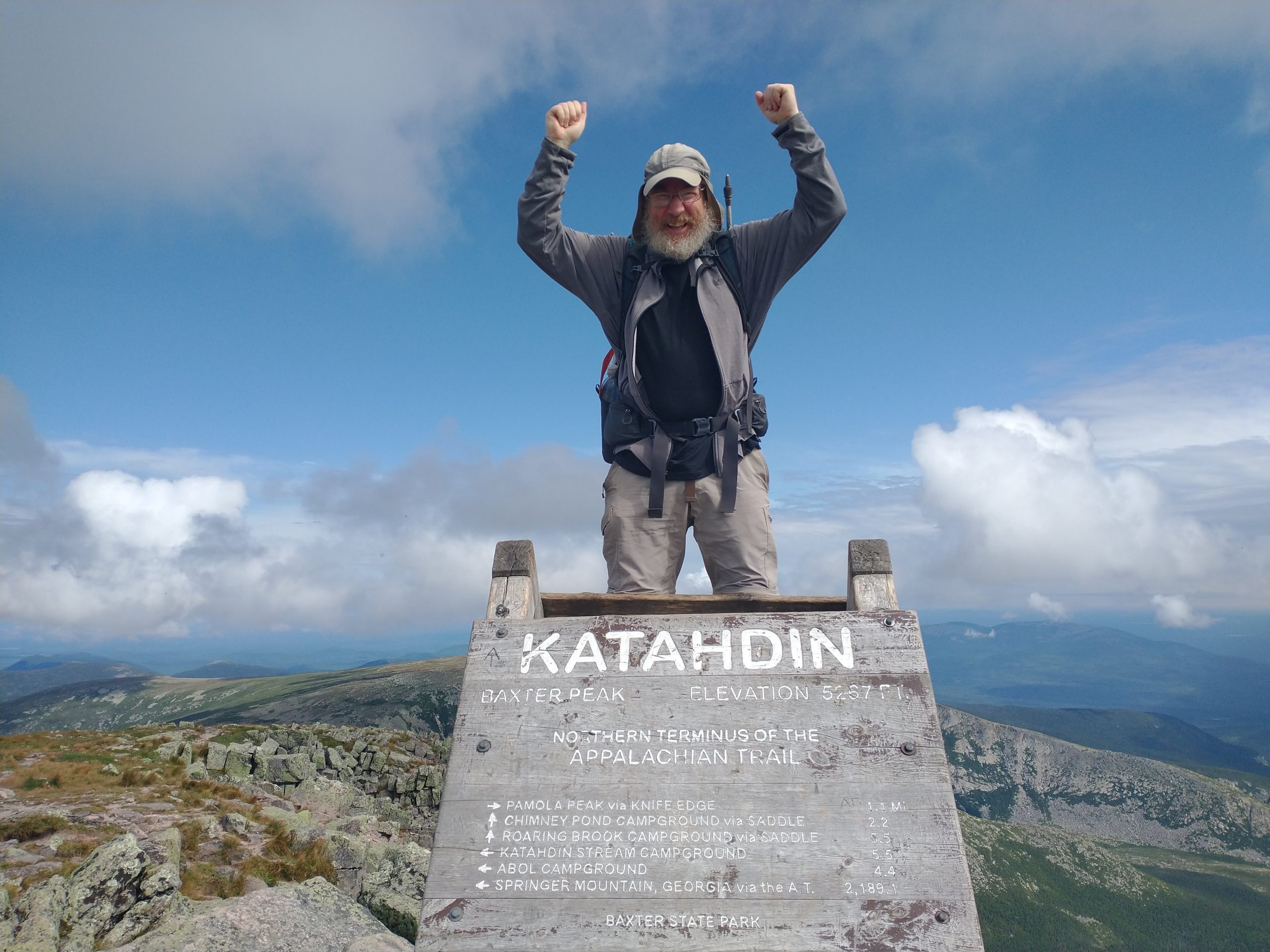 I’ll be honest: the number one reason was avoiding the crowds! I couldn’t imagine what it would be like trying to find a campsite or room in a shelter if I had to compete with 50 other people for space. “Enjoyable” is not a word that comes to mind with that scenario, and I wanted to enjoy my hike. If I was going to spend six months on the trail, I would be more likely to successfully thru-hike if I wasn’t competing against a crowd of people. And fewer people means a lower risk of things like norovirus!

READ NEXT – Which Triple Crown Trail Should You Hike?

2. Less Impact on the Trail 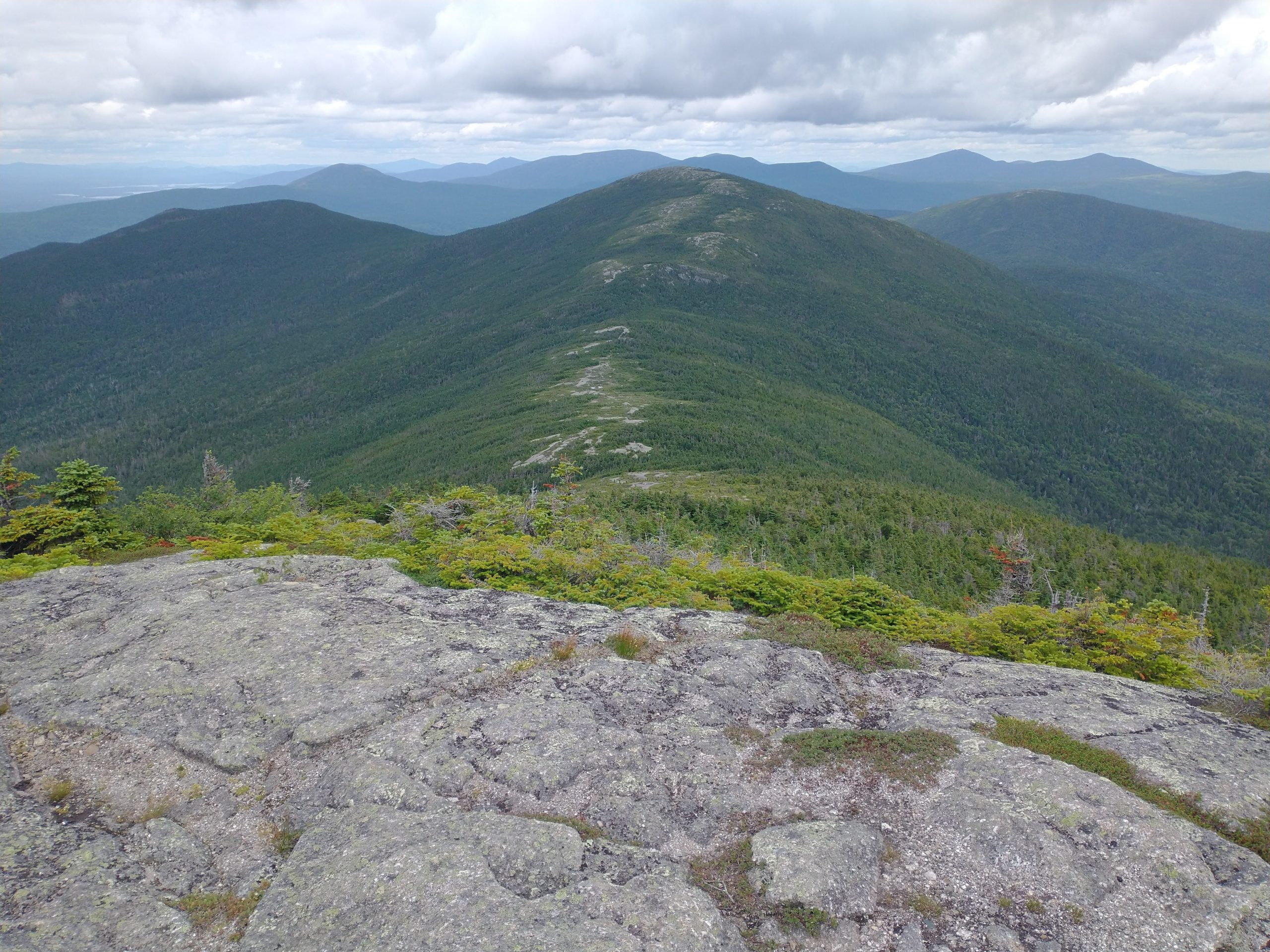 A related reason to the first one, and one I became aware of within the past couple years, is that a flip-flop hike reduces the impact on the trail and the surrounding communities. I had read an article from the ATC about reasons for flip-flopping, and this made a lot of sense to me. The number of people hiking the AT has increased significantly, including day hikers, sections hikers and thru-hikers, and by doing a flip-flop, I was choosing to hike where there were fewer people at the same time.

We are all familiar with the principles of Leave No Trace, but all of us leave some kind of trace just by hiking the trail. So this is a way to leave less trace than you would otherwise.

Another big reason to choose a flip-flop is the weather. I thought about this to some degree when I chose my start date. But I didn’t realize how much this would be a factor on my thru-hike. By starting in April I intended to avoid as much of the winter weather as possible.

I grew up in Buffalo, NY so I know snow. But that doesn’t mean I enjoy it when I am backpacking. I didn’t escape the snow entirely: it snowed on April 18, which was my last day in Shenandoah. They ended up closing Skyline Drive due to the snow because they got 10 inches at the highest elevations! But other than that, I hiked in the spring for an extended period as I went north. It was great to see flowers blooming for at least three months. I was also able to avoid the hottest part of the summer in the Mid-Atlantic states. We had a few 90-degree days, even in Maine, but nowhere near as many as other hikers further south.

The great weather extended down to the southern portion of my flip-flop. I originally didn’t think I would start my southern section until September 15, as I was expecting Virginia to be in the 90s until then. But when I checked the weather at the end of August it was a doable low-to-mid 80s at altitude. And the timing worked out so that I was able to hike the Smokies at the peak of fall foliage! I did experience a few nights in the 20s near the end, but generally speaking, the temps were great throughout my hike.

And did I mention that I hiked in the rain fewer than 15 days total? This was more a matter of luck and probably connected to the drought, which isn’t a good thing. But I’ll take it!

READ NEXT – Is a Winter AT Thru-Hike Right for You? 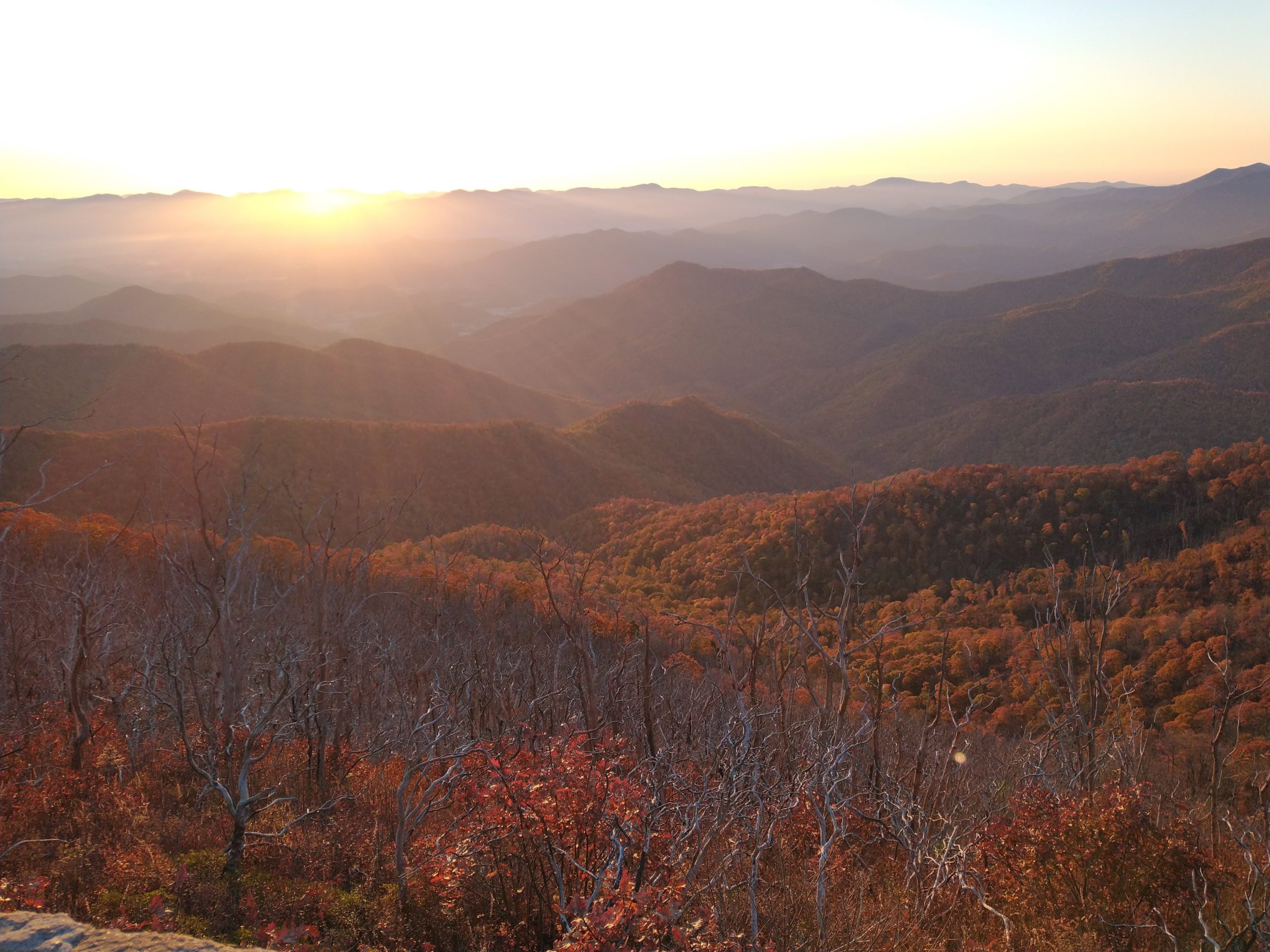 An unexpected reason that a flip-flop was right for me is that most of the other flip-floppers were at a similar stage in their lives as me, i.e., they were retired. Not everyone was retired, and I have no problem hiking with all kinds of people. But having people that have had similar experiences was an added bonus as we talked about things when we finished for the day. There were many older hikers that provided inspiration because they were doing a thru-hike in their late 60s and early 70s. I can only hope to be able to do that at their age!

Another bonus from a flip-flop is that you don’t have the time pressures of NOBO and SOBO hikers. If you are going NOBO, you need to get to Katahdin before the first snow flies, as periodic trail closures due to winter weather can thwart hikers.  This typically means reaching Katahdin by October 15.

Likewise, most SOBO hikers want to finish before it gets too cold and the snow starts to fly down south. This can be a challenge as snow in the mountains of Tennessee and Georgia typically starts after November 15. Of course, having the right gear means you can hike through this. But that typically means a heavier pack and slower hiking due to having to get through the snow.

Because I started at mile 864, I was able to summit Katahdin on August 14. And this was after getting off for five days for a wedding, quarantining in town for four days when I got Covid, and going hut-to-hut in the Whites because this is tough hiking.

6. Option for a Gentler Start

And the final reason a flip-flop worked great for me is that I was able to start in easier terrain. Shenandoah, where I started, is some of the easiest hiking on the trail and the food options at camp stores and waysides through the park allow you to carry less weight. And even though there are more rocks in Maryland and Pennsylvania, starting in Harpers Ferry also gives you some easier hiking than starting in Georgia or Maine.

I had done some backpacking prior to my thru-hike, but nothing more than 80 miles or so at one time. So I had to get my body in shape, and this was a pleasant way to do so. Hikers going NOBO and SOBO obviously need to also get in shape, but they tend to be younger hikers and can more easily handle the big climbs encountered at either end.

Of course, there are downsides to this choice as well. You don’t get to finish on Katahdin (though I finished at the Arch at the end of the approach trail!). It gets a bit lonely down south when there are far fewer hikers. And some of the hostels start to close at the end of October. But I could not be happier with my choice, and I am not sure I would have completed my thru-hike if I had started NOBO or SOBO. At the end of the day, I hiked every mile of the trail, and that is what constitutes a thru-hike. So if you are considering your options, I highly recommend giving some thought to a flip-flop! 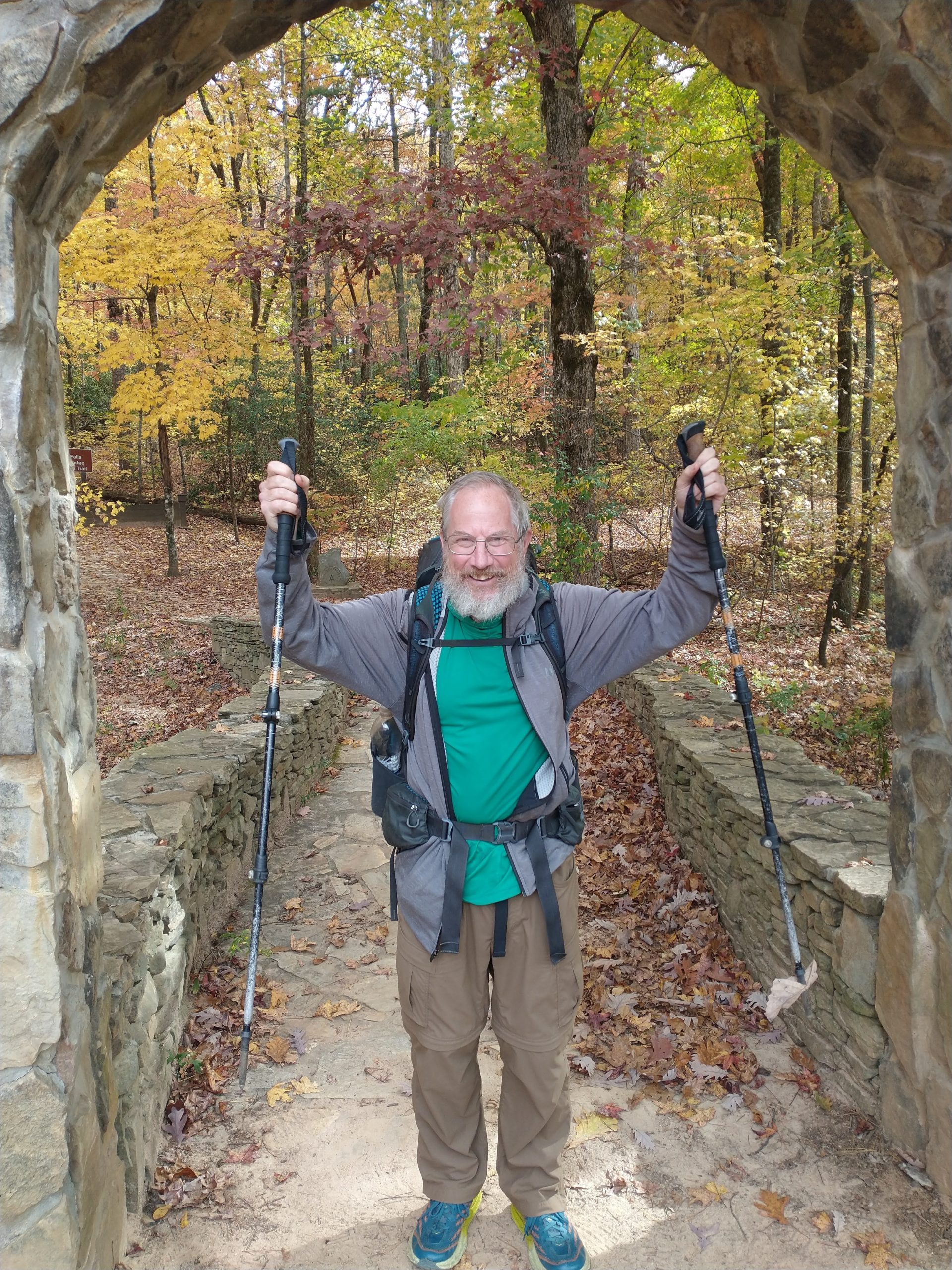 Richard “Crossword” Guenther lives in Kensington, MD and has been married for 32 years to his lovely wife Diana. He has three wonderful children and was involved in Scouting for over a decade, including as the Scoutmaster of Troop 439. He worked in the banking industry and then in corporate finance and operations, retiring in early 2020. He started backpacking in 2010 and has hiked all over the US, as well as treks in Iceland and Patagonia. He summited Mount Kilimanjaro in 2019 and has a bucket list of 75 hikes to do in the future!