7 Women Who Made History on the Appalachian Trail

This is not surprising. It is a reflection of a past society, where women were often discouraged from striking out on their own. It is also a testament to how far modern society has come; the number of female thru-hikers is on the rise, and hikers like Jennifer Pharr Davis and Heather “Anish” Anderson are prominent figures in the community.

But that does not mean everything is hunky-dory. Sexism in the hiking community is still very much real. And part of this stems from a lack of historical context, with many hikers simply unaware of these legendary female hikers.

Women hikers have achieved so much already, and will only continue achieve more in the future. Credit needs to be given where credit is due.

So let’s give some recognition to the women – both historic and modern – who turned their backs to the naysayers, put on their best hiking shoes, and climbed over 2,000 miles of mountains.

In 1970, Kilpatrick and her husband attended an ATC ceremony honoring the first 2,000-milers. 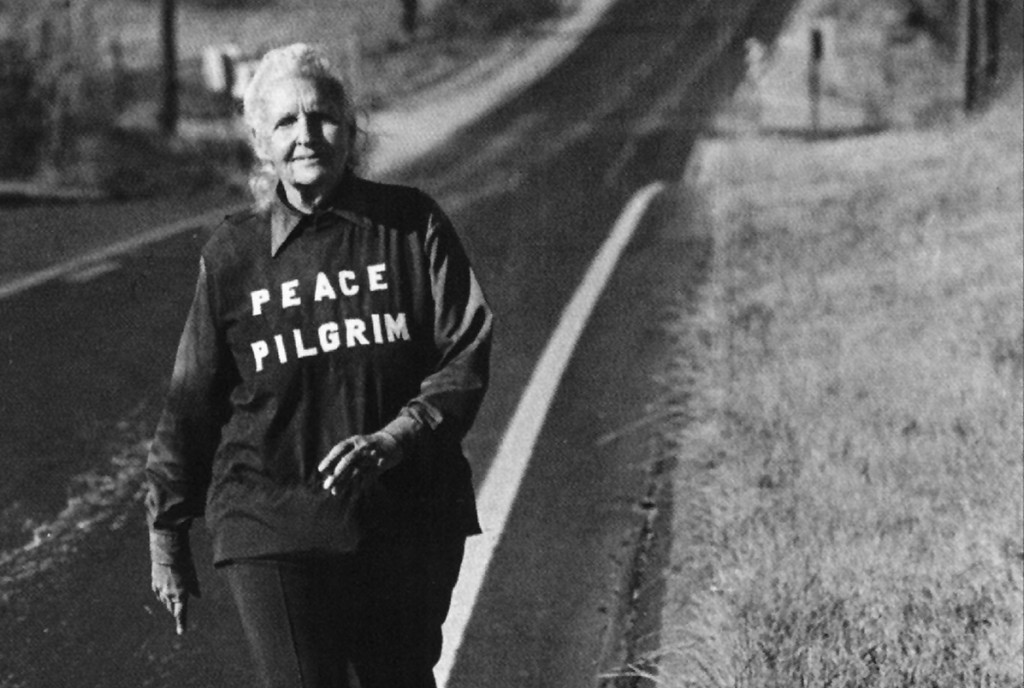 Mildred Ryder, better known as Peace Pilgrim, was the first woman to complete the entire Appalachian Trail in one season. She did so through a flip-flop, accompanied by her friend Richard Lamb. They began in their hike in Georgia on April 26, 1952 headed northbound. They hiked till Harrisburg, PA, then drove up to Katahdin and trekked back south. After a short detour to hike the Vermont Trail, they completed their journey in October of that year.

During her time on the trail, Ryder often went by the name Mildred Lamb. This was likely done to avoid dealing with the scandal that would come from an unmarried man and woman traveling together.

Ryder was 52 years old when she completed her thru-hike.

Something on the Appalachian Trail inspired Ryder to continue walking. As a spiritual teacher and peace advocate, she walked over 25,000 miles across the United States to spread her message of love and non-violence.

Ryder discusses her experience on the Appalachian Trail in her book, Peace Pilgrim: Her Life and Works in Her Own Words. Her words are nothing but encouraging:

If you are free, I recommend a hiking trip on a wilderness footpath.

How inspiring it is to walk all day in the sunshine and sleep all night under the stars. What a wonderful experience in simple, natural living.

… You soon experience and learn to appreciate the great freedom of simplicity. 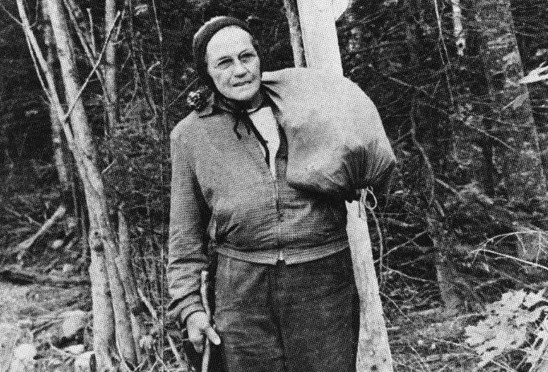 Emma Gatewood, known better by her trail name Grandma Gatewood, is the first woman to hike the Appalachian Trail solo.

Emma Gatewood aka “Grandma Gatewood” is the heavyweight in this list of amazing female hikers. She is the most badass of the badasses, a giant of her time and ours.

Her story is well-known: at the age of 67, this mother of 11 and grandmother of 23 hiked the Appalachian Trail with nothing but a knapsack and a pair of Keds. She carried neither a sleeping bag nor a tent, preferring to rely on her own resourcefulness and the hospitality of complete strangers.

This is the basic story most hikers know. So let’s dive a bit deeper.

Gatewood was a survivor of domestic abuse. Her husband beat her on a regular basis, breaking her teeth and cracking her ribs. She was finally able to attain a divorce – which was a lot harder to do in those days – and raised the youngest three of her children as a single mother.

After reading an article about the trail in National Geographic, Gatewood was inspired to attempt her own hike. According to her daughters, part of the reason Gatewood desired to trek the 2,000+ miles was because no woman had accomplished the feat solo. She is quoted saying,

When newspapers caught wind of the 67-year-old grandmother hiking the Appalachian Trail, naturally the story turned her into a national celebrity. Gatewood spoke to several journalists about her hiking experience and the terrible conditions of the trail. These comments spurned much-needed repair and restoration projects, turning the trail closer to the condition it is today.

Gatewood finished her hike in September of 1955, and then came back in 1957 to hike the trail a second time “for fun”. In 1964 she completed the trail once again, this time as a section hiker. She is the first person to hike the trail three times. 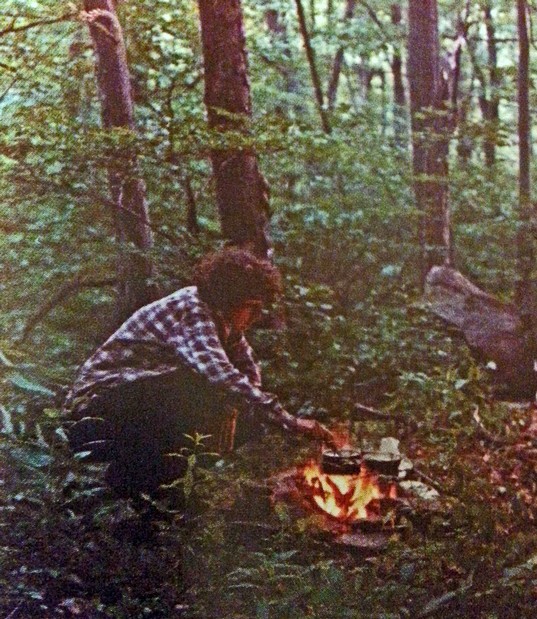 Dorothy Laker cooking over a campfire on the Appalachian Trail.

If Emma Gatewood made a spark, it was Dorothy Laker who stoked the flame. In 1957 – the same year Gatewood was attempting her second thru-hike – Laker put on her hiking shoes and hit the trail.

Laker was in her mid thirties when she set off from Georgia, and recently unemployed. She did not inform anyone of her plans to hike the trail. She was also explicit in stating that her journey was not a publicity stunt; she was hiking the trail for her own enjoyment. Laker was quoted saying she wanted to take her time hiking, and that it was “a folly to race through paradise.”

Supposedly Gatewood and Laker met in Pennsylvania, passing each other a few times during one day in July. Gatewood claims they “never a word to each other”; Laker doesn’t mention the encounter in her memoir at all.

After successfully completing her first NOBO hike, she went on to hike the trail twice more. She is the second person, after Gatewood, to have hiked the trail three times. 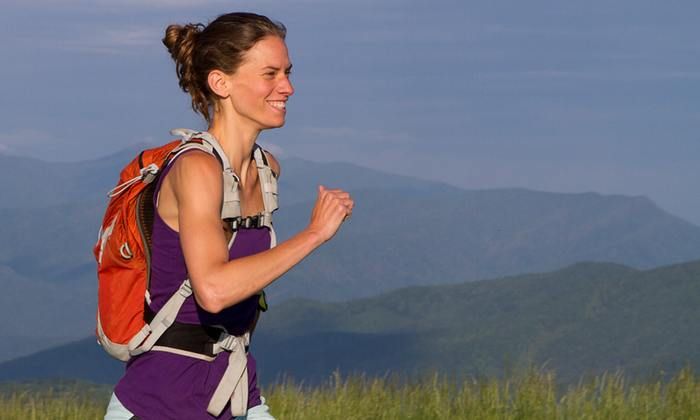 Jennifer Pharr Davis holds several hiking records, has written two books about her Appalachian Trail hikes, and is the founder of the Blue Ridge Hiking Company.

When she was 21 years old, Jennifer Pharr Davis undertook her first thru-hike on the Appalachian Trail. Less than a decade later, she became a legend on the trail and a household name in the hiking community.

Life would be much better if the speed limit was three miles per hour.

In 2008, she hiked the Appalachian Trail a second time, setting the women’s FKT record as 57 days and 8 hours. She also founded the Blue Ridge Hiking Company.

In 2011, Pharr Davis returned to the Appalachian Trail a third time, setting the overall FKT record (46 days, 11 hours and 20 minutes). She held this record for four years, until Scott Jurek beat it by three hours in 2015.

With this laundry list of accomplishments, it’s easy to see why Pharr Davis is such a prominent figure in the hiking community. Her journey inspired countless female hikers to hit the Appalachian Trail, and many more (male and female) to step outside and try hiking for the first time.

Side story: I met Jennifer during the 2015 Trail Days. She was absolutely lovely, even when I turned into a complete fan girl and gushed about how much I admire her. 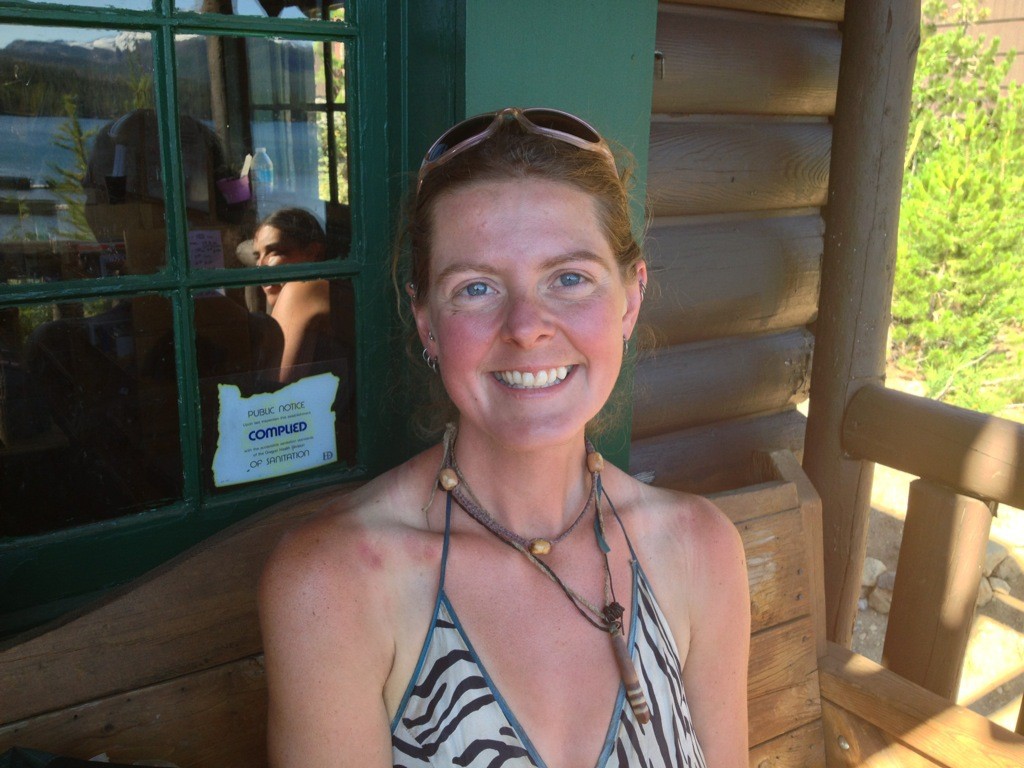 Heather Anderson, who goes by the trail name Anish, holds the self-supported speed records for both the Appalachian Trail and the Pacific Crest Trail.

While Scott Jurek was making media waves in 2015, Heather Anderson quietly put on her pack and set off from Katahdin. She walked quickly, often at night, flitting through the trees and hardly stopping to chat with other hikers. 54 days, 7 hours, and 48 minutes later, Anderson smiled for a photo on top of Springer Mountain. She had just beaten the record for the fastest self-supported thru-hike.

Anderson’s love for hiking began when she was at university. At the time she was considered unathletic, and struggled with her weight. During the summers she worked at the Grand Canyon, and upon graduation she decided she would hike the Appalachian Trail.

In 2003, Anderson started her hike from Springer Mountain with a gallon bag of oatmeal and no sleeping bag. Four months and a few gear adjustments later, she successfully summited Katahdin and completed her first thru-hike.

Anderson met her husband at the 2004 Trail Days, and together the two hiked the Pacific Crest Trail in 2005 and the Continental Divide in 2006.

The couple divorced in 2012, and Anderson began to search for a new challenge. In 2013 she set out on the Pacific Crest Trail a second time. She completed the hike in 60 days, 17 hours, and 12 minutes, earning her the record for the fastest self-supported through hike on the PCT. She hiked between 40 and 50 miles every day, wearing one of her trademark sundresses.

In 2014, Anderson attempted to break the speed record for the John Muir Trail, but came up short. The failed endeavor left her with self-doubt, and she wondered to herself: “Was the PCT a fluke?”

The answer came when she finished her hike at Springer Mountain. Anderson, like most hikers, wrestled with a great deal of anxiety and doubt about her choices to hike. But she pushed through them, showing just how much resilience the human spirit is capable of.

Later, she wrote this in a post about her hike:

I walk off of Springer Mountain, alone just as I came. My pack, my feet, and my heart are light, unburdened at last.

And, I am aware that the end of every journey is simply the beginning of the next and that, far from being behind me, the greatest achievements of my life lie ahead. 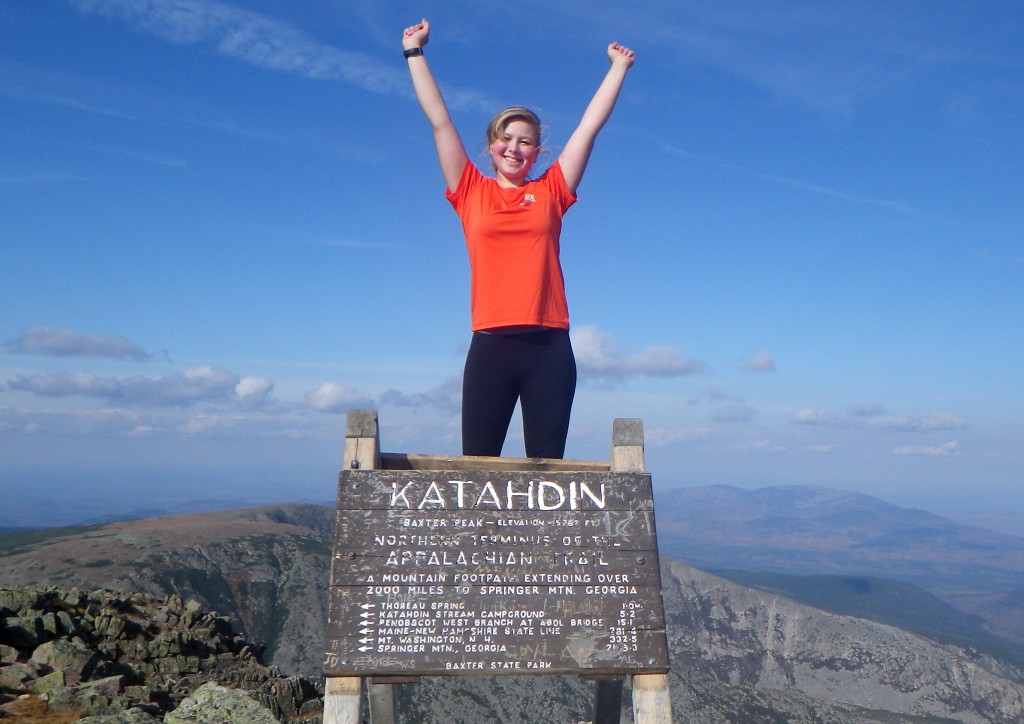 Neva Warren, who went by the trail name Chipmunk, is the youngest person to hike the Appalachian Trail solo. She was 15 years old.

If you think it’s difficult to convince your family of your hiking plans, try doing so at the age of 14. Most parents wouldn’t even consider letting their teenage daughter trek over 2,000 miles through the woods alone.

But Neva Warren’s parents did just that, and on October 22, 2013, Warren became the youngest person to hike the Appalachian Trail solo.

Six months and 22 days earlier, Warren set off from Springer Mountain. The hiking bug had bit her a year beforehand, during a 3-mile jaunt on the AT in Shenandoah National Park with her family. Warren had little to no hiking experience, and the first few days in Georgia were quite a learning curve.

Warren’s parents assisted her on the trip by driving to road crossings with their camper and meeting Warren when she had finished hiking for the day. Warren would use this as an opportunity to sleep and catch up on schoolwork. There were only a handful of times she slept in the woods on her own, but she still carried a full pack during her hike.

Warren admits to a number of mental challenges during her time on the trail, and that partnering with Hike for Mental Health helped her get through the journey.

Due to the threat of bad weather, Warren skipped ahead and summited Katahdin. She then returned to the point where she had left off and finished the trail. Warren was 15 years old when the completed her thru-hike.

As is usual with my history articles, I only scrape the surface of long and fascinating stories. If you are looking to continue reading about any of the women above, consider perusing the book list below.

Grandma Gatewood’s Walk: The Inspiring Story of the Woman Who Saved the Appalachian Trail by Ben Montgomery

*Dorothy Laker wrote over 200 pages of her experience in this anthology of hiking stories. Unfortunately, the book is out of print and used copies sell for a hefty price.

Called Again: Love and Triumph on the Appalachian Trail by Jennifer Pharr Davis