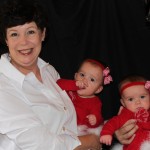 Bonnie Hedberg Karet is an amazing woman. Totally, incredibly, amazingly amazing! She is somewhere in Vermont right now, despite no backpacking experience prior to setting out from Springer on March 23. She has had her share of bumps, falls, and bruises. She has had more than her fair share of twisted ankles. It rained and was near freezing every day that she was in the Smokies. She still walks on, long after the “honeymoon” period on the trail. Like every AT hiker out there, the thought of a warm and soft bed every night teases her into questioning why she is wet, sore, muddy, and tired. But she keeps on walking. Her motivation comes from several places, but primarily from knowing that with each step, she is changing the future, one child at a time. 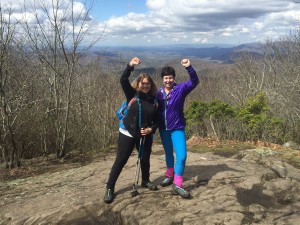 BonBon and Katwalk -Day 1 Atop Springer

Bonnie grew up all over the world; the only daughter of an American diplomat. Most of us think, “How romantic!” or “How exciting!” A better conjecture might be, “How scary!” I have never met Bonnie’s mother, but I am in awe of an American women raising a family in unfamiliar and developing countries, such as Liberia and Pakistan.

Returning to the U.S. as a teenager was hard for Bonnie. It was home, and yet it was such a strange place. She was American, but, in reality, the world was her home, as her father supported his country abroad.

Years later, friends of Bonnie’s were planning to adopt a child from Viet Nam. By then, Bonnie was the mother of three children and she travelled with her friends to provide support on such a difficult and emotional journey. What she saw and learned had a tremendous impact on her then and throughout her life.

BonBon at the Orphanage

I met Bonnie through trail journals late in 2014, prior to starting our 2015 AT hikes. We planned to start on the same day, and met in person at the Atlanta airport on March 22. From Day 1, we knew we were kindred spirits. Bonnie’s trail name is BonBon – which is what the children she met in Vietnam call her.

On that first trip to Vietnam in 2008, Bonnie learned what often happens to the parentless children who aren’t adopted. Children who are orphaned or abandoned when they are older are often considered to be unadoptable. They have lost hope of having a family of their own. Their fate is often to be victims of the sex trade once they leave the orphanages as teenagers. Bonnie and her friend Cynthia promised to return the next year and they have been back every year since. They established the Big Big World Project to help raise the money to help these older children learn a trade or go to college. Their success rate with each child they have helped is 100%. With a success rate as impressive as this, it is clear that with more funds, many more children could be reached.

BonBon has dedicated her hike to raise awareness and generate funds for Big Big World as well as for A Kid’s Place, a similar organization in the Tampa Bay Area.

If you would like to learn more, please go to https://www.bigbigwalk.com/#!about-me/c24vq
or https://www.trailjournals.com/entry.cfm?trailname=16820

Hey - I am an almost 60 something grandma looking to embark on the adventure of a lifetime when I retire. I know next to nothing about camping and just a bit more about hiking, so why not hike the AT to kickoff LIFE 2.0? I have been working in Corporate America for most of my (long) checkered career. Originally a New England girl, I will be hiking homeward, starting at Springer in March.