Stone Legs, the Australian who shuttled us from the drive-in theater, was at the park. He is working his way up the trail, making AT trail necklaces that he sells to tourist shops, and acting as a trail angel. He gave Hobble-It and I a ride back to the trail while Sonic went to retrieve his resupply box. We set off at a chill pace, yet the seven miles to the Connecticut state line flew by. Another state that I am visiting for the first time! A sign announced our entry into New England, where we will remain for the last third of the trail. 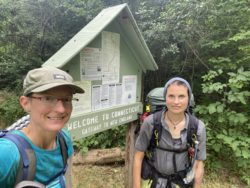 Serendipity invited all of us to zero at her house the next day. I felt a little rundown so I jumped on the offer. Sonic expressed interest and Hobble-It decided she could use a real rest day. Brad and Diane, whom we met at the creamery five days ago, hiked south to meet us. The six of us then hiked north, up Ten Mile Hill and along the Housatonic River. It was a lovely river and I was sad we couldn’t drink from it due to PCB contamination. 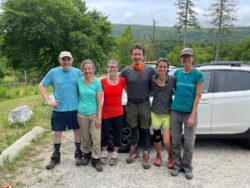 At Bulls Bridge road Brad introduced us to a New England feature, the covered bridge. The structure reminded me of an old-school underground mine tunnel. In the parking area, Brad and Diane had snacks and cold drinks in their car. We partook of their trail magic then Serendipity’s friend Sally gave us a ride to Norwalk.

Serendipity planned to use her car for our evening errands, but unfortunately it had a dead battery. We took an uber to REI then Whole Foods. I couldn’t find the food I was looking for and began to lose energy. I might have wandered forever in a daze, however Sonic and Hobble-It found me and helped brainstorm alternatives. Back at the house we ate a quick dinner and went straight to bed.

I slept well but woke early, congested and with a sore throat. My throat was slightly sore last night and I worried I was coming down with something… part of the reason I wanted to zero. Sitting up and clearing my sinuses, I slowly felt better. Sonic made strong, delicious coffee and Serendipity went to check on her car, which she got serviced. I washed vegetables and prepped kale then Hobble-It and Sonic cooked an epic breakfast. We ate eggs scrambled with vegetables, sliced avocado, and pan fried potatoes. 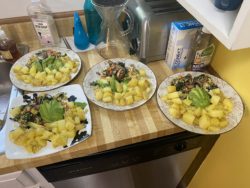 Next up was reapplying Permethrin, an insecticide, to our gear. I credit it and wearing pants as the reason I haven’t found any ticks on my body so far. We sprayed our clothes on the asphalt roadway and put them in the sun. By the time we came back from a couple errands they were dry.

We walked to the complex’s pool. The water felt refreshing and my body appreciated a different sort of activity. Serendipity commented that it was harder than usual to stay afloat. I’m sure we all have less body fat. Afterwards I sat on a lounge chair to dry in the sun and felt so relaxed.

In the evening we went to dinner at an Indian restaurant. I was slightly nauseous and didn’t have much of an appetite. Serendipity was concerned about rain the next day. We had intended on only one zero, but discussed if we needed two. I could tell my body needed more rest yet I didn’t want to hold the others back. I offered to return to the trail and take a second rest day there. My wonderful friends decided another rest day would be good for them as well.

I slept well, woke early, and remained in bed. With clear nostrils I practiced a slow breathing technique that I learned in Breath. When I got up I had only the hint of a sore throat.

It was the first double zero day that any of us had taken on trail. Almost immediately it began to rain, affirming our choice. We rested, ate, journaled, and enjoyed a nourishing day. The rain and thunder continued off and on, making us happy to be cozy indoors. I am so grateful for my tramily with whom I laugh and smile.

We had an odd breakfast of leftovers from the refrigerator. Then Serendipity’s friend Julia arrived at 7 am to drive us back to the trail. I felt ready to be back in the woods.

A brief road walk led to the usual climb that follows time in civilization. I spotted my first Connecticut red-spotted newt, yay! There were two more further along, likely enjoying ground still moist from yesterday’s rain. I listened to the Encanto soundtrack. Last night we watched the movie and the songs are catchy. I have become a big Lin-Manuel Miranda fan! 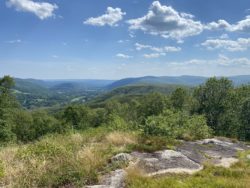 We had lunch at Mt. Algo shelter’s picnic table. I had a slight headache at lunch. My headache grew over the course of the afternoon and I felt nauseous, indicating a migraine. I stopped at a cold stream for water, dug ibuprofen out of my pack, and gave the medicine 30 minutes to take effect. The others joined me for a water break and we decided to shorten our day from 22 to 16 miles. None of us wanted to roll into camp at dusk, plus they were concerned for me.

It was a steep descent via St. Johns Ledges, large rocks that I carefully picked my way down. Then the trail flattened out to travel alongside the Housatonic River. We camped at Stony Brook Campsite. Despite the residue of my headache and nausea, I ate a good dinner. I was tired and went to sleep early.

The moon shone though tree branches when I woke from an excellent night’s sleep. The campsite had a wall-less privy, mostly hidden from view by a pile of logs. On the way back from it, I fetched my Ursack from the bear box. One by one we got an early start to beat the heat. Mid-morning I caught up to Hobble-It, who was hiking with All The Way. I was excited to see him again.

It was a hot day; the temperature eventually reached the low 90s. Out west that would mean damp armpits. Here my shirt became drenched in sweat as did my backpack shoulder straps. Several salt lines appeared on my shirt. Yikes, I can’t imagine choosing to live in a humid state! Still, I felt strong and recovered from yesterday. 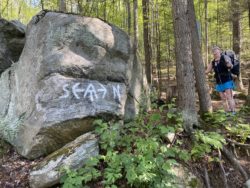 As it neared noon we came across very welcome trail magic: a box with snack size chip bags and a cooler with ice cold Gatorade and Powerade. We sat by the side of the road to enjoy our snack. It helped me stay properly hydrated. Then we climbed Mt. Easter before dropping to Sharon Mountain campsite for lunch. Sonic ate quickly then took off to Falls Village to bump a package forward.

After a bit of up and down, the afternoon was fairly easy. The trail meandered around a field, followed several roads, and went past a high school and hydroelectric plant. Sonic decided to camp in town for the night. I hiked with Serendipity. We climbed Prospect Mountain then came to the sign for Limestone Spring shelter. The shelter was a half mile off trail and there was an annoyingly steep portion to the descent. I had set up my tent and was making dinner when Hobble-It and All The Way arrived. Despite the heat we managed a 21 mile day.