Waking up in the ski lodge was one of the greatest feelings I’ve had a in a long time. I felt noticeably refreshed and eager to tackle the White Mountains—knowing I wouldn’t be doing it solo helped. Wake up time was 5:30, and I was surprised to see Margaritaville had already beaten me to getting up when I saw her already in the living room. The first shuttle to the trailhead wasn’t until 8:00, so we had a good number of hours before we had to be really ready. Everyone in the lodge eventually woke up, and we all spoiled ourselves to the gas station market next door that served great breakfast. A female hiker named WIC (Women in Charge) bought me a breakfast sandwich after she heard about my traumatizing day yesterday.

*Note WIC’s story that I will not disclose, but I would like to remember it for a long time. This is for future reference when I look back upon this*

Eventually it was time for us to say goodbye to the lodge and head back for the trail. Leaving was tough. I felt like I was saying goodbye to an old friend that had just talked me through a tough situation. The timing of this special place couldn’t have been more perfect, and I find it hard to convey my feelings attached to this place in words. The best way I can describe the connection I have for this place is the purple ski jacket that they gifted me. 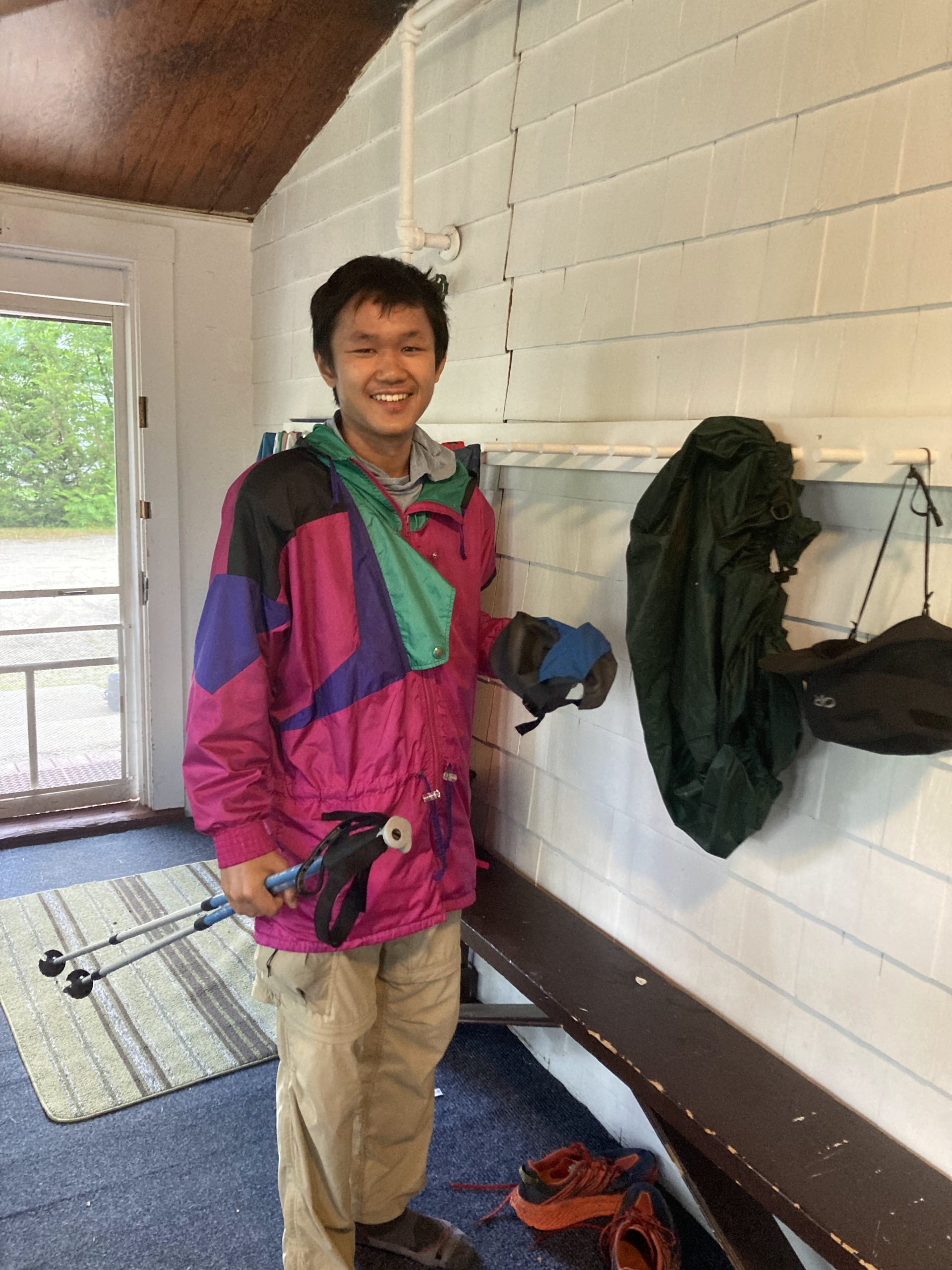 After I was shivering in the living room, Jen, the innkeeper, gave me her old ski jacket. It wasn’t necessarily a jacket that I would wear to keep me warm, but the kindness was accepted warmly. Before I left for the shuttle, I handed the jacket back to Jen, but she refused and told me to keep it. After trying a few more times to give it back, it was clear Jen wanted me to keep it. I wasn’t necessarily complaining because this stylish jacket, I knew, would be sure to turn heads on the trail. To show my appreciation, I told Jen I would summit Katahdin in this jacket. I couldn’t think of a better way to encapsulate the spirit of this lodge than this. 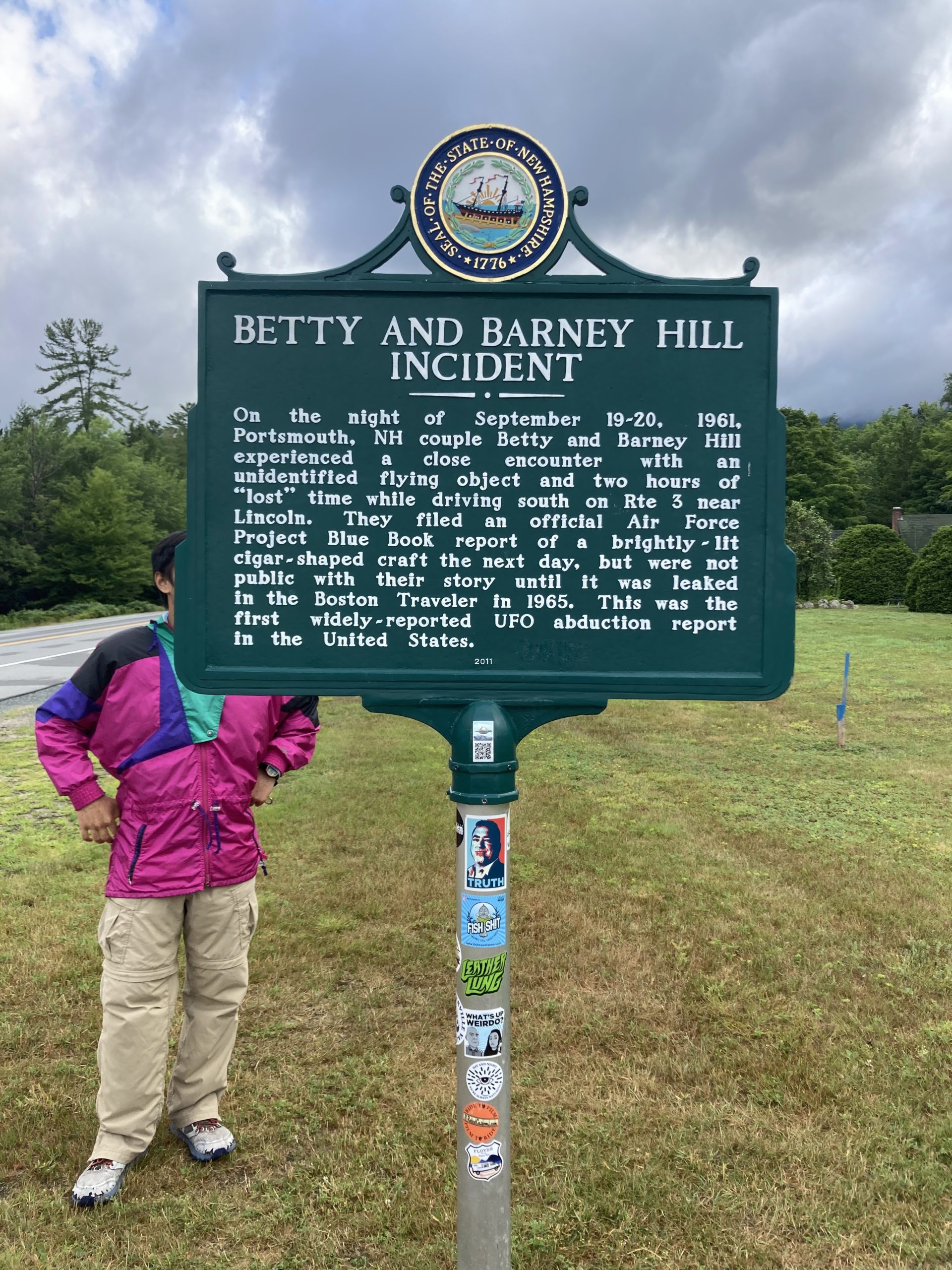 Jen and the other shuttle drivers stopped by this landmark sign to showcase of one North Woodstock’s claims to fame: the Betty and Barney Hill Incident!

Jackrabbit, Margaritaville, Peach Fuzz, and I got dropped off at the trailhead by 8:30 but had a 0.5 mile blue blaze to follow before we got back on the AT. We got to the AT by 9:00AM and began the ascent up to Franconia Ridge. The climb sucked. Grueling. Torturous. Masochistic. I quickly realized I was going to be the slowest person in this new group. We took a short water break at the Liberty Springs Campsite and talked with some day hikers who were brave enough to do this in wet trail conditions. At some point we reached the ridge and things flattened out. I put on my airpods and turned on some ACDC to give myself a little kick. Highway to Hell would eventually become the theme for the entire Whites.

We were now on the ridge and it was beautiful. There was still a dense fog from the amount of precipitation the day before but nothing could take away the grandness of the Whites. It felt like we were entering some sacred temple that was trying to hide itself from us. It had a mystical feeling to it that is still hard to describe today. Humbling maybe. Yes, humbling. I felt so small in contrast to the White mountains, and I knew from then on that I would not have the same agency on this trail than I did in states before. The trail was in complete control of my hike now. 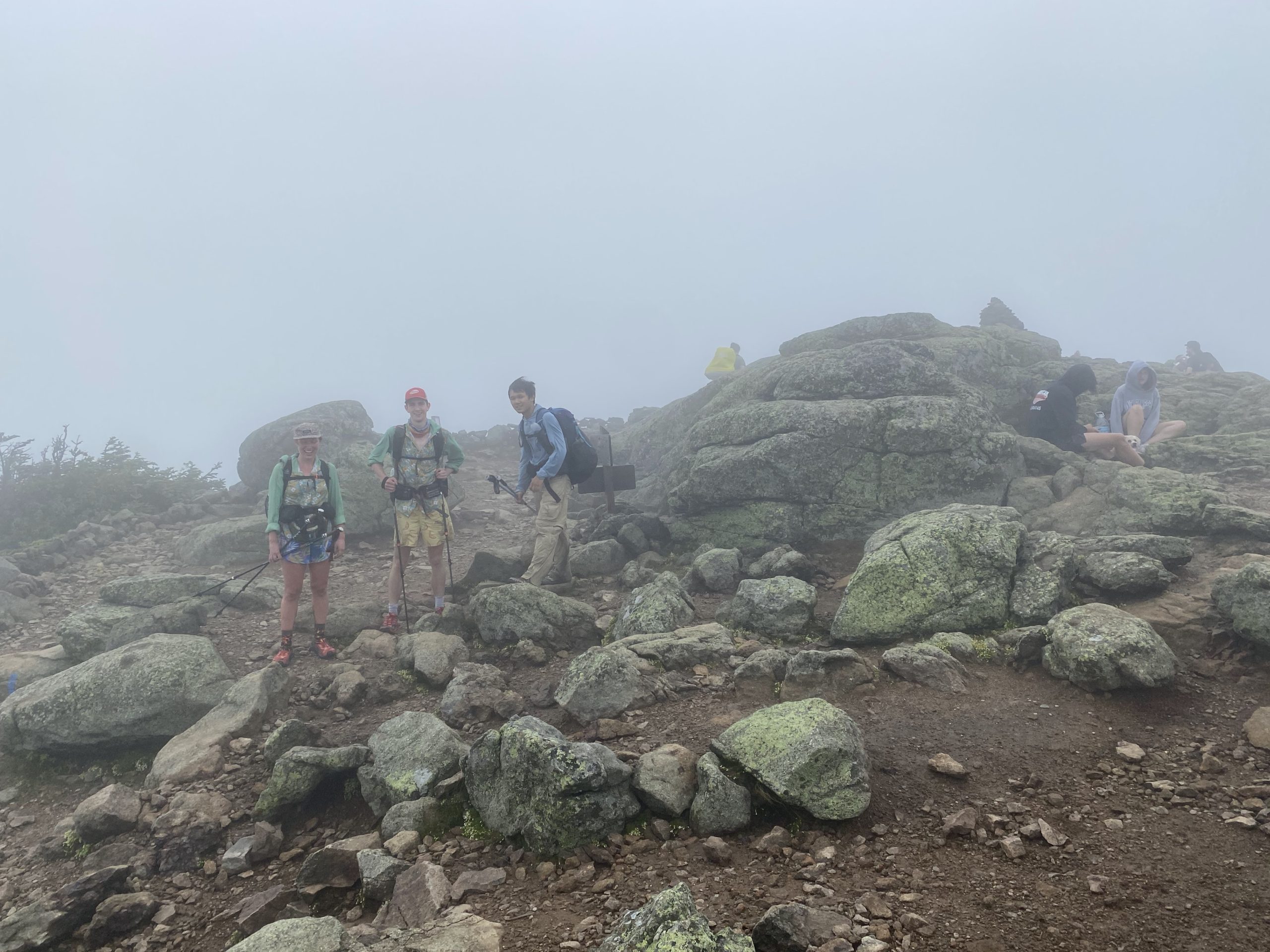 Margaritaville, Peach Fuzz, and myself! 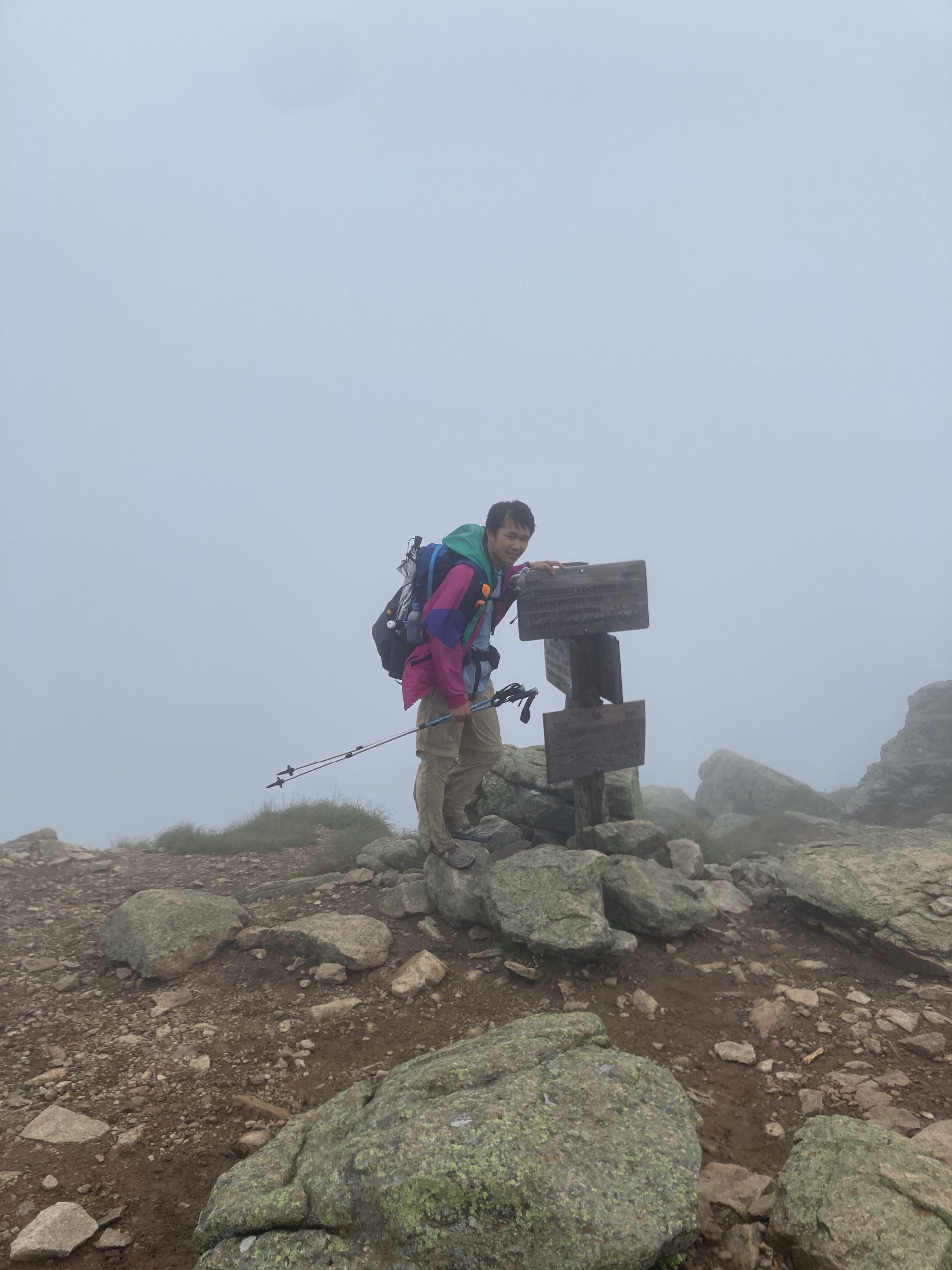 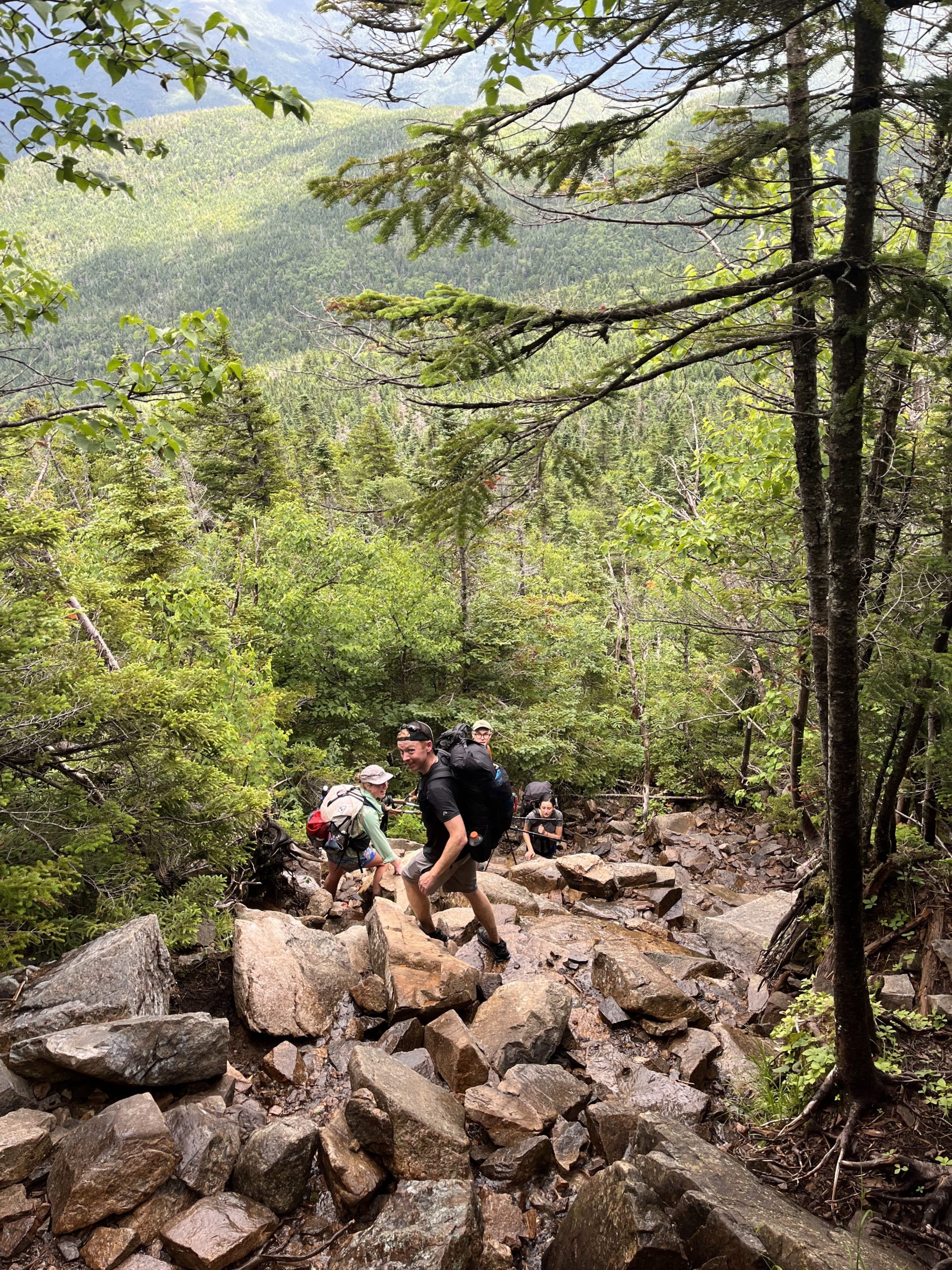 Jackrabbit looks back to say “isn’t this this nuts?!” Or at least, it looks like he is saying that. The descent down Garfield was a waterfall!

We hiked to the Galehead hut where we stopped for a lunch and a much needed break. Peach Fuzz bought a sub-par bowl of five bean soup from the hut (if a thru hiker doesn’t like the food that is saying something). We met a southbounder who was staying at the hut, and we regretfully asked him how the rest of Whites were. To this he said it was going to be brutal. He then proceeded to list every single mountain north of where we were. He kept naming mountains until Margaritaville rightfully interrupted him and told him to stop. We understood— New Hampshire and Maine were going to be hard. We started up South Twin and were pleased to find that it was quite an enjoyable ascent. I think we were getting used to these climbs. Personally, I found the ascents to be very fun. Learning how to control my breathing, choking up on my trekking poles, and making precise, meticulous steps were key to all of this. We all were just taking our time.

After going over South Twin and around Zealand mountain we now found ourselves at Zealand hut. The consideration to sleep at the campsite near this hut was discussed but Margaritaville thankfully recalled that Jennifer Pharr Davis wrote in her book that the next few miles after this hut would be extremely easy. It was very much indeed. 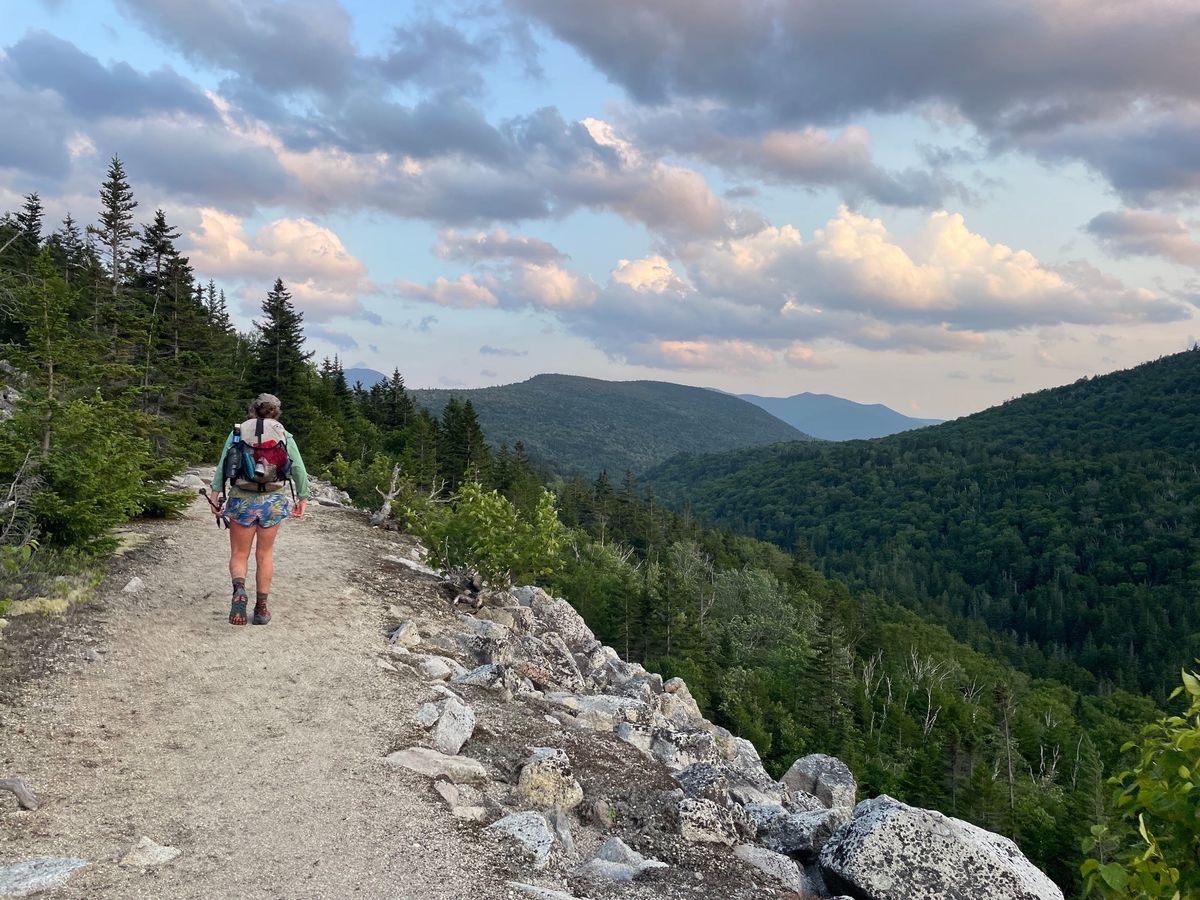 We made it to Ethan Pond Shelter at around 9:00 and were displeased to find a full shelter and tent platforms only. Jackrabbit was a hammock camper, so he found no trouble setting up his sleep system. Unfortunately us tenters found little space for us on the platforms. To make matters worse, we all use trekking pole tents which can be cumbersome to set up on wooden planks. I squeezed myself on a platform and set up an unstable, piss-poor pitch. Margaritaville and Peach Fuzz opted to cowboy camp on a platform instead of dealing with the hassle of a tent pitch. We all went to bed around 10:30, and I prayed that my tent would hold up. Great day. Just like everyday.