Hello world! In a twisted and complex series of events, my phone has broken and left me stranded as far as communication goes. I apologize for the lengthy delay in posts.

I’ve also been thinking quite a bit about the format of my blogs. The day by day is, quite honestly, boring me. So I’ve decided to do something a bit different. I hope you all enjoy it.

Ever since Troutville, I’ve been trying to catch up with  a few friends that I had met there. After the short day in the rain, Torch and I did a couple big days to catch them. The first day was a 21 miler, which went over 6100+ feet of elevation gain. I was exhausted after that, but got a great nights sleep, and was ready to hammer out a 23 mile day.

Along the way, Torch and I crossed the James River Foot Bridge. Dedicated to William T. Foot, the James is the longest foot use only bridge on the AT, The late Mr. Foot and his wife were the first people to thru hike the American Discovery Trail. The ADT goes across America from east to west. Basically, it’s a pretty big deal.  It’s also an AT tradition to jump of the bridge and into the river. So of course, since all my friends were doing it I had to. 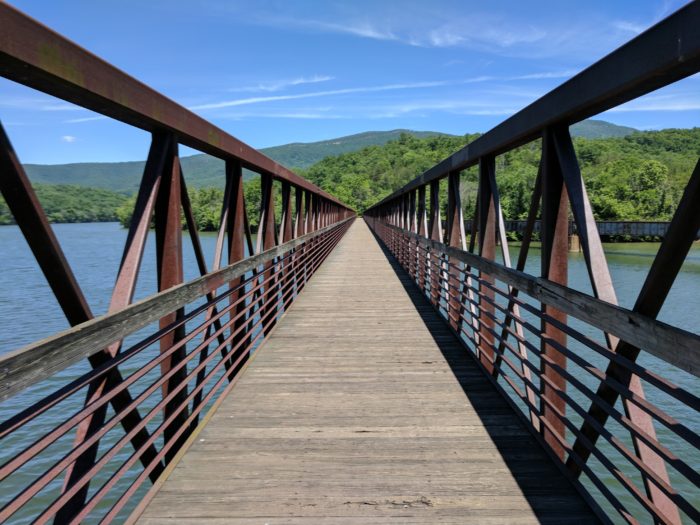 Later on, Torch got picked up by a hostel owner at a road crossing and stayed there for the night. I pushed on to a campsite a few miles past. As the trail opened up, I heard some familiar voices. “Caw!” I yelled. The voices returned the call. I’d found my friends! That night I camped with them, very happy to have finally caught up. 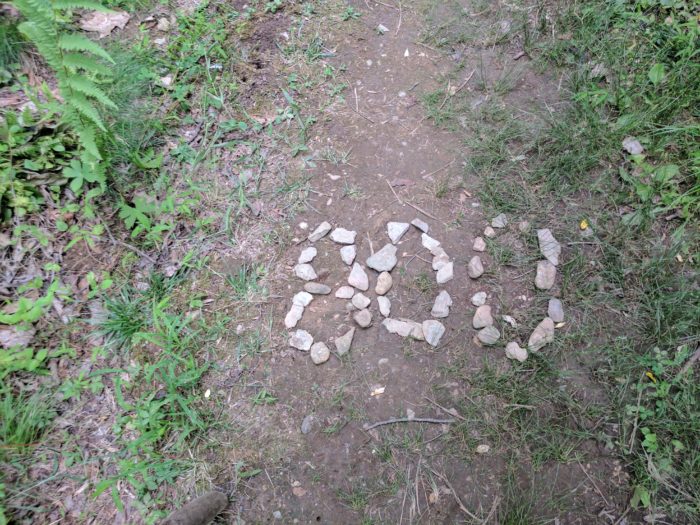 Before I get into this, let me just start out by saying that these people are wonderful people. We all got along very well, and I enjoyed hiking with them while it lasted. It didn’t last very long, but I do still consider them my friends.

I was really hoping that when I caught up, we could do just one short day. Just one. For some reason, I decided to open my big mouth and mention a hiker feast in Waynesboro three days from now. If we did back to back to back 20’s, we could make it. I think they were planning on doing 20’s anyways, but now there was a reason to. I remember thinking to myself, “this’ll probably kill me, but eh, should be good.” 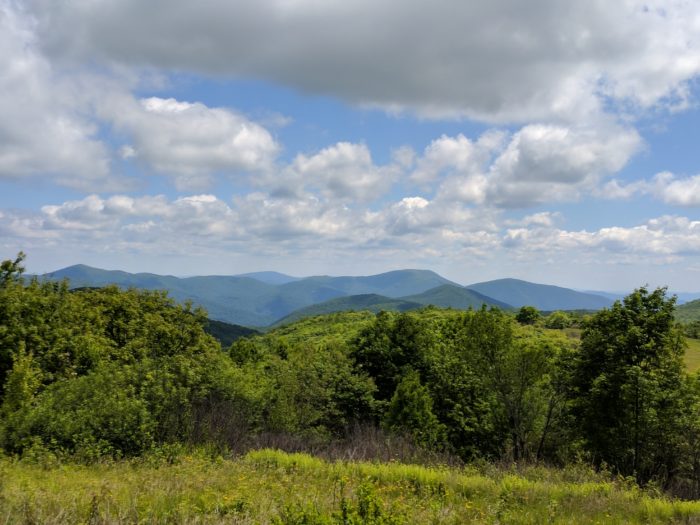 The first day wasn’t really that bad. We got a bit of a late start, and so made it to camp around 7:30. It was late for me, so I asked if we could get an earlier start the next day. My friends agreed, and so we got up at a normal time the next day to do another 20 miler.

This day started out just fine. I think I would have been totally ok with the miles we wanted to do, except for one thing. My friends liked to take really long breaks. For example, we stopped for a hour and a half at the Priest Shelter for lunch, and then again for another hour at this really pretty river. So by the time we got to 14 miles for the day, it was already 6:00. I don’t mind taking side trips and enjoying the moments, but I don’t expect to still make big miles when I do that. 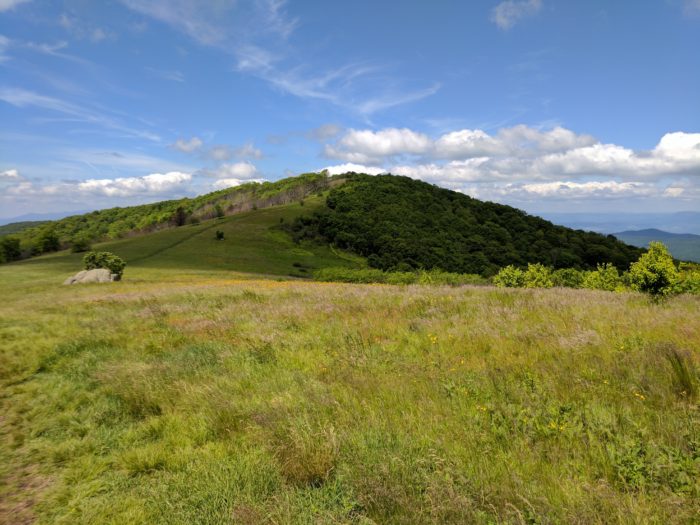 We stopped at a shelter and ate dinner.  My friends made it clear that they planned to move on and make the miles they had planned. I knew I would have a bad time with it, but I went with them anyways. I spent so much time trying to catch up with these guys, I didn’t want to lose them.

The next few hours we spent hauling ass up the Three Ridges. By the time we got to a westward facing ledge where we might have caught a sunset, the last dregs of light were quickly leaking out if the sky. My friends were going on about how motivating it was to catch the sunset, and how it would have taken us hours to get up the Ridges otherwise. 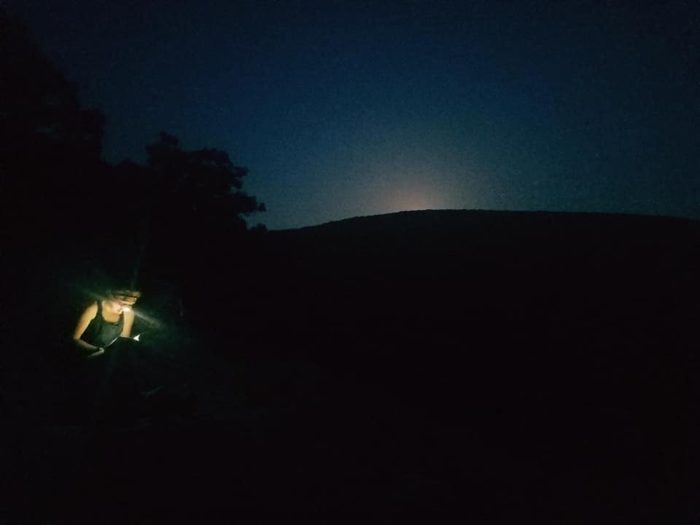 I was pissed, to be frank. It’s 9:00, we still have three miles to hike, my headlamp is dying, I’m hungry and tired, and I’ve stubbed my toe on every rock on the way up and down this peak. We didn’t make it to camp until 10:30. I set up my tent in silence and immediately went to bed.

The next morning I was just as quiet. Because of the late night, I had a late morning. I didn’t speak to either of my friends because if you don’t have anything nice to say, don’t say anything at all. I knew they planned to do another 20 miles. We also wanted to go to the Devil’s Backbone Brewery (Great spot by the way, I highly recommend it). We spent a solid two hours there.

I made the decision then, that I was not going to put myself in last nights situation again. My body has done so much for me over the past few months, it deserved a break. So when I had covered 15 miles by 7:00 I decided to stop 5 miles short of Waynesboro.

My friends had pushed on, and I don’t blame them. They should hike the way they want, and I’m going to hike the way I want. Yeah, I was upset that they just left me, but I also knew that the way they wanted to hike was just not for me. Everyone has their own way of hiking the trail and enjoying it. I get my enjoyment out of being there. Crushing miles is great every so often, but I also actually want to enjoy myself. I can’t enjoy hiking if my body is falling to pieces. This was probably one of the best choices I’ve made, but I was now completely alone. 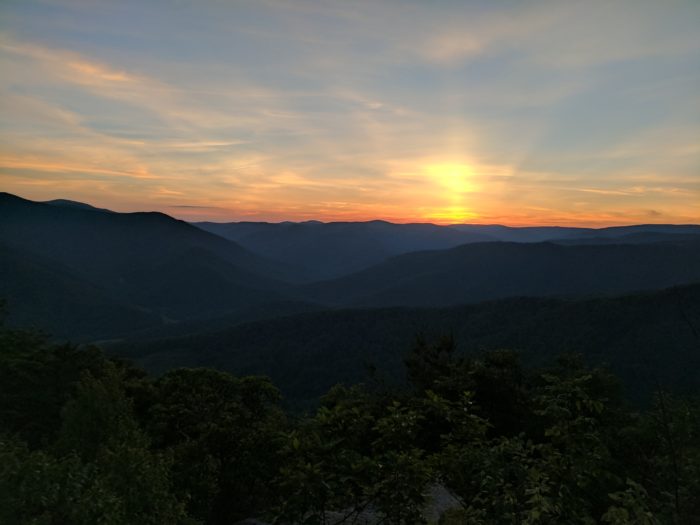 That night around the fire I tried to make some new friends. Suddenly I found myself in the middle of a conversation about acid verses shrooms. I, having no experience with either of those things, retired to my tent early. I felt so completely alienated around the rest of the thru hikers. How could I make friends with people whom I had nothing in common with? I consoled myself with the fact that I’d be in town tomorrow, and attempted to sleep.

I hitched into Wayensboro early the next day and made my way to the free camping area in town. After setting up my stuff and taking a shower at the YMCA, I decided to meet some of the other hikers I’d be camped with that night. I knew none of them, and at first they weren’t so bad. 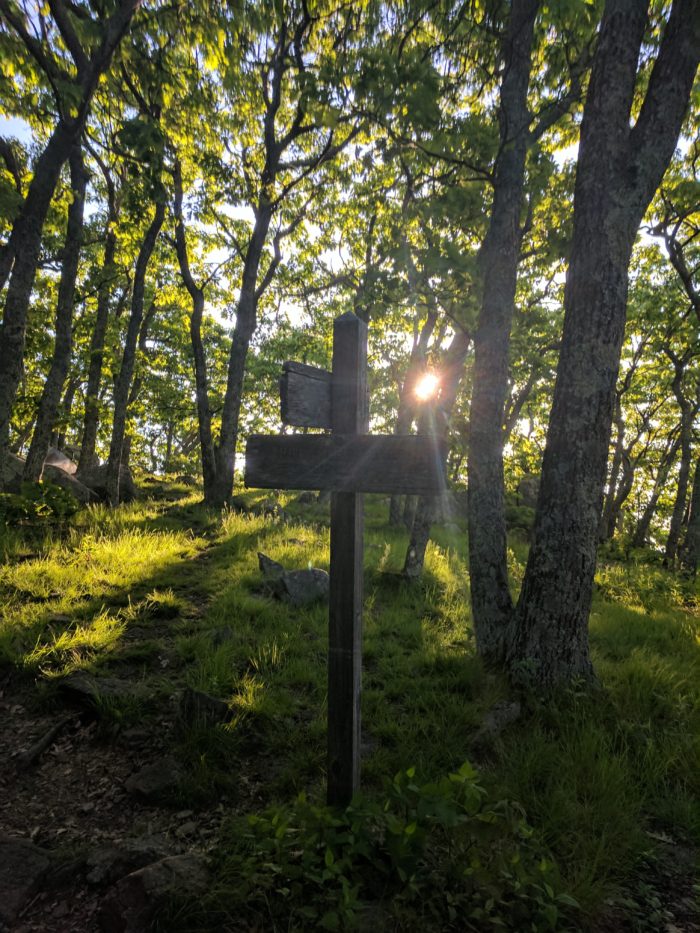 As the day wore on, I began to get some very persistent attention from another hiker. I made it quite clear that I didn’t want his attention, but he continued to try harder. Seriously dude, did you not learn what the word “no” means? Finally I broke. There was nothing I enjoyed about being around these people. I mentally threw my hands in the air and quit trying to make friends. As soon as no one was talking to me, I left the pavilion and went to the nearest bar.

HYOH and all that Jazz

People throw HYOH around a campfire like they throw away trash; constantly and without a second thought. It’s something I’ve said multiple times to people that have different ways of hiking than I do. Hey, hike your own hike, you do you boo. I never stopped to think that it should apply to me too.

Through all the time that I spent catching up and staying with these people, I disregarded how horrible I felt physically. The trail stopped being fun and started being work for days on end. In hindsight, I inquired of myself, why? Why was I voluntarily destroying my body? 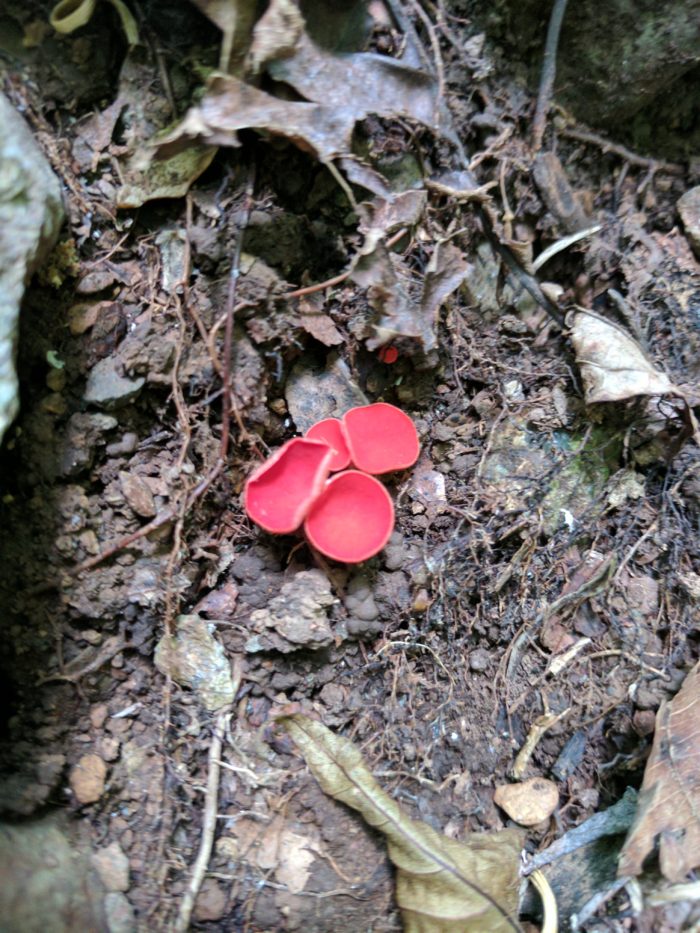 The answer was this innate fear that I have of being alone. Perhaps fear is the wrong word, actually. It was more like I got bored too easily when I didn’t know anyone around me. Either way, I put myself through hell because I didn’t want to be constantly surrounded by strangers. I had to make a choice between two comforts: the comfort of company, and the physical comfort of my body not slowly degrading. Physical comfort won out, and I dug my heels in and shortened my day.

If I’ve learned anything from this experience, it’s that people on the AT are similar to weather in New England. Don’t like it? Wait 5 minutes. The morning following the day that I went into Waynesboro, I bumped into Nemo, Inasias, and Peregrine. Three people whom I thoroughly enjoyed being around. So, luckily for me, I was not as alone as I thought I’d be. 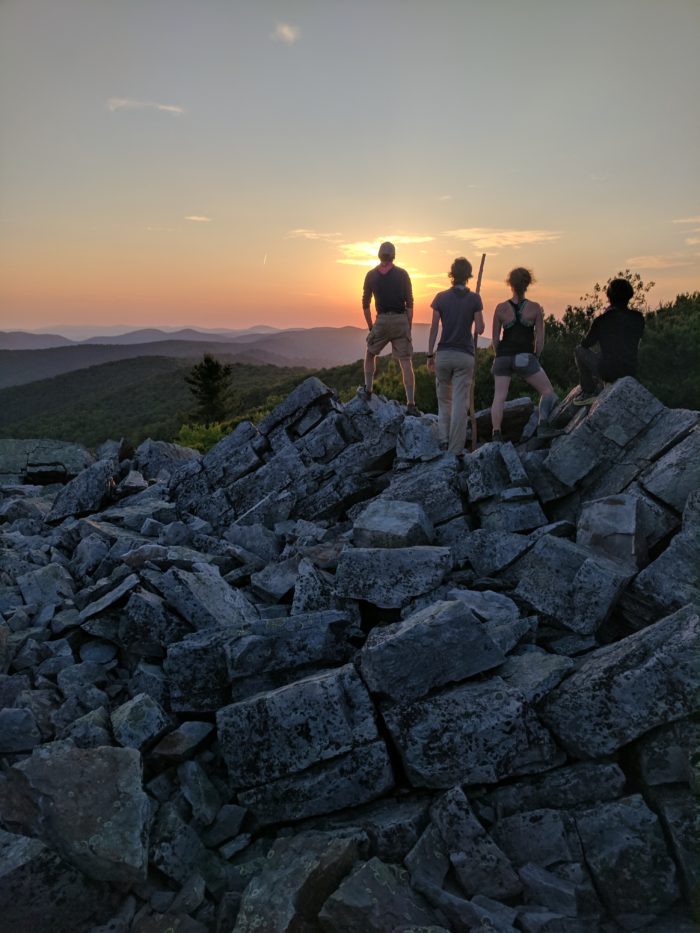 Peregrine, Inasias, myself, and Nemo

This experience also helped me better understand what HYOH means to me. I did come out here solo, after all. Sometimes I’m going to have to let go of groups I’d been hiking with, and that’s just a part of the trail. Another hiker put it better, “A large part of it is learning to appreciate transient friendships.” People come and people go, they have their hikes and I have mine. Sometimes they line up, and that’s great. Other times they don’t, and you’ve just got to know that it’s ok.

If you would like, you can follow me on instagram at erica.runs or shoot me an email at [email protected] PLEASE NOTE THIS CHANGE. I can’t access my other email because phone trouble. So if you sent me something this is why I haven’t replied. Please especially note this is your trail name is Sweeper.