Some switch has flipped and I’m sporting a new normal. I shower about once a week whether I need to or not. I’m asleep by 8:00 pm and on to move as soon as I can talk myself out of my bag. I’m walking 9 hours a day. I’m eating two lunches because one just doesn’t seem enough. I seem to have lost 32 pounds. Reagan was President the last time I weighed this much.  I’m no longer on a long dreamed of adventure…I’m simply doing what I do every day.

When I left Daleville I thought I would have to go into Buena Vista to resupply. A fellow traveler turned me onto a better option. The Three Springs Hostel is awesome and I don’t think either of the trail books comes close to capturing the full extent of their awesomeness. They will pick you up at either US 60 or Hog Camp Gap. Their refrigerator/freezer offers many options to satisfy your hiker hunger and the breakfast is first rate. While they would have shuttled me into Buena Vista at competitive rates, I was able to resupply from their well stocked shelves. If that isn’t enough, guests have the option of slack packing from US 60 to Hog Camp Gap. 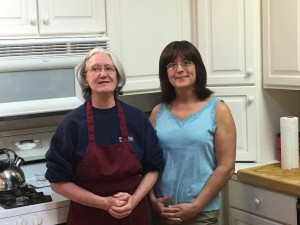 The wonderful ladies at the 3 Springs Bunk and Breakfast

The fire in the Shenandoah National Park has my plans up in the air.  Waynesboro has organized shuttles to ferry hikers to the other side of the closed section.  I’ve also heard that you can hike to the closed section and there you are directed to an alternative route.  Since I was planning to take a much needed zero here, I may just wait until Friday morning to decide what to do.  Since I’ve done this section at least ten times, I think I should be able to take either option without putting an asterisk on my thru hike.

I left Daleville on a cold Saturday  morning.  In an hour, it started to snow pretty hard.  (Here is a little peek!)  I was layered up and comfortable, but a little freaked out.  It’s April and snow just seems wrong.  I stopped at Fullhardt Knob for lunch and found Dysfengshuinal getting a late start.  We ended up sharing shelters several times over the next few days.  Could she be my trail sister?  The twentysomethings with 700 miles under their belts I generally only to see once.

Three days out of of Daleville, I stopped at the Bryant Ridge Shelter for lunch.  A young Baylor grad named Giggles treated me to three slices of pizza. Bryant Ridge is a beautiful shelter. It’s timberframe construction makes it a work of art. 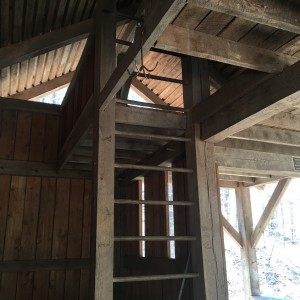 While the Bryant Ridge Shelter was tempting, I went onto to Cornelius Creek where Giggles rewarded me with another slice.  Giggles is a hoot, but as one of those twentysomethings, I’m unlikely to see her again.

The next day, I just wasn’t feeling it. I just did 5.3 miles to the next shelter. There was a group of four friends who were doing the AT in one-week sections each spring. I pitied them as I know that their journey will always be difficult. They will never achieve my new found acceptance of life on the trail. 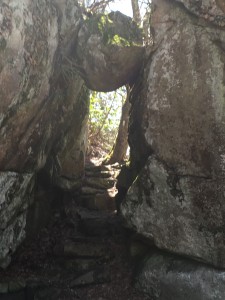 After a night in the Matt Creek shelter, I crossed the James River and climbed to the Punchbowl shelter. 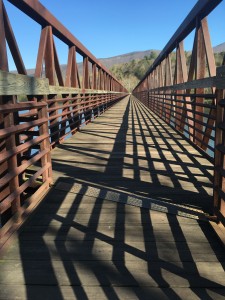 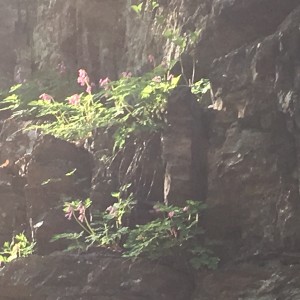 Bleeding Hearts near the Foot Bridge

While I start each day with an objective mind, I try to not have any expectations of actually achieving that goal.  All miles aren’t created equal and I am 65.  On one of those days I ended up stopping at the Priest Shelter instead of Harper’s Creek.  Otis of insane skunk fame caught up to me there.  We howled at Giggles confession in the log.  Although her claim to have slept with hundreds of men and even a few women made Otis feel as if he had somehow missed out on something, I assured him that he was included in Giggles’s impressive total.

Otis is an interesting case.  He carries a five pound bag of sugar and routinely adds a quarter cup or so to oatmeal and his Hawiian punch.  He’s much more in touch with how many calories he’s consuming than I am.  Maybe I can learn something from him.

The next day I suffered the consequences of stopping at the Priest.  From there the trail descends 3000 feet to the Tye River and then climbs 3000 feet to the top of Three Ridges. I wasn’t able to make the Maupin Field Shelter and ended up Cowboy camping on top of the Three Ridges.  The almost full moon shined like a spot light for most of the night, but after it had set I was treated to the night sky in all its glory. 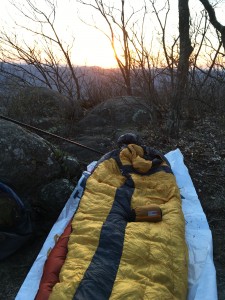 Sunset on the Three Ridges

This left me 17.8 miles to Maupin Field Shelter.  Didn’t make that goal either and ended up cowboy camping after walking a couple of hours after dark as the batteries in my headlamp faded.  Guthook’s App saved me by directing me to a piped spring and a tent sight.  This left an easy eight mile hike into Waynesboro this morning.

Doubt stalks me like a pack of wolves on long uphill slogs.  I’ve learned to suspend all internal dialog by concentrating on whatever audiobook I’m listening to.  The silence holds them at bay.  While I’ve essentially lost the weight of my pack in my first month on the trail, when going uphill I seem to seek the same level of discomfort when climbing.  Will I eventually lope uphill with the ease displayed by Giggles or one of the other kids? Who knows…