A rose by any other name…

I’m going nuts waiting to hit the trail. I’m continuing to tweek my gear, but I could be out the door in an hour.  Base weight is down to 18 pounds.  The first week, I will carry no more than four days of food.  This will put my loaded pack at around 28 pounds.  I’m waiting for grandson to make the transition full time childcare.   He’s on pace to get there in early March.  I have a honey do list to take care of and need to file my taxes before I can go.  I’m working on both.  My fantasy baseball draft is March 18th. I’ll leave the day after that!

I’ve been thinking about trail names a lot lately.  For the uninitiated, on the Appalachian Trail, hikers often adopt and new name.  While ideally I believe that the trail will provide, I’m doing a flip-flop starting in southern Virginia and really don’t expect to have much company the first month or so.  I’m starting there because I’ve done most of Virginia and I thought it would be best to get the part I’ve already done out of the way first.  There is also a  horde of hikers starting at Springer on my start date.  I plan to start where I began my first AT section hike in 1997.  First night out on that hike, I shared Knot Maul shelter with a couple of incredibly hot college girls.  After dinner it started to rain, my ancient Svea stove was on the picnic table.  One of these women said, “Sir, your stove is getting wet!”  I’m happily married, but her sir-ing me put me safely in the old man zone way before I wanted to go there.  I became Sir Old Fart on that trip as her Sir sounded more like Old Fart to my ears.  She should be pushing forty about now. Perhaps one of my former students will ma’am her. Karma is a cold hearted bitch.  Maybe I should be Sir Old Fart again, but that name seems more a part of that trip than this one.  Then I wasn’t really ready to be an old fart, now I’ve embraced it.  Should I let the trail provide or take charge and pick my own trail name?  I’m thinking that my odd flip flop may mean I’m pretty much on my own until Harper’s ferry. Maybe it’s best to just pick one?  Here are some options that I’ve been thinking about.

O.G.:  Short for Old Growth as in, “No one should have to look at my old growth timber on Hike Naked Day.”  Hike Naked Day, another AT tradition, falls on June 21st.  I should be in Massachusetts by then.  The trail seems to go through a lot of little towns where the legal authorities may not fully appreciate trail traditions.  There are enough Big Foot sightings there already.  Old Growth holds out the possibility that old dogs can learn new tricks too.

Homer:  Let’s face it… I look more like Homer Simpson every day and the other Homer wrote about epic journeys.

Reboot:  I’m walking in trail runners and expect to go through four or five pairs. I’m also looking for a metabolic reboot. It doesn’t seem fair that at 20 I could easily eat a large pizza without gaining an ounce and now I gain weight if I smell a slice.

The Dude or Lebowski:   If I hadn’t managed to talk my wife into marrying me almost 35 years ago, I would have been the Big Lebowski.  No question!  One doesn’t often get to see what his life would have been like if he had chosen another path.  When I saw that film, I clearly saw the road not taken.  I should think the Dude’s mental outlook would be helpful on the trail, however.  The Dude abides!

Gramps:  I’ve earned the title in the real world; why not on the trail? 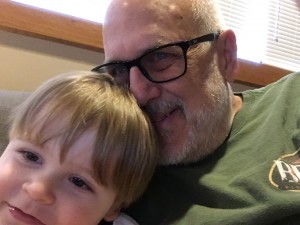 Haiku:  After the limerick, haiku is my favorite type of poetry.  I can see leaving a string of haikus in trail journals.  Let’s face it, haiku even sounds like it should be about hiking.  Some will almost certainly end up in this blog.

I’m probably going to use one of these, but if the trail names me later on, I would be open to the change.

As to other trail traditions…Weasie’s in Waynesboro used to have a pancake challenge.  Thankfully they have ended this tradition.  I love Weasie’s…love their pancakes too, but I’m a huge fan of their biscuits.  Hikers traditionally celebrate reaching the halfway point by eating a half gallon of ice cream.  My spork and I are going to be all over this even though I will only have done a little over a quarter of the trail at this point.  Brain freeze, be damned, I’m in!   I’m really looking forward to reading the trail journal in the Priest Shelter.  There hikers traditionally confess their sins.  I’ve heard most have to do with masturbating in some shelter or another.  Personally I believe that the length of the human arm is proof that this is probably part of God’s plan and therefore not all that sinful unless you wake up your shelter mates.

When we moved to Brooklyn, I drove up I-81 in Virginia.  When I go to the West Virginia border and realized how densely packed the states were packed here, I tried to hit four states in less than an hour.  Some hikers try to hike the same four in one day.  While I expect to pull some big days out of Harper’s Ferry, I’m not going to lose any sleep trying to do this and I’m certainly not going back to the Virginia border to nail down the fourth state.

I’m reading another very good trail memoir.  Crazy Free: An Epic Spiritual Journey by Melissa Wyld is an excellent book.     As a result of Melissa’s spiritual journey her approach to the trail seems closer to worship.  Her reverence for the trail is illustrated by how she treats her water.  She scoops it into her bottle, hugs it to heart and says, ” I love you, please don’t make me sick, thank you.”  While I can’t take her approach to treating water, reading this book has made me rethink the way I think about this journey.  The trail will be my lover.  I will savor every sensuous curve of her.  I will love her in all her moods and accept all of her gifts with joyful reverence no matter what form they take.  As in all relationships, there will be rough patches.  I’ve been married almost 35 years; I’m not going to ditch at the first sign of trouble!  I’m in this relationship for the long haul.