For those of you who were not – it was cold.  And windy.  Snow and ice rained down. I heard later that they closed 441 from Gatlinburg to Cherokee for two days.

I was on top of Clingman’s Dome, the tallest point on the AT, on one of the coldest, windiest days.  There was a half inch of ice on the ramp up to the top of the lookout tower.  Of course, you have to go to the top of the lookout tower.  The ice hung heavily on the tree branches; you had to either duck under them or  nudge them out of the way, which resulted in an ice shower. 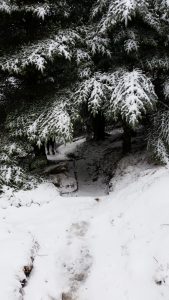 Because it was so cold, I decided to do Newfound Gap to Standing Bear in two days, and overnighted at TriCorner Shelter, which was packed out, people sleeping on the ground out front, but a good spirit as we shared the experience. The ice and snow refroze overnight, and it was very slippery leaving TriCorner.  Slip slidin’ down the trail (without falling!) I tweaked a couple of tendons.  But someone had predicted, correctly, that as we lost altitude, we would go below the snow line.  Sure enough, the afternoon trail was clear, the temp  warmer.

About two thirds of the way down I spotted this critter, two steps before I would have had a close encounter.  Somehow I think I backed up 20 feet without touching the ground.  I hike without my hearing aids, so I couldn’t hear the warning it gave.  But I saw the rattlers vibrating.  Of course it was on a very steep hill, and no way to bushwack around the thing.  It took me 5 minutes or so to get up the nerve to slowly step around it with about a 5 foot space. 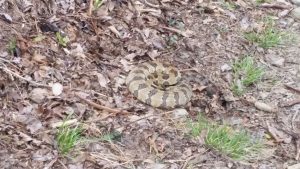 I knew that Bald Eagle and Hoodie were 10 minutes behind me, and that one of them hiked without their hearing aids.  And if they were like me, they were probably so relieved to be below the snow and ice line, enjoying the almost warm weather, that they could have their own close encounter.

So I waited for them.

Sure enough, they didn’t see the snake until I pointed it out when they were 10 feet away.

We agreed: no way should you have to battle snow and ice in the morning, and dodge rattlesnakes in the afternoon!

That is our shared catastrophe.  Cold weather and a rattlesnake.  Whenever I run into those two on the trail, they tell others that I “saved them” from a rattlesnake.  Wish I’d gotten their picture with the snake.

But we were too rattled.

Trailname - Pitchit. Newly retired, went for a walk in the woods on the AT March 21, 2017 on a Supported Thru Hike with my wife, Tidbit. I'd sectioned about 60% of the AT; found out I'd done the easy parts! In 2009 I broke my ankle between Lafayette and Madison in the Whites; but the rest of NH and south Maine were harder! I made it 2070 miles when a stress fracture on my right, 3rd metatarsal sidelined me. Close. Will go back to finish the unfinished part in Maine in 2017.