A Tale of Two Privies (Part 2)

Before I get to my nomination for the Best Privy on the AT, Mid-Atlantic region. let me make one thing clear.  In my opinion, nothing beats modern plumbing.  I absolutely love it.  The inventor of flushing toilets (Sir John Harington in 1596) has my undying gratitude. So while I’ve been extolling the virtues of a couple of privies I’ve come across recently on the AT, I’ll take a real bathroom with hot running water any day.

That said, there are privies…and then there are privies.  On the AT they range from odor-reeking huts that test your ability to hold your breath to composting toilets filled with refreshingly fragrant wood chips.  But since so many privies seem to fall on the disgusting side, I thought it worth recognizing the good ones I’ve seen during my day hikes on the AT.

If you missed it, here is the link to Part One, the runner up.

So without further ado, my top contender is…Raven Rock Shelter in northern Maryland. 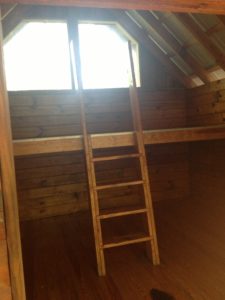 Entrance to the loft 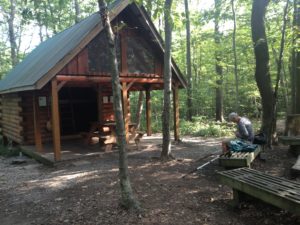 This shelter is so pretty it looks like a ski chalet.  It’s a modern, two-story structure with an attractive metal roof, an immaculate lower level, and an ample sleeping loft with huge windows on two sides to let in lots of light.  There’s a covered picnic area right outside, and enough tent sites, benches, and fire pits scattered across the grounds to accommodate quite a crowd.

The only thing I thought it was missing at first was a bear-bag pole.  I searched everywhere to no avail, surprised that such a great shelter would have skimped on something so vital.  Most shelters I’ve seen so far at least have a basic pole for hanging up food at night. 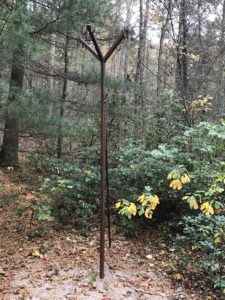 And then I spotted it soaring above me – a 50 ft. long cable system suspended between the trees.  About twenty feet off the ground, it has big baffles to keep out the squirrels and pulleys to make it easier to hoist up bags.  I was in awe.  Of course, it made me wonder why the builders felt they needed to construct such an elaborate system to protect our food (exactly how many bears are out there?), but it impressed me nonetheless. 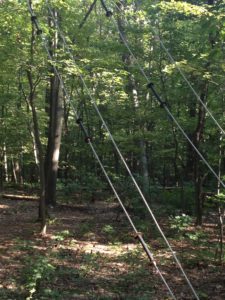 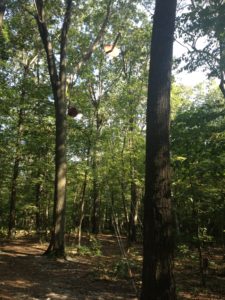 Baffles on either end.

The builders also put some thought into the privy, an elevated structure located behind the shelter.  The first thing I noticed was its size.   Most privies are so tiny they’re ridiculous.  (I understand they’re meant to be basic, but come on!  Would it hurt to add another foot in each direction to give us room to turn around?).  This privy was bigger than most.  It also had lots of open spaces at the bottom and top for ventilation.  Hurrah!  To access it, you have to walk around to the opposite side – which is when I discovered that there is no opposite side.  That’s right.  It’s completely exposed.  You walk up six steps to “the throne,” then do your business in the open air.  Luckily, I had my husband with me to act as a lookout in case another hiker came along, but I still found it rather disconcerting.  Did the builders forget to install the door?  Or did they design it like this on purpose?  Either way, I have to admit that it works.  The open concept definitely takes away any smells.  And, as a bonus, it has a lovely forest view (maybe so you can keep an eye out for all those bears?). 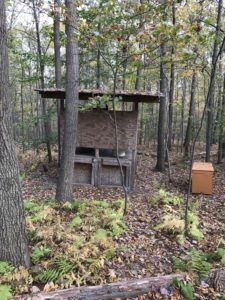 The backside of the privy. 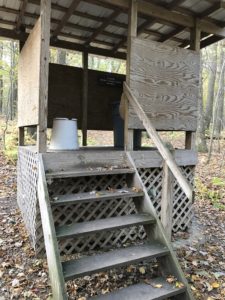 So that’s it.  My nomination for Best Privy in the Mid-Atlantic Region.  It certainly isn’t the Ritz.  There’s still not a flushing toilet, let alone a towel warmer or jacuzzi tub.  And I’m definitely not looking forward to using it in the dead of night.  But it’s better than most and has that coveted forest view.  I just hope I don’t see any bears! 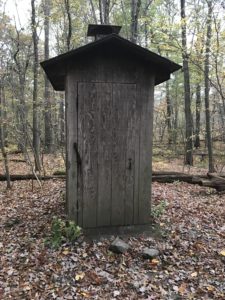