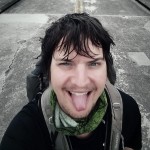 The air was cold as I awoke on the hard wood floor wiping the sleep from my eyes to greet the morning. Fellow hikers stirred in the dining area of the Lakes of the Clouds Hut in New Hampshire, they too had taken advantage of the work for stay option the previous night. While this morning began like many others, it was the beginning of a day far from typical. Today was the day we would summit Mt.Washington. Known for having extreme weather and the highest recorded wind speed on the planet we were all a bit wary to hear the previous night that a storm was headed our way. The clouds lifted from the hut that morning exposing the rolling hills below. It was with urgency that I packed my gear and headed for the door to take advantage of the break in the weather. I opened the door to the frigid air burning my cheeks. Scattered rain drops were still falling from a storm that had just passed. I turned to the hut for one last look to see a beautiful double rainbow over the valley. For a moment I didn’t notice the cold as the immense beauty of what lay before me warmed my soul. I snapped a picture and proceeded to hike up the mountain. 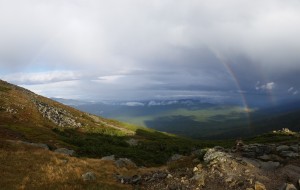 A short walk from the hut I pass a sign that reads “STOP The area ahead has the worst weather in America. Many have died there from exposure, even in the summer. Turn back now if the weather is bad. White Mountain National Forest”. Ominous clouds loomed over the peak, I suppressed the anxieties swirling through my mind and marched on. It was about a half mile before the peak that I reached a wall of clouds. The day transformed into a gray dream like realm which made me feel like a space explorer traversing an extraterrestrial landscape. In the gray void CJ, a fellow hiker, had caught up with me and we hiked onward to the summit together. With winds howling and rain pelting our bodies four giant metal structures emerged from the fog.

We sought refuge in a building that resembled a bomb shelter more than a visitor center and were soon joined by the rest of our friends. The visitor center was very accommodating, it had a snack bar, gift shops, a little museum with interactive exhibits, and even a resident cat named Marty. A man working the gift shop counter told us about the “Century Club”. It’s a tradition for the new employees to walk around the observation deck in 100 mile an hour winds without falling over or touching the rails to become a distinguished member. I also spoke with a park ranger about the task of doing rescues, during which time he pointed to a plaque on the wall that had a list of names along with the cause of death as a grim reminder of the harsh conditions. The last name on the list was typed on to a piece of paper and taped on from the current year. Out of nowhere a loud horn sounded. I didn’t realize what it meant until I saw the Cog train chugging through the clouds bringing passengers from the base of the mountain to the summit. 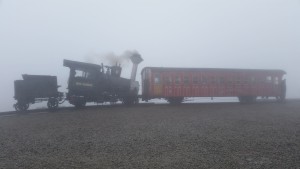 People exited the train and I could see most of them were not dressed in the proper attire to deal with such inclement weather. As tourists filled the visitor center I wrapped up my conversation with the park ranger. “So do you think it’s safe for us to hike out into this today?” I asked. “Yea you should be fine, the winds are just below gale force” he replied with a grin. He showed me that at the base of the mountain it was 60 degrees and sunny yet at the summit it was 36 degrees with 42 mile an hour winds and 75 feet of visibility. With one last pit stop to the gift shop to buy a pair of gloves we prepared to brave the 5.7 mile hike to Madison Spring Hut. Clark Kent, CJ, and I agreed that it would be best to stick together for this next section, so, wearing every article of clothing I had, we stepped outside.

The door opened and the winds roared as if we were inside of a tornado. I imagine the conditions being similar to riding a motorcycle in the freezing rain with no helmet. The rain struck like needles across our faces forcing us to focus intently toward our feet in a feeble attempt to shield our eyes from the rain. After a brief stop to pose for pictures at the summit we headed down the mountain. 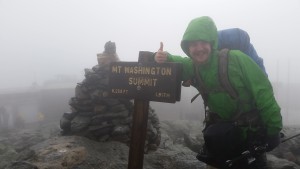 It wasn’t long before we reached the tracks of the Cog train that cut right through the trail. As fate would have it the Cog just happened to be coming back up the mountain giving us the chance to uphold the age old thru hiker tradition of mooning it as it passed by. However, after hearing that flashing your rear at the train could end up landing you on a sex offender list, we opted to merely bend over and shake our rears at it instead. The train traveled up the rails and disappeared into the mist leaving us void of civilization once again. The trees marked with white blazes that once lead the way were a thing of the past, all that was left were 4 foot tall cairns made of loose stone to guide our path. We’d reach one pile of rocks and scan the edge of visibility through the storm looking for the next. For hours we walked through what seemed like an endless sea of cairns until there was a sudden break in the clouds. The sun burst through warming our bodies and revealed a serene view of the landscape below. We rejoiced in the moment, as fleeting as it was. Not 10 minutes had elapsed when clouds rolled over the mountains like a tidal wave. Already soaked to the bone this next wave of rain felt even colder than the first. The rain formed ice crystals in my beard and on my body. I started to feel my fingers and toes going numb and knew that frostbite was a real possibility. It wasn’t long after that I noticed Clark Kent and CJ were no longer with me.

I knew CJ was ahead and that Clark Kent was behind so I stopped to wait for Clark. After about 5 minutes I began to worry thinking she may have wandered off the trail. I pulled my whistle out and blew into it over and over hoping that if she had wandered off she could hear it and find her way back to me. 10 minutes had gone by and I knew that if I didn’t keep moving hypothermia was an imminent threat. Just then she appeared over the ridge being blown from side to side. “Where were you?” I yelled over the howling wind. “I had to go to the bathroom” she replied cooly, unbothered by the cold hell that was overwhelming the landscape. “Well let’s go, we’re going to freeze to death out here” I said. It was 4 hours from when we left the summit that we finally reached the Madison Spring Hut. Walking through the door we received looks from guests like we were from another planet and based on how we looked, I don’t blame them! Soaked through and probably as pathetic as one could look I asked if they had work for stay available for us. They asked how many people would be showing up in total and I explained there would be 5 total assuming the 2 we left back at the summit would make it. We were told that they don’t usually take more than 3 people. However “There have been gusts of 91 mile an hour winds reported so we won’t make you go back out into that”. The young man replied to our relief. There were 2 section hikers with a dog that were not so fortunate as the hut has a no animal policy and had no other choice but to hike a mile down a side trail to a camp site. We hung our clothes on very crowded coat hooks to dry and huddled under our sleeping bags while eating soup and drinking tea to warm us. After a game of monopoly and a home cooked meal we sprawled our sleeping bags out in the dining area and drifted off to sleep as the wind rattled the windows and shook the walls. We had conquered Mt.Washington.