It rained a bit overnight but the inside of my tent was relatively dry. I felt restless due to my low phone battery, and was eager to get into town to charge my phone and talk to my family. I woke up a couple times throughout the night, thinking I should pack up because it felt like morning was right around the corner, only to realize it was only midnight or 3:00 AM.

I finally got up around 5:30 and started packing things up. It was warmer than I expected from the rain, so pack up went quickly. I shoved my poor wet tent into the bag, fetched my sopping food bag from the tree, and headed out in the dark fog around 6:30. Even though the trail was right off the shelter, I scrambled around in the darkness for a few minutes before finding it. The fog was making my headlamp useless for more than 2 feet in front of my face. I finally found white blazes, but a recent storm blew over a couple large trees obscuring the trail. On a normal hiking day, you’d easily be able to see around the trees, but in the dark, the small path other hikers have made to circumvent the trees seems like the new trail leads down the mountainside. It was slow going but the sun slowly decided to show itself after a little while of me scrambling in the dark.

The elevation was relatively flat, so the morning went by easily. It was raining but relatively warm (no ice sickles on the trail). I knew I’d have to go over Albert Mountain that has a fire tower on top, but I wasn’t keeping track of my mileage closely, so after going over a few small mountains I’d wondered if I missed the fire tower. Then I came to a clearing with a dirt road and across the way, I saw a white blaze on a rock on the mountainside. I thought that was strange, so as I walked over to it and the fog cleared, I looked up. There were white blazes on the rocks going almost straight up the mountain. It was still raining and the rocks were littered with wet, slippery leaves. I stood at the base of the mountain for a minute getting rained on, just staring at what I was about to attempt.

Half climbing half scrambling up the foggy mountain was the first time I felt unsafe hiking. I was alone, and if I slipped and fell off the mountain, it’d be a while before my injured body or corpse was found. I carefully arrived to where it leveled off, took a sigh of relief/pride, took a few steps and promptly slipped and fell on my butt. I turtled around for a bit trying to stand up with my pack weighing me down, and was glad no one was around to see me struggle. 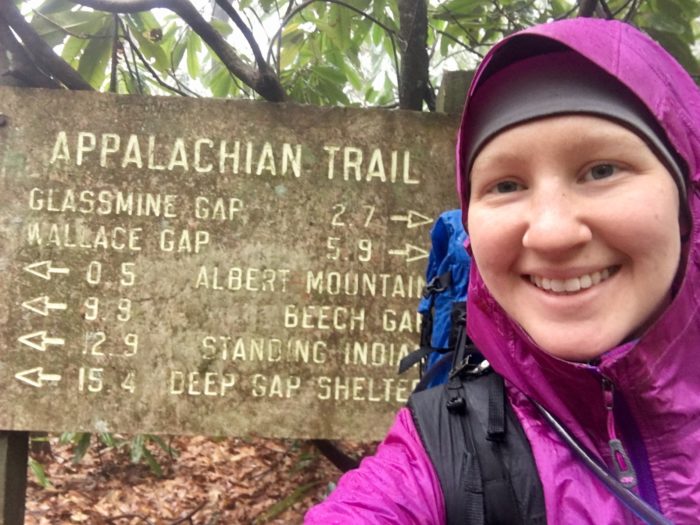 I finally got to the fire tower and the view was nothing but fog 20 feet in front of me. I watched a bird taking a bath in a puddle for a few minutes, and continued on a few tenths of a mile to the 100 mile mark. The rest of the hike was pretty flat and went quickly. My plan was to stop at Rock Gap and get a ride into town, but Engine, Caboose, T-rex, and Acorn caught up and were going the extra 3.8 miles to Winding Stair Gap, so I tagged along. Caboose was favoring her foot, so we plodded along slowly to the pickup site and sat in the rain for a few minutes waiting for the shuttle.

Getting to the motel, showering, and changing felt amazing. We took a trip into town for groceries and ate Chinese and sushi for dinner. In the evening I splurged using my phone as much as I wanted, knowing a charge was right across the room. We stayed up to a super late 11:30 (way past hiker midnight) before turning in. 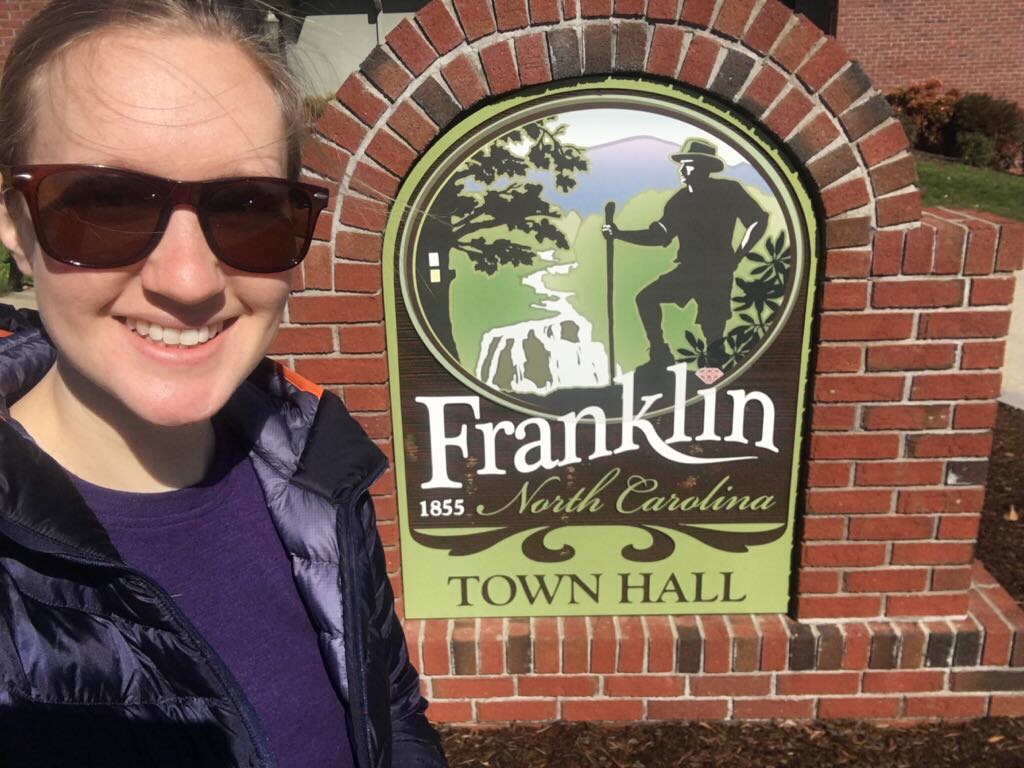 Even though we stayed up late, we all woke up around 6:30. We hung out for a bit chatting, and then the crew headed to breakfast while I headed to the post office to mail Louis some things I wasn’t using. I went to the outfitter store (Outdoor 67) to see about getting an attachment for my hydration hose to fit on my smart water bottle. They weren’t open for another 30 minutes, so I went across the street to a bakery and had a homemade eclair and coffee. 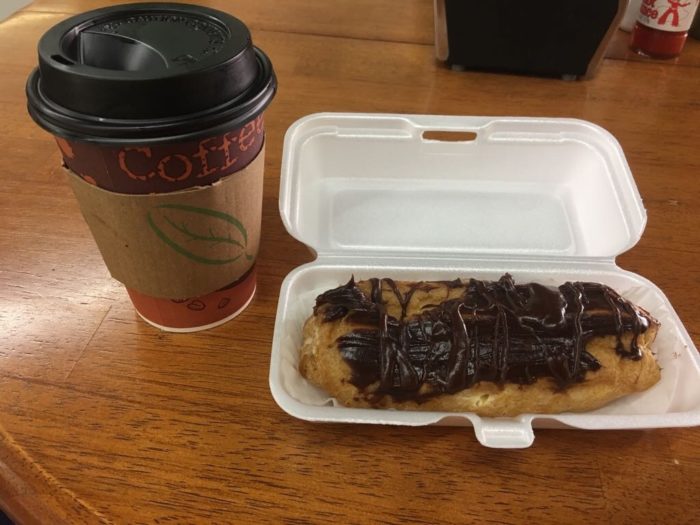 The outfitter guys were amazingly knowledgeable. They specialized in foot care, and I knew Caboose would be by later to have them check out her foot. I headed back to the motel and wondered when my packages would arrive. It was still morning, and as soon as my packages got here I could head out on the trail. I called the hostel where I had them sent and sadly learned that packages don’t arrive until 3:00 pm! Oh well, more time to hang with Engine and Caboose and the rest of the crew. 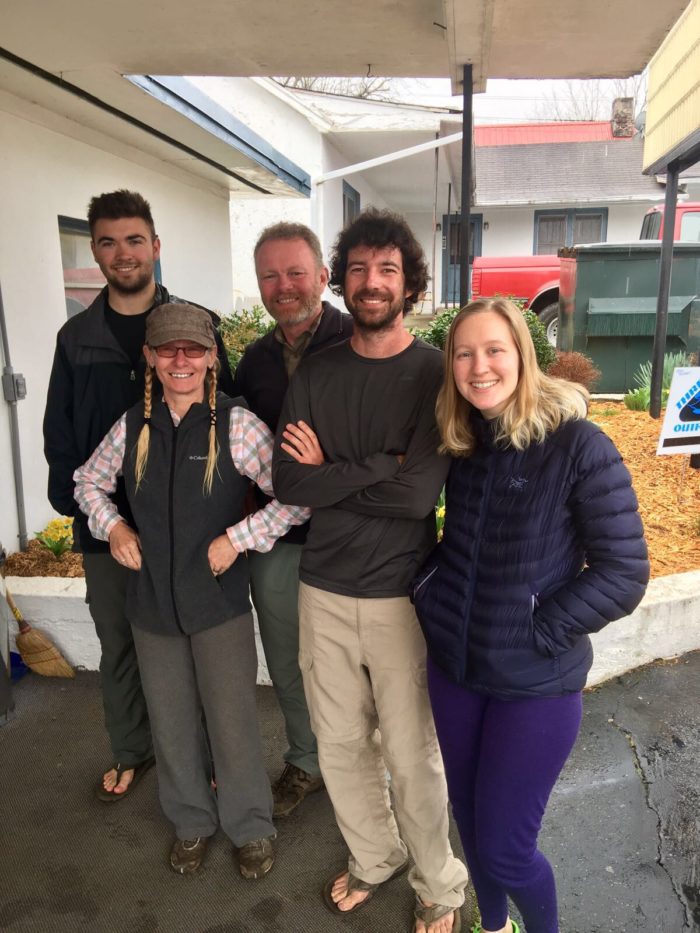 Caboose and I talked for a few hours. It was therapeutic to talk to another girl. The trail is predominantly men, so I was getting some girl time in while I could. The rest of our group was planning on zeroing today so they could rest/heal injuries, so I was the only one planning to hike out today.

My plan was to grab the 4:00 Walmart shuttle and have them drop me off at the trail, so I headed over to Gooder Grove hostel where I sent my packages around 3:00. It’s a 15 minute walk, so as I was walking up the driveway, I saw the van driving away. I flagged them down and they said they were going to the grocery store quickly and to make myself at home.

The hostel was a little rough around the edges on the outside, but beautifully done and clean on the inside. I thumbed through old hiker yearbooks and found Dixie (Homemade Wanderlust on YouTube). Most girls hiking the AT know and have watched Dixie’s videos.

I had already missed my 4:00 shuttle, so I was getting anxious about getting back to the trail before dark. When the two guys from the van walked in, one of them sounded and looked really familiar. I stared at him for an uncomfortably long amount of time before I realized I had seen a bunch of his hiker videos (Hiker Trash on YouTube). Not only did I see Dixie in the yearbook but now I get to meet Terry Coyle? He took a short video of me saying why I wanted to do the trail. What a cool end to the day, even if I did miss my shuttle. 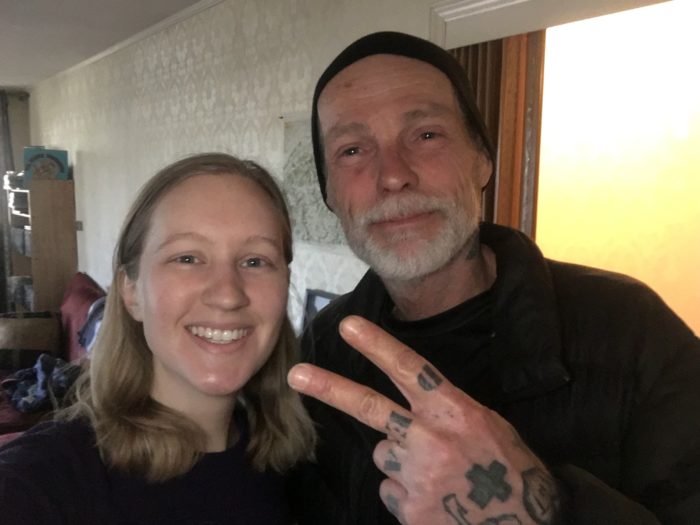 Me with Hiker Trash (Terry Coyle)

I got back to the motel, and even though it was late, I was determined to get back on the trail tonight and get some miles in. I had wanted to try night hiking, so tonight seemed like the perfect opportunity. I found a brighter headlamp than mine in the hiker box so I took it along for good measure. I asked Spoonman, a previous hiker who does shuttles for the Budget Inn, if he would run me over to the trailhead, and he gladly agreed. I said my sad goodbyes to Caboose with the hope that we’ll catch each other on the trail again.

After Spoonman dropped me off, it was close to 6:00 pm. There was still light out but it was going away fast. I got everything adjusted, turned on my GPS and off my phone, and headed into the woods. The light lasted a surprisingly long time. Dusk came and went, and by 8:00 it was actually starting to get dark-dark. I had my newly acquired headlamp on my head just in case, but I didn’t turn it on right away because the moon was so bright. It was a full moon 1.5 weeks ago and the moonlight was so bright it was casting shadows on the ground. I could have read a book out in the open with no problem. I had heard about how bright full moons are for night hiking but I was shocked how much I could see throughout the forest.

Despite the moonlight being bright, I was pretty nervous. I was alone in the woods at night, isn’t this how every horror movie starts? I sang loudly to myself to alert any critters of my presence and to make me less nervous, but quickly ran out of songs I know by heart as I exhausted Christmas and Sound of Music songs. I relaxed a little after I survived the first few hours without any bear maulings or serial killer kidnappings. 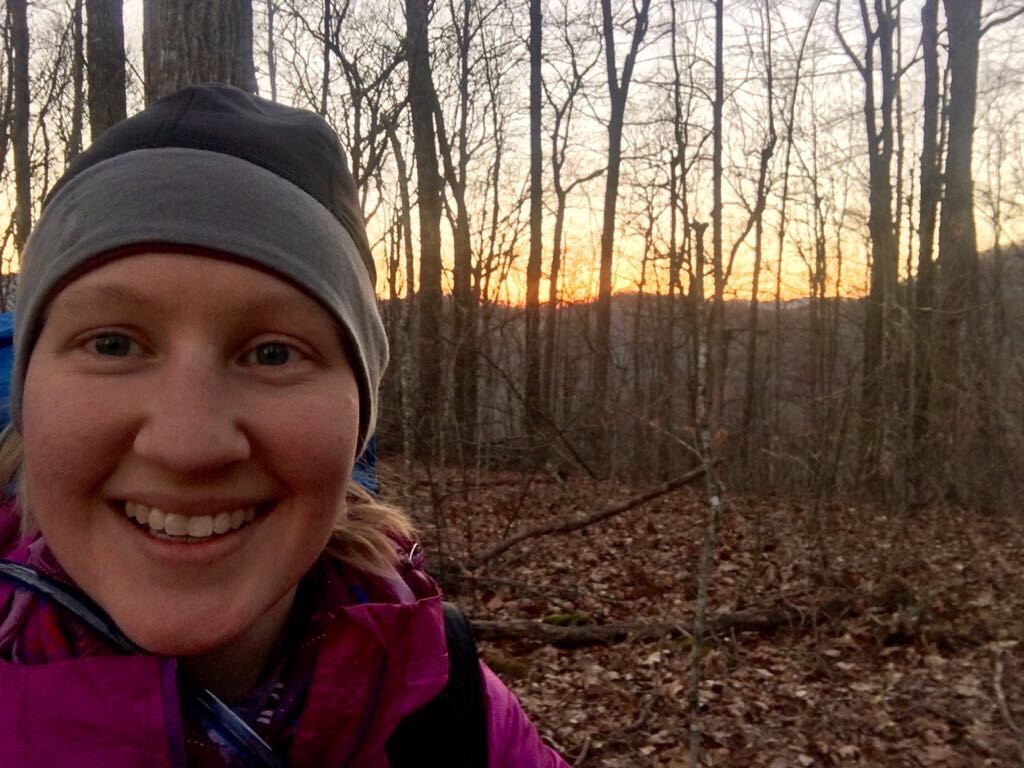 I used my headlamp briefly when big trees cast shadows on the trail, because unlike daylight shadows where you can still see the ground, moonlight shadows you see nothing in the shaded area. I also found that you can’t see small streams running across the trail by moonlight (it just looks like normal ground). Not wanting wet feet, I turned on the headlamp for those areas. While the moonlight lit up the whole forest, the headlamp only lit up the 10 feet in front of me and obscured the rest as it reflected off the trees. I felt much more nervous when my headlamp was on because I couldn’t see anything on my periphery making every leaf crunch made me spin around looking for the culprit (which was me each time).

My original plan was to see if I could make 10 miles to Wayah Bald shelter, but after a little over 8 miles with the last 2.5 miles walking uphill on nothing but horrible baseball sized rocks that are suicide on hiker feet, I tapped out at the campsite near Wine Spring Road, 2 miles from the shelter I was trying to get to. I got in a couple minutes before 11:00 pm, set up my tent, and lay down only to have the moon shining down in my face through my tent. I covered my head with my sleeping bag so I could get some rest.