Civilization everywhere! I felt like a tourist, not just walking from Maine to Georgia, but walking as a means of transportation between predetermined tourist destinations. 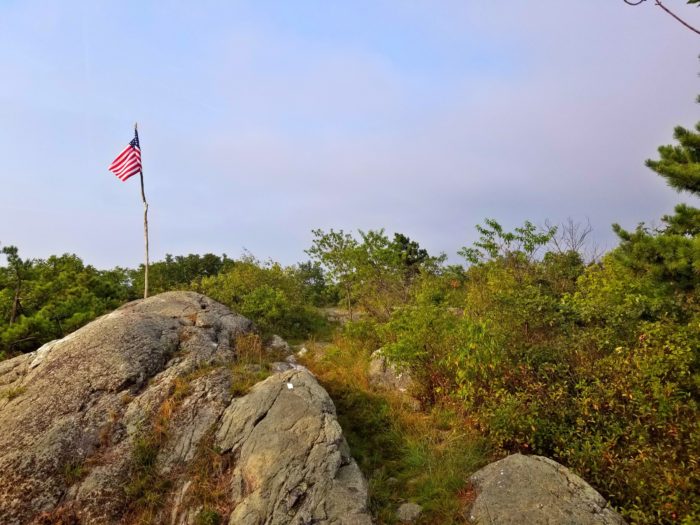 Yes, I am in America.

It was a state full of day/weekend hikers and places to eat along the trail. Funny how those two go hand-in-hand. I basically felt like I was in Central Park for the majority of the state… hence the title. 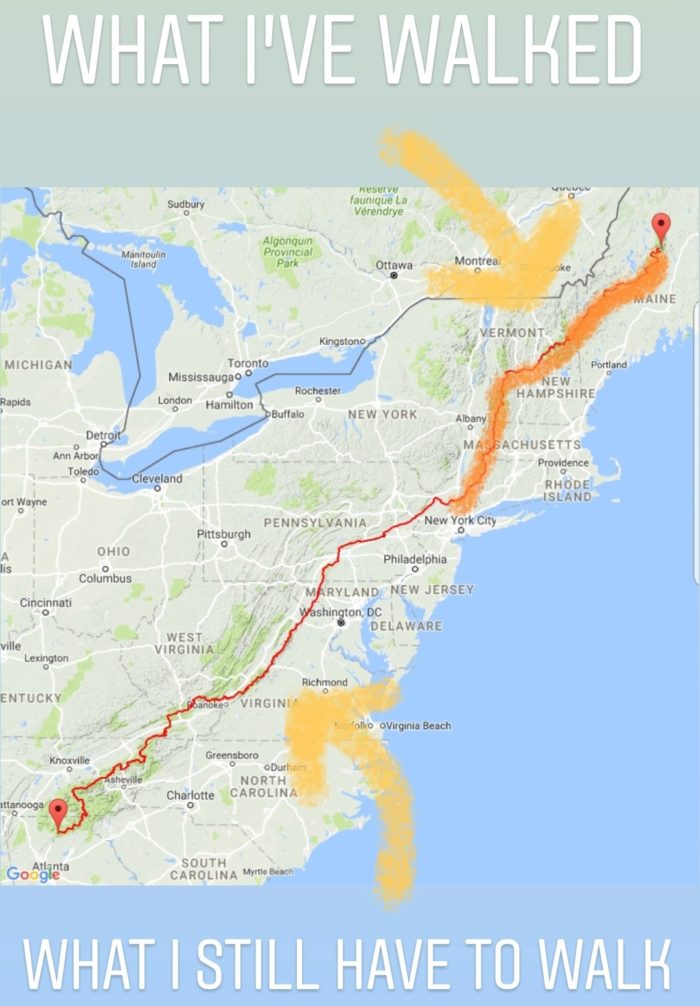 Just a visual for everyone.

The first full day of walking in New York brought me past Tony’s Del,i where I just had to stop for a legendary wrap, finishing with 25 miles to start. I camped outside the RPH Shelter, having caught Cheeto, Dreamer, and about six other SOBOs that had ordered an excessive amount of pizza. So yes, there were actual delivery services within reach. The following day was a 24-mile push to a general store where I couldn’t pass up an order of quesadillas. Cheeto stopped at a food stand on a beach a few miles back, though I’m sure I’ll run into her at some point down the trail as it sometimes goes. You probably get the Central Park idea by now, but hang on, there’s more. 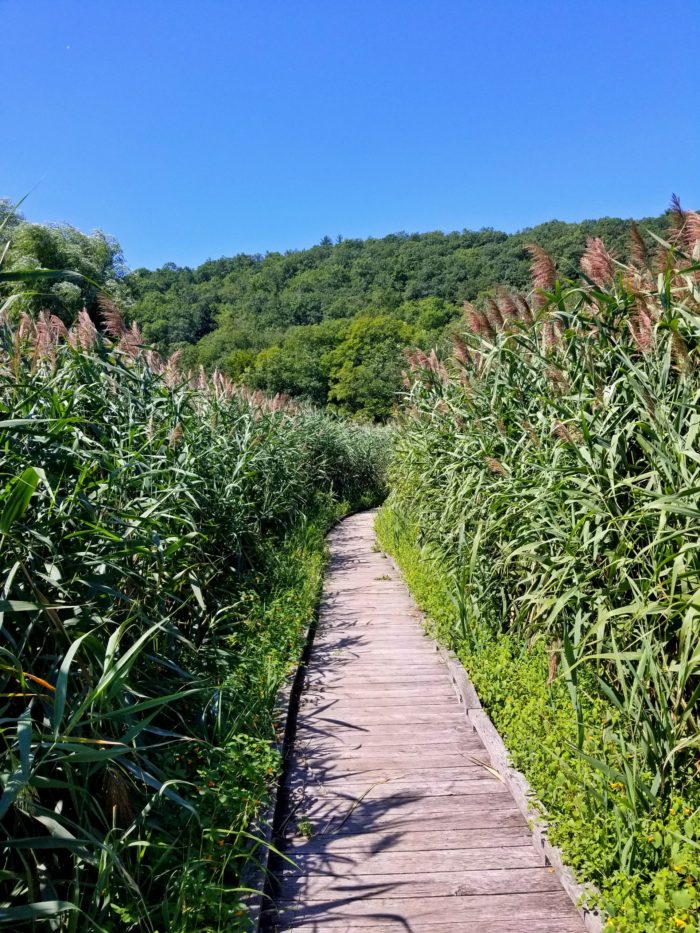 Switching up a trail a bit here.

Aug. 25 we decided to go for a 20-mile day, which normally wouldn’t take all day if it took place in the actual forest… but we had a tourist itinerary. Six in the morning and Dreamer and I were on the trail. It started with a descent that led down to the Hudson River road walk. *A road walk is quite simply a walk on the road that is part of the trail. In case anyone didn’t know – the trail is marked with white blazes on rocks and trees along the way – but on a road walk you’ll find them on telephone poles, bridges, anything concrete really. The bridge was a cool part of the trail! The bridge is busy and you’ve got to wonder what all the drivers think when they pass by. Where are these homeless people going? Perhaps they are aware we really are hikers, but it’s surprising how many don’t even realize their proximity to the trail, let alone such a trail even exists. 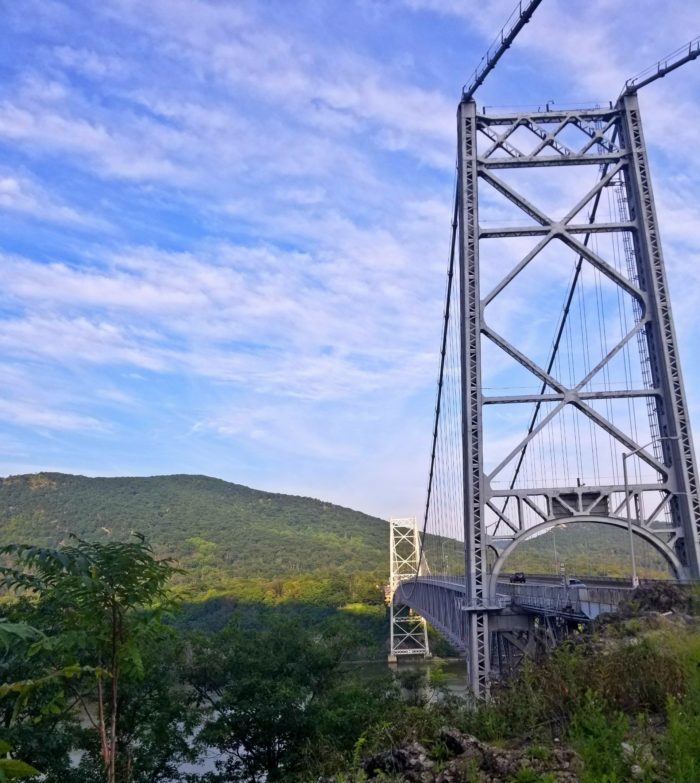 Photo of the bridge. 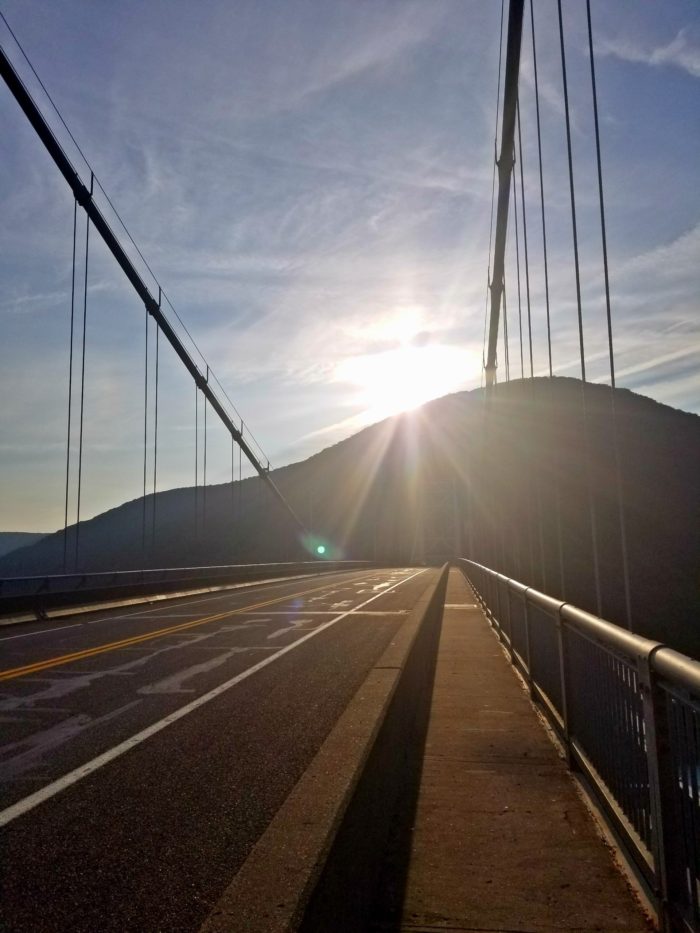 Photo on the bridge. 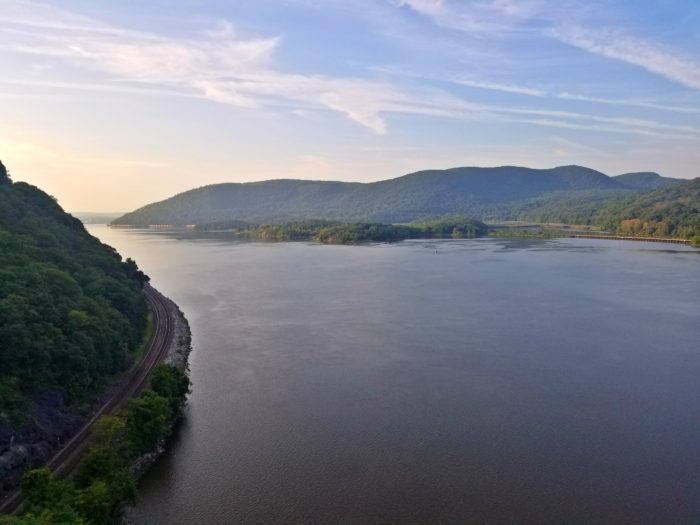 Photo from the bridge.

Just over the bridge was the zoo. The trail actually takes us through a donation-based zoo. It just so happens there is a zoo in Central Park too; see what I mean? Anyway, it was only 8 a.m. and the zoo didn’t open until 10 so we walked an entire mile out of our way to the closest food joint, the Bagel Cafe in small-town Fort Montgomery. Very appropriate for us tourists in New York, as they’re so known for their bagels. We ordered and sat down, and it might have been some freak timing, but we emptied that shop fast. Chances are it was our hiker stench that we’ve come to see as normal. 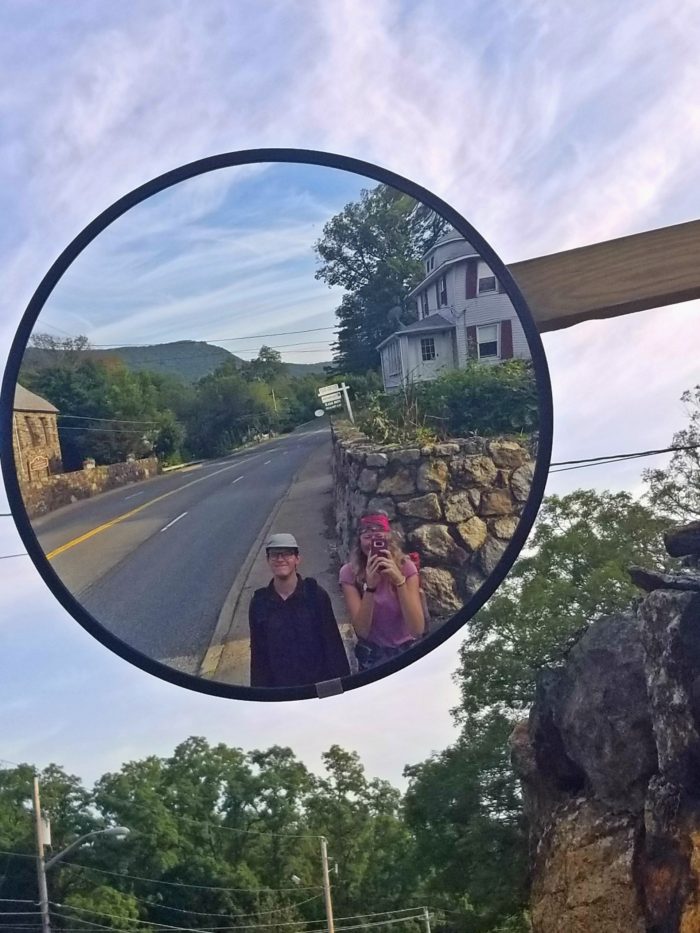 Dreamer and me after some bagels.

A mile back to the zoo we fit in more, where we could try to throw blame on the animals for any whiffs the real tourists caught. I tried to keep my distance but some people just try to push by much too close for their own good. 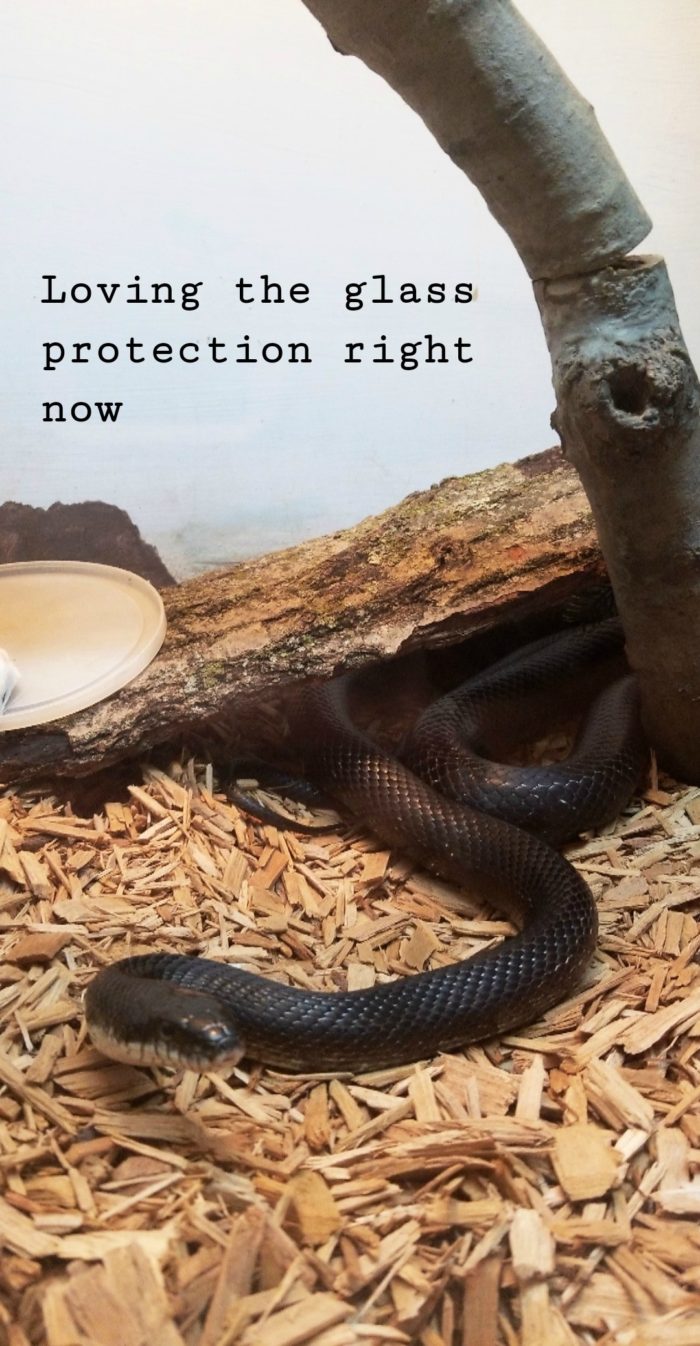 Next up was Bear Mountain. The trail led right through a park by a lake, so we passed hundreds of families out for the day with humongous amounts of food that smelled good enough to continuously salivate for an hour straight. It was our greatest hope that someone would offer us food, but sadly that didn’t happen so we started the ascent. 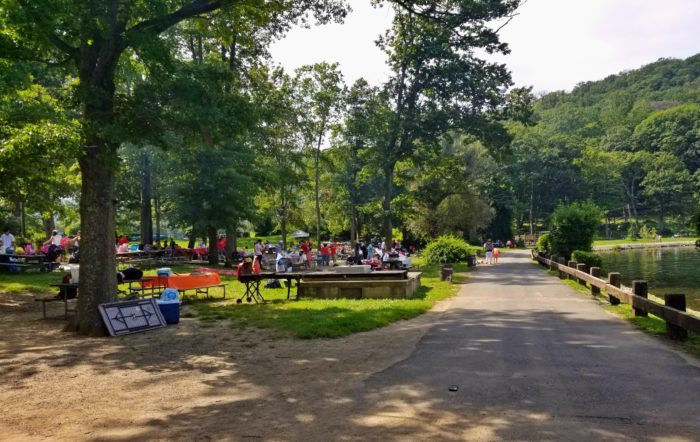 People watching us as we watch them eat.

Bear Mountain is actually a pretty high peak. There were a good number of active people out for day hikes and my competitive nature kicked in. There’s something satisfactory about passing day hikers, while you’ve got a large pack on your back and they’re merely carrying a water bottle. I don’t want to sound all high and mighty and stuff because they sure look better than I do, but it definitely helps push it to the top. There are also day hikers that don’t move over, but I won’t get into that. The top of this particular mountain has a paved road, therefore the top was overpopulated. It’s great that it is accessible to everyone but we didn’t stay long. From the top you could barely see through the haze and humidity, but if you looked hard enough it was possible to spot the NYC skyline, as well as from Black Mountain which came next. 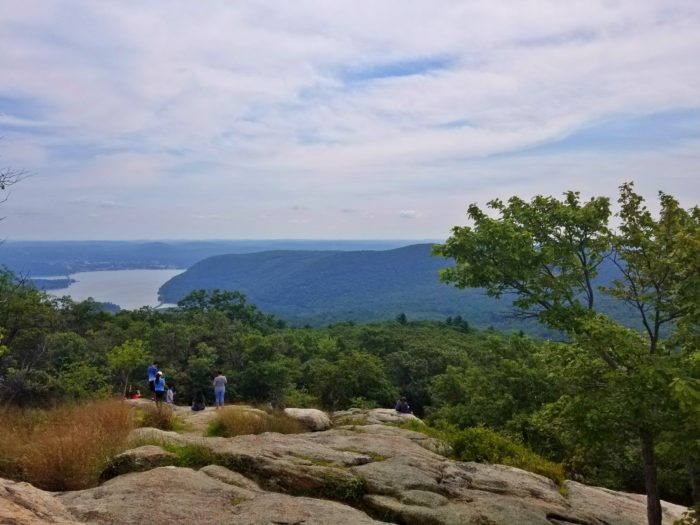 The view from Bear Mountain (NYC isn’t clear enough to see with my phone camera).

After a couple fairly decent ups and downs, we passed through the Lemon Squeezer. This was a jungle gym sort of set-up featuring two rock slabs that were tight to navigate through. Dreamer had his life flash before his eyes when he jumped, tripped, then recovered. Stopping at 20 miles, that was a wrap for Aug. 25, also known as the busiest day thus far. 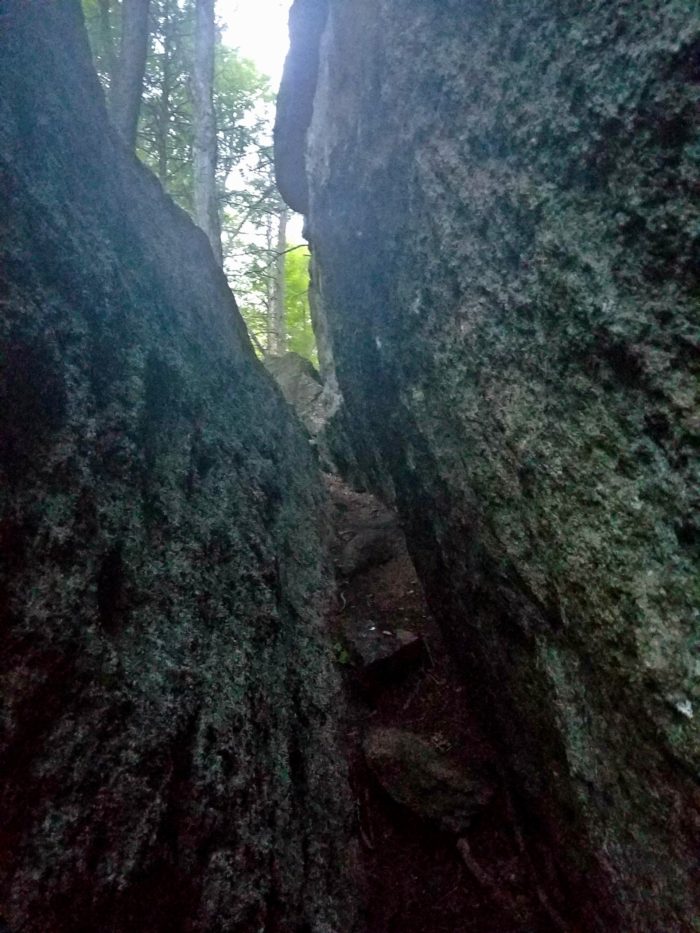 The last day in New York had me feeling like I was exiting Central Park, and with good timing because my bank account had been taking quite the hit. We hitched into Greenwood Lake for some breakfast and a quick resupply. Shout-out to that lady who got her first hitchhiker experience! We finished the day just shy of 20 miles and feet that were not my biggest fan. 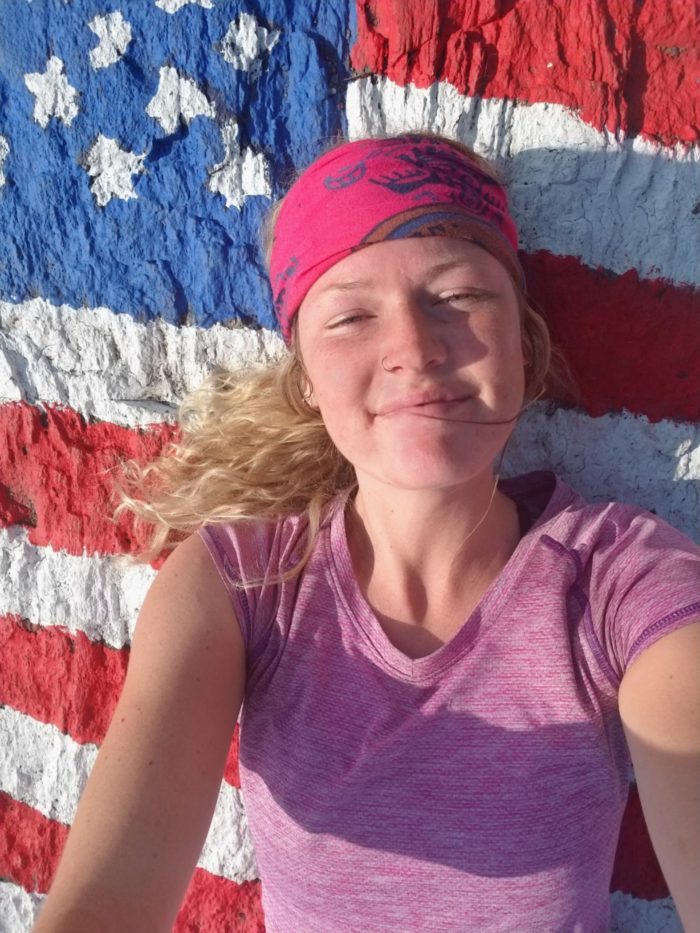 This was on the top of a mountain. Patriotism is real.

I am confident in saying my feet will never be asked to participate in a beauty contest, not that they were possible contestants previous to this, but I’m convinced my pinky toe is disintegrating and will no longer be part of my foot soon. This would be a good thing if it meant the pain would go away, but I don’t think it works that way. To top off my paragraph of complaints, the bugs can’t go unmentioned. New York mosquitoes are brutally horrible and the world would be much better without them. It’s been impossible to stop walking because they attack you in hordes and it doesn’t just stop there. When I get to camp I immediately set up my tent and don’t get out of it until morning. I would rather hold a full bladder for 12 hours than face the mosquitoes. Then, even when I’m safe in my little palace (tent), the itching begins and doesn’t stop. Sleep is impossible between scratching and sweating, because the temperature skyrocketed. I don’t know about Philadelphia, but apparently it’s always sunny in New York. 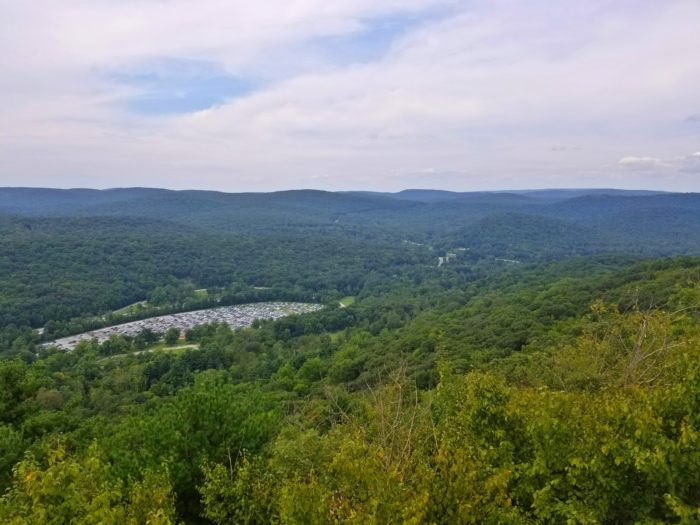 Beauty and a Beast of a parking lot.

Complaint after complaint here has me feeling a little guilty, because it is indeed not quite the chore to be out here. It has its little problems that can sometimes pool together and seem impossible to continue, but in my experience so far it’s all been worth it. I’ll remember these days when I’m packing up a wet tent and walking in the rain and wish I could go back to the heat, but that’s just life. The grass is always greener on the other side, they say, and it’s true sometimes, but overcoming whatever challenge that’s thrown at you is a good measure of personal success out here. 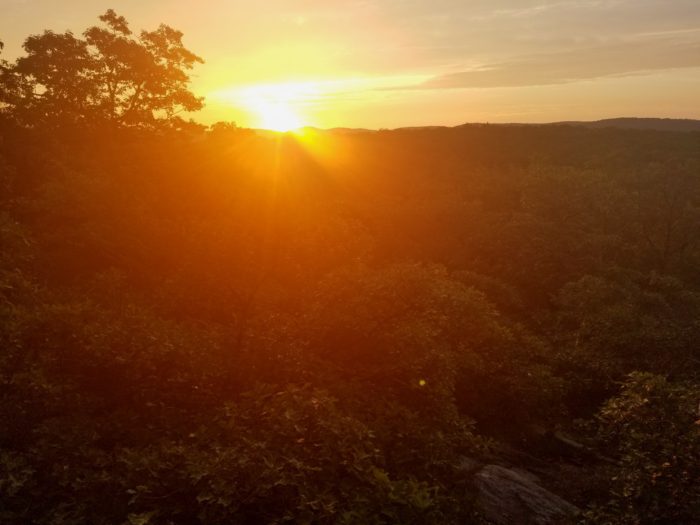 That makes six states down, eight to go! 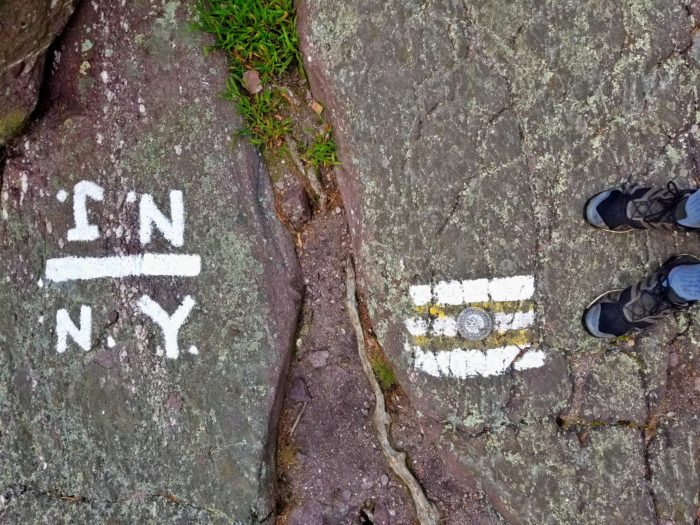