Abandoned food garbage near McAfee Knob is starting to attract bears, according to the Roanoke Appalachian Trail Club (RATC). In a Facebook post on Tuesday, the volunteer trail club posted photos of chip bags and solo cups strewn through the grass, as well as kitchen-sized trash bags and totes full of garbage and an abandoned charcoal grill.

“Yes, we carried that grill out 4 miles,” part of the post reads. “PLEASE help us preserve the natural environment by keeping it natural! PLEASE do not leave large messes for bears or other animals to get into, and for volunteers to clean up.”

Most-Photographed Spot on the AT

The RATC maintains 120 miles of the AT in Virginia, including McAfee Knob. The dramatic, easy-to-access rock ledge is the most-photographed spot on the 2,200-mile Appalachian Trail.

With Dragon’s Tooth and Tinker Cliffs, two nearby scenic points on the AT, it forms the popular Roanoke Triple Crown backpacking route.

All three destinations, but especially McAfee, are wildly popular among backpackers, weekend campers, and day hikers. In this case, RATC says they believe local partiers were probably the source of the mess.

According to Kathryn Herndon-Powell of the Appalachian Trail Conservancy (ATC), visitor use has spiked in the region since COVID began. “We’ve had a lot more first-time novice visitors, but I won’t completely let the more experienced backpackers off the hook either. Certainly, the trash we saw over the past weekend seemed like groups, probably young folks, college folks.”

McAfee Knob is a bucket list destination for students at nearby Virginia Tech, Radford, and Liberty universities. 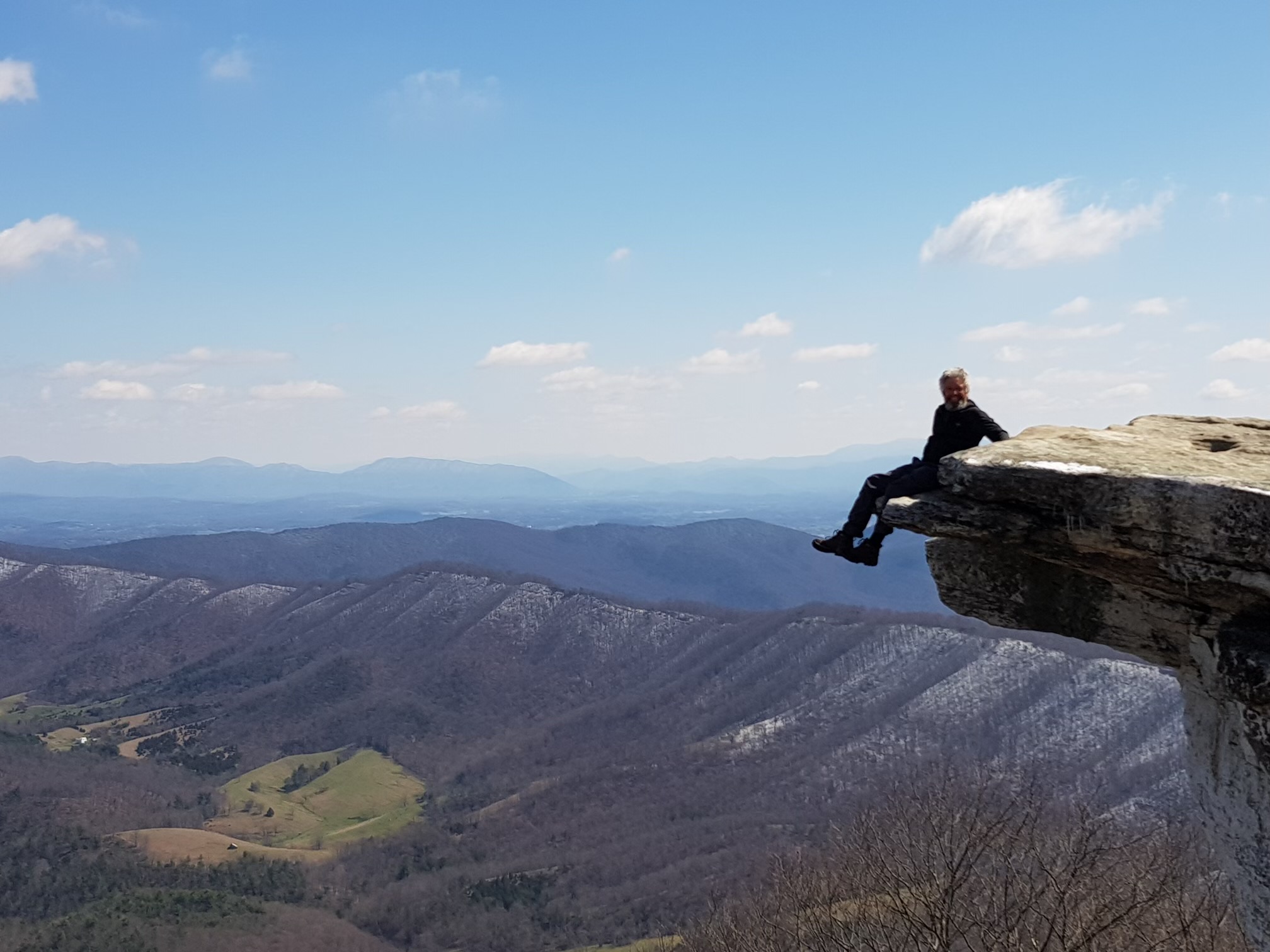 McAfee Knob is the most-photographed location on the AT. Photo via Harvey Howard.

“Over the past weekend, we had three different occasions of a ridge runner or someone else finding a bunch of trash that had been ransacked,” said Herndon-Powell. One of the incidents occurred at a shelter equipped with a bear-proof food locker. Another took place at an illegal campsite. (Camping is only allowed at a handful of designated shelters and tent sites in the area.)

Hikers have also reported two other bear encounters in the area over the past month. That’s a higher rate of wildlife conflicts than the region has seen since the ATC installed bear lockers in the area in 2016. (Note: John’s Spring Shelter is the only one in the area that does not have a bear locker. Hikers should use a bear canister or hang their food, preferably using the PCT method, at this site).

Bear activity has historically been a problem in the McAfee Knob area. In 2016, the situation escalated to the point that a shelter and campsite had to be shut down for about two months. Bears had been persistently entering the sites looking for food, prompting the ATC to install the expensive lockers.

“We put bear boxes at three of the four shelters in the area back then in 2016, and it’s been really effective,” said Herndon-Powell. “We haven’t had a bunch of reports coming in,” at least until the past month when litter and bear encounters have spiked.

Could McAfee Knob Go the Way of Max Patch? 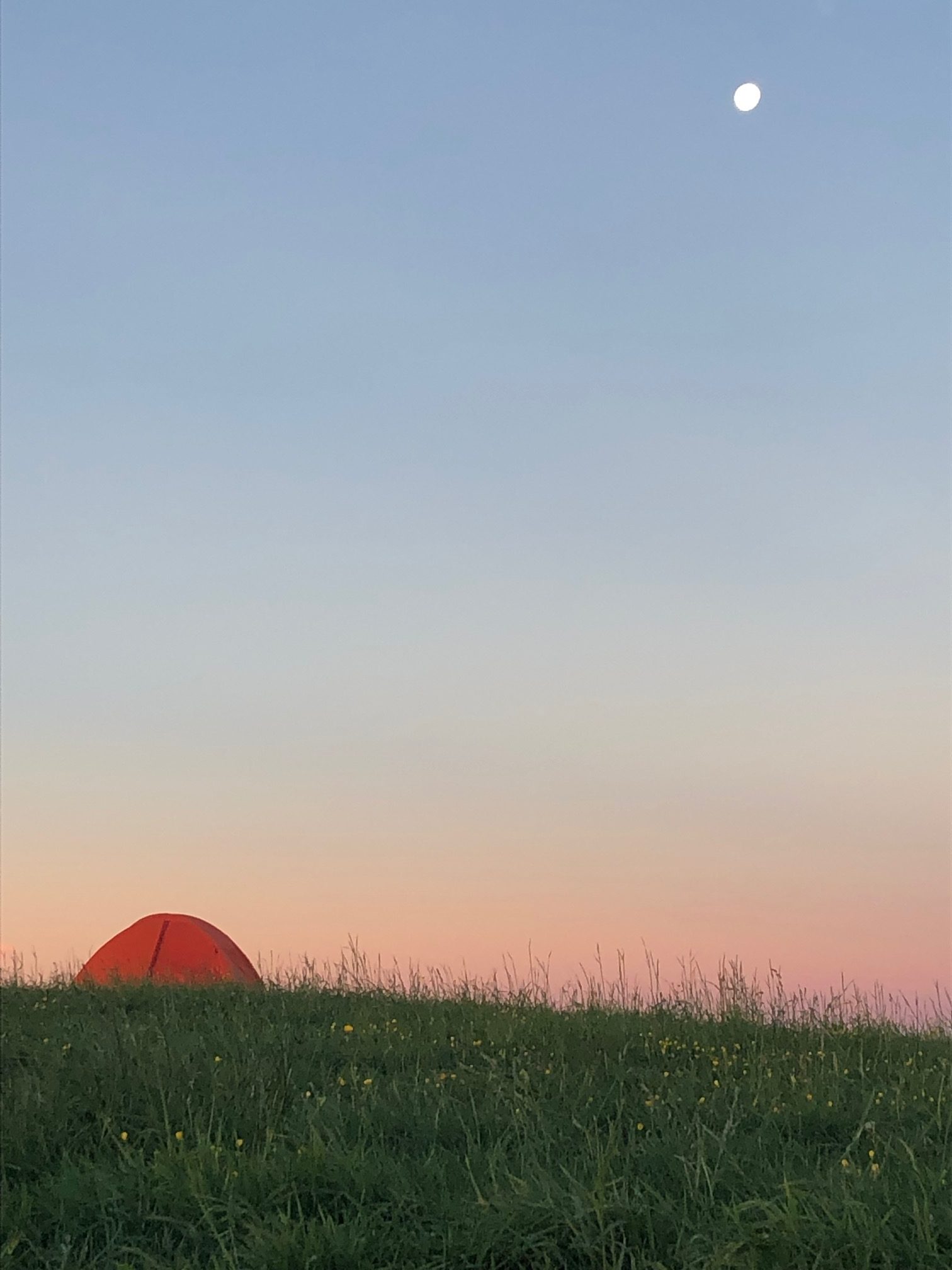 Max Patch in May 2019. The Forest Service has since banned camping on the bald until the summer of 2023.

McAfee Knob’s litter problem is reminiscent of Max Patch on the North Carolina section of the AT. The USDA Forest Service recently issued a two-year ban on overnight stays on the scenic bald to combat overcrowding.

Photos released last year showed a vast network of tents covering the bald, looking more like a scene from a music festival than the Appalachian Trail. The images also depicted social trails, toilet paper, and garbage strewn through the grass.

Pisgah National Forest issued the temporary ban this July to give Max Patch a chance to recover. In contrast, camping in the McAfee Knob has already been restricted for years. Land management agencies have invested heavily in the area to preserve its scenic nature over the years:

Regardless, the Catawba area has struggled to keep pace with the growing number of hikers looking to explore local trails. Among other problems, Herndon-Powell said the region has seen a definite uptick in the amount of trash on the trail recently.

What’s changed and what happens next?

Currently, the ATC is focusing on education and outreach in response to the RATC’s widely shared post. The litter “is not a really concerning situation yet, but we know where it could go, so it just seems like a good idea to get the word out,” said Herndon-Powell. In an effort to reach beyond the hiking community, she has already given several interviews to local news channels about the incident.

The ATC and the RATC also jointly manage a program for volunteer ridge runners who patrol the AT through the area. The program saw as many as 47 volunteers this year. “They’re local folks who commit to doing one weekend day a month or so,” said Herndon-Powell. “So we have a pretty heavy presence between our staff ridge runners, the volunteer ridge runners, and there’s a National Park Service ranger that patrols the area as well. We’re able to do a lot of on-the-ground, in-person education, and that’s helpful. But obviously, it didn’t prevent this from happening.”

When bear encounters got particularly bad in 2016, the ATC shuttered Lambert Meadow Shelter and campsite for about two months. “It’s already an area where camping is restricted… so if we have to close a shelter and campsite that really makes it hard for anybody to hike through,” Herndon-Powell pointed out. “We don’t want to do that, but if bear activity escalates to the point where it’s unsafe, then that’s the easiest way to make sure we’ve cut off the source of human food.”

A Fed Bear is a Dead Bear

“Littering and improperly storing your food when recreating in the backcountry allows bears to be more attracted to these areas, because they know they can get an easy meal. This causes bears to frequent these areas and be more comfortable around humans, which can lead to deathly situations for the visitors and the bears,” RATC’s Facebook post explains.

Bears that learn to associate humans with food typically must be relocated at great expense or euthanized. This is because they may endanger recreationists by entering campsites and approaching them seeking food.

READ NEXT – Black Bears and Thru-Hiking: Your Questions Answered

The RATC urges hikers to follow Leave No Trace principles, including storing food properly and packing out all garbage. All designated campsites in the area have food lockers, making proper storage easy. You can also keep food in an approved bear canister or hang it in a tree. “PLEASE help us preserve the natural environment by keeping it natural,” the post implores.

Bears have a very keen sense of smell. You should store all smellable items—not just food—in a canister, locker, or bear hang overnight. This includes scented toiletries like chapstick and lotion.

If a bear enters your camp, throw rocks and make loud noises to scare it away. Don’t run, play dead, or turn your back on the animal.