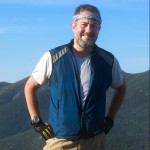 “The town is that way”

The Via Rail Canada Atlantic train glides to a stop. I stand with the porter in the vestibule between the cars. I have just arrived from my university town of Fredericton N.B. on Canada’s east coast. My bulky Jansport frame pack is at my side and I’m wearing my “going into town” clothes and my brand new Vasque Sundowner boots. With a hiss and crash the train stops and the porter opens the door onto a completely dark level crossing. There is no station.

I drop my pack out the door, jump down and step away from the tracks. As the train pulls away the porter leans out of the train, holding on by one hand. He points and calls out “The town is that way”. The train recedes off into the distance over a bridge and is gone. Much like the pig compared to the chicken when it comes to breakfast, I’m committed. I trudge into town.

Whose idea was this anyway?

To this day I’m still not really sure where the idea to hike the whole AT came from. I was an avid Scout all through school and camped out nearly every weekend, fall and winter, throughout my high school years. Mostly just a boy’s club, we refurbished an old log cabin, cooked canned beans over fires, farted and told fart jokes. During nearly 10 years at university I did little hiking and yet when the opportunity arose to take a long trip I somehow went back to those years and chose backpacking.

Pre-internet, very little information was available on the AT. The Appalachian Trail Conference at Harper’s Ferry, fronted by the ever-reliable Jean Cashin, was one source so I licked some stamps and wrote for their catalogue which I poured over. A US dollar postal money order later I got back a big box which included a full set of guides and maps plus the 1986 Data Book and Darrell Maret’s Philosopher’s Guide.

Gear? A local outdoor store, going out of business, supplied my pack, boots, Optimus 323 white gas stove, one of the new fangled Thermarest mattresses, a Peter Storm rain suit, Lifa base layer and a one man bivy tent. The rest of my gear was cobbled together from things I already had including a bathing suit as shorts. Fitness? University cross-country team training and not putting a backpack on for 10 years. Check.

Not surprising, Mattawamkeag was closed when I got there. My sleep-deprived solution was to hide in the woods until it opened, find a motel and wait for my brother Colin (hiking the 100 mile wilderness with me) to arrive by train from the opposite direction. Three hitch hiking rides the next day and a visit to the park headquarters to get a campsite and we were at Roaring Brook. The plan was coming together.

As a purist, my thinking was to approach the beginning of the trail on Katahdin’s summit from the north via Helon Taylor and the Knife Edge. Fully loaded on a flawlessly clear, and hot, summer day we began our hike at 8:45.

Now picture a bus with the wheels coming off on a high mountain road. Fill it with sunburned Canadians to get the full picture. Five hours after we begin we summit Pamola Peak, still over five miles from Katahdin Stream Campground across the Knife Edge with the Big K descent to look forward to. Marrying a cursory look at the map with a vast lack of trail knowledge we opt for what seemed to be the best option which is to backtrack down to Chimney Pond via the “conveniently” short 1.3 mile Dudley Trail.

Huge mistake! My first of many lessons to come in mountain trail physics. A 2500’ descent in 1.3 miles = steep. Later reading of the guidebook description of the Dudley Trail found “Do not descend with a pack”.  Beaten and dehydrated after lots of hand lowering of packs we arrived three hours later at Chimney Pond Campground. Time for Plan B.

Bruised but wiser, things calmed down after that. The next day we worked around the park to camp at Katahdin Stream. With a very early start (and carrying day packs), we summited the Big K on July 3, 1986 at 10:15.  Huzzah! Surrounded by low clouds, entirely alone and wind swept we took pictures of each other, ate lunch and began the walk back south. Two days later, we restocked our diminished supplies at Abol Bridge and walked into the 100 mile wilderness.

My life would never be the same again.