Alphabet Soup: NOLS and the AT 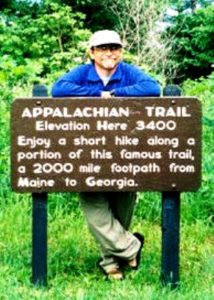 On the AT in SNP

Anyone familiar with the Appalachian Trail will eventually refer to it as the AT. Similarly, those of us who spend time hiking and backpacking no longer refer to where we buy our MSR stove and other gear as Eastern Mountain Sports or Recreational Equipment Incorporated but as EMS and REI. Rather than spelling out Shenandoah National Park we might jot down SNP.  Sometimes our shorthand acronyms and abbreviations can sound like alphabet soup to the uninitiated. In this post, the first in a series of three I am calling Alphabet Soup, I reflect on NOLS and the AT. In future posts I will write about LNT and WFA.

The first time I set hiking boot on the AT was the summer of 1979.  I and my co-counselor from a church camp north of Pittsburgh, PA were leading four senior high females on a weeklong backpacking trip southbound on a section of the AT in PA near Swatara Gap. I had been asked to co-lead the trip even though I had no formal trip leader training. There was not much training available back in those days. The camp director, a NOLS (National Outdoor Leadership School) alum, had asked me to lead the trips based on my having previously backpacked in WV’s Dolly Sods Wilderness, solo hiked the entire length of Western PA’s Laurel Highlands Trail, and successfully a similar co-ed senior high backpacking trip to the High Peaks Region of the Adirondacks the summer before.

Having co-lead teenagers on two weeklong backpacking trips, but with no formal training, and wanting to lead similar trips in the future, I thought I ought to acquire some formal training sooner than later.  Thanks to the prodding of the camp director, a few weeks after my first AT trip, I wound up backpacking through WY’s Wind River Range in the Bridge National Forest on a NOLS Outdoor Educators Course.

As a NOLS alum I am a little biased, but I think NOLS is “the leader in wilderness education.” NOLS is not a survival school, and unlike some organizations which seek to “help people discover and develop their potential to care for themselves, others, and the world around them through challenging experiences in unfamiliar settings,” NOLS simply seeks to teach “technical outdoor skills, leadership, and environmental ethics.”

A few years after my NOLS course I worked as a trip leader with an adventure summer camp near the Delaware Water Gap, The AT was almost within walking distance of the camp, and in addition to canoeing down the Delaware River, engaging in a little rock climbing and some spelunking, we also took our junior high campers backpacking on the AT in NJ. Those AT trips were the second time I had ever backpacked our beloved trail, and I felt that what I learned and experienced on my NOLS course made me a safer and more knowledgeable trip leader.

I will never forget the AT trip when, after a few days of teaching our campers how to use a map and compass, how to set up tarps, and use stoves to cook, the second to last morning on the trail my co-leader and I dumped all our group gear on the campers, showed them on the topo map where to find Sunfish Pond and then said we would meet them there the next morning. Of course my co-leader and I  kept our campers in sight even though we stayed out of sight. We were pleasantly surprised later that day when they found their way to Sunfish Pond, set up camp, fed themselves, and slept through the night. I am not sure I would have been able to teach those skills if it had not been for my NOLS course.

The next time I backpacked the AT was a few summers later. I was again co-leading a weeklong senior high backpacking trip, but this time it was for a church camp in Western NC and on a section of the AT in NC. We were heading southbound toward the Nantahala River Gorge, where, on our last day, we would enjoy some white water rafting. I recall that even though we were backpacking during the summer, we got caught in an afternoon rain during which the temperature dropped. Two petite females who appeared not to have an ounce of body fat, chilled from the rain and unseasonably cool temperature, stated exhibiting early signs of hypothermia. Since we were not far from an AT shelter, we made our way there to get out of the rain, fired up the stoves, and made hot drinks for everyone. We had the two females discretely change out of their wet clothes into dry ones. The rain eventually stopped, the two females warmed up, and we hiked on to our planned destination. Once again, I think it was my NOLS training and experience that helped me respond in that situation.

The following summer I was again leading a weeklong senior high backpacking trip for the same camp, but this time we hiked the AT northbound into the Nantahala Gorge where we again enjoyed white water rafting on our last day. I do not recall any dicey situations from that trip, but if we encountered any, I am certain I would found my NOLS training and experience helpful.

That trip on the AT north toward Nantahala Gorge was the last time I was employed to lead others backpacking on the AT or anywhere else, but it was not the last time I was on the AT or relied on my NOLS training and experience. Even if I am simply day hiking along the AT in SNP, I feel more confident and mentally prepared to meet almost any challenges, and through planning and preparation better able to avoid getting into dicey situations. That means I am more able to enjoy myself on the AT while also helping to preserve and protect it by limiting my impact upon on it.

Not every AT thru-hiker or day user can take a NOLS or similar course. Many schools, clubs, businesses and organizations, however, now offer training and courses about orienteering, camping, backpacking, trail cooking, and so on. There are certainly more such offerings than when I started backpacking many years ago. Just about anyone heading out onto the AT now has the opportunity to learn or refine his or her technical outdoor skills and environmental ethics before hitting the trail. Doing so will increase your own safety and enjoyment on the AT, contribute to the well-being and satisfaction of those you are with, and help preserve and protect the AT we love.